Some 2500 years ago on the south-west coast of Sicily there existed a vast city inhabited by more than half a million people. Originally known as Akragas, this city was one of the highlights of Ancient Greece which lies just south of the modern-day city of Agrigento. Today this magnificent World Heritage Site is better known as the Valley of the Temples and is the main shore excursion for cruise ship visitors arriving in the nearby port of Porto Empedocle. Other popular attractions include the Turkish Steps and Roman Villa which are located just a short ride to the west of the port near Realmonte.

Cruise ships scheduled to visit Agrigento actually dock at Porto Empedocle which lies 10km south-west of the city by road. The cruise terminal is located within walking distance of the port town but there is little to detain visitors here. Most passengers head off on official shore excursions to the nearby Valley of the Temples or take taxi tours to these Ancient Greek ruins. Whilst public buses do run to Agrigento it’s more convenient to take the hop-on, hop-off Temple Tour Bus which has itineraries covering all the area’s main attractions.

Overseas visitors to Sicily generally arrive at the airports of Palermo or Catania which both lie approximately two hours away from Agrigento and its port. Bus services operate from both airports to Agrigento and there’s a train from Palermo. However, cruise ship passengers transferring between these airports and Porto Empedocle will find private transport with Shuttledirect to be a far more convenient option. Their specialist airport transfer services operate from both Catania Airport and Palermo Airport to destinations all over the island. 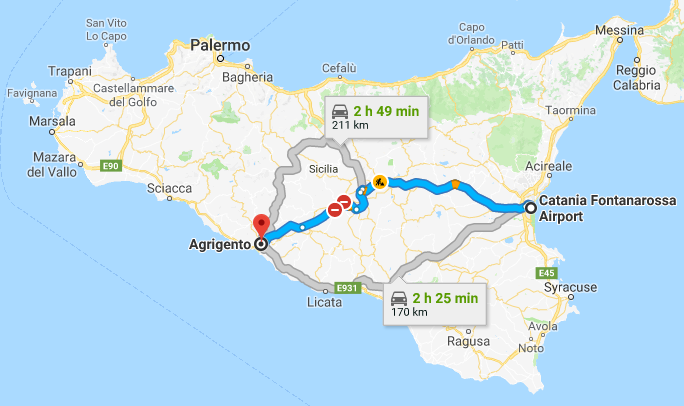 Valley of the Temples: Lying just 7km east of the cruise port this World Heritage Site represents the finest collection of Ancient Greek architecture in existence outside of Greece. This enormous archaeological site still remains largely unexcavated yet the temples on display dating back to the 6th century BC are a sight to behold. One of the best preserved is the Temple of Concordia which is reminiscent of the Parthenon which stands on the Hill of the Acropolis in Athens. Cruise ship passengers can visit the site on excursions provided by cruise lines or simply hire a local taxi from Porto Empedocles. There are also bus services which run from Porto Empedocle to Agrigento bus station from where local buses go to ‘Valle dei Templi’. Cruise ship passengers who like to take hop-on, hop-off bus tours at their ports of call will find the Temple Tour Bus to be excellent value.

Word of Warning: Daytime temperatures typically reach more than 30°C (86 F) during the summer months and there’s little shade at the site. It is recommended that you try to visit as early as possible, carry plenty of water and wear comfortable walking shoes. 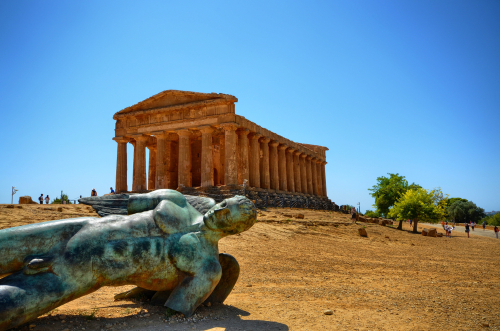 City of Agrigento: The modern-day city of Agrigento which lies just 3km north of the Valley of the Temples is also worth a visit if time permits. Its historic centre is home to a number of historic attractions including the 11th century Cattedrale di San Gerlando (Piazza Don Minzoni) and the charming Chiesa Santa Maria Dei Greci (Salita Santa Maria dei Greci) which was built on the site of an ancient Greek temple. The Archaeological Museum of Agrigento (Contrada San Nicola, 12) displays many Greek artifacts excavated from the surrounding region and is highly recommended for visitors wanting to learn more about the history of the Valley of the Temples. Cruise ship passengers lucky enough to arrive in port on a Friday should make a point of visiting the city’s weekly market.

Insider Tips: As you wander around Agrigento you’ll come across a wide selection of attractive restaurants with a typical Mediterranean feel. Highly recommended for a simple lunchtime pizza is the family-run Gustissimo (Via Imera 225) on the northern edge of town. For a more centrally located and upmarket option try La Scala (Via Atenea 72) which serves up some of the city’s finest Italian cuisine.

Stair of the Turks: If a visit to the Ancient Greek temples on a scorching hot Sicilian day isn’t appealing, you might prefer to simply head 5km west of the port to Scala dei Turchi. This well-known rock formation is a popular local attraction lying between two sandy beaches. On the way back to the port it’s well worthwhile stopping off at the Villa Romana di Realmonte (Via Nereo, 21) archaeological site which dates back to the first century AD. Unfortunately, there are no public buses from Porto Empedocle to Scala dei Turchi so you need to get off in Realmonte then walk about 3km to get there. Alternatively, the Temple Tour Bus from the port has a stop at the Scala dei Turchi. 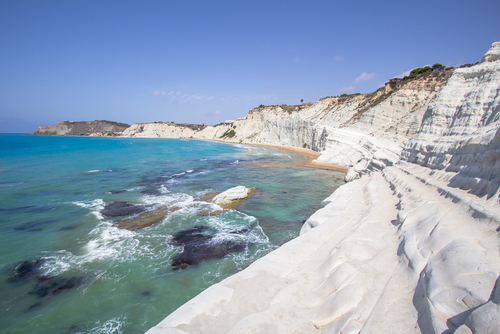 Shuttle Direct is the most established and respected airport transfer provider in Europe and northern Africa. Our friendly local drivers will ensure your safe, economical, and convenient passage to and from the cruise terminal, airport, or major train station of your choice with a minimum of fuss. Book your transfer.