The city of Bari in south-eastern Italy has long played an important strategic role in the Adriatic Sea. Today it is the capital of the Italian region of Puglia (Apulia) which is well known for its historic hill towns, beautiful coastline and exquisite regional cuisine. For many cruise ship passengers this relatively unknown destination proves to be a pleasantly surprising port of call. Within a short walk of the cruise terminal visitors can wander into the city’s historic centre where life goes on as it has done for centuries. A number of key sights reside in this old town otherwise shore excursions are available to several interesting attractions including the UNESCO World Heritage Site of Alberobello which is famous for its cone-roofed ‘trulli’ buildings.

The main activity of the busy Port of Bari is dealing with the large volume of international ferry services which sail to Croatia, Montenegro, Greece and Albania. Cruise ship arrivals dock just a short distance to the north of the historic centre of the city where a modern cruise terminal has been built to cater for the ever growing number of ships adding Bari to their Eastern Mediterranean and Adriatic itineraries. 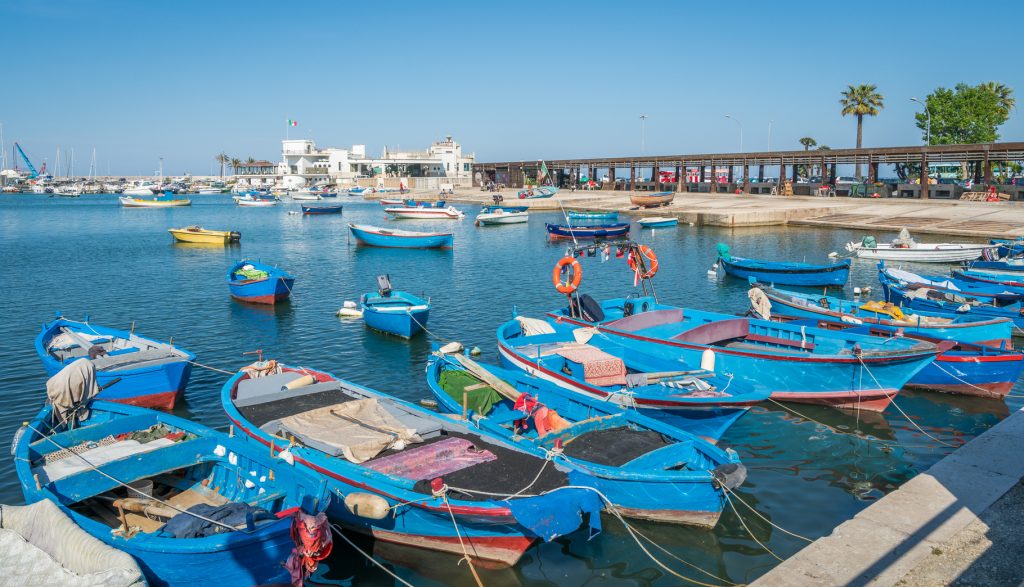 Passengers can take a shuttle bus or walk into the old town from the cruise terminal. Once in town all of Bari’s main sights are accessible on foot otherwise you can take a 90 minute tour of the city on the mini-sightseeing trains (Trenino Turistico) which wait for new arrivals at the port gates.

Passengers who are meeting or departing from their cruise ship in Bari will most likely be travelling through Bari Karol Wojtyla Airport which lies some 15km west of the port. The airport deals with international flights from all over Europe including services offered by some of the best known budget carriers such as easyJet, Ryanair and Wizz Air. 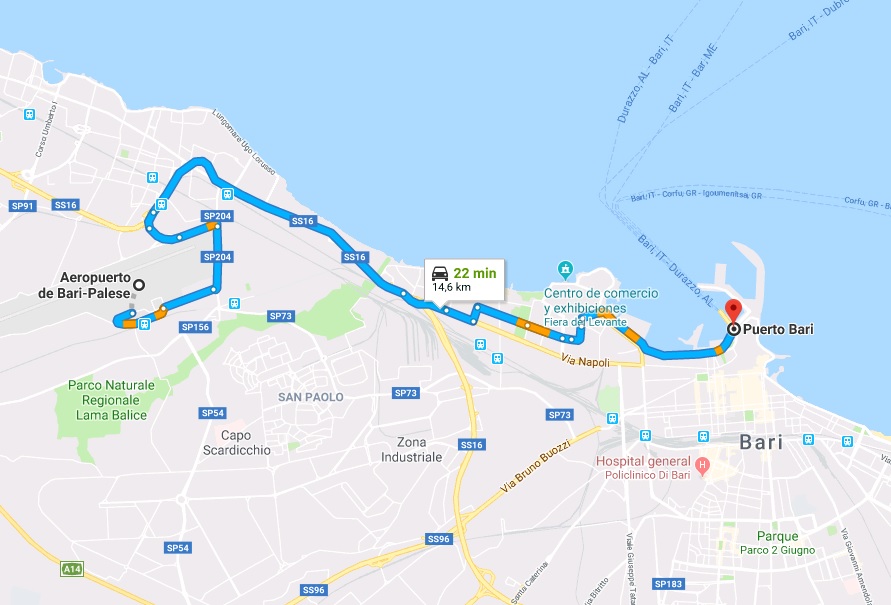 Public transport is available from the airport to the centre of Bari by means of Amtab Bus (Line 16) or by train to Bari Centrale train station. Taxis are easily available from outside the arrivals area otherwise you can pre-book a private transfer from Bari Airport to the port or city centre with Shuttle Direct.

Standing on a peninsula between two modern harbours in the north of the city is the Old Town (La Città  Vecchia) which is a warren of narrow streets where most of Bari’s main sights are located. Founded in the 11th century to hold the relics of Saint Nicholas, the Basilica di San Nicola is the city’s main tourist attraction. As a Roman Catholic and Orthodox Christian church it is an important destination for pilgrims with many arriving from Eastern Europe.

The other main religious building in the heart of the old town is the Cattedrale di San Sabino which was originally built in the 11th century before it was destroyed by William the Evil. Today’s structure was completed in 1292 in classic Romanesque style.

Insider Tip: The old town of Bari is not merely a tourist area, but rather a living community where you’ll see local people going about their daily lives. A great place to have lunch is in and around the food market just to the west of the cathedral. Here you can enjoy typical local street food sold by local vendors as well as delicious pizza-style snacks from any number of traditional bakeries. 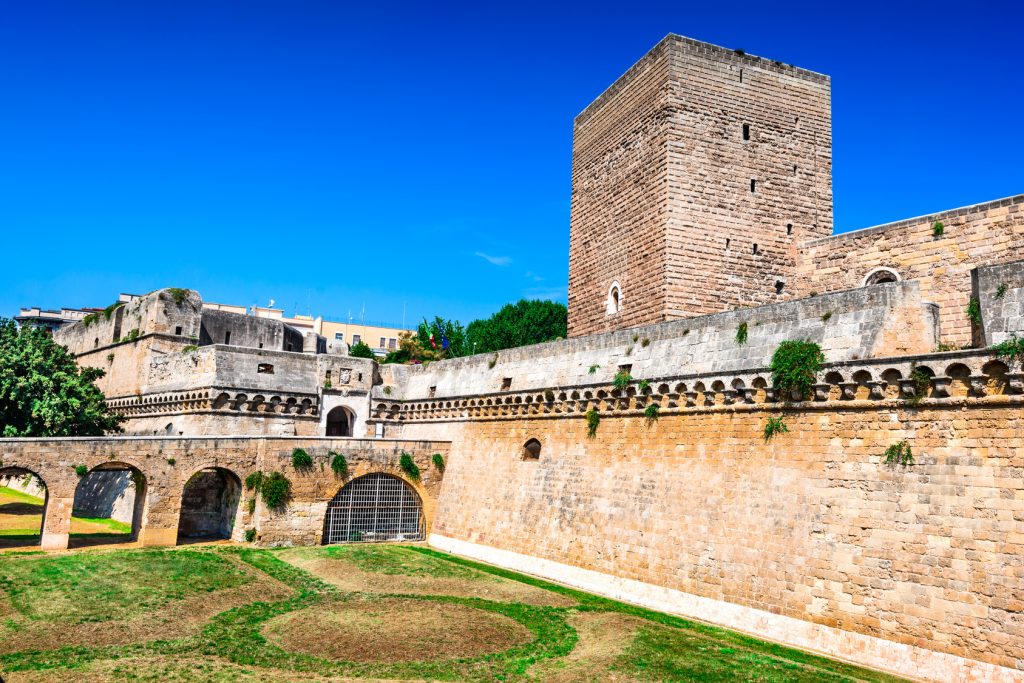 Just west of the cathedral is the 12th century Castello Normanno-Svevo which is impressive from the outside but offers little to see inside. The southern perimeter of the old town is marked by the Corso Vittorio Emanuele. Once you cross this beautiful boulevard you are in the New Town which is the commercial centre of Bari. Visitors who enjoy the opportunity to do some shopping during a day in port will find a fine selection of high quality stores in this part of town.

Whilst cruise ship passengers can happily spend a few hours wandering around the historic quarter of Bari, there is one particular shore excursion which comes highly recommended. Located 70 km. south-east of the port lies the charming town of Alberobello which is famous for its dry-stone structures with conical roofs known as ‘trulli’. These iconic buildings of the Puglia region date back to the 16th century and were typically used as shelters or storehouses. Nowadays many have been converted into holiday homes which are popular with foreign visitors. Many cruise lines will offer their own excursions which include a visit to Alberobello. Otherwise you can take a train or bus from Bari which takes around 1.5 hours each way. Taxis from the port are a quicker and more convenient option which offer reasonable value when shared amongst four passengers. 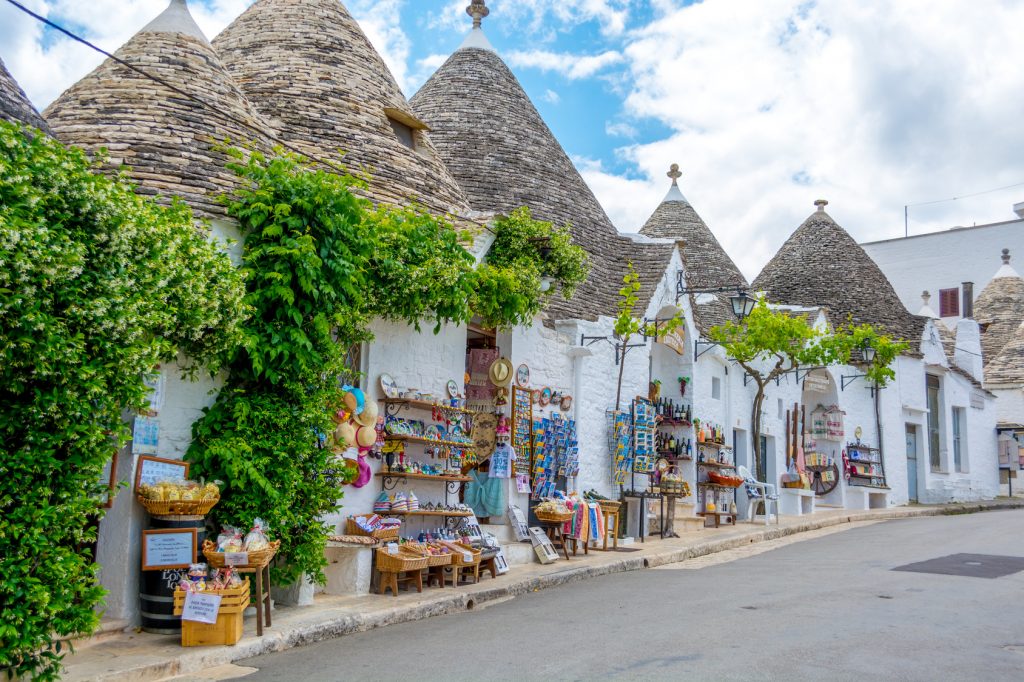 The other main excursion from Bari is to the charming beach resort of Trani which lies 45 km. along the coast to the north-west. Its 13th-century fortress is a reminder of the importance of this sleepy town during the Middle Ages when it was an important maritime trading port. Other significant attractions include the 13th century Scolanova Synagogue and the 11th century Trani Cathedral. Other regional attractions which may be included on scheduled shore excursions from the port are the Roman ruins at Canosa di Puglia and the Venetian trading post of Monopoli.