The city of Bayonne (Baiona in Basque) on the south-west coast of France has a rich history dating back to the 4th century when it is known to have been home to a Roman military camp. Following this period the city was occupied by a people known as the ‘Vascones’ who are ancestors of the present-day Basques. This rich heritage is celebrated every summer at the Fêtes de Bayonne when more than a million visitors arrive in the capital of the French Basque Country to attend what is France’s largest annual festival.

Lying just 8km east of the popular holiday resort of Biarritz, the city stands on the confluence of the Nive and Adour rivers. Cruise ships dock close to Grand Bayonne to the west of the city from where passengers can walk to the city’s magnificent Gothic cathedral before crossing a bridge over the Nive into the traditional Basque quarter of Petit Bayonne. Local shore excursions can be taken to Biarritz and Saint-Jean-de-Luz or to more distant destinations such as Lourdes, San Sebástian or Bilbao.

Cruise ships heading for Bayonne enter the Adour River to the north of Biarritz before sailing upriver to Quai Edmond-Foy which is just a 15-minute walk from Bayonne Cathedral in the centre of the Old Town. During inclement weather the port also welcomes some vessels which were scheduled to arrive at the port of Saint-Jean-de-Luz which lies some twenty nautical miles to the south-west.

Transfers from Biarritz Airport to Bayonne

The most convenient airport for passengers who are meeting a cruise ship in Bayonne is Biarritz Airport which lies just 8km south-west of the Quai Edmond-Foy cruise dock. Bus number 14 from the airport runs to Gare de Bayonne train station otherwise passengers can take Bus C to the centre of Bayonne. Public taxis are easily available or private transfers can be pre-booked from Biarritz Airport to Bayonne. Other airports lying further afield which deal with a lot more incoming flights than Biarritz include Bilbao (150km) and Bordeaux (185km). Shuttledirect can provide transfers from both of these ports of entry.

Getting Around in Bayonne

From the dock at Quai Edmond-Foy cruise ship passengers can easily walk into the heart of the Old Town where the cathedral is located then cross the River Nive into the cultural quarter. Taxis and minibuses congregate near the dock to take new arrivals on shore excursions beyond the city.

Passengers who are planning on visiting Biarritz or Saint-Jean-de-Luz by train will need to cross the Adour River to get to the Gare de Bayonne train station via the Pont Saint-Esprit bridge. Services going south along the coast go as far as Hendaye on the Spanish border where passengers must change train if continuing on to San Sebastián or Bilbao.

The city of Bayonne is divided into two neighbourhoods by the River Nive. To the west lies Grand Bayonne and to the east is Petit Bayonne. The two neighbourhoods are connected by bridges which allow cruise ship passengers to easily wander between the two:

Grand Bayonne: From the cruise ship dock at Quai Edmond-Foy passengers can walk beyond the Botanical Gardens (Allée des Tarrides) and the Château Vieux (Allée de la Poterne) into the heart of the city which is dominated by the magnificent Cathédrale Sainte-Marie (15 Rue des Prébendes). This 14th century Gothic structure is Bayonne’s main tourist attraction which stands on a hill overlooking a warren of medieval streets. Amongst these streets is Chocolat Cazenave (19 Rue Port Neuf), a local institution which has been producing delicious chocolate items since 1854 in what is generally regarded as France’s chocolate capital. 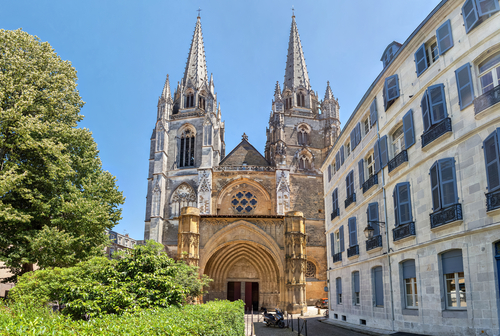 Insider Tip: As well as being famous for producing chocolates, the city of Bayonne is also well-known for its cured ham. A lovely place to try a selection of local hams and cheese is at the upmarket Restaurant Bakera à Bayonne (15 Rue des Tonneliers). Just look for ‘Ardoise de Charcuteries’ on the menu.

Petit Bayonne: Walking across the River Nive leads visitors into the city’s Basque quarter which is home to the city’s two main museums. The excellent Musée Basque (37 Quai des Corsaires) is dedicated to the history of the Basque culture whilst the nearby Musée Bonnat (5 Rue Jacques Laffitte) is one of the finest art galleries in south-west France. It contains works by local painter Léon Bonnat as well as ones by Francisco Goya, El Greco, Rubens and Sandro Botticelli.

Most first time visitors to Bayonne arriving by cruise ship will be happy enough spending their day wandering around this charming Basque city. Alternatively, there are nearby attractions which can be reached by train or on an official shore excursion such as Biarritz or Saint-Jean-de-Luz. 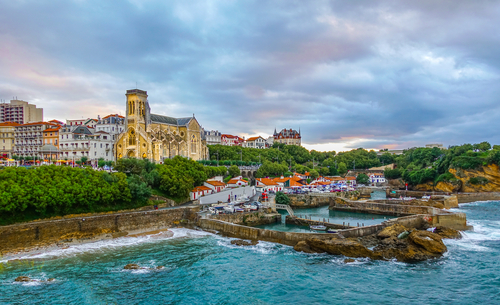 Further afield is the Catholic pilgrimage centre of Lourdes which attracts more than six million visitors per year. Taking a private tour or an excursion offered by the cruise line is the only realistic option for getting there during a short time in port as the town lies 150km south-east of Bayonne. Other destinations to consider travelling by means of pre-arranged transport include the beautiful Spanish city of San Sebástian or even Bilbao which is home to the magnificent Guggenheim Museum.