Picture Spain – not just the cheap lurid cocktails and expat fry-up cafes, but the real Spain that was there before the package holiday was invented, and what do you see? Terracotta colours, flamenco, bullfighting even: you’ve just pictured Seville. Lonely Planet’s best city to visit in 2018 is a seductive, culturally fascinating place, whose patchwork history of conquest is evident straight away in its Roman, Moorish and medieval Spanish architecture.

Nowhere can travellers see these influences more clearly than in the city’s churches – long the storehouses of art, history and wealth in Spain, the Catholic faith has left an indelible mark on the Andalusian capital, dominated by the massive Gothic cathedral. These venerable buildings also a great place to escape the baking heat of the late peak season.

It’s possible to tour all Seville’s old town and see its most enthralling sights by taking in a tour of its churches. Here’s the itinerary I’d recommend to do it all in a day, leaving the rest of your city break free for siestas, fine food and passionate nightlife.

A historically very pious place often has the vestiges of much older pagan traditions. As an Irishman, I know this better than most – the Celtic peoples’ old reverence for nature goddesses morphed into a cult of the Virgin Mary in local forms of Christianity, something we share with Catholic Spain. This mustard-yellow church contains the star of Holy Week (Semana Santa), a stunning baroque statue of Mary, which is carried through the thronged streets during the annual procession.

Here, the statue is on permanent display (despite, legend has it, a seventeenth-century assault by a Protestant’s wine bottle that left a permanent stain on her cheek, and a Civil War attempt to burn the church). The rest of the Basilica is pretty jaw-dropping too, ornate Arabic influences everywhere – and outside stands the longest remaining section of the twelfth-century Almohad city walls.

Well, convent actually – and the nuns are still here. This fifteenth-century edifice’s fine colonnades and the archways in its central courtyard evoke a much earlier time – you’re more likely to think of sultans and harems than brides of Christ, a Hispano-Moorish style known as Mudéjar. The history in this place is palpable. There’s a museum on site too.

Top Tip: If you fancy a little gift shopping (or you have a sweet tooth and fancy some elevensies), the nuns sell typical local confections they make themselves at the gift shop. And the nuns are just as sweet as what they sell.

One of the oldest on my list is this fourteenth-century Gothic example, with single bell tower and less adorned interior. But I think it’s just as beautiful as some of the gaudier examples, and if again if you like your history, this is a key part of Seville’s heritage.

Also, the walk towards our next attraction takes in – if you have the energy…

After the white-walled peace of the last Iglesia, this place is a riot of seventeenth-century Baroque intensity, colourful tiles and an octagonal dome, towering above one of the most staggering altars I’ve ever seen. One of my favourites anyway – or maybe it was just the rush after all that flamenco.

Top tip: You’re over halfway in terms of distance here, so duck in somewhere for lunch – La Molona across the street serves some of the best tapas anywhere in the city.

After that comes the high point of my little tour: the cathedral that dominates Seville’s skyline and from whose bell tower you can get the best view over the clay-tiled roofs of this medieval tangle. Inside, the largest altarpiece ever constructed dominates the church just like it does the city – it’s breath-taking, gold leaf and 44 different depictions of the story of Jesus and Mary. Even Christopher Columbus didn’t want to leave – his tomb is here.

For the price of entry to the cathedral, you also get access to a site which prior to the Reconquista held the city’s biggest mosque. Now, though, you get another stunningly ornate altar, and some of the finest stained glass you can see, inside a stylised Mannerist red brick building. 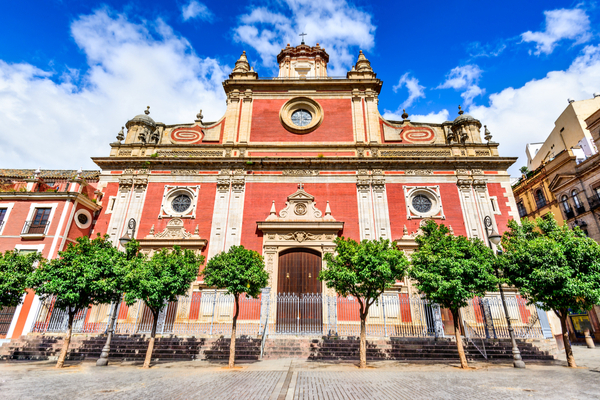 On the other side of the Plaza de San Pedro stands the Moorish tower of this church dating from the 1300s. Inside, some beautiful late-Renaissance statues.

Top tip: Fancy a tipple? Round the corner is La Rinconcillo, Seville’s oldest bar – which is a little stunner in itself.

Aaand relax! All done – and the last on the list is one of the finest. The baroque exterior features an eye-drawing stucco doorway, inside which is a richly painted ceiling, gauntly lifelike Christ statue, and crucially, a place to sit down.

Hotel Cervantes – Probably the best stay for couples in the city. The location is second to none, 10mins from the Cathedral, right in the middle of all the sights. Rooms of a high standard, with a charming interior courtyard and patio.

Seville is served by a large airport (SVQ) offering flights year-round in under three hours from London. Prices fluctuate, but deals can be had on- or off-peak if you time it right. September or October is ideal for clement weather and price.

To get the 14km into the city, Shuttle Direct offers the best mix of value and convenience, with shuttle buses or private transfers available to whisk you into a city that will entrance, inspire, and stay with you forever.

With almost 40 years’ experience in shuttles and transfers, Shuttle Direct are one of Europe and North Africa’s foremost experts in professional service. Our local drivers are knowledgeable, professional, and look forward to making your trip that little bit more special.