Growing from humble origins as a Viking fishing village in the 10th century, Copenhagen is now the largest city in Scandinavia with over two million people living in its metropolitan area. As well as being the capital of Denmark, the city is the country’s main economic and tourist centre which attracts millions of short-break visitors every year. It is also a popular destination for cruise ships embarking on Baltic cruises to the likes of Helsinki, Tallinn, Riga, Stockholm and St. Petersburg. This year alone more than 300 cruise ships will visit Copenhagen bringing with them almost 750,000 cruise passengers.

The city itself lies on the east coast of Denmark just 35 minutes by train from the Swedish city of Malmö by way of the 16.4km long Øresund Bridge. This impressive structure recently featured in an excellent Scandinavian crime drama simply called ‘The Bridge’ and is well worth looking out for as you approach or depart from Copenhagen. Only a few years ago the bridge was in the news when Royal Caribbean International’s $1.5 billion cruise ship Allure of the Seas went under the Øresund Bridge with just inches to spare.

Insider Tip: If you’re visiting during the summer months be prepared for more than 17 hours of daylight as occurs in these northerly latitudes with sunrise around 4.30am.

Copenhagen is blessed with a plethora of historic buildings scattered around its small city centre together with a series of lovely parks and charming streets adjacent to its canals. Coffes and restaurants abound in this fairy-tale destination which will undoubtedly prove to be one of the many highlights of your Baltic cruise. 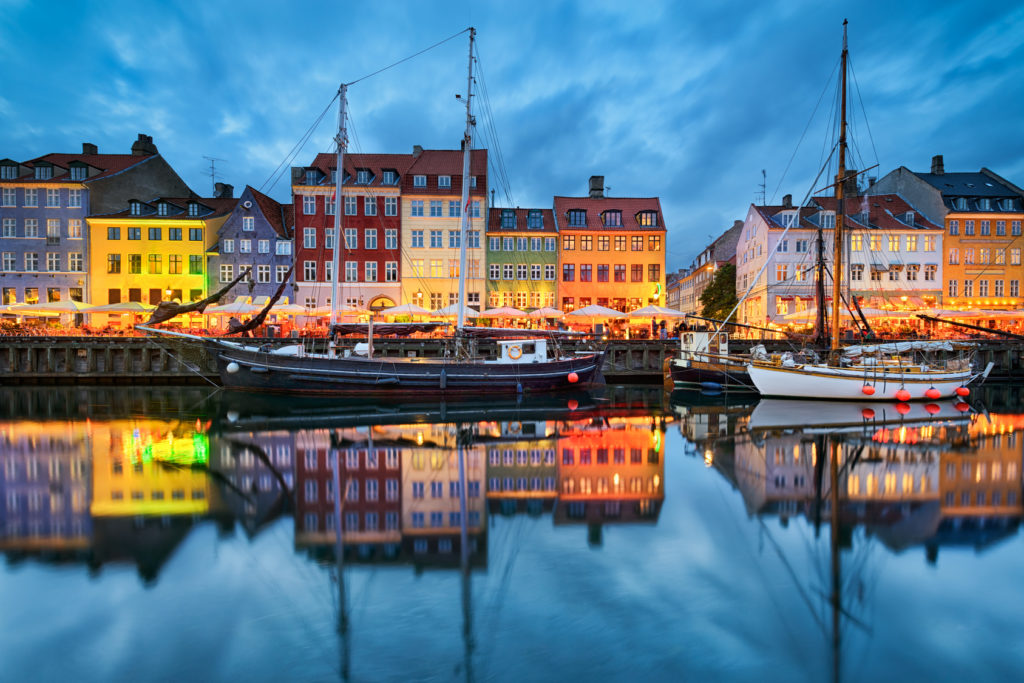 Whilst there are three possible arrival terminals the majority of cruise ships now dock at the Ocean Quay (Oceankaj) which is located in the city’s North Harbour (Nordhavn). Unfortunately, Copenhagen’s excellent public transport system doesn’t reach as far as this industrial zone and walking into the city isn’t an option so you’ll need to check out what services have been provided by your cruise line for getting into the city centre. There are rarely enough taxis outside the terminal to cater for the number of people arriving on a ship so you might pre-arrange a private transfer with Shuttledirect. The only other option is to take a city bus which runs from the port area into the city centre on weekdays.

A more convenient place to arrive is at the Langelinie Pier (Langeliniekajen) which is home to the statue of The Little Mermaid and a nice selection of shops and coffee. It’s about a 3.5km walk to the city’s Town Hall Square which you could do on foot. Alternatively, you could walk to Østerport Station in about 15-minutes which is one of the city’s main transport hubs. You should easily find a street taxi if you prefer not to walk.

The final, and least likely, possibility is that you arrive at the Freeport Terminal (Frihavn) which is just over 3km from the city centre. You can walk to the Nordhavn train station in about 15-minutes to get into the city or take the city bus (on weekdays).

Thanks to its location and first class infrastructure Copenhagen is a popular embarkation port for Baltic cruises. The city’s airport is only 12km by road from the city centre and a little further from the main cruise harbour at Ocean Quay which lies to the north-east of the city. The efficient public transport network provides excellent links between the city and the airport as follows:

By Train: The airport train station is beneath Terminal 3. It runs services to Malmö in Sweden on the Øresund Railway Line with a stop at Copenhagen Central Station. Free airport buses connect all terminals 24-hours a day.

By Metro: Probably the best form of public transport for getting to and from the city, the Metro station is at the end of Terminal 3. There are services every 4-6 minutes during the day to Nørreport Station in the city centre with a journey time of just 13 minutes.

By Bus: The Airport Bus number 5A runs to Copenhagen Central Station, City Hall Square and Nørreport every 10 minutes during the day. Journey time of around 30 minutes can be expected though this will depend on prevailing traffic conditions.

By Taxi: Taxis are available outside airport terminals with an expected journey time of around 20 minutes to the city centre or 30 minutes to Ocean Quay.

By Private Transfer: If you’re arriving with a significant amount of luggage and are looking to get directly to or from your ship then you’d be as well pre-booking a private transfer rather than struggling to negotiate the public transport system. 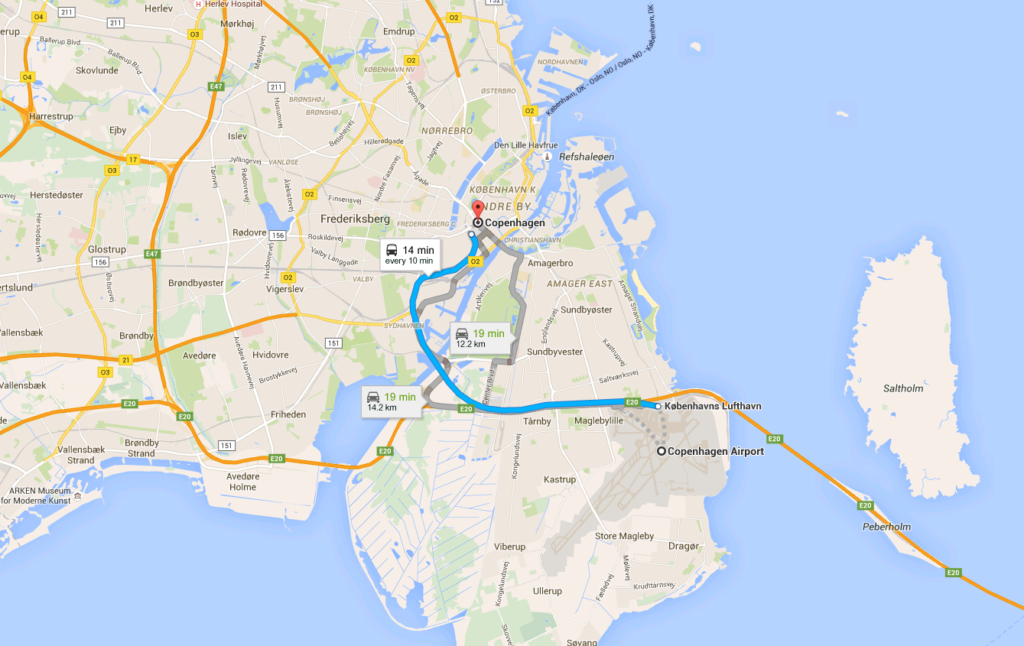 Getting Around in Copenhagen

Copenhagen is a very compact city so the vast majority of visitors will be happy to discover its many highlights on foot. If you haven’t already got one, pick up a map at the very helpful Visitor Information Centre at Vesterbrogade 4 near Central Station then begin your sightseeing from the nearby Town Hall Square. A number of ‘free’ walking tours are offered by guides who work for tips. Usually they depart twice a day (11am and 3pm) from the Town Hall Square, just check details in the information centre.

Insider Tip: The currency in Denmark is the Danish Krone. You’ll have no problem finding ATMs all over the city. A number of tourist shops will accept Euros (at a poor exchange rate) but are not obliged to do so.

Other options include the ‘hop-on, hop-off’ bus service which covers a circuit of many of the city’s top attractions. They pick up directly outside Ocean Quay Cruise Terminal and stop at Langelinie Pier so prove most convenient for cruise ship passengers. Alternatively, you can join the tours at one of the many other stops located near major attractions. There are also short canal tours which can be taken separately or as part of one of the bus tours.

Copenhagen is a one of the world’s most bike-friendly cities so if you’re fit and able and fancy a spin you can hire one of the ‘City-Bikes’ by the hour simply by inserting a coin in the bike’s locking system at bike stations all over the city. 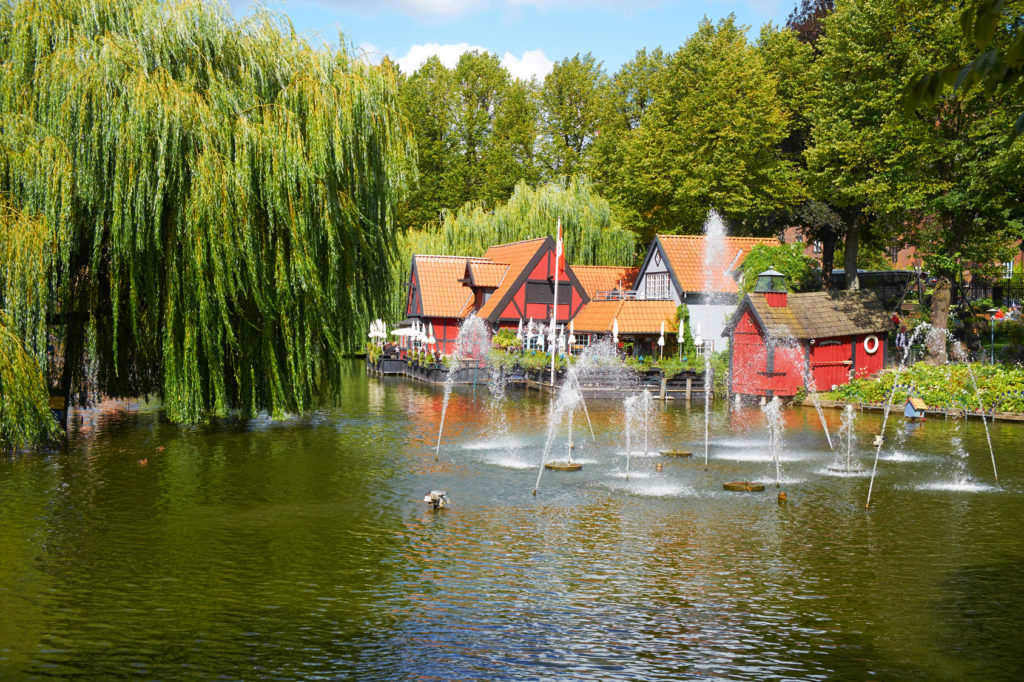 A beautiful pond with fountain and smal confortable restaurant in Tivoli gardens in Copenhagen, Denmark.

In spite of its role as a capital city Copenhagen is remarkably easy to get around on foot with most of its main attractions located very close to one another. Here are some of the main sights to look out for:

The Little Mermaid: Some cities are synonymous with a single attraction. In Copenhagen’s case that is the little bronze statue of The Little Mermaid which has been sitting on a rock in the Langelinie Harbour since 1913. Inspiration for the statue was Hans Christian Andersen’s fairy tale of the same name which told the story of a mermaid who wanted to become human. Cruise ships which dock at the Langelinie Pier are very close to The Little Mermaid which, in spite of its size, remains the city’s number one attraction.

Tivoli Gardens: This is one of the world’s oldest amusement parks which opened its doors in 1843. In 1951 Walt Disney visited Tivoli to look for ideas related to his own plans for Disneyland which opened just four years later in California. Whilst the scary rides might not be your scene you can still enjoy a walk around the lovely gardens of this old world fun park and pass the time of day in its coffes and restaurants.

Amalienborg Palace: Denmark is home to the world’s oldest monarchy which dates back to the year 1417. The current monarch is Queen Margrethe II whose winter residence in Copenhagen is the Amalienborg Palace. Some areas of the Palace are open to the public, entrance is free with the Copenhagen Card. The best time to visit is at midday when you can watch the changing of the guards who arrive at the Palace after marching from their barracks.

Insider Tip: The Copenhagen Card provides unlimited access to bus and train services for a 24-hour period. It also includes entry into many of the city’s top attractions and museums providing convenience and value if you’re planning on seeing as much as possible of the city during your time in port. It can be purchased online before travelling.

The Marble Church: It’s well worth paying a visit to Frederik’s Church which lies just west of Amalienborg Palace simply to admire its magnificent dome which was inspired by St. Peter’s Basilica in Rome.

Rosenborg Castle Gardens: Dating back to the 17th century these were originally the private gardens of Rosenborg Castle. Today they are home Rosenborg Barracks where the Royal Guards are based and are a lovely city centre location for visitors looking to take a break from a hectic day of sightseeing.

Insider Tip: For a great lunch head down to Copenhagen Street Food Market (Trangravsvej 14) and try a typical open-faced rye bread sandwich filled with your choice of delicious cold meats and cheese.

Christiansborg Palace: The original structure of this historic building can be traced as far back as 1167. Over the centuries it has served as a royal residence and seat of government. Today it is home to the Danish Parliament and the office of the country’s Prime Minister. Some parts of the Palace continue to be used by the Royal Family. Limited areas are open for public visits.

One Night in Copenhagen

For a cultural evening to remember check out the program of the Royal Danish Theatre which is the nation’s performing arts institute. They offer
a full program of opera, classical music and ballet events at their historic theatre located in Kongens Nytorv, the city’s largest square. They also stage events at the impressive Copenhagen Opera House which lies in the city centre, on the island of Holmen.

For something a little less refined take a stroll down to Tivoli Gardens which stays open until midnight and is a lovely place to wander around in the company of friendly Danish families. There is specific evening entertainment including music and light shows or you can simply enjoy a meal at one of the park’s restaurants washed down with a locally brewed glass of Carlsberg.

For an authentic local dining experience in the city pay a visit to one of the many smørrebrød restaurants where you order from an enormous selection of open-faced sandwiches. Top recommended venues for such cuisine include Aamanns Etablissement (Øster Farimagsgade 10) and Restaurant Ida Davidsen (Store Kongensgade 70). 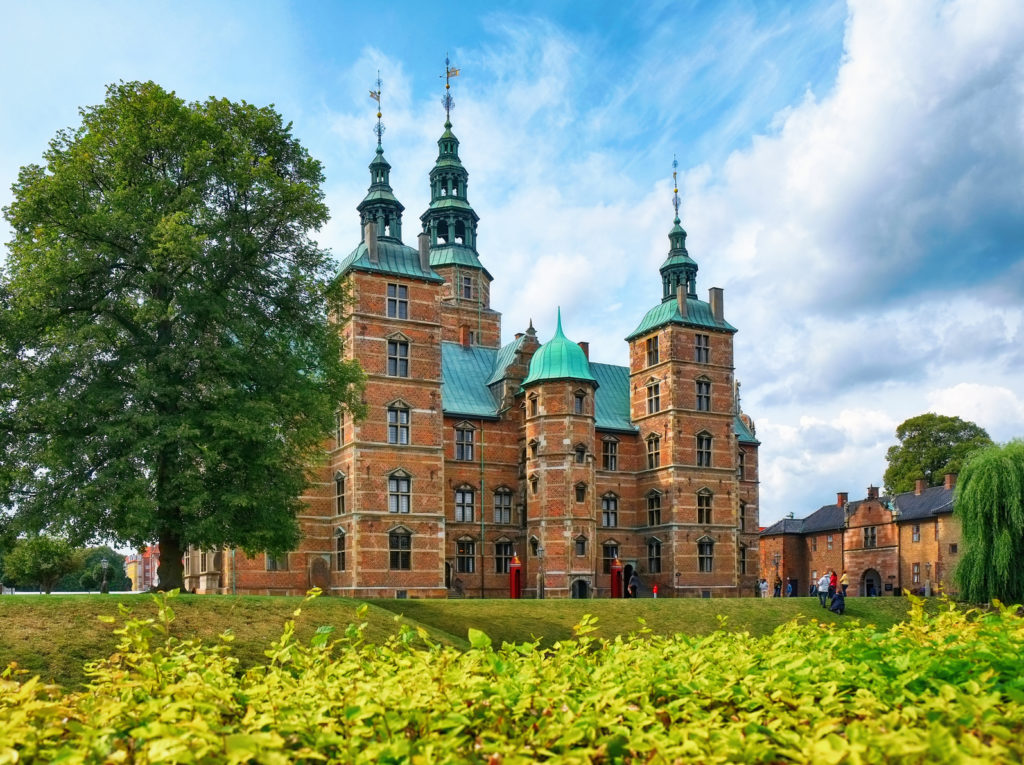