Set amidst the raw, epic landscape of the Balkans, Bosnia and Herzegovina is a country of expansive culture and deep historical significance. Previously more renowned for its troubles than its triumphs, it has reimagined itself with stellar success into a popular tourist destination.

From the exotic, contemporary-infused glamour of Sarajevo and Mostar, to the quiet, medieval elegance of its tiny rural villages and the haunting beauty of the ragged mountain ranges, the country has forged a unique, unified culture along the scars and seams of its recent history.

There’s a surprising diversity of attractions for the openhearted traveller. Those looking to explore the rich history will find it on glorious display in the capital, Sarajevo, in the wonderfully preserved Old Town, Baščaršija. The fusion of East meets West is perfectly described in the delicate 16th century architecture of the Gazi Husrev-bey Mosque and the elegant Ottoman-style silhouette of the Latin Bridge, where the course of world history was set with the assassination of Archduke Franz Ferdinand.

For outdoor enthusiasts, the mountainous beauty of Bosnia can be explored around medieval towns near Sarajevo and Zagreb, like Travnik, Jajce and Bihać. The region offers superb skiing and hiking and is fast becoming renowned as one of Europe’s best rafting destinations.

Small in area, Herzegovina packs a mighty punch, with a bold, brutal landscape of wild rivers and rugged mountains. In Mostar, the iconic image of the Stari Most (‘old bridge’) defines the city, while the ethereal beauty of Blagaj and the religious significance of Međugorije (the site of an alleged appearance of the Virgin Mary) set them high on the list of must-sees. 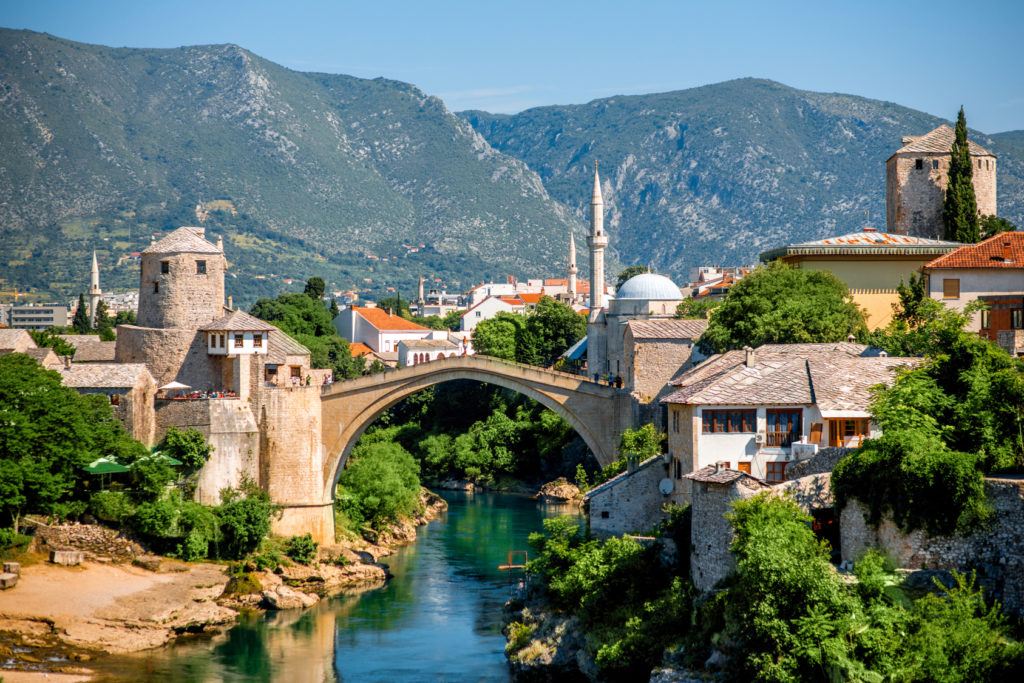 A delicious fusion of eastern exoticism and western flavour, the cuisine is typical of the Balkans. Heavily meat and vegetable based, traditional dishes include a wide range of spices. Evolving under an eclectic range of influences, including Mediterranean and Middle Eastern, the resultant flavours are surprisingly delicate. Fresh produce is usually of exceptional quality, with plenty of organic meat and vegetables.

Some of the most iconic dishes are burek, a soft pita pastry with sweet or savoury filling; ćevapi, a spiced, skinless minced meat sausage; begova čorba, a traditional chicken and vegetable soup; and bosanski lonac, a slow cooked stew with white wine. 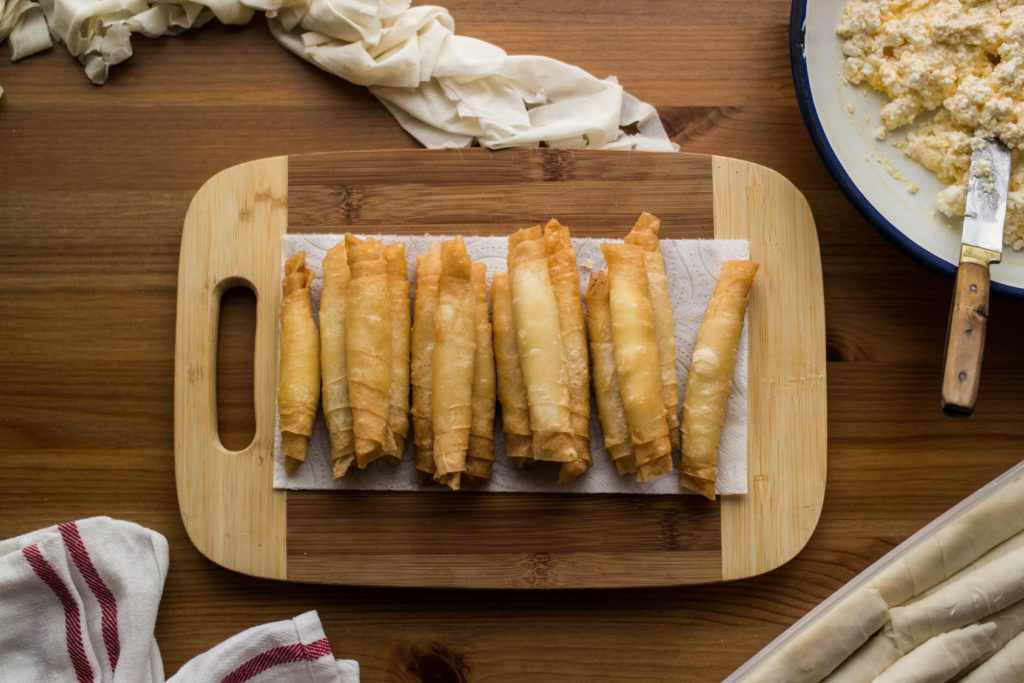 With a very noticeable delineation, the south basks in a Mediterranean climate and enjoys quite mild winters, while the north of the country has a semi-continental climate and shivers through harsh, cold winters. With a regular blanketing of snow, in winter it’s an excellent ski destination, while in summer, warm temperatures are fairly regular between the north and south. The best time to visit is during the spring and autumn, when it’s comfortably cool and there’s little rainfall. 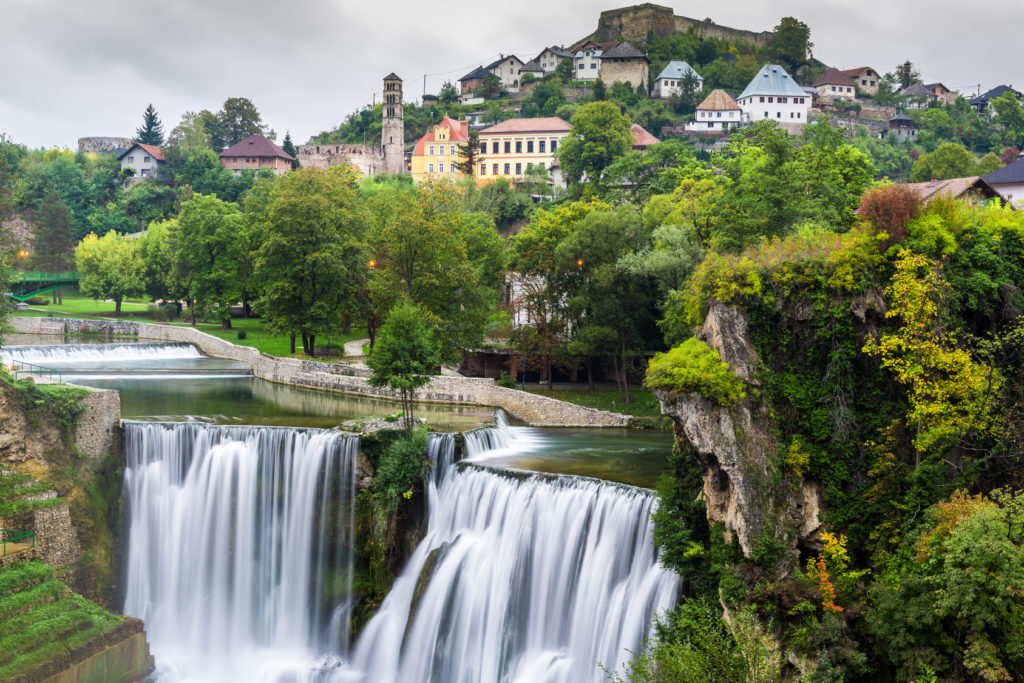 How to Get to Bosnia and Herzegovina 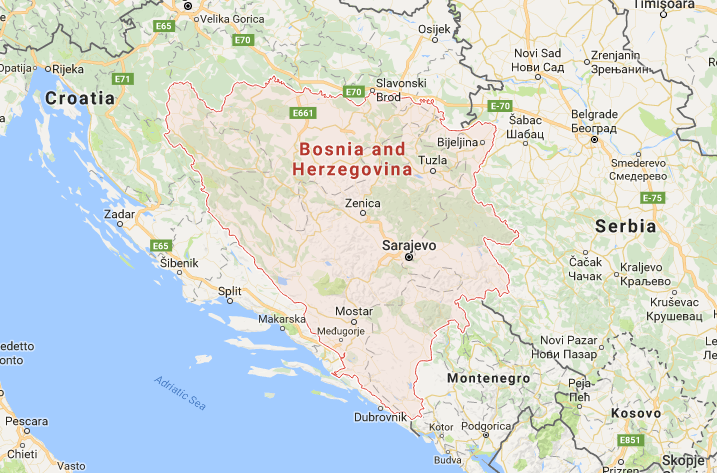 The country’s main international airport is in the capital, Sarajevo. While there are no direct flights from the UK, several airlines operate routes with one stopover. Pegasus, Lufthansa, Austrian Airlines and Brussels Airlines offer flights out of London Gatwick, Edinburgh and Manchester. With a stopover the journey time to Sarajevo is around 4.5 hours.

After landing, the most convenient way of getting to your final destination without the hassle of public transport is on a pre-booked shared or private transfer with Shuttle Direct.

If you’re looking for the adventure of train travel, you can get from the UK to Bosnia and Herzegovina with a two days journey, via Paris, Munich and Zagreb. A Shuttle Direct service can meet you at the train station to take you to your final destination.

For energetic travellers, white water rafting on the magnificent, raging River Una, near Bihac, offers an exhilarating way to enjoy the spectacular landscape, while getting very, very wet.

Immerse in the magnificence of nature and history in the “open air museum” of Jajce – a picturesque town with a 14th century fortress and a breathtaking waterfall as its centrepiece.

Set on the banks of the Trebišnjica River, Trebinje is one of the prettiest towns in the country. Its authentic ambience and well-preserved Old Town can’t help but enchant and inspire. 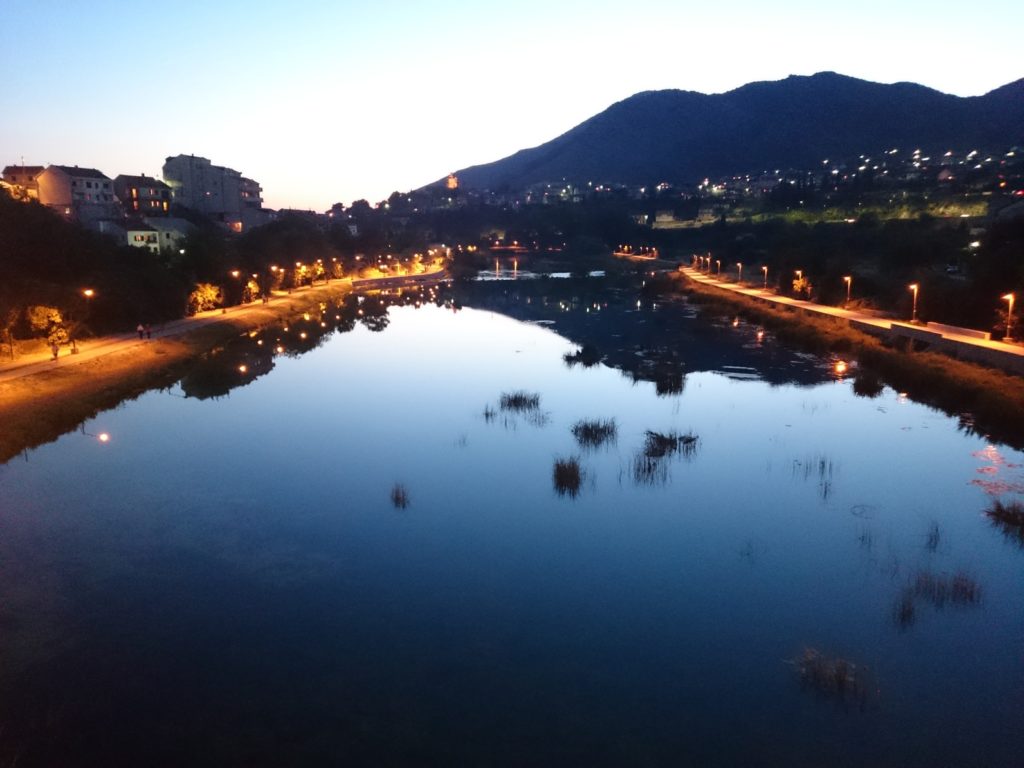 As the most trusted operator of convenient and cost effective transfers from airports and train stations throughout Europe and North Africa, Shuttle Direct has a service to suit every budget and travel requirement. Wherever you’re travelling to in Bosnia and Herzegovina, you can book online via our easy to navigate, secure system and have all your onward travel arrangements in place before you leave home.