The picturesque town of Kitzbühel – with its brightly-coloured medieval buildings, cobbled streets and Alpine backdrop – may be famous for hosting the skiing World Cup’s most challenging race, but did you know it’s also a great place for a summer break too?

Once the snow has melted and the glitzy, jet-set crowd have packed up their skis and gone home, Kitzbühel is revealed as a quiet, historic Tyrolean town, ripe for exploration. And there is certainly a lot here to explore. 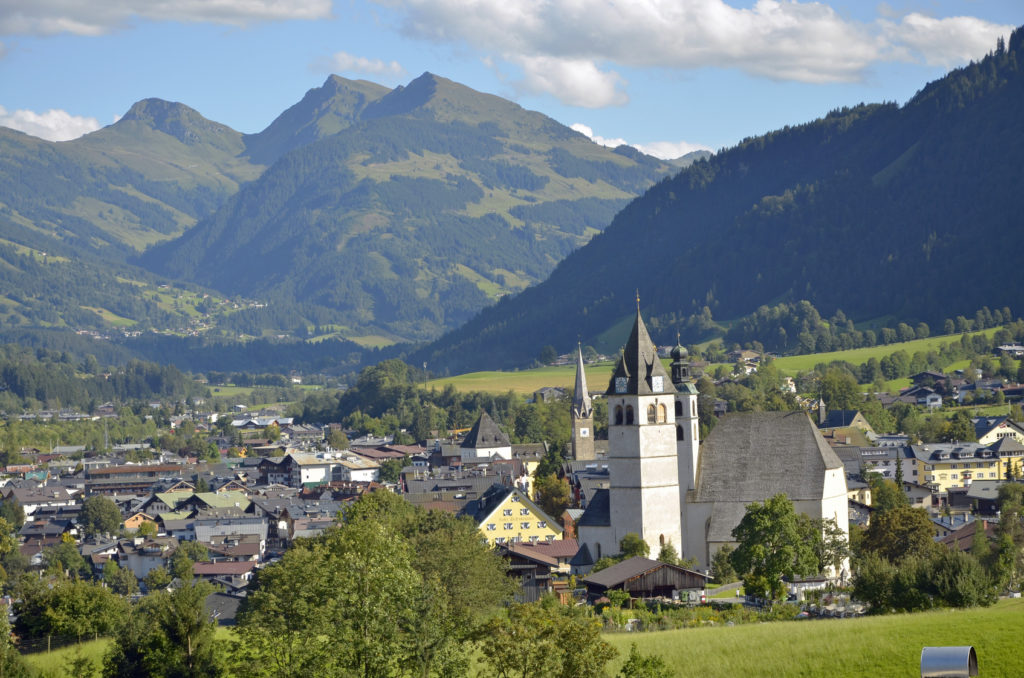 The town of Kitzbühel actually dates back to around 1000 BC when it was a small settlement in which the native Illyrians traded in copper, mined from the surrounding mountains. The village fell under first Roman, then Bavarian and finally Tryolean control. By the twelfth century there are records describing ‘Chizbuhel’ as a town, and by the thirteenth century it had become an important settlement in Upper Bavaria.

Thanks to its location, and the importance of its trade in locally mined copper and silver, Kitzbühel has spent much of history being passed from Bavarian governance to that of the Austrian Tyrol. In fact, it was not until towards the end of the nineteenth century that its position was finally settled as part of Tyrol, and therefore under Austrian, rather than German, control.

This rich, complicated history, and the important strategic position of the town, has left Kitzbühel with a fascinating cultural identity as well as beautiful historic architecture quite unlike anywhere else in the region. 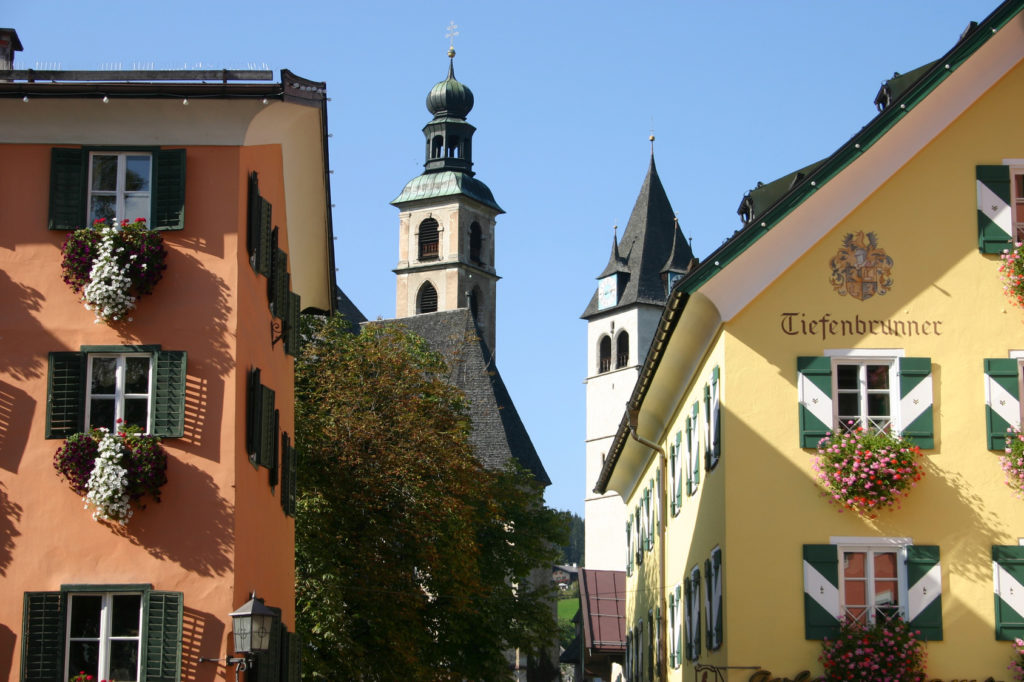 From the original stone wall built around Kitzbühel in the twelfth century and its surviving town gate, to its scattering of beautiful historic churches and castles, there are a range of captivating historic buildings to explore in the town.

There are several excellently preserved castles or Schlösser, as they are known locally, in Kitbühel. Schloss Kaps was built at some time during the fifteenth or sixteenth century and still remains in excellent condition today, with interiors which have not changed for hundreds of years. The later Schloss Lebenberg is now a five-star hotel, but the heritage of its listed tower is protected and welcomes visitors to explore the beautiful building.

“Katharinenkirche in Kitzbühel” by Böhringer Friedrich licensed under CC BY-SA 3.0 AT

Kitzbühel has a number of interesting religious spaces to explore. These include the High Gothic fourteenth-century St Catherine’s Church with its coppersmith altar, and the beautiful Church of Our Lady of Kitzbühel, a Gothic church with a stunning baroque interior. If you prefer modern architecture then be sure to check out the town’s Protestant Christ’s Church, built in 1962 by leading Austrian architect Clemens Holzmeister.

With such a rich and complicated history you may well want to find out more about this beautiful town. Thankfully this is easily done by visiting the historic Kitzbühel Town Museum, set in a large thirteenth-century house in the centre of Kitzbühel. Illuminating the region’s mining past and life in the town through the ages, the exhibition also features artefacts from its ancient past, baroque art and more recent handicrafts. A permanent collection of local artist Alfons Walde is also on view and well worth a look.

Another interesting place to visit is the Hinterobernau Farmhouse Museum. In this beautifully preserved sixteenth-century Tyrolean farmhouse, you will find yourself transported back to a time when the farms in this area were small and self-sufficient. This one still has its traditional shrine, baking rooms, beehives and hayloft and exhibits include a range of farm machines and tools.

Of course one of the great joys of visiting the Tyrol region during the spring and summer months is to see this beautiful Alpine landscape in bloom; Kitzbühel makes the perfect destination for experiencing this. 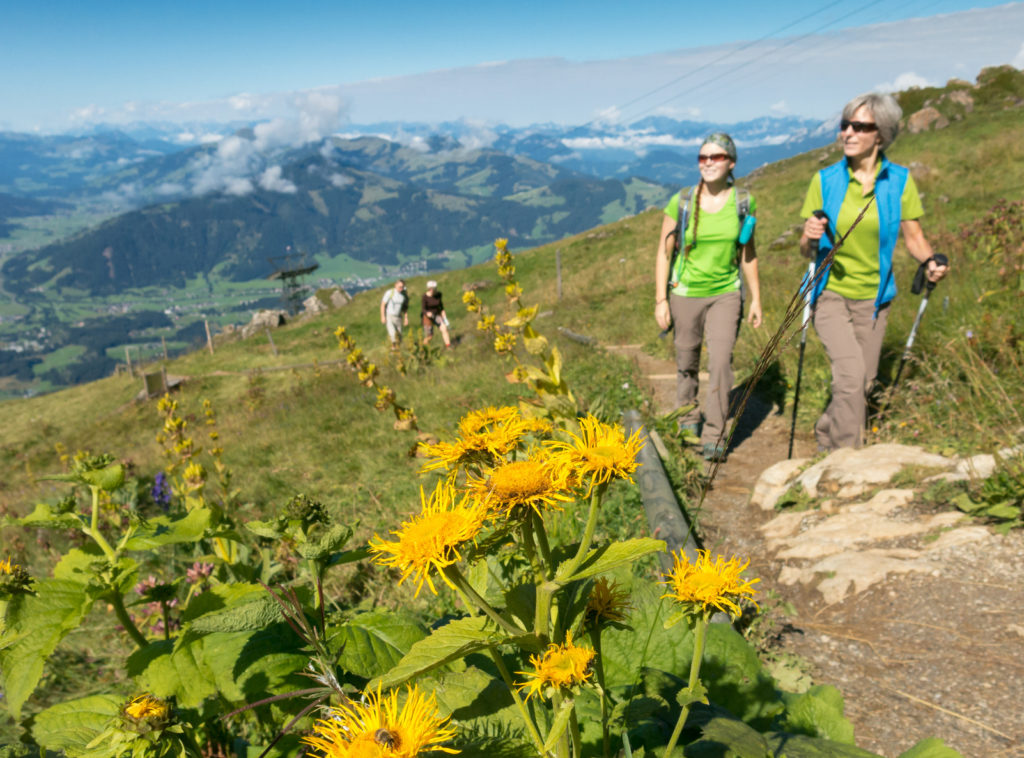 This botanical garden, set at 1800m, contains a range of stunning Alpine plants and flowers set against a backdrop of a breathtaking mountain landscape. Walk along the carefully-constructed paths and through the Alpine meadows to really experience the best this garden has to offer. And don’t worry about climbing up to this beautiful garden –there’s a cable car to take you up (and back if you don’t fancy the stunning mountain trail walk down to town). 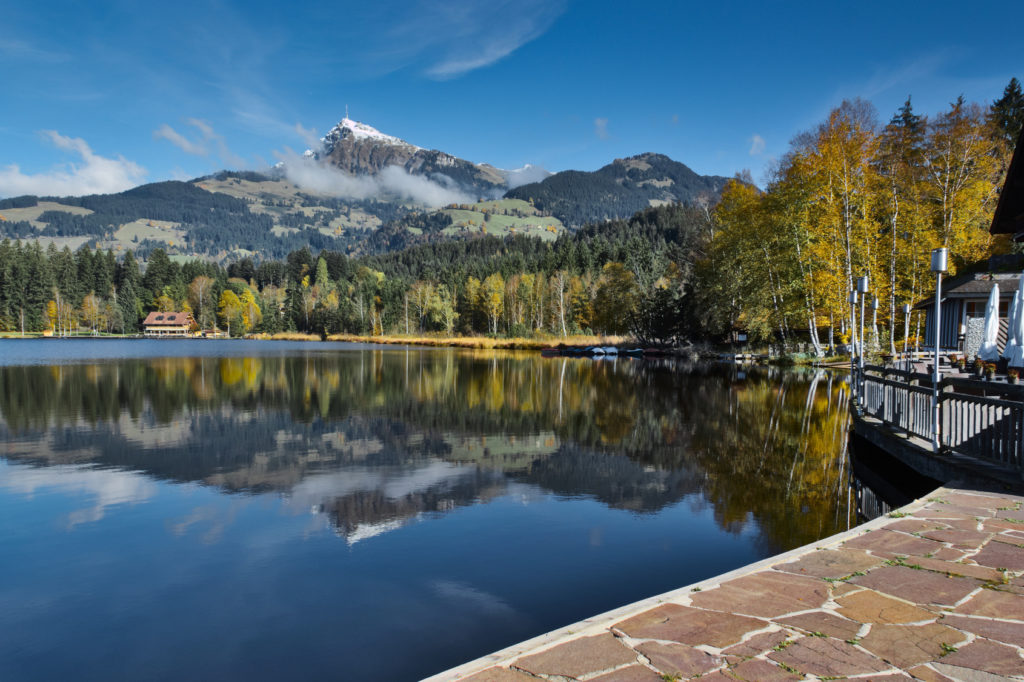 In the warmth of summer, if you feel like a break from all the cultural sights that Kitzbühel has to offer, why not plan a trip to Lake Schwarzsee for a spot of swimming and sunbathing. Temperatures in the lake reach an inviting 25ºC during the summer. You can swim in the natural waters of this lake with a backdrop of the Wilder Kaiser mountain range, or just lie back and relax on its surrounding lawns.

How to Get to Kitzbühel 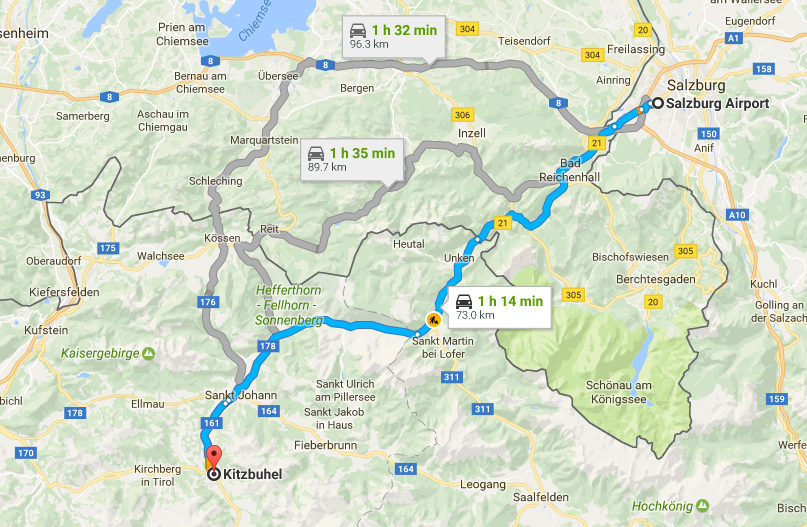 The nearest airports to Kitzbühel are Salzburg, Innsbruck and Munich. Innsbruck and Salzburg airports are around one hour’s drive and are served by a number of international airlines flying from the UK, including easyJet, British Airways, Ryanair and FlyBe. Munich Airport is around two hour’s drive and is served by a wide range of airlines. Airport transfers from any of these airports can be arranged with Shuttle Direct, whose drivers will meet you at arrivals and take you directly to your accommodation in Kitzbühel.

One of the leading companies providing airport transfers across Europe and North Africa, Shuttle Direct offers a hassle-free way of getting from the airport to your holiday destination. Use the easy online booking service and your driver will be waiting for you at the arrivals gate when you touchdown.