The historic city of Verona is famously said to have more Roman ruins than any other Italian city, beside Rome, but don’t let this fact blind you to everything else the city has to offer. Verona was made a UNESCO World Heritage Site not just because of the excellent condition of its Roman architecture but because it is also crammed with medieval buildings, Renaissance art and a raft of other cultural treasures too. 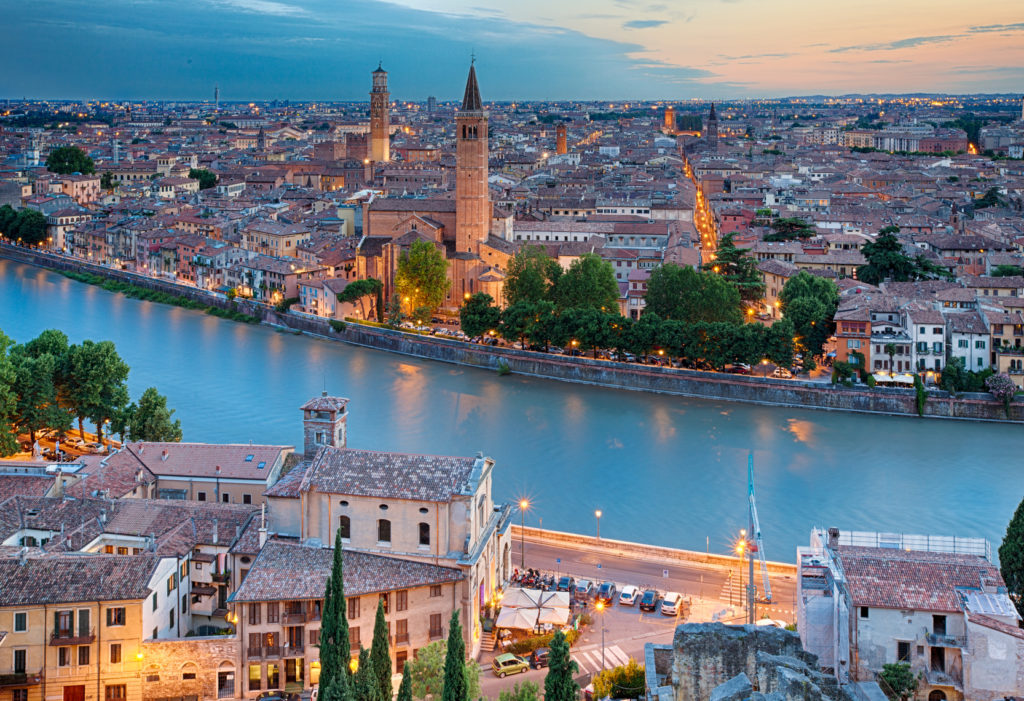 Since as far back as the 3rd Century, Verona has held a vital strategic position as a military base and centre for trade, first for the Romans, then for the great families of the Italian Middle Ages and the immensely powerful Republic of Venice. It is thanks to its prominent position throughout the history of Italy that this northern city now boasts such splendid architecture from across these fascinating eras.

Due to the constricting Lessini Mountains on one side and the River Adige on the other, Verona is an attractively compact city, perfect for exploring on foot. A stroll through its historic streets can easily take you from Roman gates to the 12th Century cathedral, on to the 13th Century Gothic tombs of the Scaligere family and various Renaissance palaces. In fact, there is so much history to take in here, it becomes easy to understand the fascination Shakespeare had for the city, basing no less than three of his plays here. 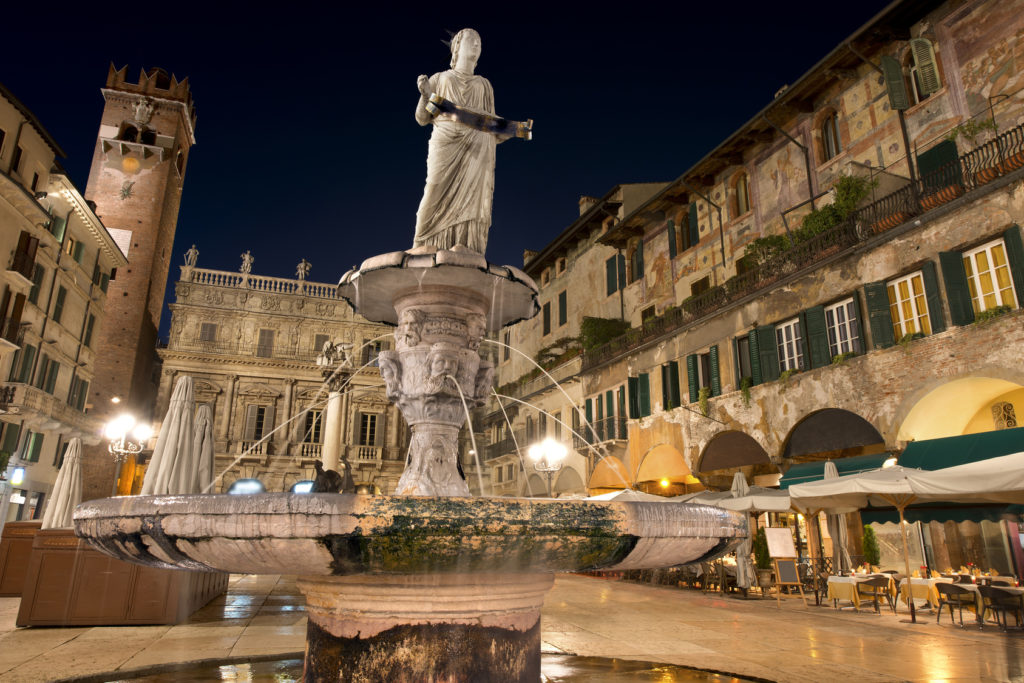 With so much to see in Verona, probably the easiest way to divide the city is by its major historical periods, and the sights which belong to it. Verona was an important trading post for the Romans, and one which brought a lot of wealth and prosperity to the city. To show off its affluence the Romans constructed a vast forum, theatre and arena for the people of Verona, which still remain today.

Probably the best place to start on your exploration of Verona’s Roman past, is the point at which the Roman’s themselves would have entered the city, at the Roman Gates or Porta Borsari. 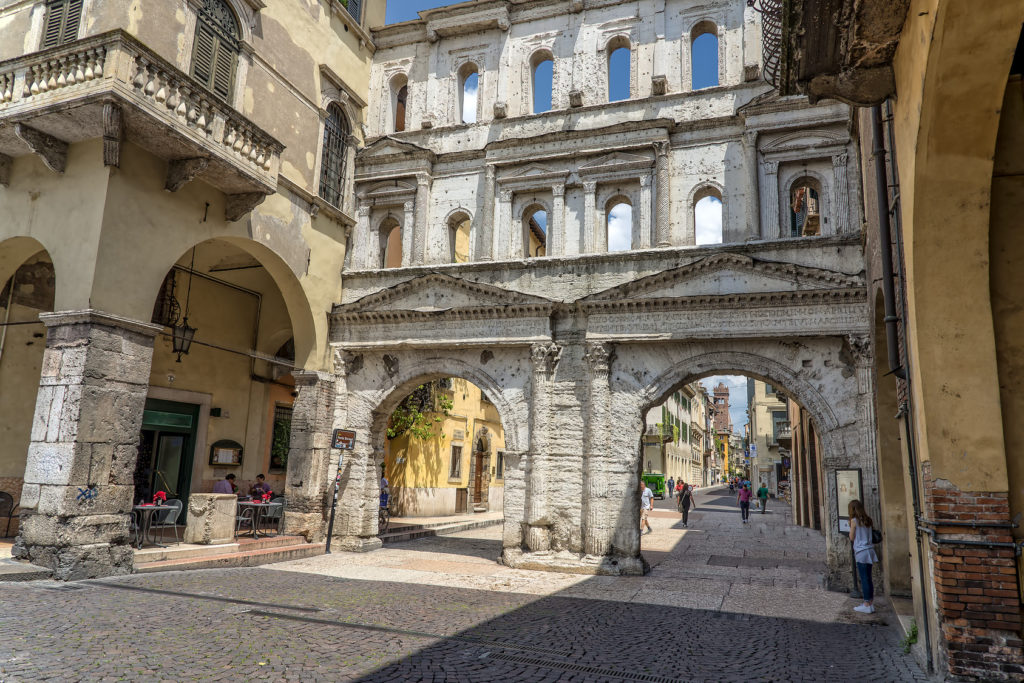 The two great Roman arches, with two rows of smaller arches on top, are today found in a busy pedestrianised area with crowds of locals and visitors walking under them every day. In fact, they look so well assimilated into the surrounding Renaissance architecture that you might be forgiven for not immediately noticing them.

One of Verona’s most well known landmarks is the vast Roman Arena, now used as an open-air theatre for hosting the city’s lavish Opera productions. Built around the time of AD 30 as a venue for the city’s gladiators, it remains in astonishingly good condition today. In 1913 it was reopened as a theatre, becoming the world’s largest open-air opera venue. The operas held here are vast, spectacular productions and are well worth experiencing, even if you have only a passing interest in opera. 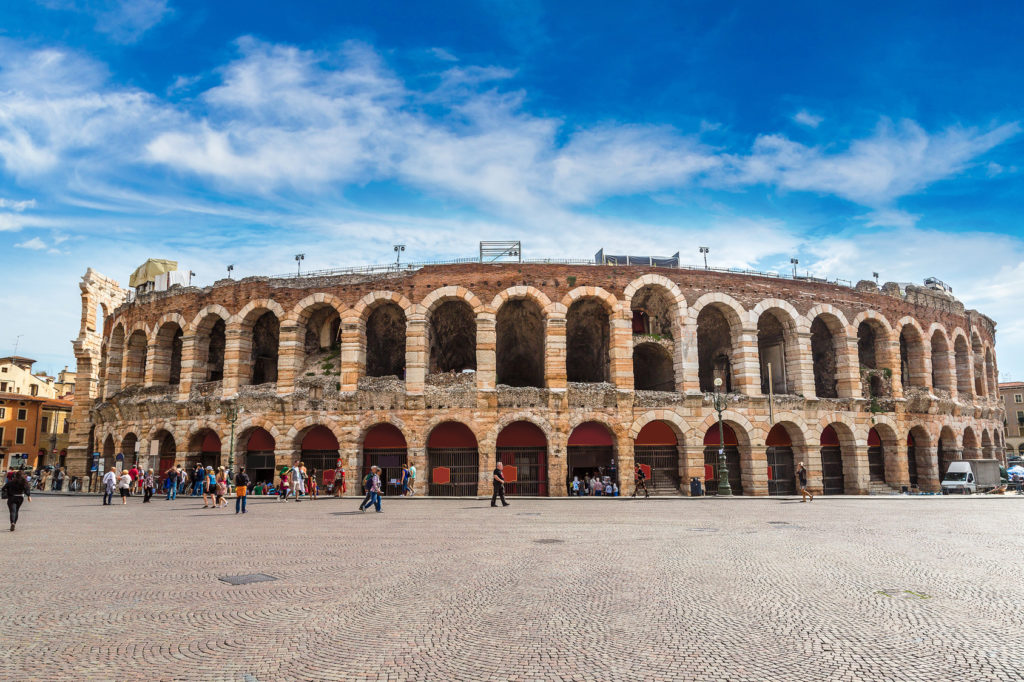 Serious opera fans, however, should visit the Arena’s Opera Museum with exhibits that tell the story of what lies behind putting on opera productions on such a massive scale.

The Roman amphitheatre, built into the Verona hillside with views out across the city, actually predates the more famous Arena, having been built towards the end of the 1st Century BC. A fascinating place to visit, the Teatro Romano has its own museum of Roman artefacts including altars, mosaics and inscriptions bearing dedications to the gods. During the summer there is a programme of musical entertainment which, while not on the scale of the Arena operas, is a lovely way to spend an evening.

While the Roman structures and ruins of Verona are breathtaking in their scale and their antiquity, equally fascinating are the elaborate buildings dotted around the city from the medieval and Renaissance eras. 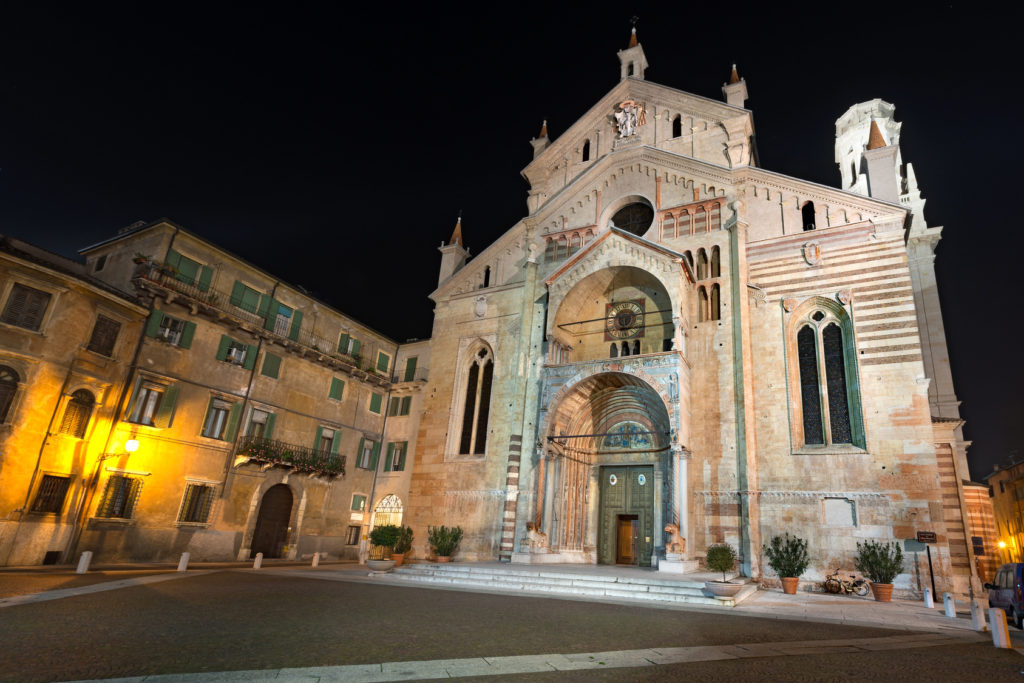 One of the oldest buildings from this period is Verona Cathedral. A fascinating structure which was added to and remodelled throughout the Renaissance period, the cathedral now stands as a testament to the development of architecture throughout the era. Originally built in a Romanesque style at the end of the 12th Century, later additions include the Gothic windows, which were added in the 14th Century, a 15th Century interior and a Baroque addition to its façade. 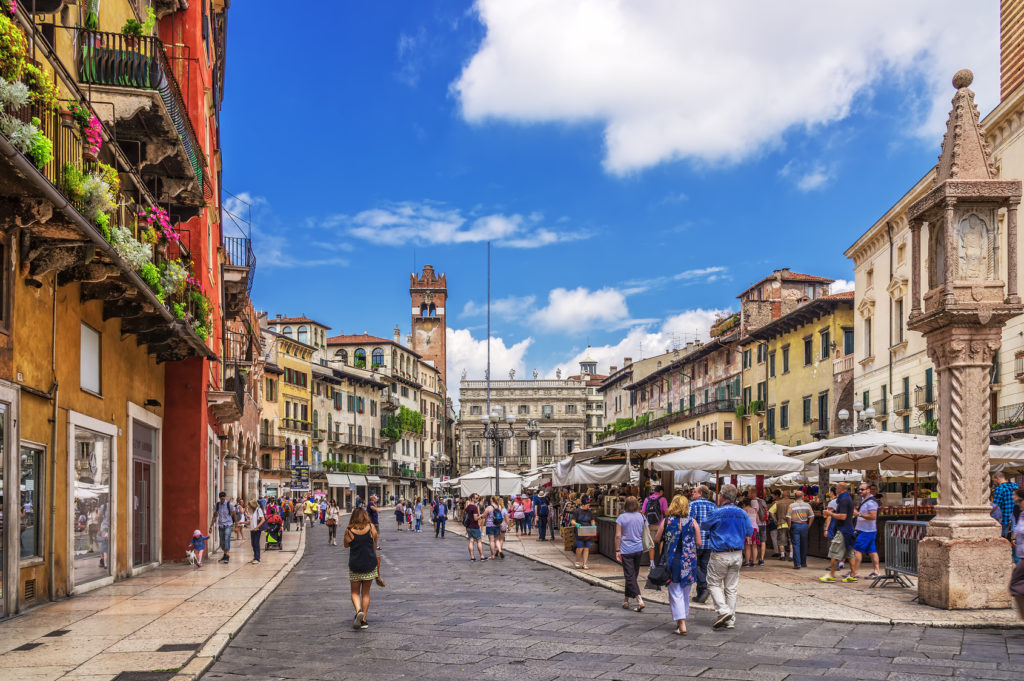 Definitely a tourist hot spot, the Piazza delle Erbe (named after the fresh herbs sold at the market here) has to be seen. Originally the site of the Roman forum, the square is now surrounded by medieval and Renaissance buildings which make an impressively grand impact. Buildings to look out for include: the 14th Century Houses of Mazzanti, the Baroque Maffei Palace and the Gardello Tower. Also keep an eye out for the Madonna Verona fountain with its statue dating back to the 1st Century.

While it’s great to come here for a look at the architecture and a wander around the market, don’t be tempted to stay for lunch, the restaurants are expensive and there are much better to be found off the tourist trail. 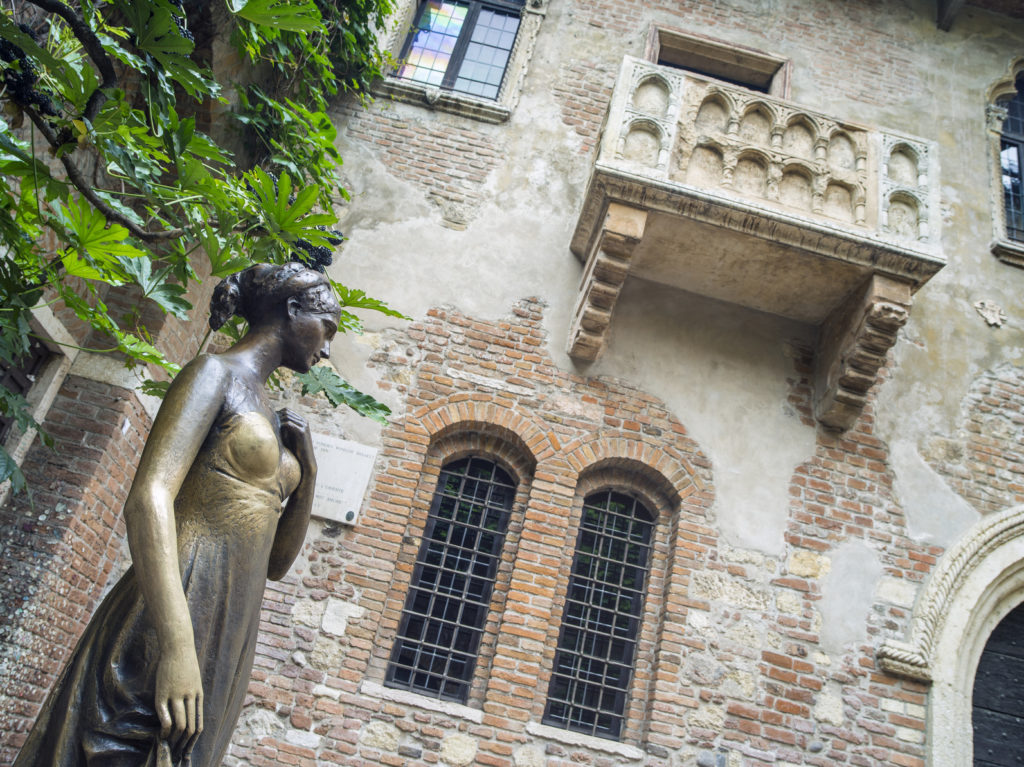 Much is made in Verona about the home of one of its most famous, and apocryphal, citizens, Juliet Capulet. Immortalised by Shakespeare in the play Romeo and Juliet, there is no actual proof that she existed but ‘Juliet’s House’ is still a sight most visitors want to see. The 12th Century house was owned by a Dal Cappello family (sounds sort of similar, doesn’t it?) and there is indeed a balcony from which she is said to have uttered her famous lines.

Once you’ve seen her house you might as well buy into the whole romantic myth and visit, what locals believe, is her tomb. The dark crypt below the convent San Francesco al Corso is certainly atmospheric and conjures up images of the tragic star-crossed lovers.

How to Get to Verona 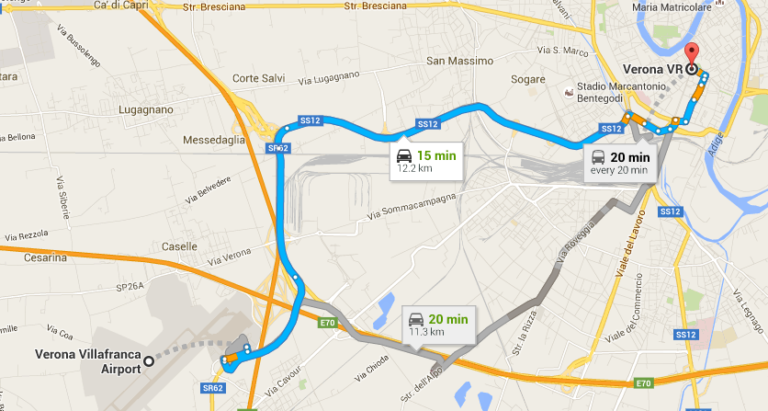 There are regular flights to Verona Airport from London by airlines including easyJet, British Airways and Monarch. You can also use the nearby Venice, Bologna or Milan airports and arrange a Shuttle Direct transfer to take you to the city.

There is a direct train connection to Verona from Paris, through the picturesque countryside of France and Switzerland. Shuttle Direct can also pick you up from the train station in Verona and take you directly to your hotel.

Corte Realdi Verona – Set right beside the Roman gate Porta Borsari, this stunning 17th Century guest house is right at the heart of the city’s historic centre. The palatial rooms at the Corte Realdi Verona are done up in lavish, Renaissance style and the atmosphere is warm and friendly.

Le Suite Di Giulietta – With a view across a courtyard of Juliet’s famous balcony the 15th Century Le Suite Di Giulietta makes the most of its Shakespearean pedigree with quotes from the play built into the design of the rooms. An elegant mix of historic charm and contemporary style, this eco-friendly hotel is a great choice for exploring the city’s historic centre.

Hotel Bologna – Set beside the Verona Arena, the Hotel Bologna is an elegant, contemporary hotel in the heart of the historic district. Enjoy a gourmet Italian dinner on the rooftop terrace, with views out across the city, in this friendly, boutique hotel.

One of the leading providers of airport transfers across Europe and North Africa, Shuttle Direct offers a hassle-free onward journey from the moment you touch down in your destination. Use the simple online booking service and a driver will be there to meet you at the airport to take you anywhere in the city you want to go.