The development of regional airports is a tried and tested way of providing a significant economic boost to local economies. A case in point is that of Bergamo in the foothills of the Alps which has never looked back since 2003 when it became a base for the budget airline Ryanair and was marketed as Milan (Bergamo). Today it is Italy’s 4th busiest airport dealing with around 9 million passengers per year. On the other hand there are the small regional airports such as Bolzano—Dolomiti in the Dolomite mountains which lies within a very short distance of some of Italy’s best ski resorts and is only 75km from the famous Brenner Pass into Austria. Bolzano could be a mecca for skiers heading for the slopes of central Europe but with only domestic flights from Rome arriving here it isn’t. Annual passenger numbers using the airport were around thirteen thousand last year … unlucky for some!

The Dolomites are a range of mountains in the north-east of Italy which are well known as a ski destination in winter and as a popular area for general outdoor pursuits during the summer months. Below are a selection of some of the region’s most popular ski resorts together with suggestions as how you can best access them. There are usually a few airports to choose from in both Italy and Austria from which you can arrange ski transfers to your destination. However, thanks to the availability of cheap flights with the likes of Ryanair and easyJet the two airports in Venice tend to serve as the principal gateway to the ski slopes of this region.

Have you ever noticed that every time you find a great new place it seems that Ernest Hemingway has been there before you? Well he’s done it again. I thought I’d be safe from following in Ernest’s footsteps as I arrived in the Dolomites but soon learned that that wasn’t the case. Back in the early 1920s on arriving in Paris his new bride lost a case full of his manuscripts at the Gare de Lyon train station. As a result Hemingway chose to take a self-enforced break from writing before heading into these mountains where he got back to work, writing the short story ‘Out of Season’ which would later appear in his first publication ‘Three Stories & Ten Poems’ (1923).

Unbeknown to the young Hemingway he was a a trendsetter in putting Cortina d’Ampezzo on the map in years to come as a long line of international celebrities including the likes of Audrey Hepburn, Brigitte Bardot and Sophia Loren became familiar faces in this fashionable resort. Today it’s a who’s who of Italian footballers and their model girlfriends.

But this grandfather of Italian ski resorts is more than just a magnet for the rich and famous being highly regarded as a ski destination. The 1956 Winter Olympics were held here and it has staged numerous World Cup events down the years. It’s a most picturesque destination which is surrounded on all sides by some of the highest peaks of the Dolomites range. There are some excellent slopes for beginners and plenty options for the intermediate skier but advanced skiers may find the resort a little short of challenges. Some of the off-piste skiing is very good whilst the cross country trails are outstanding.

Venice has two airports, both of which are fairly convenient for getting to the slopes of Cortina d’Ampezzo and other resorts within the Dolomite range:

Such proximity means that you can remain indifferent as to which of the airports you arrive at as both are ideal for getting to your destination. Verona and Innsbruck are also possible airports to consider but aren’t as convenient as the Venice ones. 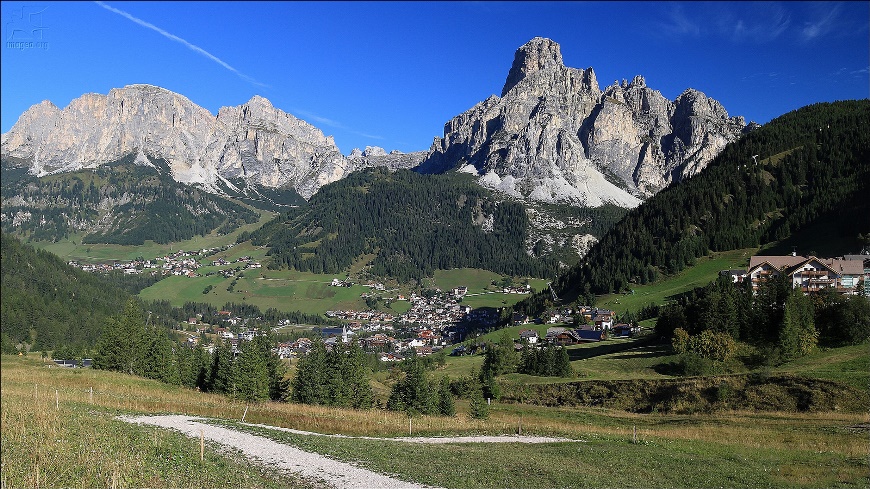 “Corvara in Badia e Sassongher” by imagea.org is licenced under CC BY-ND

Corvara In Badia is another attractive destination with stunning alpine scenery all around. As the crow flies it is only a short distance west of Cortina d’Ampezzo across the Valparola Pass but this is often impassable during the winter months. Skiing possibilities in and around Corvara are exceptional as there’s a network of slopes which are well connected providing visitors with access to around 670 different slopes in a section of the Dolomites known as the ‘Dolomiti Superski Area’. With such an enormous selection of pistes there’s something to suit skiers of all abilities ranging from the gentle nursery slopes to the infamous ‘Gran Risa’ which is the giant slalom course when the World Cup skiing competition visits Alta Badia in December.

Getting there takes about 2½ hours from Venice Treviso (160km) again with Venice Marco Polo almost equally as convenient. An interesting alternative would be to fly into Innsbruck in Austria then take the picturesque E45 road through the mountains to the resort. That journey is 130km and takes around 2 hours so is well worth considering as an option. The Italian city of Bolzano is only 40km to the west but is only of interest if you’re prepared to take that connecting flight from Rome.

Another famous mountain pass in this region is the Gardena Pass which reaches 2136 metres. It lies to the west of Corvara connecting it with another World Cup skiing destination at Val Gardena which hosts the downhill event. Visitors to Corvara can use the ski lifts which enable them to get to the village of Santa Cristina in the Val Gardena valley. Together with Santa Cristina, Selva di Val Gardena is one of the region’s most attractive ski destinations appealing to the type of visitor who wouldn’t be seen dead in the glitz and razzmatazz of Cortina d’Ampezzo.

It offers a charming array of Alpine lodges and a far more authentic experience than some of its neighbouring resorts. Such authenticity is even more pronounced just 30 minutes (22km) south of Selva di Val Gardena in the small village of Canazei. With a population of no more than 2000 people this is the centre of the Ladin culture where the inhabitants still speak the local language and celebrate its traditional festivals. The winter sports industry is the mainstay of the village’s economy.

Whilst Innsbruck (1½ hours) and Verona (2¼ hours) are viable airports for getting to Selva Val Gardena it tends to be Venice (2¾ hours) which is most convenient for skiers due to the selection of flights available from budget airlines.

Madonna di Campiglio is a small village in the Val Rendena of the Dolomites. It might not be the easiest ski resort to get to but once you arrive you’ll realise that the journey was well worth it as it really is one of Italy’s finest ski destinations. The range and quality of pistes is probably the best in the Dolomites with around 150km of runs available reaching as high as 2600 metres. Beginners are well catered for as are intermediate and advanced skiers who might like to try their hand at the exceptional range of cross country skiing options around the Campo Carlo Magno Pass.

You can be fairly flexible with regard to getting there as a number of airports are within reasonable proximity of the resort. Closest is Verona (2¼ hours) which attracts a fair amount of incoming flights these days including the budget operators. Transfers from the Venice airports can take up to 3½ hours and Innsbruck is about 3 hours away.

Ski Transfers to The Dolomites

The drive from your arrival point in Italy or Austria to all of these ski destinations is simply stunning. However, if you’re planning on driving yourself be warned that road conditions in the Dolomites can be fairly unpredictable during the winter months with freezing conditions in the mountain passes and frequent snowstorms on roads with countless hairpin bends. Italian road law requires that you carry snow chains whenever it is snowing whilst in Austria your car must be fitted with winter tyres on snow covered roads from November to April. Be aware of these requirements when hiring a car.

To avoid the potential pitfalls of renting vehicles during inclement weather you’d be far better off arranging a specialist ski transfer before you travel.  Shuttledirect operate such services from both Venice airports, Innsbruck and Verona. A driver familiar with the route and an appropriate vehicle will be waiting for your flight to arrive and will transport you safely and comfortably to your destination. They also have a driver in Bolzano but he’s thinking of seeking alternative employment!