Dubai is well-known as the home of the world’s tallest building and the planet’s only 7-star hotel. It is an adventure playground for families looking for a winter holiday where luxury resorts and enormous theme parks provide entertainment for the kids whilst world-class restaurants, spas and golf courses are available for mums and dads. In addition to this spectacular tourist infrastructure there is a long programme of annual events and festivals which attract visitors to the city in different months of the year.

The New Year in Dubai begins with a bang as more than two million bargain hunters from around the world descend on the city to attend the annual Dubai Shopping Festival. Dating back to 1996 this event started out as an initiative to promote the city’s retail outlets but soon developed into a major tourist attraction in its own right. As well as offering great discounts on their goods the city’s shopping malls also provide some fantastic entertainment which includes concerts, food-related events, shows for children and spectacular firework displays. Traditionally the event begins during the first week of January and lasts for a month although dates may vary. 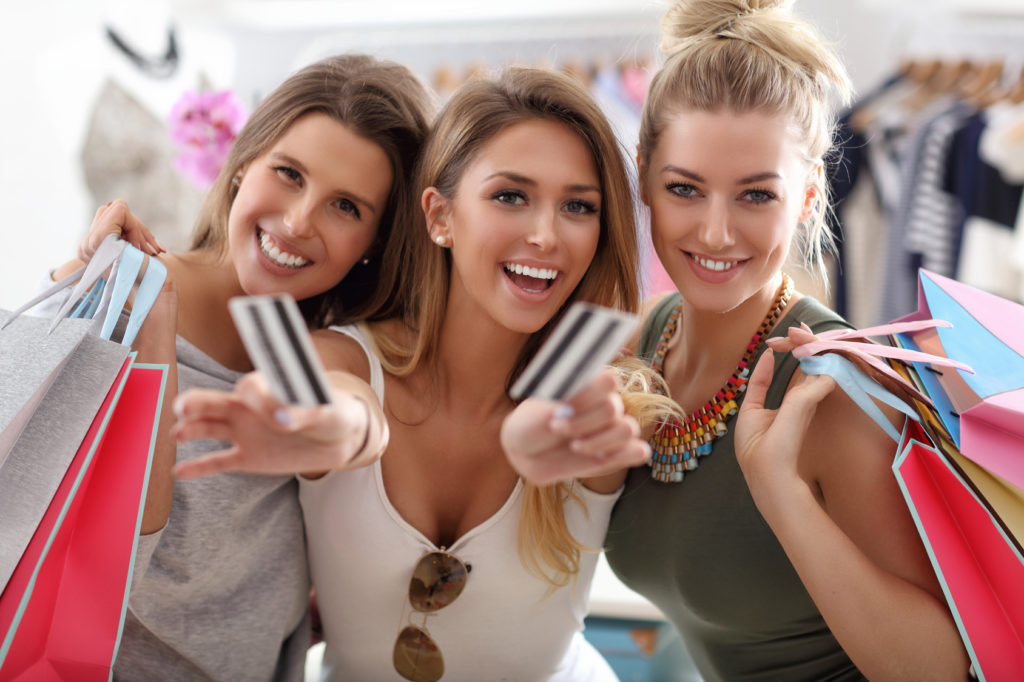 Investment in the sporting infrastructure of Dubai over the years has been phenomenal such that today it boasts three of the world’s top 100 golf courses together with world-class facilities for hosting football, rugby, cricket, tennis, horse-racing and motorsport events. Such is the ongoing importance of sport to the United Arab Emirates that there seems little doubt that they will one day be equipped to host an Olympic Games.

Golf: February marks the city’s first major sporting event of the year when the Omega Dubai Desert Classic tees off on the Majlis course at the Emirates Golf Club. The tournament has been part of the European Tour since it was first played in Dubai in 1989 and has been won by many of the world’s top golfers including Sergio Garcia, Rory McIlroy and Tiger Woods.

Dubai’s other major golfing event is the DP World Tour Championship which comes to town in November and is the climax of the European Tour. Taking place on the Earth course at the Jumeirah Golf Estates it attracts sixty of the world’s top players who compete to win a share of the $8 million dollars in prize money. The year’s professional golfing calendar ends in December with the Omega Dubai Ladies Classic which takes place at the Emirates Golf Club.

Tennis: Some of the world’s top tennis stars arrive in Dubai at the end of February to take part in the Dubai Duty Free Tennis Championships. More commonly referred to as the Dubai Open, this is an official ATP and WTA event which has seen superstars including Roger Federer, Rafael Nadal, Novak Djokovic and Venus Williams win their respective events. It takes place on hard courts at the Aviation Club Tennis Centre. The nearby Irish Village is a popular watering hole for spectators attending the tournament.

Horse Racing: Taking place on the last Saturday in March the Dubai World Cup is one of the world’s richest horse races and the city’s most prestigious annual event. The race takes place at the Meydan Racecourse which attracts many of the world’s best horses, jockeys and trainers who arrive in the hope of winning their share of the $12 million in prize money.

Camel Racing: Historically camel racing used to take place at important community events throughout the region such as wedding ceremonies. However, it has developed into a popular and well-organised sport which offers significant prize money to the winners. Visitors to Dubai who can’t make it for the horse racing might be interested in paying a visit to the Al Marmoom Racetrack which hosts camel racing events on numerous dates from October to April.

Rugby: The Hong Kong Rugby Sevens held its first tournament way back in 1976 becoming a major event on the world rugby calendar. The expansion of that concept eventually led to the creation of today’s World Rugby Sevens Series which consists of ten tournaments taking place at venues around the world. The Emirates Airlines Dubai Rugby Sevens takes place at the Sevens Stadium every December with 16 international teams competing for the coveted trophy. Fans of the sport from all over the world congregate at the stadium for three days of exciting matches at what is considered one of Dubai’s most sociable festivals of the year. 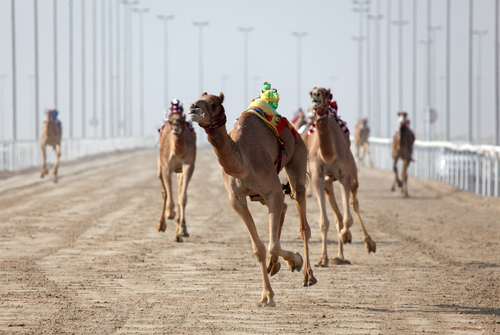 Away from the sporting venues there are plenty musical, cultural and religious events taking place throughout the year. Some of these are on-off events which are listed on the
Official Dubai Tourism Website whilst others are annual events such as the following:

Emirates Airlines Dubai Jazz Festival: Held over ten days in February this music festival consists of performances at venues all over the city by local and international artists before the main event takes place at Dubai Media City Amphitheatre over a three day period. Some household names who have appeared at the event over the years include Tom Jones, Mariah Carey, Sting and Ricky Martin. Such diversity of musical genre has turned the event into more of a general music festival than a jazz specific one.

Emirates Airline Festival of Literature: The month of March sees the arrival in Dubai of some of the globe’s best-known writers who participate in literature related workshops aimed at promoting the love of reading and writing. The event takes place at the InterContinental Hotel, Dubai Festival City.

National Day Festival: An interesting day to be in Dubai is December 2nd when the country celebrates the unification of the seven emirates and their independence from being a British Protectorate. Its a joyous day for the local population who dress in national colours and adorn their homes and places of work with the country’s flag. Visitors are treated to some spectacular firework displays and have the opportunity to visit many of the city’s monuments which are opened to the public.

Religious Festivals: The holy, fasting month of Ramadan is the ninth month of the Islamic calendar which begins on the evening of May 5th in 2019 (dates vary annually). It requires that Muslims abstain from eating, drinking, smoking and having sexual relations from dawn till dusk throughout the month. Visitors are also expected to abstain from eating, drinking and smoking in public during this period and should dress conservatively. With some shops, restaurants and tourist attractions closed or offering restricted opening hours during Ramadan this isn’t the best time to visit Dubai. On a positive note there are some good deals to be had at many hotels over this period and getting served in hotel restaurants during daylight hours is rarely a problem.

Lasting for three days, the feast of Eid Al Fitr marks the end of Ramadan. Once again the city becomes vibrant as friends and family get together to celebrate the ‘breaking of the fast’. Restaurants become very busy, shopping malls are packed with customers and the city’s theme parks see some of the highest attendance figures of the year as families take days out there.

Another important religious festival is Eid Al Adha which takes place in August. This ‘Feast of the Sacrifice’ lasts for four days and includes more spectacular fireworks displays and extra entertainment events at the city’s shopping malls and theme parks. 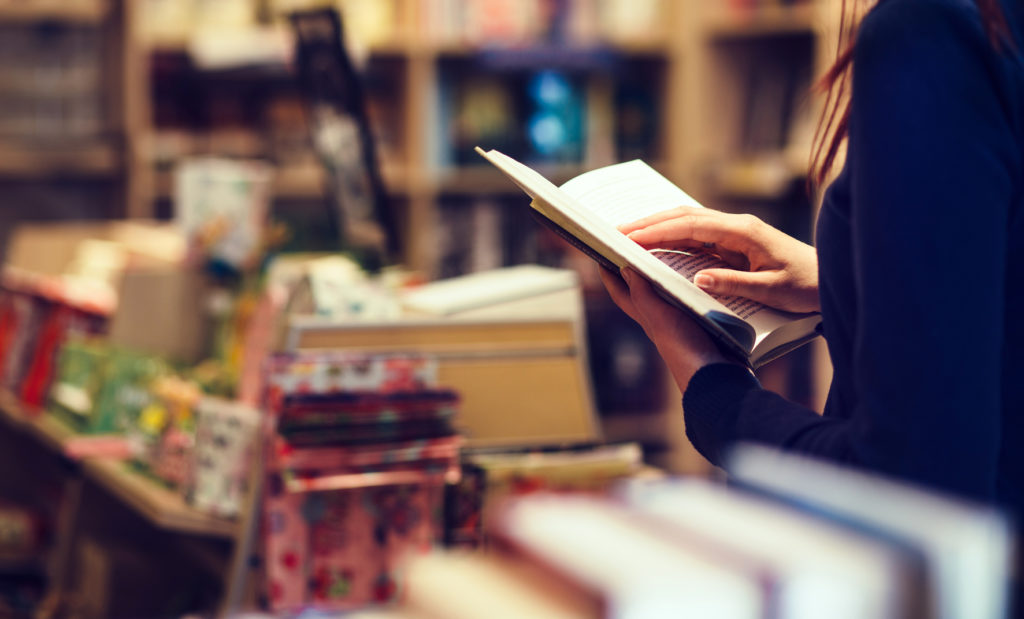 Dubai is a cosmopolitan city of just 2.5 million people which is made up of more than 200 nationalities. As such visitors have the opportunity to try an enormous range of ethnic street foods during a visit. The city’s restaurant scene has seen it fast become one of the world’s great gastronomic destinations where celebrity chefs have established Michelin-star quality restaurants within the premises of luxury resorts and around the popular Dubai Marina neighbourhood. A great time for foodies to visit the city is during one of Dubai’s two great food festivals:

Dubai Food Festival: Taking place in late February this event includes a ‘Restaurant Week’ when diners can enjoy vastly reduced prices for a three-course meal at some of Dubai’s best eateries. There’s also a ‘Beach Canteen’ where pop-up restaurants and food trucks appear on the sand serving an eclectic mix of food items.

Taste of Dubai: This three day event held at the Media City Amphitheatre in March gives food lovers the chance to sample the signature dishes of some of Dubai’s top restaurants at a fraction of what they normally cost. In addition there are numerous cooking workshops and special demonstrations by celebrity chefs who are more than happy to share a few tips with visitors. 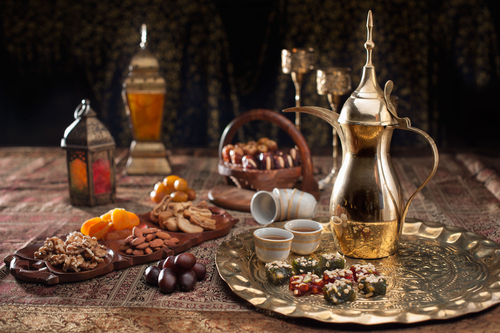