The beautiful Dalmatian coast was a focus for world news in the early 1990s as modern-day Croatia fought for independence from the former Republic of Yugoslavia. One particularly memorable sight on our TV screens was the sight of Serbian gunboats shelling the historic Old Town of Dubrovnik. On a human level this barbaric attack on a UNESCO World Heritage Site caused the death of both civilians and military personnel Structurally it was responsible for the destruction of almost 900 historic buildings and caused damage to almost 12,000 others.

Reconstructing Dubrovnik to its original glory began immediately after the war and for the tourist visiting Dubrovnik today there are few reminders of this ugly episode in the city’s history. Nowadays visitor numbers have reached such levels that the city can barely cope during the peak summer months. Cruise passengers alone account for more than a million visitors per year which has forced the local port authority to limit the number of daily arrivals from cruise ships to 7000.

A recent phenomenon which has been responsible for an even greater influx of visitors is often referred to as ‘Game of Thrones Tourism’. Dubrovnik has served as the main film set for scenes showing the city of King’s Landing which is the capital of the Seven Kingdoms in the show.

The majority of cruise ships arriving in Dubrovnik dock at Port Gruž which lies less than 2km from the Old Town. Most cruise lines provide shuttle transfers to the Pile Gate which is the entry point into the historic centre. Taxis and public buses are available from the port if transport isn’t made available, or you can walk there in about 30 minutes.

If you’re lucky you might be on one of the ships which actually docks in a bay just across from the Old Town in which case tenders will deliver you to the city in just a few minutes. 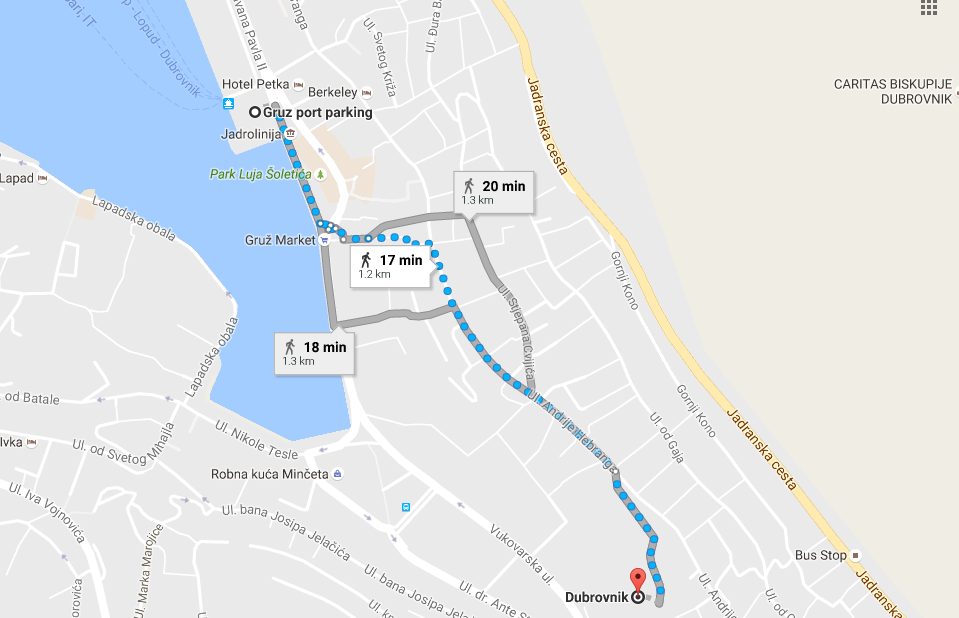 If you happen to be beginning or ending your cruise in Dubrovnik you’ll most likely be passing through Dubrovnik Airport which lies about 20km south-east of the city, just beyond Cavtat. Buses run from outside the arrivals terminal to the bus station located at the Pile Gate then continue on to the main terminal in Gruž Port.

Taxis in Dubrovnik are usually safe and reliable with plenty available on arrival. For convenience’ sake you’re as well to pre-book a private transfer with Shuttledirect. Their vehicle and driver will be waiting for you on arrival to tranport you to the port or to your city hotel if your planning on spending some extra time in the city.

Insider Tip: Please note that all of the Old Town is pedestrianised so vehicles are not allowed to drive directly to hotels located within the city walls but will drop you at the nearest gate to your accommodation.

Getting Around in Dubrovnik

As the Old Town is for pedestrians only you’ll have no choice but to get around on foot which is no problem as it’s such a small area. If you’d like to take a guided tour you should check out Dubrovnik Walking Tours who offer a selection of interesting themed tours. Guides with red umbrellas offer scheduled tours departing from Big Onofrio’s Fountain otherwise you can book private tours online. 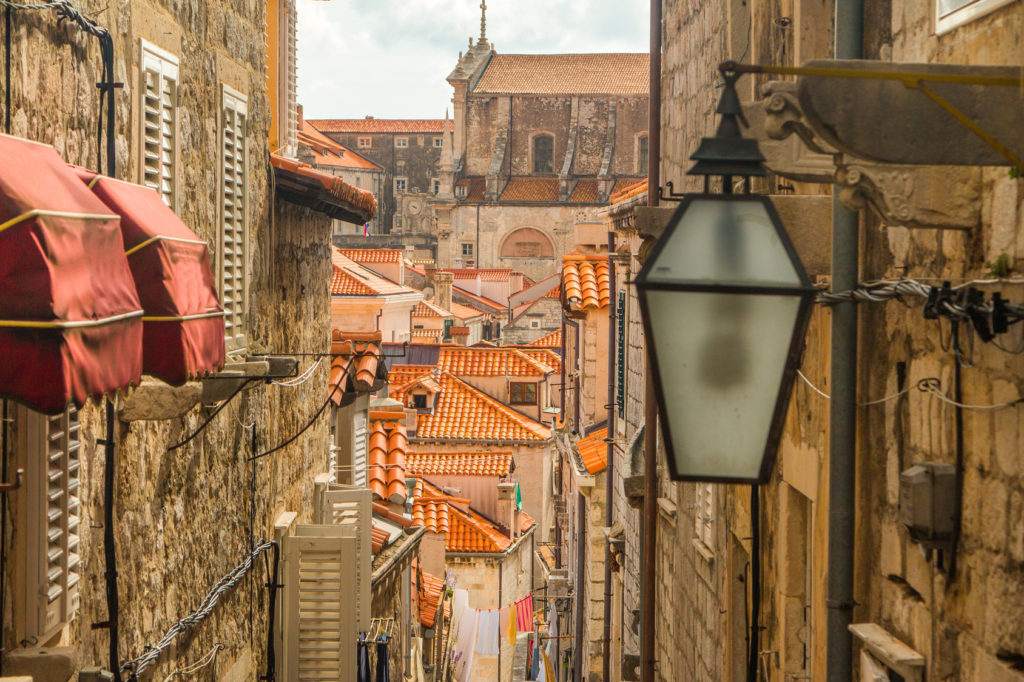 Old Town: The Old Town of Dubrovnik lies within the city walls and is home to practically all of the attractions that you’ll want to visit during your time in port. From the main street, known as the Stradun, you can wander aimlessly up and down an array of small streets to discover a seemingly endless selection of historic sights. Particular highlights within this small area include the Franciscan Monastery, Rector’s Palace and the Cathedral.

City Walls: Perhaps the highlight of a visit to Dubrovnik is a 2km walk around the city walls which surround the Old Town. Dating back to the 13th century these walls feature prominently in the Game of Thrones series which depicts them as fortifications surrounding King’s Landing. From an elevated position on the walls you will notice than many of the red tiles on the rooftops below are relatively new as they had to be replaced after the damage caused during the shelling of the city.

Insider Tip: The Croatian currency is the Kuna which you should attempt to get hold of as soon as possible as US Dollars will rarely be accepted. Some places accept Euros. ATMs are widely available.

Fort Lovrijenac: Keep hold of your ticket for the City Walls Walk as it includes entrance to Fort Lovrijenac, another sight which frequently appears on Game of Thrones. Lying off the western wall of the city this fortress provides great views over the Old Town and to the island of Lokrum beyond.

Franciscan Monastery: Dating back to the 13th century you’ll see this Franciscan Church and Monastery as soon as you enter the Old Town at the Pile gate. The whole complex is a fascinating piece of history but for many visitors the highlight is a visit to the pharmacy which is one of the oldest in the world having been in operation since 1317.

War Photo Museum: (Antuninska ul. 6) Hardly an attraction as such but if you’re interested in learning more about the atrocities of the Balkan Wars of the 1990s then this museum is worth a visit. It displays sobering images from the war in its permanent collection as well as temporary exhibitions of more recents conflicts especially in the Middle East.

Cable Cars: Standing 400m above the city is Srđ Mountain which saw some of the fiercest fighting during the Siege of Dubrovnik. A short cable car journey to the top is a great way to get stunning views of the Old Town below and the islands of the Adriatic in the distance. If you’re fit enough it’s a good idea to walk back down on the marked trail.

Boat Trips: Time permitting you might like to take a boat trip from Dubrovnik’s Old Port. For a short trip just head along the coast to the charming old town of Cavtat for a few hours. For a full-day excursion book one of the tours to the beautiful Elaphite Islands which include Koločep, Lopud, and Šipan. 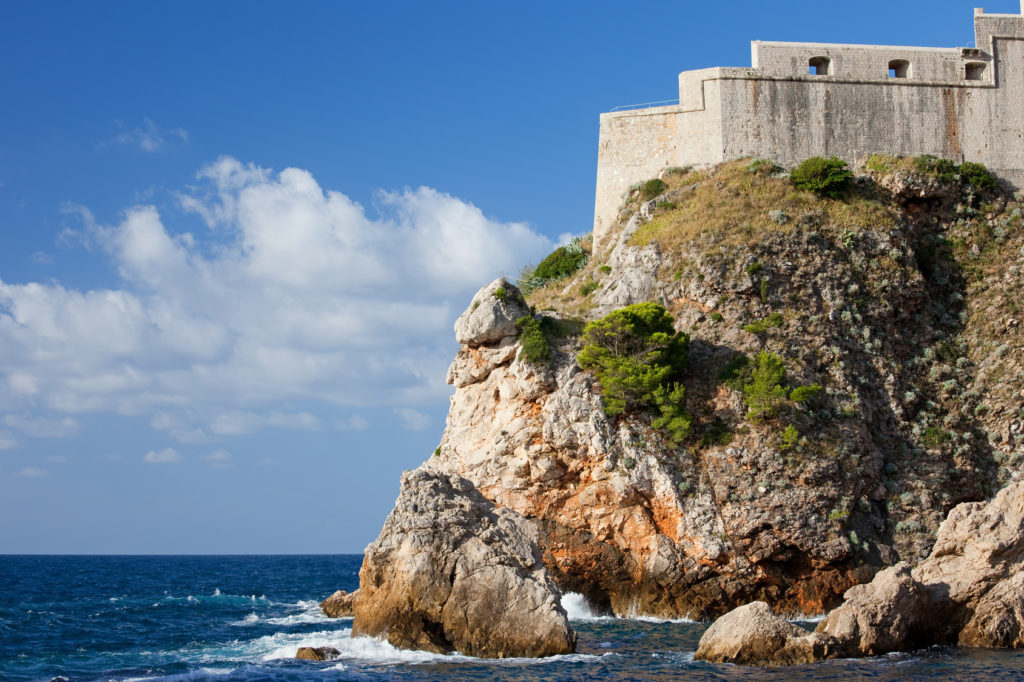 Fort Lovrijenac on high cliff at the Adriatic Sea in Dubrovnik, Dalmatia, Croatia

One Night in Dubrovnik

One of the joys of a night in Dubrovnik is to head down to the old port for dinner on the terrace of a restaurant under the city walls. Highly recommended is Restaurant Lokanda Peskarija (Na ponti bb) which serves an impressive selection of fresh seafood dishes. Alternatively, there’s a fine selection of Italian restaurants located amongst the alleys which make up the Old Town, Pizzeria Mirakul (Nikole Guchetica 6) is very popular. For a more formal dining experience away from the tourist area take a look at Restaurant Amfora (Obala Stjepana Radića 19). This is one of the best restaurants around and is located near to Gruž Harbour where the cruise ships dock.

If you happen to be visiting between mid-July and mid-August and have a night in port then you’re in luck as it’s the Dubrovnik Summer Festival. This annual event consists of a whole range of cultural events held at venues all over the city. In addition, a series of classical music concerts take place in the Rector’s Palace in what is known as the Late Summer Music Festival. Pre-booking of entrance tickets for such events is highly recommended.