The Italian island of Elba has a long history which has seen it settled by the Ligurians, Greeks, Etruscans and Romans. Yet for history scholars the world over it is the fact that Napoleon Bonaparte was exiled here in 1814-15 which is the island’s main claim to fame. Modern-day visitors will feel anything but in exile as they explore an island blessed with a natural beauty consisting of scenic villages and glorious beaches scattered along the coastline.

Lying on the north coast, the island’s capital, Portoferraio, attracts a relatively small number of small cruise ships to its attractive harbour. Visitors can spend a few hours wandering around the city sights which include the Villa dei Mulini where Napoleon resided or can head off on a number of popular excursions. Highlights include a cable-car trip to the top of Monte Capanne (1018m) or a visit to the Parco Nazionale dell’Arcipelago which is Europe’s biggest marine reserve.

The island cannot cater for large cruise ships so just a few privileged, smaller vessels dock in the harbour in Portoferraio. The precise location is at the foot of the Fortezze Medicee which is within easy walking distance of the city centre and its attractions. Be warned that there are plenty hills around some comfortable footwear and a reasonable level of fitness are recommended.

There are plenty taxis available at the port as well as a tourist train during the summer months which takes passengers on mini-sightseeing tours of the city. For travel around the island there are public bus services which depart from outside the ferry terminal which lies 200m west of where cruise ships dock. 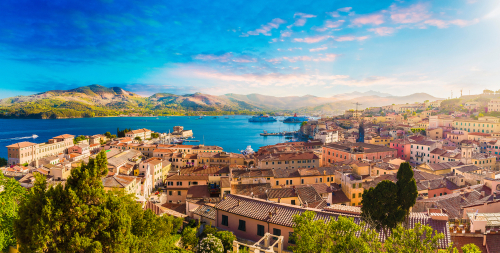 There is an airport on the island of Elba which lies just 13km south-west of Portoferraio. Unfortunately, for international travellers meeting up with cruise ships or charter vessels there are only a few seasonal flights from mainland Italy and Switzerland which arrive here. Therefore, most visitors will have to fly to Pisa or Florence airports then transfer to the port of Piombino from where ferries operate to Portoferraio.

Shuttledirect offer pre-booked private transfers from Pisa Airport (108km) to Piombino. The longer transfer from Florence Airport to Piombino (160km) can also be arranged through their website. 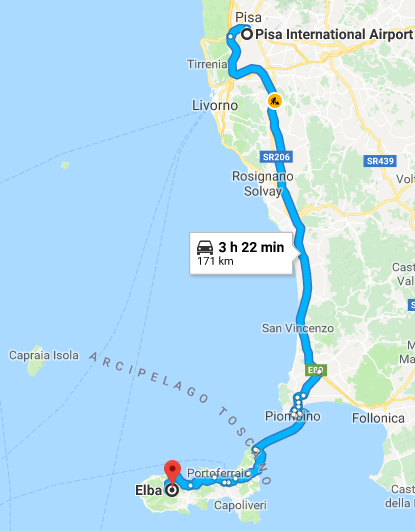 Portoferraio is the island’s largest city whose name translates into English as the ‘Iron Port’ referring to the deposits of iron which were discovered here in the late pre-historic era. Much of the historic beauty we see today is down to the work of Cosimo de’ Medici who fortified the port city in the 16th century building a series of fortresses to protect it against Barbary pirates. Look out for the historic lighthouse at Forte Stella which is visible to cruise ships approaching the harbour where they usually dock in the shadow of Fortezze Medicee. From the north the port is protected by Forte Falcone which now houses a small museum dedicated to Napoleon’s time on the island.

Insider Tip: A lovely spot for lunch which serves excellent local seafood overlooking the harbour is Osteria Libertaria (Calata Giacomo Matteotti, 12). They also have an extensive menu of exquisite pasta and pizza dishes. 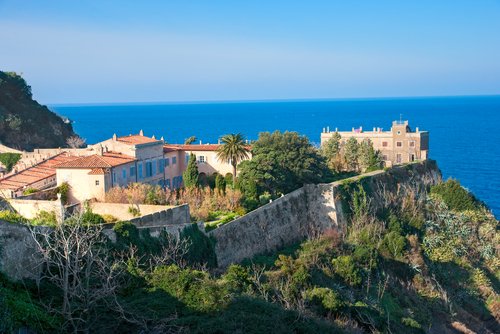 The main attraction pertaining to the Emperor’s 299 days on the island is the Villa dei Mulini (Piazzale Napoleone) which stands high on a hillside overlooking the bay. This was Napoleon’s official residence which is now open to the public but with only a few visitors allowed to enter at any one time. Just on the outskirts of the city is Villa di San Martino which served as Napoleon’s winter residence. It has been converted into a Napoleonic museum.

Another museum worth a visit is the archaeological museum which is housed in the Torre del Martello which you’ll see on the southern tip of the harbour as your ship approaches the port.

Some of the main attractions of the island beyond Portoferraio are as follows:

Monte Capanne: Standing 25km west of the port this is the island’s highest point which can be accessed by cable-car from the historic, hillside town of Marciana. Views from the top are simply spectacular. There’s an interesting archaeological museum in Marciana which displays a collection of artefacts representing the different civilisations who have settled in the region going back to prehistoric times.

Scenic Towns: Whilst Marciana is considered one of the island’s most attractive villages there are a number of others dotted along the coastline. Highlights include Porto Azzurro which lies 13km south-east of the port and Marciana Marina which is an attractive town on the north coast some 16km west of Portoferraio. A shared taxi from the port or a hire car would be the best way to get out to such destinations. 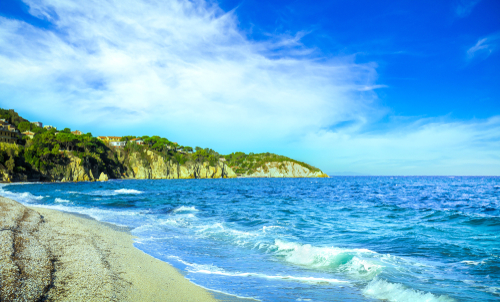 Beaches: The island of Elba is home to some beautiful beaches which attract thousands of visitors from the mainland every summer. The nearest beach to the port is Spiaggia Le Ghiaie which is about 600m north of the port. The best beaches are on the south coast around Lacona which is only 9km south of where your ship will be docked and easily accessible by bus or taxi. Because of the island’s rocky coast snorkeling is very popular from many of its small beaches and secluded coves.

Parco Nazionale dell’Arcipelago Toscano: Just 7km west of the port, this national park is made up of seven small islands where visitors can enjoy walks amongst some quite spectacular coastal scenery. It’s worth checking with your cruise line as to whether they’ll be offering a shore excursion to the reserve as numbers permitted to visit some of the islands is strictly limited.