Opting for a winter holiday in Germany this year? Whether you’re taking the ski pistes or the famous Christmas markets by storm, you’ll find that Germany is nothing short of wunderbar in the winter months… so wunderbar, in fact, that it’s worth staying for the holidays!

While you’re surely looking forward to zooming down snowy pistes and strolling through festive markets, there’s one thing you probably haven’t thought about: Germany’s cuisine, which is frequently overshadowed by its cultural and natural attractions. During the holiday season, however, trying the locals’ favourite drinks, main courses and desserts should be at the top of your bucket list. Here are a few of the country’s specialities that’ll have you coming back for more.

Let’s begin with a festive treat that Germany is actually famous for: its alcoholic beverages. No, I’m not talking about beer (which is worth trying at any time of year!) – I’m talking about eggnog (Eierlikör) and mulled wine (Glühwein). While you may think that the British versions of these world-famous drinks can’t possibly get any tastier, you’ll think again once you take a sip of the German varieties.

It’s believed that eggnog originated in England (no, not in America!), but it’s Germany that has managed to take this comfort drink to a whole new level of deliciousness. When you’re sitting in your ski chalet after a long day on the slopes or are looking for a pick-me-up during your city break, eggnog is sure to revitalise you. After all, what could be better than mixing this creamy drink with sugar, vanilla extract, cinnamon and/or cocoa powder? Well, pouring a sweet swill of it over ice cream or a crumble, perhaps.

Along with eggnog, Germany has another famous beverage up its sleeve: Glühwein. Wondering how it’s different – and arguably better – than British mulled wine? Find out in this blog post. Prost! 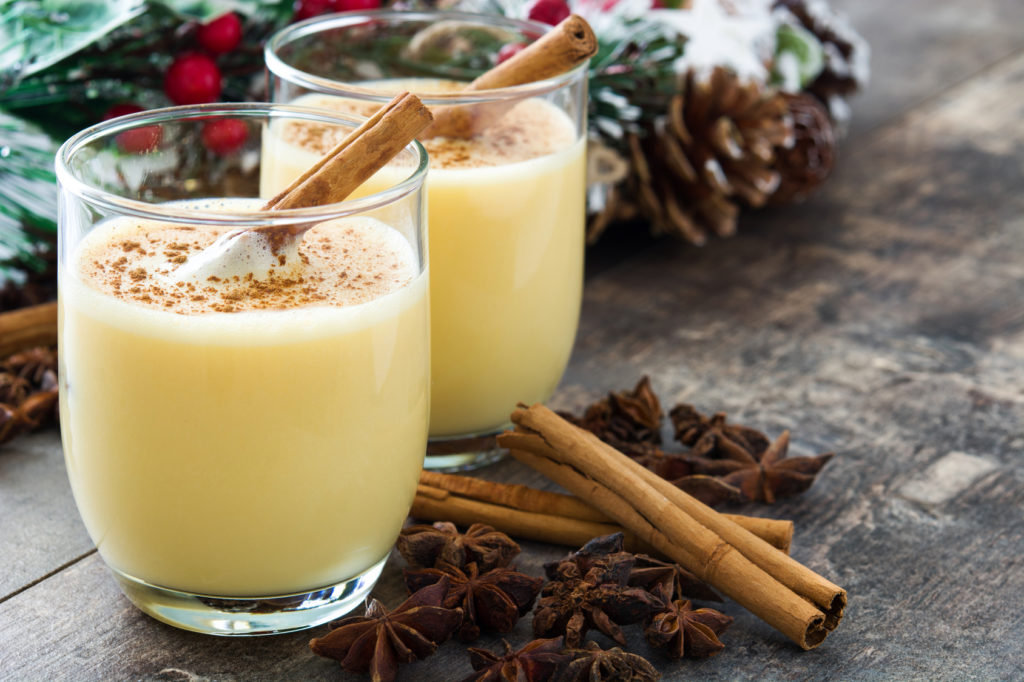 After enticing your palate with eggnog or Glühwein, it’s time for the main event: carbalicious Christmas entrees. Traditionally, German families roast a goose on Christmas Eve, which is stuffed with onions, chestnuts, apples and sometimes prunes. Although you’re probably partial to turkey for a festive dinner, you’re sure to find that goose makes for a juicier – and perhaps more delicious – roast. Supplement it with potato dumplings (Knödel) and red cabbage (Rotkohl), and you’re ready to say “Guten Appetit”. While it’s easy for this comforting winter dish to leave you feeling stuffed, resist the urge to go for seconds – it’s worth leaving room for dessert instead! 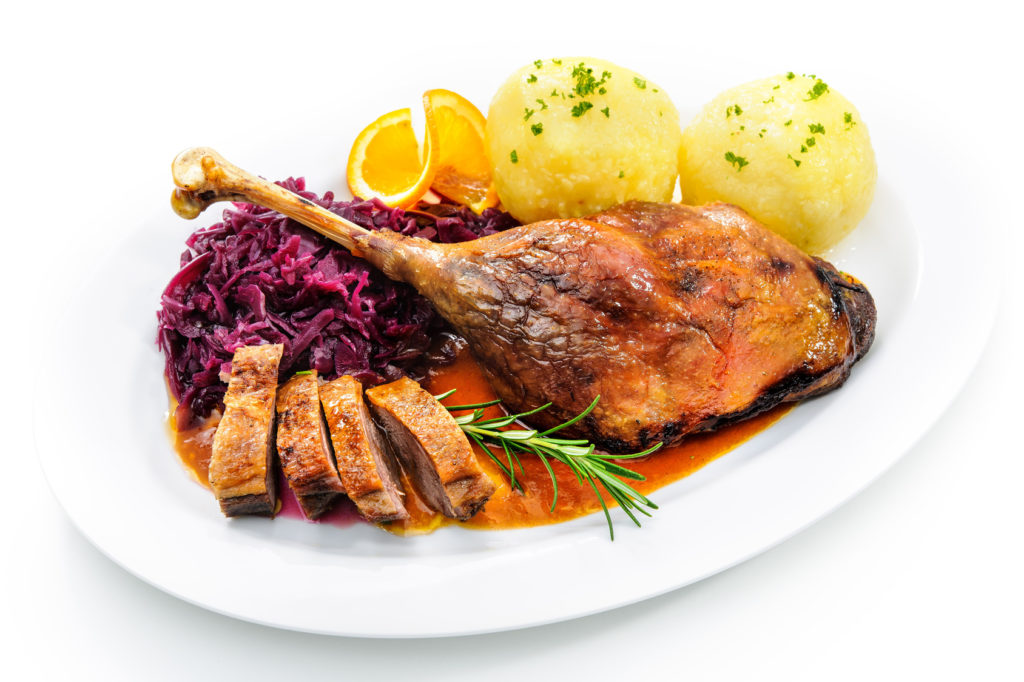 If you think that the above beverages and main courses sounded yummy, just wait: the real show stopper is undoubtedly the dessert. If you’re wise and left enough room, why not sample a variety of Germany’s Christmas classics? While there are countless sweets that perfectly conclude any wintry banquet, the top contenders among locals and visitors alike are usually Lebkuchen, Marzipankartoffeln and Stollen.

Lebkuchen (also known as Pfefferkuchen) are essentially gingerbread cookies – but so much better. You’ll frequently find gooey, heart-shaped versions at Christmas markets, where they’re covered with decorative icing. If you’re travelling with your special someone, you could even introduce them to German pet names by getting a customised one!

On to my personal favourite: Marzipankartoffeln, which translates as ‘marzipan potatoes’. As indicated by their name, these small, round chunks of marzipan are covered with cinnamon and cocoa powder, giving them the appearance of mini potatoes… but the taste of sugary sensations. If you’re ready for your second round of eggnog or Glühwein, complementing it with one of these saccharine treats is an ideal palate cleanser.

Last but certainly not least, no trip to Germany is complete without Stollen, a sweet bread that’s conventionally eaten all throughout November and December. You may even be able to convince yourself that this bread is somewhat healthy: after all, it has a fairly low sugar content, and consists mainly of dried fruits, spices and nuts (let’s just ignore the thick layer of powdered sugar that covers it). If you’re looking for a present to take back home, why not buy a small, beautifully wrapped one? Or, if you’re ready to indulge your taste buds right then and there, prepare for the food coma that eating one of the traditional, two-kilo monsters-of-a-Stollen brings about. 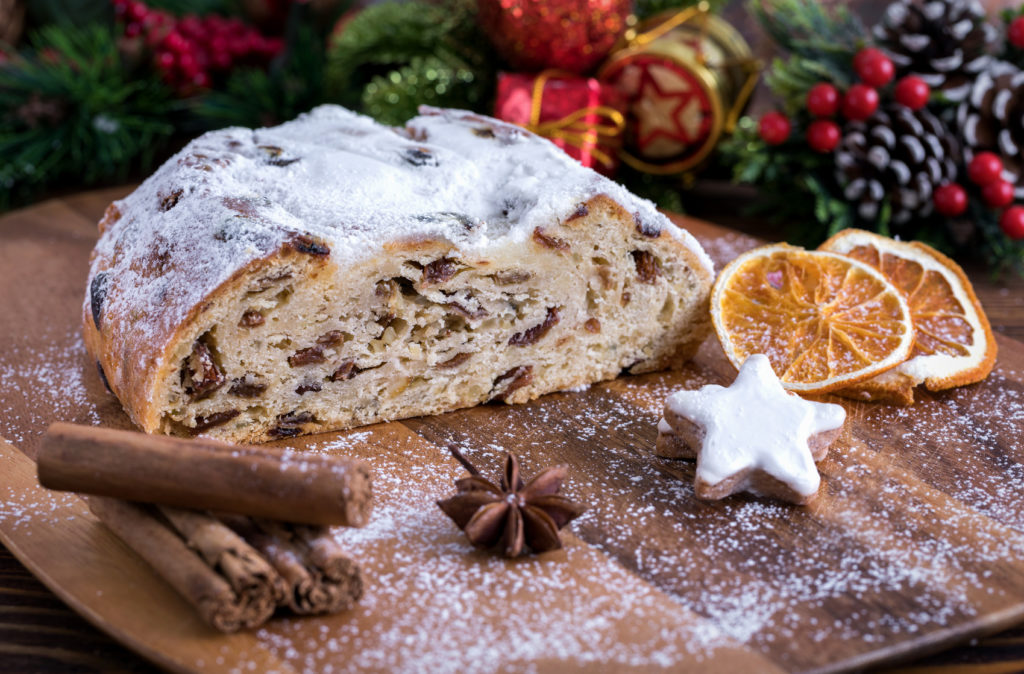