While Amsterdam is a city brimming with art, culture, history and cuisine, its compact centre and ease of getting around makes it perfect for a short visit. As a popular stopover for cruises, it is accustomed to welcoming guests with limited time. While there never seems to be enough hours in the day when you’re on holiday, if you focus on a few key attractions, 24 hours can stretch quite a long way around the enchanting streets and canals of Amsterdam. 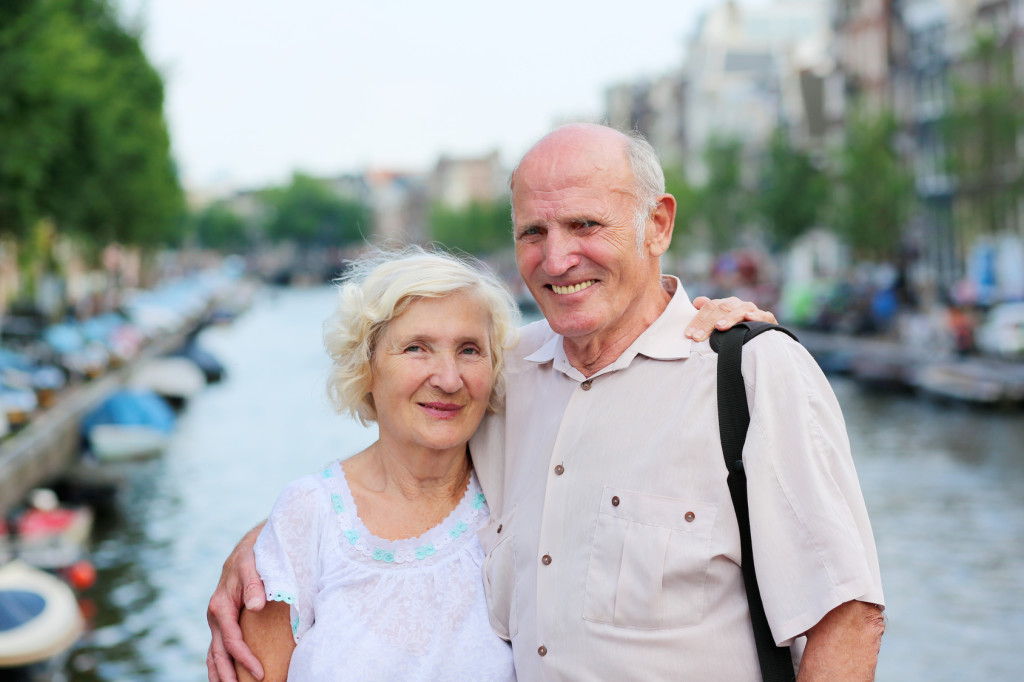 If you want to see the best of Amsterdam in 24 hours, here is one way to do it.

First things first: with only a short time to explore, purchasing a 24-hour tram ticket is the best way to cover a lot of ground in a pretty relaxed way. Many of the premier attractions are accessible by foot (in fact, a great deal of the city’s charm can be discovered by simply strolling around the streets and alongside the canals), but travelling by tram will save you time so you can tick off all the highlights on your itinerary. If you happen to get lost: not to worry! Although Dutch is a difficult language, practically everyone here speaks English and people will be more than happy to help you out.

A one-day tram ticket costs €13.50 and can be purchased from the conductor. Walking is free – and very easy in this city!

When you are getting around on foot, beware not to get hit by a bicycle! Cyclists are among the most prominent players in traffic here, so keep a sharp eye out for them.

Amsterdam’s official Visitor Information Centre ‘VVV’ is located at the Central Station, in the ‘Noord-Zuid Hollandsch Koffiehuis’ (the white wooden house left from the main entry to the station facing the city). Make a quick stop here to pick up a map of the city centre.

The Tourist Information Office is located at Stationplein 1
Opened Monday to Saturday, 9 am – 5 pm; Sunday 9 am – 4 pm
There is an elevator for wheelchair users at the entry of the GVB Office (ring the bell)

Renowned as one of Europe’s premier art capitals, there are a number of important museums, the most iconic of which are the Rijksmuseum and the Van Gogh Museum. As luck (or good planning) would have it, they’re right next door to each other in the delightful Museumplein area – the architecture of which is an attraction in itself, including the giant IAmsterdam sculpture. 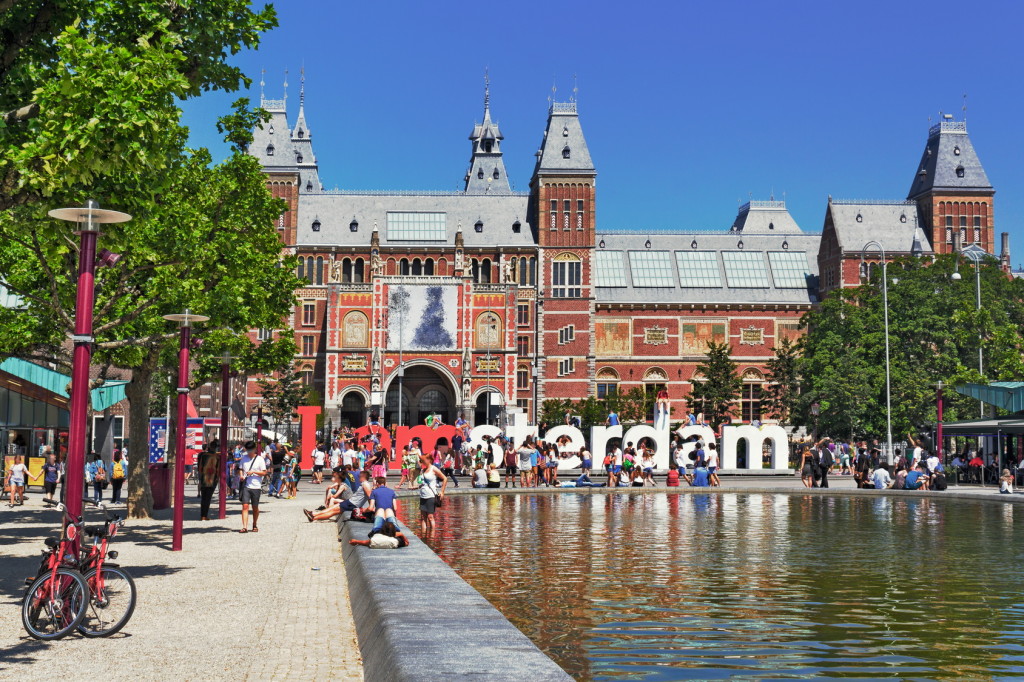 Rijksmuseum, with the IAmsterdam sculpture – a popular photo opportunity for visitors to the city.

Get off at the Rijksmuseum tram stop.

Special interest tip: If you’ve got some time up your sleeve (or a particular interest), you may want to consider some of these other museums too:

Throughout The Netherlands, you’ll find an interesting phenomenon: the snack wall. This self service system allows you to skip the queues at the counter and grab your snack – whether it’s a ‘kroket’, a ‘frikandel’, a ‘bamischijf’ or any of the other typically Dutch snacks – from a small, heated cubby hole upon inserting your coins.

Just a short tram ride away is one of the city’s most iconic attractions, Anne Frank’s House. If you can possibly book ahead of time online it’s well worth it to jump the queues. Failing that, try to come early or later in the day. While from the outside the building has been made over with a modern façade, on the top floors, which contain the actual rooms where the Frank family hid away for over two years, the palpable sense of history is undeniable.

Make a stop at Rembrandtplein to take a picture of the impressive statue that was erected in honour of the famous Dutch painter Rembrandt van Rijn, who had a house nearby and to whom the famous square lends its name.

For the sheer delight of people watching, and a taste of the city’s unique architecture, all roads (and canals!) lead to the 13th century Dam Square. It’s just a short walk from the Amsterdam Centraal tram stop and is a wonderful place to enjoy the genuine local life of the city.

Apart from a vibrant market, the beautiful Nieuwe Kerk, and the city’s most upmarket retail outlet, De Bijenkorf, Dam Square is also notably home to the magnificent Koninklijk Palace (the Royal Palace). It’s well worth a visit to explore its opulent history-laden interiors if you have time, but even if you decide against going inside, its exterior is impressive enough. 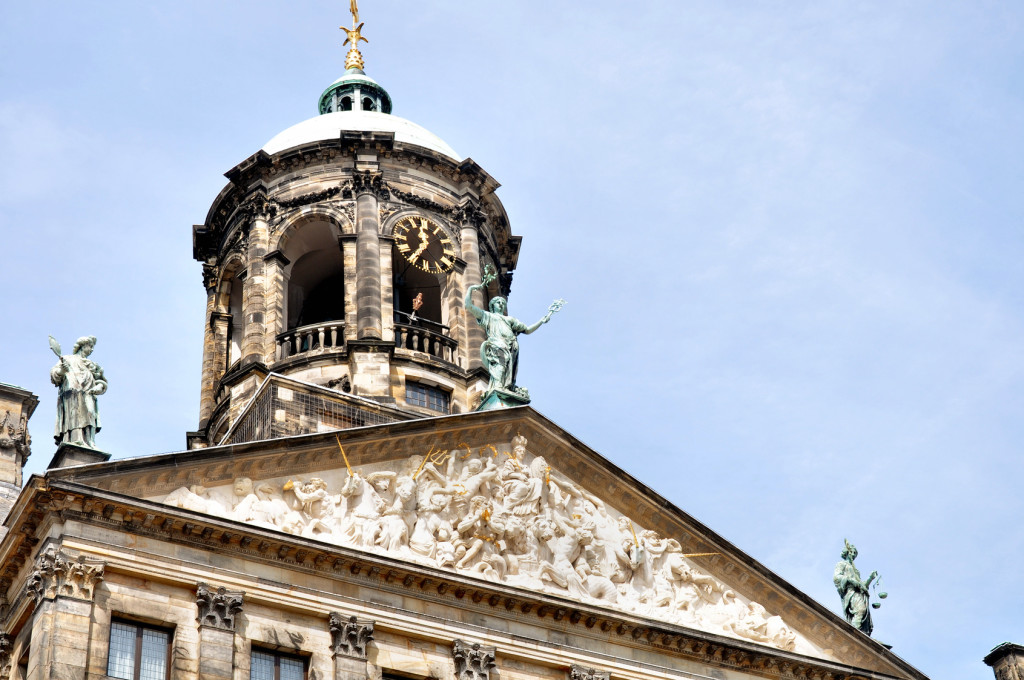 Detail of the Royal Palace on ‘De Dam’, Amsterdam.

Soak Up the Tradition of a “Brown Café”

While a brown café, or ‘bruine kroeg’, might not sound too appealing, in fact the name refers to the lovely traditional eating and drinking establishments of the city. Characterised by heavy timber décor, nicotine stained walls and a distinctly authentic ambience, this is where you’ll discover the real spirit of the city.

Just a short stroll from Dam Square and Anne Frank’s House, at Gravenstraat 2, you’ll find Café Belgique, a delightfully quirky brown café – order the ‘bitterballen’ (a savoury meat-based snack typical to The Netherlands) and you won’t be disappointed!

Fine dining tip: If you want to turn lunch into a special occasion, there’s a secret tucked in behind the Rijksmuseum in the form of ‘Rijks’ restaurant. This sophisticated, upmarket establishment offers outstanding food and wine in a tranquil, historical setting.

Special interest tip: Coffee lovers have come to the right place, with The Netherlands being declared the number one coffee drinking capital of the world! Read on for some great insider tips on the local coffee culture. 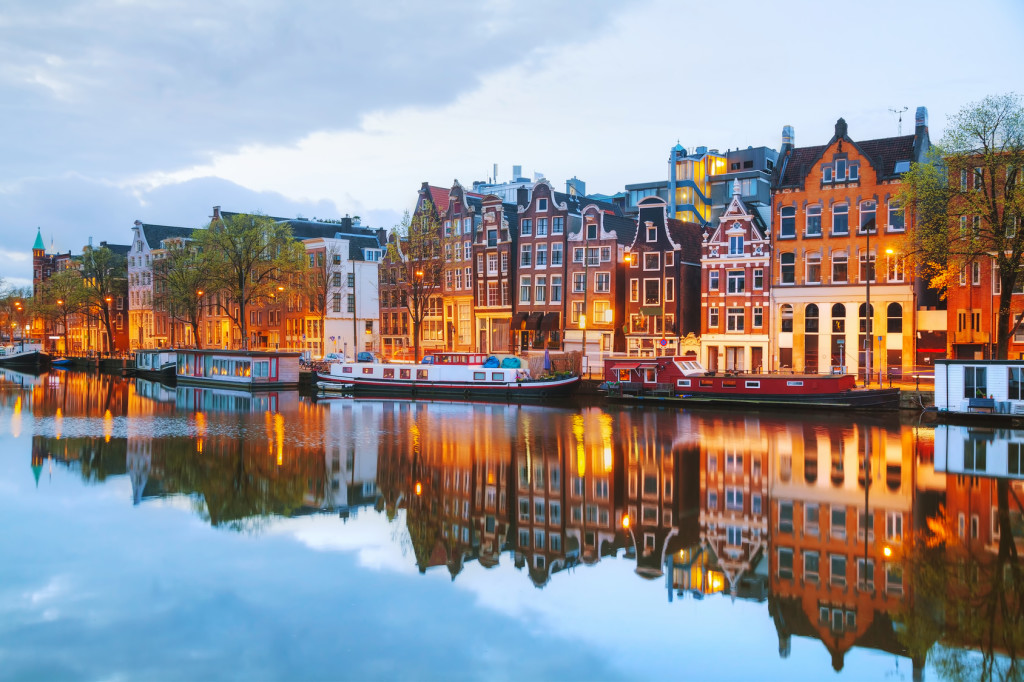 City view of Amsterdam from the water.

Even if you’re on a cruise stopover, as long as you’ve got your sea legs you shouldn’t miss a very different kind of cruise – along the delightful UNESCO designated canals that wind their way through the city! There’s a host of canal cruises from which to choose (a hop-on, hop-off option is a great option) and it will give you the chance to see the picturesque houses (and houseboats) from a different viewpoint.

Canal boat cruises start from around €13.

Shopping in Style at the Kalverstraat

If your cruise suitcase has a few more inches of space left, the fancy ‘Kalverstraat’ is where you’ll want to fill them up. Being the most expensive shopping street in the capital, you will find a satisfying range of national and international brand stores here.

Experience the Musical Magic of a Classical Concert

The fabulous acoustics of the Concertgebouw (the Royal Concert Hall) are legendary, and for classical music aficionados, taking in a performance at this acclaimed venue is the perfect way to complete the cultural circle on your stopover. With three richly decorated performance spaces, you can take your pick from an intimate recital, a chamber or quartet performance, or a full orchestral extravaganza in the Main Hall. 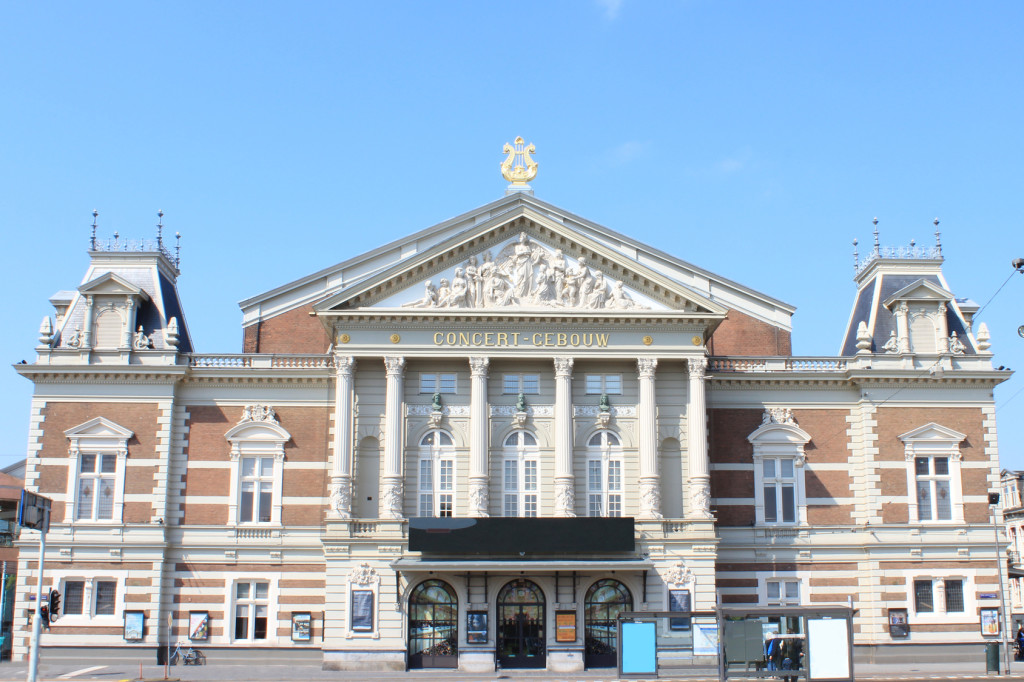 The Concertgebouw is located at Concertgebouwplein 10. The box office is open Mon-Fri 1pm-7pm and Sat/Sun 10am-7pm. Tickets available after 7pm for that night’s performances if available.

Recommended read: A Guide to Amsterdam’s Most Authentic Music Venues

Even in the space of just a one-day cruise stopover it’s certainly possible to squeeze in many of the highlights of this lovely city without feeling too pressured. It’s partly because the city is so compact and accessible, but it’s also due to its laidback, friendly ambience and the sheer conviviality and helpfulness of the locals. Is this Europe’s most perfect one-day cruise stopover? It might well be…

How to Get to Amsterdam Central from the Cruise Port

As one of the most popular European capitals for cruise arrivals and departures, getting into the centre from the Port of Amsterdam is easy – even with bulky, heavy luggage. For the most convenient transfers to central Amsterdam, pre-book with Shuttle Direct and our friendly driver will meet you at the Passenger Terminal, where your cruise docks, and take you directly to your overnight accommodation, or any location to begin your exploration.

You can also take public transport from the Cruise Port into the centre of the city, with the number 25 tram taking you to the main central train station. 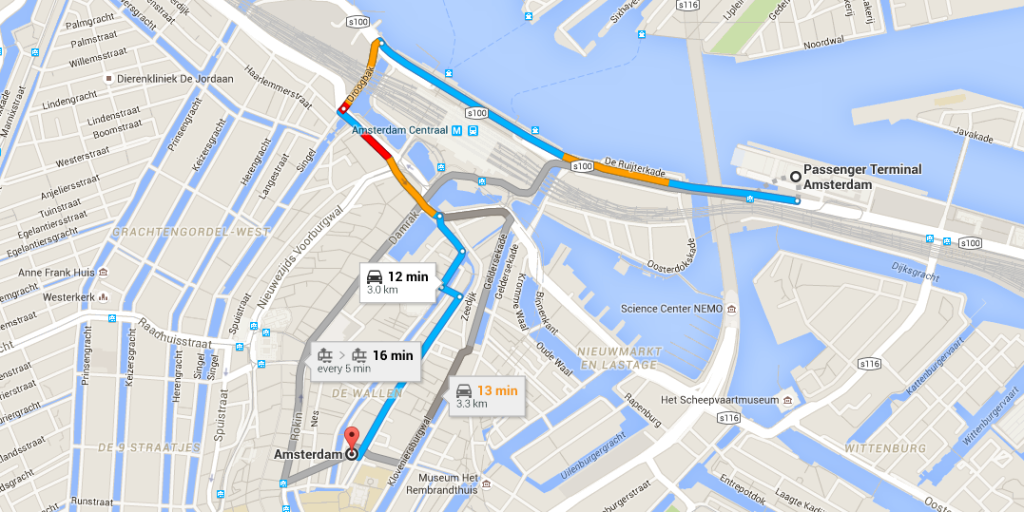 Getting from the cruise port to Central Amsterdam and back is easy with a pre-booked Shuttle Direct transfer.