Nestled into the Alpine landscape of Austria’s Tyrol region, Innsbruck is everything you could hope for from an Austrian city. Its cobbled city centre streets, 500-year-old architecture and Gothic churches contribute to the city’s chocolate-box beauty. But look a little closer and you will find that startling modern art, cutting edge design and prize-winning contemporary architecture are also at the cultural heart of this fascinating city. 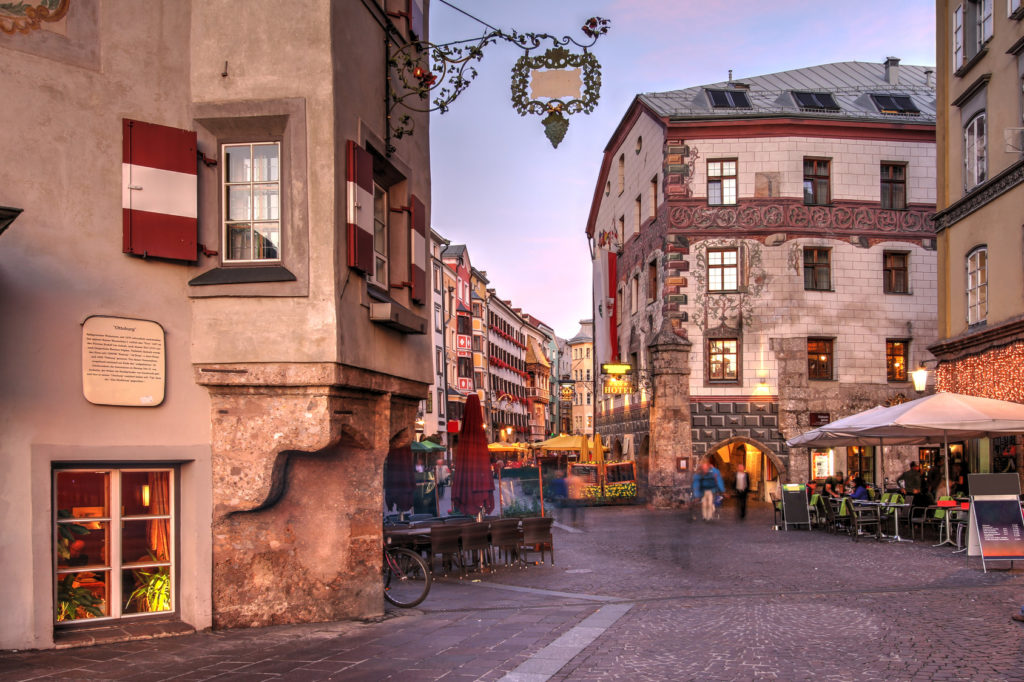 From the beautiful main square of the Old Town with its landmark Goldenes Dachl – an ornately decorated balcony from which, 500 years ago, royalty would have watched jousting in the square below – to the rococo splendour of its palaces, Innsbruck drips with the evidence of its rich Central European history. 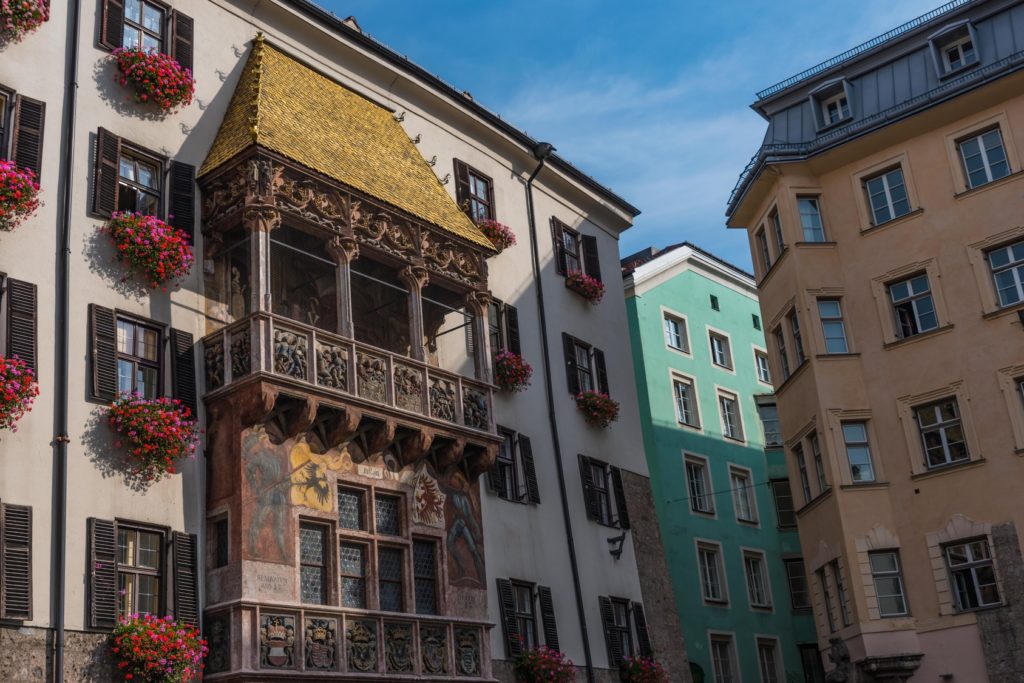 On the edge of the historic heart of Innsbruck lies the stunning Gothic Court Church of Maximilian I. Built in 1553 by Ferdinand I, the church was created as a memorial to Maximilian and includes his empty tomb (he wished for his remains to be interred elsewhere) surrounded by the magnificent bronze statues Maximilian commissioned for his own graveside. 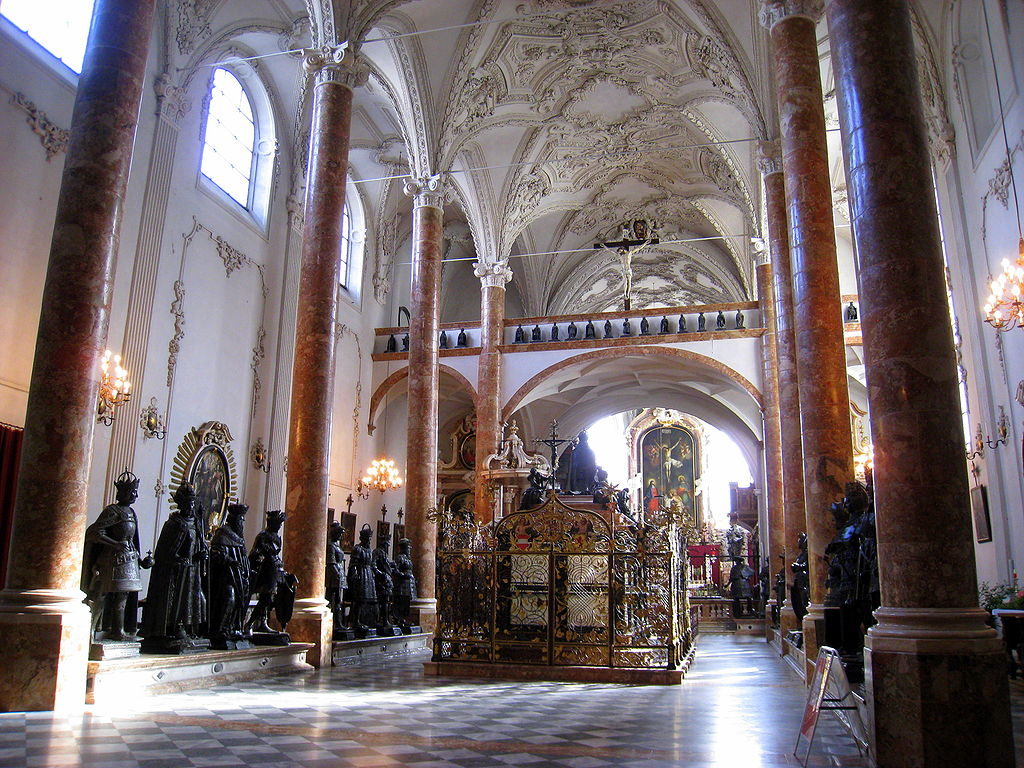 The impressive Gothic architecture has been complimented by later Renaissance additions such as the stunning Ebert organ. The organ is one of the world’s oldest, still in use today.

The Hofburg Imperial Palace is a fascinating melting pot of key parts of Tyrol history and architecture. Originally built by Maximilian in 1500 in the Gothic style, it was then rebuilt 250 years later by Maria Theresa in a Baroque style, and the Inner Apartment refurbished again by Archduke Karl Ludwig in the nineteenth century. 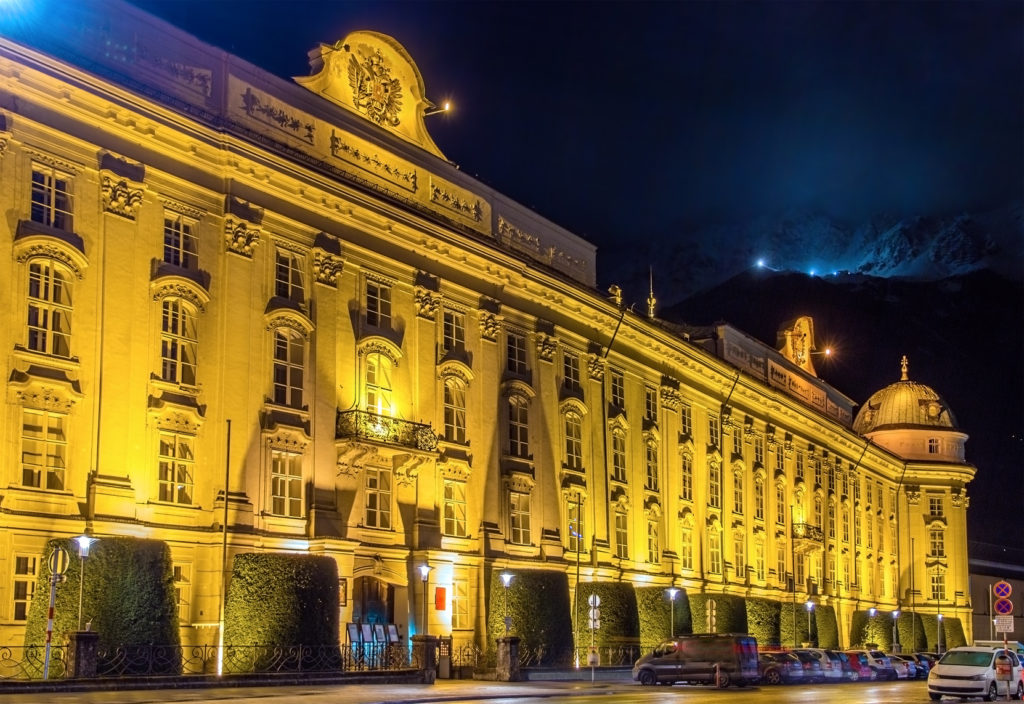 Visit the Gothic Cellar, built in the style of a large hall with a vaulted ceiling and stone columns, or the Kürnstube where Maximilian kept his hunting trophies, and you will see the palace as it was originally. The façade and many of the apartments, however, were recreated in the lavish Baroque style by Marie Theresa. Ludwig then introduced the lavish silks and furniture of the Rococo style when he refurbished the Inner Apartment for his sister-in-law the Empress Elisabeth.

All of these stunning styles are still visible today, making a visit to the Imperial Palace like walking through the region’s architectural history.

Perched on the hillside above Innsbruck, Ambras Castle is more than an impressive piece of Austrian Renaissance architecture: it is one of Austria’s most picturesque art galleries. Take in the history of Tyrol while admiring the work of some of the greatest masters of the period, who were brought in to paint the portraits of Habsburg rulers and luminaries from the fourteenth to the eighteenth century. 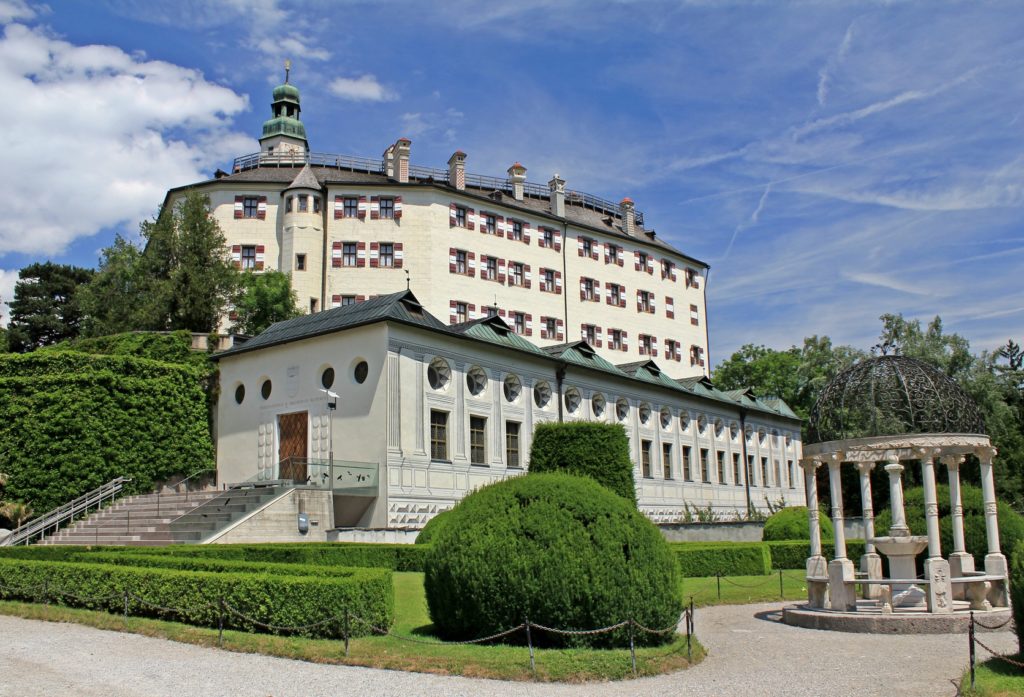 Rubens, van Dyck, Velázquez and Cranach are just some of the artists represented on the walls of the castle. Other elements to admire are the castle’s Strasser Collection of Glass from the Renaissance and Baroque era and an impressive collection of armour.

Despite all of this impressive historic charm, Innsbruck is a modern city too. You only have to look at the startling modernity of its funicular stations, awarded a prize for design by the European Union Prize for Cultural Heritage/Europa Nostra, to see that this is a city which looks forward as well as back.

For those interested in modern architecture, the Nordkettenbahn stations designed by Zaha Hadid are only the beginning. There are a raft of treats to uncover here, like the crystal tree at the Kristallwelten, designed by Alexander McQueen, and the Bergisel Ski Jump, also designed by Hadid. 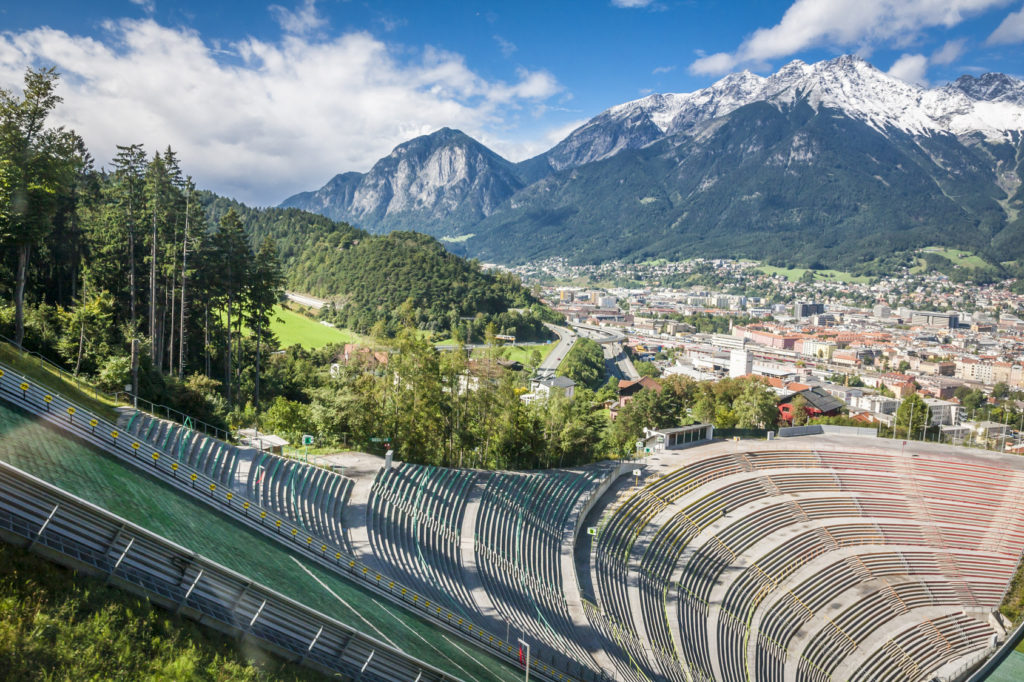 The space age ski jump, designed as an Olympic venue in 2007, now has a restaurant and viewing terraces, each with stunning panoramic view of Innsbruck.

While a walk around the Old Town of Innsbruck is a cultural voyage in itself, those looking for a deeper cultural experience should visit some of the city’s fascinating art galleries and museums. 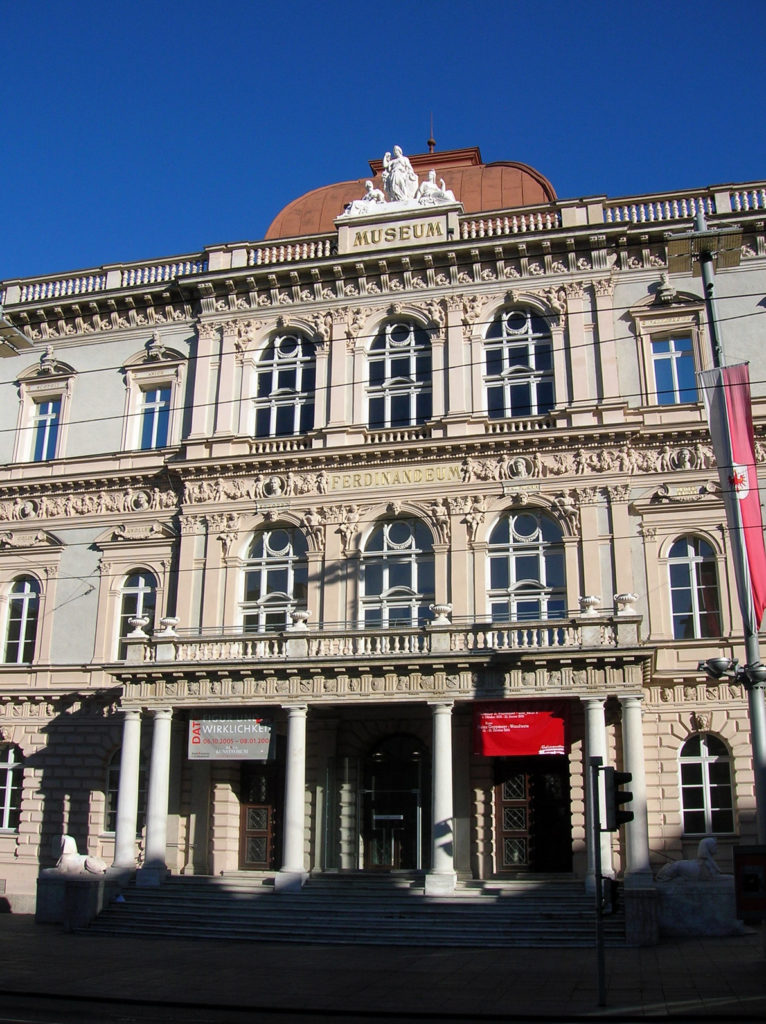 To learn more about the Tyrol region, including its history and traditions, visitors should spend a few hours wandering around the Museum of Tirolean Regional Heritage, the Tiroler Volkskunstmuseum. Located beside the stunning Court Church, the museum contains a rich variety of Tirolean artefacts from folk art and handicrafts to examples of Gothic, Renaissance, Baroque and Rococo craftsmanship.

One of Austria’s largest museums is the Tyrolean State Museum, known as the Ferdinandeum, in the centre of Innsbruck. Established in 1823, it contains exhibitions of art history, archaeology, history, natural sciences and music. Its galleries exhibit work by the old masters such as Rembrandt and Bruegel, local artists such as Klimt and Kokoschka, as well as many modern artists in the modern art section on the third floor.

How to Get to Innsbruck 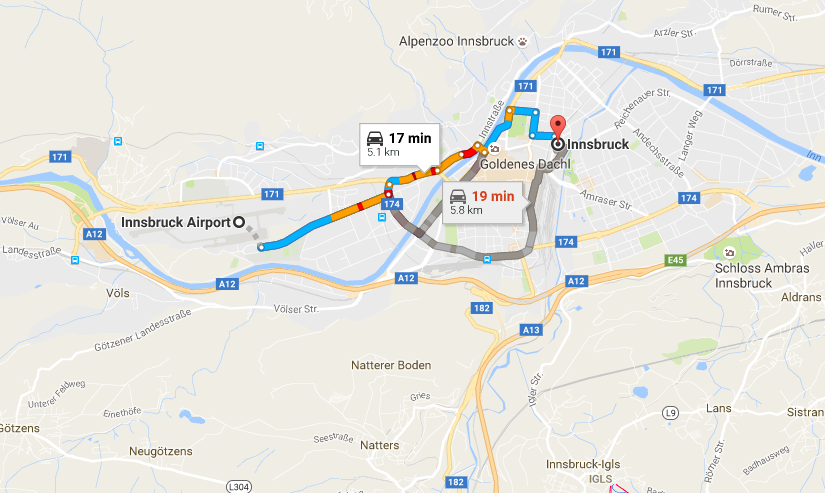 Direct flights to Innsbruck Airport fly regularly from London’s Gatwick Airport with a number of airlines including British Airways and EasyJet. Indirect flights are also available from many other UK airports. For a fast transfer from the airport to your hotel remember to book a group or individual transfer with Shuttle Direct before you set off.

There is no direct train from the UK to Innsbruck but those prepared to change trains in Paris and Zurich can then take the local train through the stunning Alberg Pass to arrive at Innsbruck Station. A Shuttle Direct transfer can be arranged to take you from the station to anywhere you wish to go in the city.

Hotel Tautermann – A great budget option, the family-run Hotel Tautermann is close to the major sights of the Old Town of Innsbruck as well as offering stunning panoramic views of the nearby mountains.

Hotel Goldene Krone Innsbruck – This three star, family-run hotel in the centre of Innsbruck offers guest the chance to look out over the city’s historic Triumphal Arch as they enjoy a traditional Austrian breakfast. Set in a Baroque building, the modern rooms and friendly 24-hour lobby bar make the Hotel Goldene Krone a great place to stay on a mid-range budget.

Grand Hotel Europa – For a touch of luxury in the centre of Innsbruck you should try the Grand Hotel Europa; you’ll be in good company too, as previous guests have included Queen Elizabeth II, the Prince of Monaco and even the Rolling Stones. Stylish modern rooms complete with marble bathrooms and Alpine views compliment the traditional Tyrolean styling of the restaurant where delicious local food is served.

Providing a reliable, friendly airport transfer service across Europe and North Africa, Shuttle Direct transfers offer a comfortable and convenient way of getting from the airport or train station directly to your hotel. Book a car before you set off with Shuttle Direct’s easy online booking system and you can rest assured that your driver will be waiting for you when you arrive.