Exotic, energetic and always exciting: a visit to Istanbul rates as one of the most extraordinary travel experiences in the world. While you could spend weeks exploring this ancient capital, realistically you probably won’t have that long, especially if you’re visiting other parts of Turkey. But, good news: it is possible to take in the important highlights on a three-day itinerary without reducing yourself to exhaustion.

Day One: The Sultanahmet

The historic Old City of Istanbul is known as Sultanahmet, and it’s here you’ll find some of the most iconic attractions, including:

It makes sense to throw yourself headfirst into the most-visited site in Istanbul first up: the fabulous Grand Bazaar. One of the oldest covered markets in the world, this seething melee of chaos and colour houses up to 5,000 traders packed into its tangle of streets and laneways. Crowds are inevitable (with up to 400,000 visitors a day), so your best bet is to hold on tight to your valuables and surrender to the madness!

With shops roughly grouped into the type of goods they sell – everything from hand painted lanterns, glazed tiles, alabaster sculptures, to intricate Turkish carpets, jewellery, leather goods and brassware – the Grand Bazaar is a real-life Aladdin’s cave where you can get anything you want at a price – just what that price is depends on how good your haggling skills are!

The easiest way to get to the Grand Bazaar (also known as Kapalı Çarşı) is by tram, to Beyazit, Üniversite or Sirkeci stations. There are four main entrances, two at each end. Open Mon-Sat 9.00am-19.00pm, closed on Sundays.

Just 15 minutes’ walk from the Grand Bazaar is the breathtakingly beautiful Hagia Sophia (Aya Sofya), one of the city’s most important architectural and religious sites. Starting life as a church, then converted to a mosque, it’s an intricate fusion of Byzantine and Ottoman design, with its vast interiors decorated by priceless mosaics (made up of over 30 million gold tiles or ‘tesserae’) and religious artefacts.
Open every day except Monday from 9.00am-17.00pm, later in summer. Adult admission 30TL, around €9, and free for under 12s. Hire a private guide or buy an Istanbul Museum Pass and you’ll jump the queues.

Directly across from the Hagia Sophia on the other side of Sultanahmet Park, the Blue Mosque (Sultan Ahmet Camii) is the enduring image of Istanbul’s skyline. So named for the countless 17th century blue ‘Iznik’ tiles that decorate its impressive interiors, the scope of its architectural beauty stretches across five domes, six minarets and several courtyards. Built to rival the size and beauty of the Hagia Sophia, it’s a matter of opinion as to whether it succeeds – but a visit to both is an absolute must.

The Blue Mosque is open every day and is free of charge, but do try to avoid visiting at prayer times as it’s a working mosque. Women must wear head scarves.

No trip to Istanbul would be complete without cruising the Bosphorous, the strait that divides Europe and Asia. There’s a huge range of cruises and boat trips available, starting from a short jaunt on a commuter ferry right up to a full day of sightseeing including lunch.

Full day excursions from the city centre with a couple of hours stopover to explore Anadolu Kavağı start at TL25, about €8, and depart from the docks at Kabatas, Eminönü, or Beşiktaş. 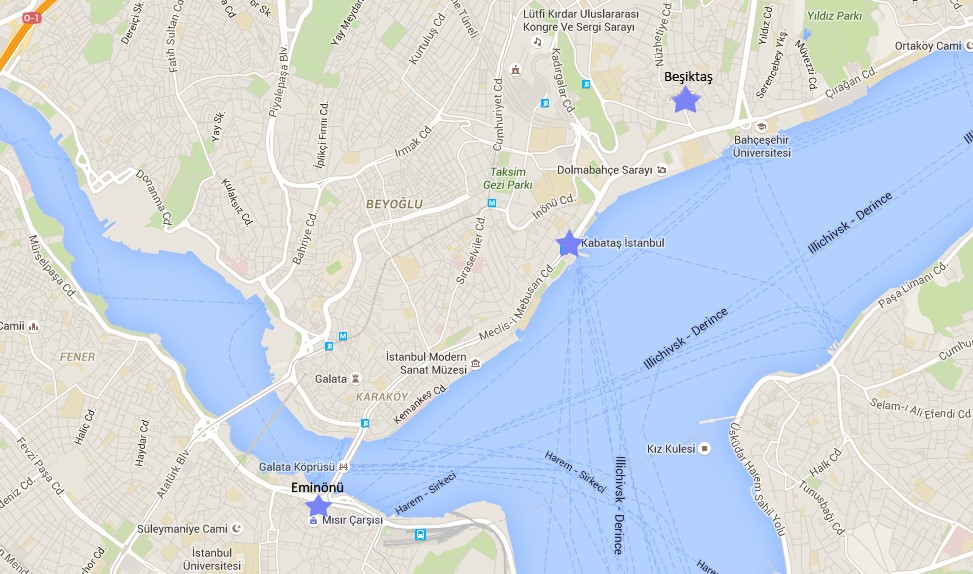 The last day of your three-day itinerary takes you back to the Old Town and the magnificent Topkapi Palace. With several different parts to the palace, it’s not unrealistic to spend an entire day here. It’s a feast for the eyes at every turn, with the dazzling riches of the Treasury, the ornate Rococco fountains in the courtyards, and the vast, labyrinthine interiors of the Harem. 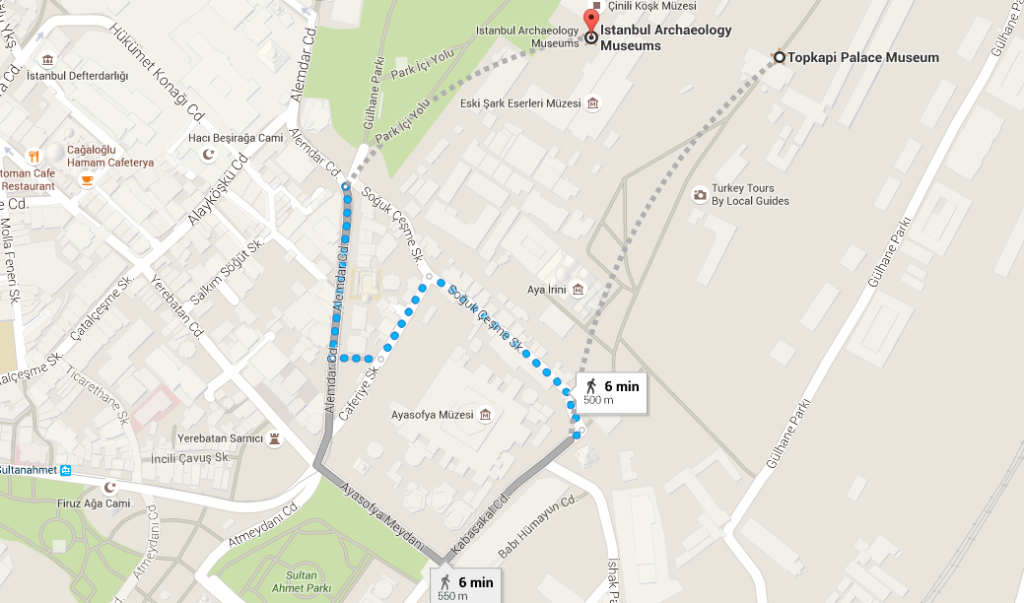 If you’ve still got some time up your sleeve you can also visit the fantastic Archeological Museum, which is just down the road.

While nobody could claim to get to know a city in just three days, this simple, manageable itinerary will give you a pretty good insight into Istanbul – and plenty of reasons to come back for more!

How to Get to Istanbul

Flying time from the UK to Istanbul is just under four hours, with plenty of cheap flights available from a range of budget carriers. From the airport you can get into the city on public transport by metro or airport bus. Metro trains into the city run about every 15-20 minutes, then you can take a tram into the Old City. The airport bus runs to a regular schedule from the airport into Taksim Square in the centre of the city.

For the easiest way to get from Istanbul Airport to Istanbul, our Shuttle Direct private or shared transfers can transport you and your luggage direct to the door of your accommodation – and back again when you’re ready to leave. 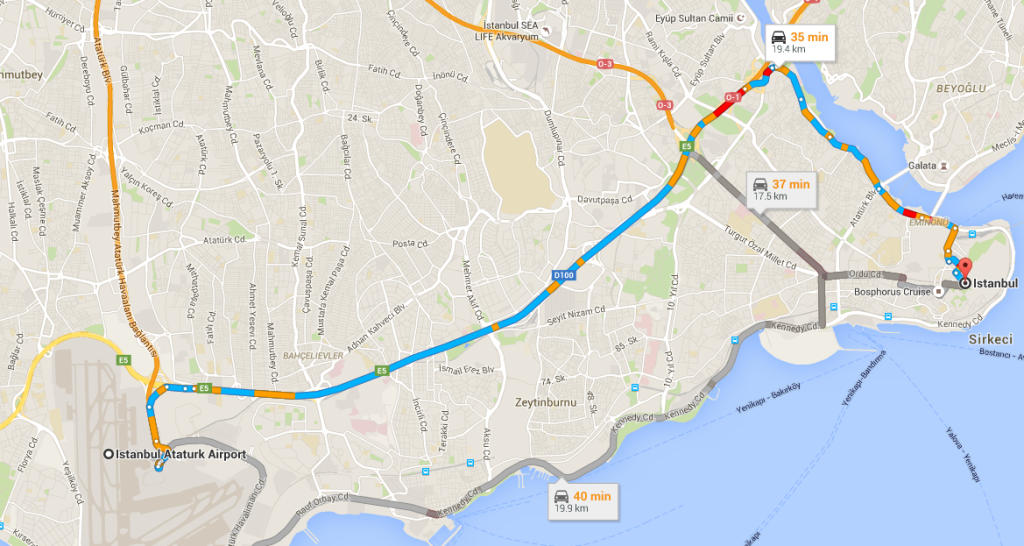 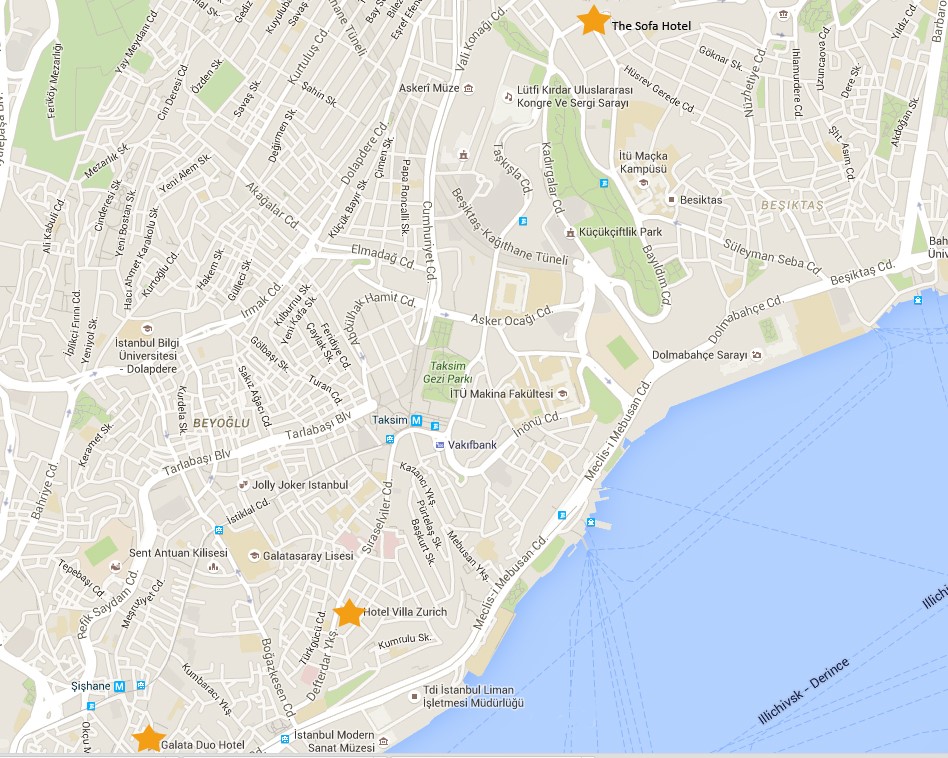 Duo Galata Hotel – Fresh, funky and bursting with character, the Duo Galata Hotel is an unexpected gem in the budget price range. With a contemporary graffiti décor and fabulous city views, the hotel’s position in the heart of the trendy inner city Beyoğlu District puts you within walking distance of many of the iconic attractions.

Hotel Villa Zurich – The effortless European elegance of the Hotel Villa Zurich is a perfect complement to its fabulous location, just 500 metres from Taksim Square. You can start the day with a buffet breakfast on the spectacular roof terrace overlooking the Bosphorous, then return from your sightseeing to enjoy a drink in the 1960s inspired lobby bar.

The Sofa Hotel Istanbul – Explore Istanbul from the lap of luxury with a stay in the Sofa Hotel Istanbul, located in the city’s fashionable Nisantasi district. With 24-hour service, late checkout, a full range of onsite spa treatments, spacious contemporary rooms, and fabulous views over the city, it feels more like a stay in a luxury home than a hotel.