Greece has long captured the imaginations of travellers keen to immerse themselves in unique culture and history, and Rhodes stands out as one of the country’s prime attractions. The landmass is the largest of the Dodecanese Islands, and the archipelago’s historical capital. In centuries past, it housed the internationally famous Colossus – one of the Seven Wonders of the World. Today, visitors can explore a wide range of archaeological sites, experiencing history going back more than two millennia.

What’s more, where you might need to pay expensive city rates to surround yourself with this much culture elsewhere, Rhodes is blessed with a number of small, affordable villages that welcome tourists. Chief among them is Kiotari, a small town blessed with beautiful clean beaches and crystal clear waters. Businesses have flocked to Kiotari in recent years, building a range of great restaurants and hotels without compromising the area’s village charm. Best of all, there’s a staggering number of amazing cultural experiences all within a half-hour’s drive! Read on for some of the best … 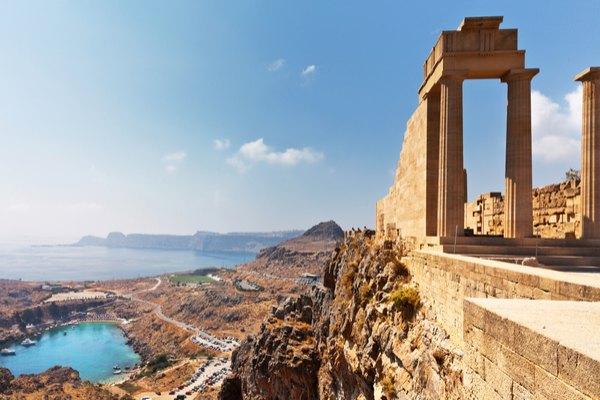 The Acropolis of Lindos

How far is it? A 22-minute drive from Kiotari.

Lindos is perhaps one of the most fascinating sites in all of Greece, with excavations discovering more ancient ruins seemingly every day. The entire area is covered with monuments, including a theatre, cemeteries and grand tombs. But what makes it so special is the varied history that’s on show. Orthodox churches sit next to Muslim graveyards and pre-Christian ruins in a diverse architectural mix.

At the centre of it all is the Acropolis itself. Likely constructed atop an older temple, Kleoboulos, the so-called ‘tyrant of Lindos’, built the Acropolis as a monument to the mysterious cult of Athenia Lindia. Make sure to take your time on this trip, as there’s a lot to take in.

How far is it? Only eight minutes from Kiotari by car.

Kiotari’s popularity as a beach location has had some understandably mixed effects on the local area, but it has certainly been good for Rhodes. One of the rarely noticed positive side-effects has been that other nearby towns have remained basically unspoilt.

Asklipio is one such town, not falling victim to major development projects in centuries.

Although it’s worth making the short journey to Asklipio just to drink in its virgin beauty, the village’s biggest attraction is its medieval stone fort. Built atop its highest hill to give occupiers a commanding view of the terrain, the fort is a palpable reminder of the strategic concerns of visitors past. It also makes for a striking view. 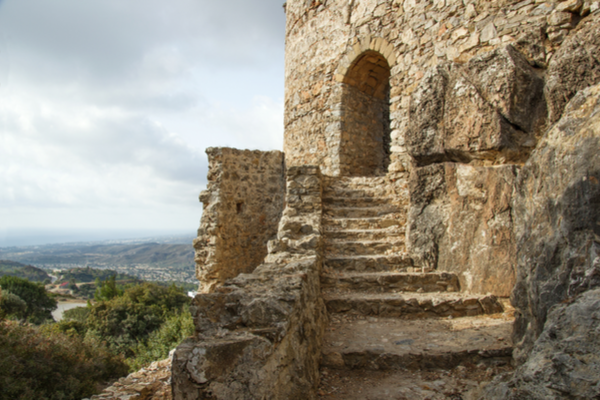 How far is it? Thirteen minutes’ drive from Kiotari.

Another ancient fort built for much the same reasons as the one at Asklipio, the castle at Lardos is even bigger and more impressive. It also has a more complicated and interesting history. Initially constructed by Byzantine occupiers around the twelfth century, the site was occupied by Knights of the Order of St John after their arrival circa 1309. They made some of their own adaptations, altering the fortress to better suit their needs, and today it’s a good example of the wonderful architectural diversity found all across the Aegean Sea.

How far is it? Around a half-hour by car from Kiotari.

Last but not least, we come to Monolithos Castle. Although only some parts of the building’s exterior remain, it’s still well worth the trip from Kiotari. Built 236m above sea level on some of the roughest terrain in the region, its construction was an archaeological masterpiece. Get ready for a walk, as cars can only go so far: visitors have to make the trek all the way to the top of the hill under their own steam. Once you reach the summit, though, you’re rewarded with a stunning view of the Mediterranean. I’m sure the workers who hauled the stone up to build the fortress loved their jobs … 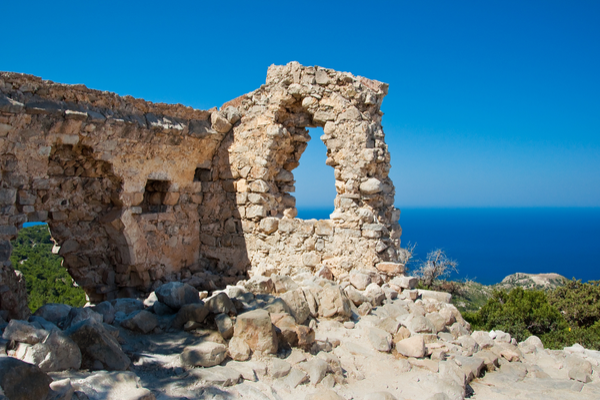 How to Get to Kiotari

The closest airport to Kiotari is Rhodes International Airport (RHO) and it’s well serviced with flights from the UK. Eight airlines fly the route regularly from London, making several journeys a week, and this healthy competition helps keep flights affordable. The trip takes around four hours.

Once you land, don’t take your chances with local transport options – not least because Kiotari is small enough to be pretty much outside most major transport links. Instead, pre-book a Shuttle Direct transfer and take the hour-long journey straight to your hotel door with no fuss and no hassle.

Lindos Imperial Resort & Spa: Just two minutes’ walk from Kiotari Beach, the Imperial is one of the up-and-coming resort town’s most luxurious options. Free wifi and LCD satellite television come as standard, of course, and all rooms are air-conditioned and well-decorated, including marble bathrooms. The Imperial also boasts a vast array of top-quality amenities, including three outdoor pools and one indoor pool, a spa, a sauna and hot tub, and a variety of sports facilities. It’s the perfect place to come back to after a long day exploring ruins!

Pasalis Apartments: If you want accommodation that’s a little quieter to enjoy Kiotari’s village atmosphere, look no further than the Pasalis Apartments. Situated just 100 yards away from the beach, the Pasalis is ranked the best value in the town for good reason. Its rooms all offer free wifi and bathrooms with showers, as well as fully-stocked kitchens, including a kettle and even a coffee machine.

Shuttle Direct is the highest ranked and most trusted airport transport operator in all of Europe and North Africa. It earns its reputation for its intuitive booking system and experienced, friendly drivers, who are always willing to engage you in a conversation about your destination while getting you there in style and comfort.