Located on the coast of central Italy overlooking the Tyrrhenian Sea, the seaside resort of Gaeta has long been a popular holiday destination for Italian families. Its small harbour attracts relatively few cruise ships compared with the better-known ports of Civitavecchia (Rome) to the north and Naples to the south. Passengers whose itinerary does include Gaeta, however, are in for a treat as this former Roman fortress town is a real hidden gem of the European cruise circuit.

During a day in port most visitors like to spend their time wandering the cobbled streets of the medieval old town with coffee breaks at any number of open-air cafés. If you want more than historic sightseeing then you can head for the large urban park of Monte Orlando then take a dip in the sea off the adjoining Serapo Beach before enjoying a seafood lunch at one of the local beachside restaurants. A number of shore excursions are usually made available to see nearby attractions such as the Roman city of Minturno, the Sperlonga Sculptures or the Abbey of Montecassino.

Cruise ships dock right in the centre of town near to Piazzale Cabote which lies just a few metres from Il Molo Gelateria (Piazza del Pesce, 1). After enjoying one of the best ice creams in town passengers are ideally located to discover the old town on foot. Local taxis are available to get to Serapo Beach or the Sanctuary of Montagna Spaccata which both lie approximately 2km away.

Passengers who are heading for Gaeta to meet a cruise ship or are ending their journey at the port have the option of travelling through several international airports. The closest is Naples (93km) followed by Rome Fiumicino (150km) and Rome Ciampino (162km). There are bus and train services for travelling to Gaeta from Naples or Rome but they aren’t convenient options for cruise ship passengers travelling with luggage. The best way to travel from Naples Airport to Gaeta is by means of a private transfer. Shuttledirect offer pre-booked airport transfers from Naples, Rome Fiumicino and Rome Ciampino. 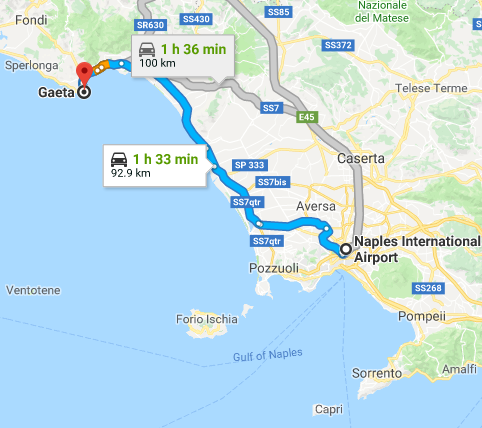 In the shadow of the imposing Angevine-Aragonese Castle which dominates the medieval centre of Gaeta lies a charming old town. This Centro Storico is home to a number of architectural attractions which are well worth a visit during a day in port. The highlight of these is the Cathedral of St Erasmus which is best known for its impressive bell tower, art collection and crypt. Other religious sights include the 7th century Church of Saint Lucia which is the oldest in Gaeta and the Sanctuary of the Santissima Annunziata which is notable for its Golden Chapel.

Insider Tip: For a cheap and tasty takeaway lunch in the old town you needn’t look further than Pizzeria del Porto (Via Bausan, 40). This place is well-known for its pie-like pizzas called ‘Tielle di Gaeta’ which are a local speciality. For more formal dining, close to where the ship docks, La Salute (Piazza Giovanni Caboto) is highly recommended for excellent seafood dishes. 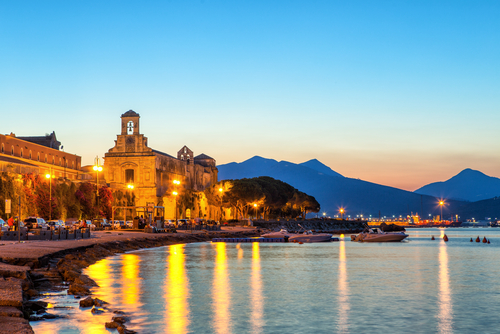 The southern part of the Gaeta Peninsula is made up of a large urban park called Parco Monte Orlando. Overlooking the Gulf of Gaeta this former NATO naval base is popular with local hikers and cyclists. The main historical attraction within the park is the Mausoleum of Munatius Plancus which was built in 22 BC to bury one of Caesar’s generals. Nature lovers should allow time to visit the natural sea grotto of Montagna Spaccata. Legend has it that this rock formation was created by an earthquake which occurred when Jesus died on the cross.

Just west of this ‘Split Mountain’ is Serapo Beach which is the most popular of seven local beaches which attract large numbers of Italian holidaymakers during the summer months. A lovely place for lunch overlooking the beach is Ristorante del Lido La Perla (Via Marina di Serapo) which serves a selection of delicious seafood and pasta dishes.

The majority of cruise ship passengers visiting Gaeta for the first time are more than happy to wander around the local sights rather than heading out on a shore excursion. However, short trips to nearby attractions are usually made available for passengers who want to see a little more of the Lazio region.

Just 23km east of Gaeta is the Archaeological Site of Minturno which is the site of a Roman city dating back to 296 BC. Visitors can wander around the remains of the ancient theatre, forum and numerous temples as well as marvel at a beautifully preserved section of the Appian Way. 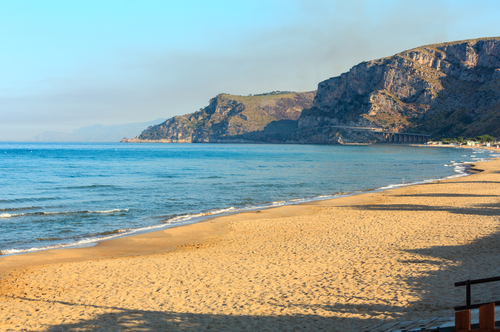 Alternatively, you can head west along the coast from Gaeta until you reach the cliff-top town of Sperlonga which is home to the Sperlonga Sculptures. These were discovered here in the grounds of a Roman villa which used to belong to the Emperor Tiberius and are now on display locally in the impressive National Archaeological Museum.

A little further afield is the Abbey of Montecassino which lies 53km north-east of Gaeta. Formerly a Roman fortification, this historical destination was established as a Benedictine monastery around 529. Whilst it has been destroyed and rebuilt numerous times over the centuries it now stands in all its splendour and is widely considered to be on of Europe’s most beautiful monasteries.