Keen golfers who enjoy playing a round or two against a stunning Mediterranean backdrop will already be familiar with the resort of Belek. But while it is true that this purpose-built resort in south-east Turkey has access to more than its fair share of championship-level golf courses, don’t let those sporty types keep this idyllic spot all to themselves. There is a wonderful variety of sights for culture vultures to enjoy in the local area too, especially for those who want to take advantage of the comfort and facilities of Belek’s many four and five-star hotels.

The History of Belek

The modern-day resort can only trace its history back to the 1980s, when it was built to serve the lavish hotels which were springing up along this beautiful stretch of Turkish coastline. But the area surrounding the town has a deep and rich Hellenistic, Roman and Byzantine history which is evident in the many nearby ruins and archaeological sites. From Antalya – which is just a short drive down the coast – to the historic ruins at Perge, this region has a fascinating history ripe for discovery by those who enjoy cultural exploration. 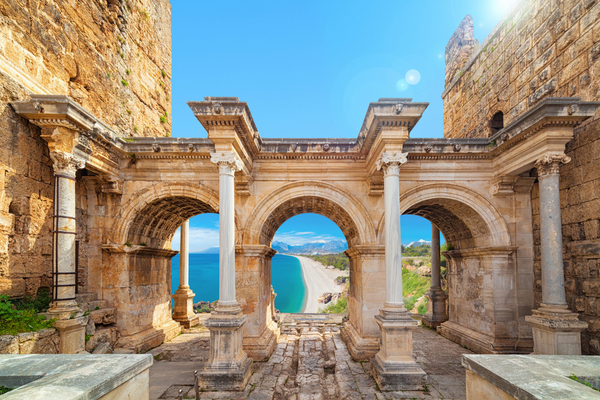 A Cultural Treasure Trove of Antiquity

The Mediterranean coast of Turkey has more than its fair share of fascinating ancient ruins. If you wanted to you could fill your holiday with a different site every day: here are just three of my favourites to whet your appetite and start you off on your cultural adventure.

Feel History Come Alive at the Theatre of Aspendos

Set in the countryside behind Belek is Aspendos, a town with a history stretching back as far as 1000 BC and a major trading post for salt, wool and oil from the fifth century BC onwards. The ruins of the town are fascinating, but none are quite as breathtaking as the stunning amphitheatre of Aspendos. Described as the best-preserved Roman theatre outside of Italy, the amphitheatre brings to life the history of the people who would have gathered here during the town’s ancient past. Built in 155 AD as a gift to the Roman emperor and the gods, it stands at an impressive 315ft tall.

It is still used for performances today, so I would recommend trying to coincide your visit with one of its famous annual festivals, such as the International Opera and Ballet Festival. 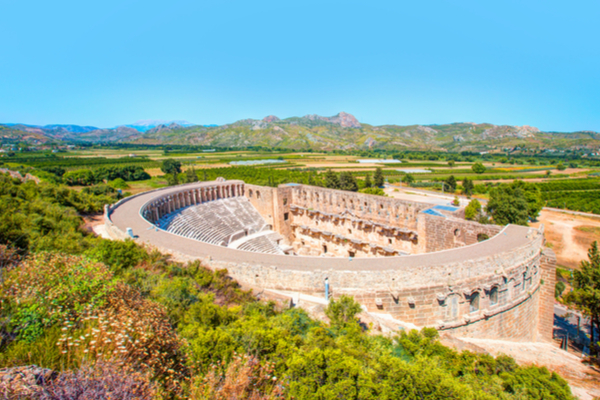 Amazingly the stunning Triumphal Arch, known as Hadrian’s Gate, in Antalya was hidden for hundreds of years beneath the Seljuk city walls and was only discovered in the 1950s. Since then the local authorities have worked hard to restore and protect the arch, excavating the original Roman pavements that ran beneath it. It is now covered by Perspex to protect the ancient walkway, and visitors can walk beneath the arch to enter the old part of the city, just as they would have done in ancient times.

Hadrian’s Gate was built in around 130 AD to honour the emperor Hadrian who visited the city at that time. Three arches are supported by four splendid Corinthian columns. Despite the age of the arch, only one of the towers either side of it date from the Roman period; the other a later thirteenth-century addition.

Step Back in Time to the Hellenistic Period in Perge

This is probably one of the best Roman ruins I’ve visited. The city of Perge was an important port during the Hellenistic period thanks to the River Kestros, although the river has long since silted up. There are still some Greek ruins to be seen in the town (most notably the impressive Hellenistic Gate with its ancient towers) but the Romans were also big players here and developed Perge into an impressive Anatolian city.

The University of Istanbul has been excavating the site since the 1940s and they’ve done a wonderful job. Today as you walk around you can clearly make out the city as it would have been – including its marble main street, lined by grand colonnades. Visitors can see the massive 12,000-capacity theatre, the acropolis, the 34m² commercial centre, the baths, gates and even the gymnasium. It is well worth planning to spend a day here to really appreciate the site. 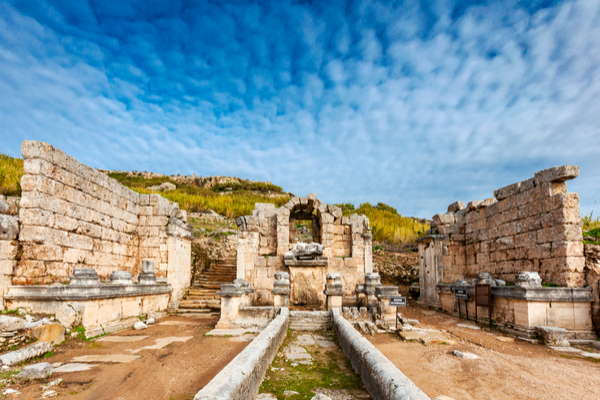 With so much to see and discover in the local area it is hard to imagine tiring of exploring the wonderful country around the resort, but if you do find yourself wanting to take a day off from historic adventuring, there’s also plenty on offer for resting tourists. From excellent luxury hotels to beautiful Mediterranean Blue Flag beaches, the lure of rest and relaxation in this idyllic location is hard to resist. And if you do find yourself succumbing to its charms, then why not go the whole way and check out some of the world-class spas offered by the five-star hotels.

How to Get to Belek

The closest airport to Belek, at just 19km away, is Antalya Airport (AYT) from which airport transfers take a blissfully short 30 minutes. Flights to Antalya are run by a range of airlines including easyJet, Thomas Cook and Jet2. I would definitely recommend booking your airport transfer in advance with Shuttle Direct online to avoid any difficulty arranging a taxi at the airport when you land. 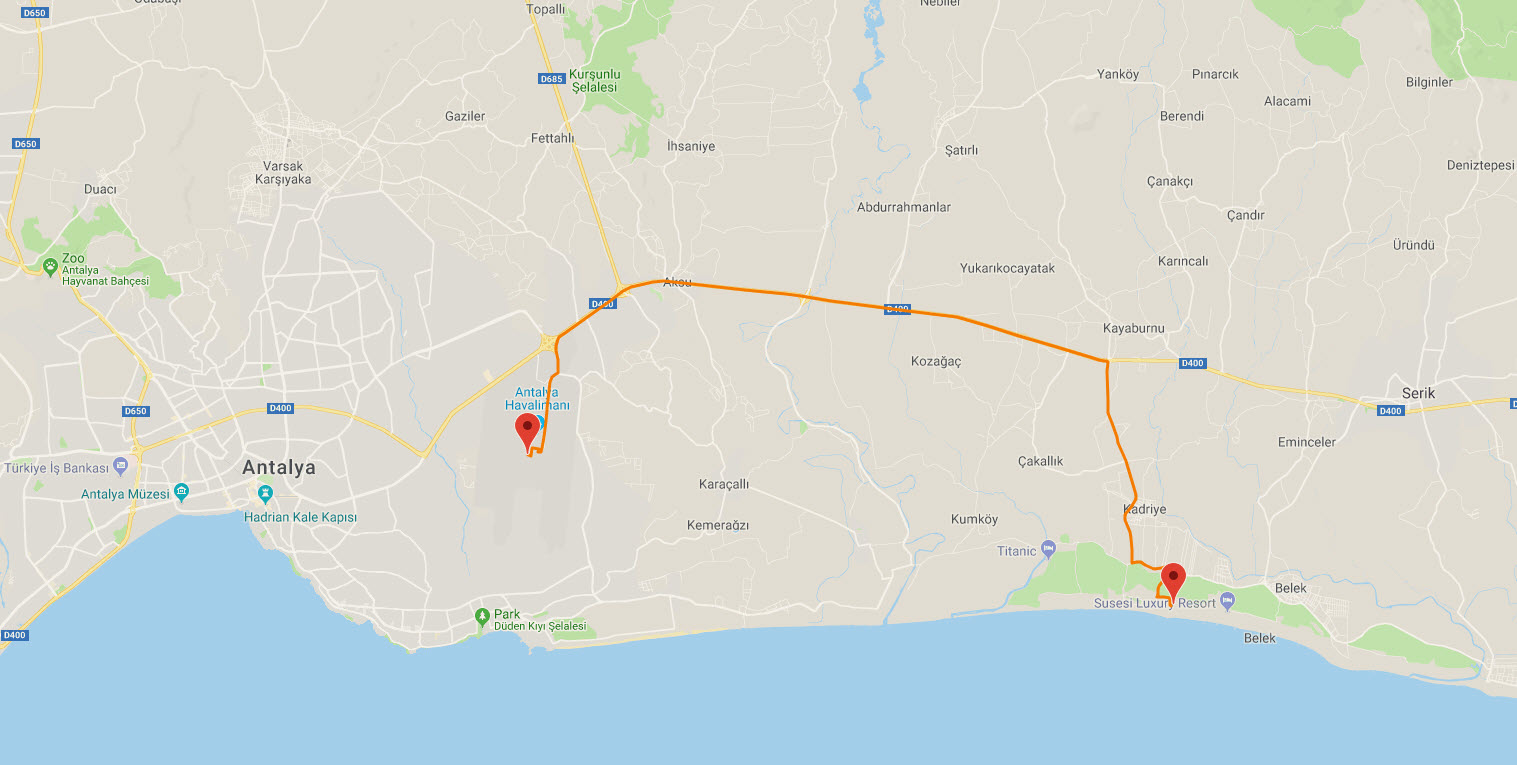 Shuttle Direct is Europe and North Africa’s leading airport transfer provider offering a range of travel options, from a shared bus to a premium private transfer. Book with Shuttle Direct and a driver will meet you in the arrivals lounge to whisk you off to your accommodation.