Paris is a haven for anyone interested in culture, art and history, and is a fabulous destination for anyone who, like me, enjoys indulging their love of religious history in particular. Stunning buildings, internationally famous museums, a gastronomy that rivals no other, and of course the magnificent historical sites make Paris a unique and rather special place.

If you’d like to experience the delights of Paris without spending a penny, these attractions are completely free!

Playing an influential role in all aspects of Europe’s past, Paris certainly made its mark on Roman, Christian and Jewish history. You only have to look at the cathedrals, religious monuments and other objects of interest that stand here today to realise what an important place, religiously speaking, Paris once was, and indeed still is. 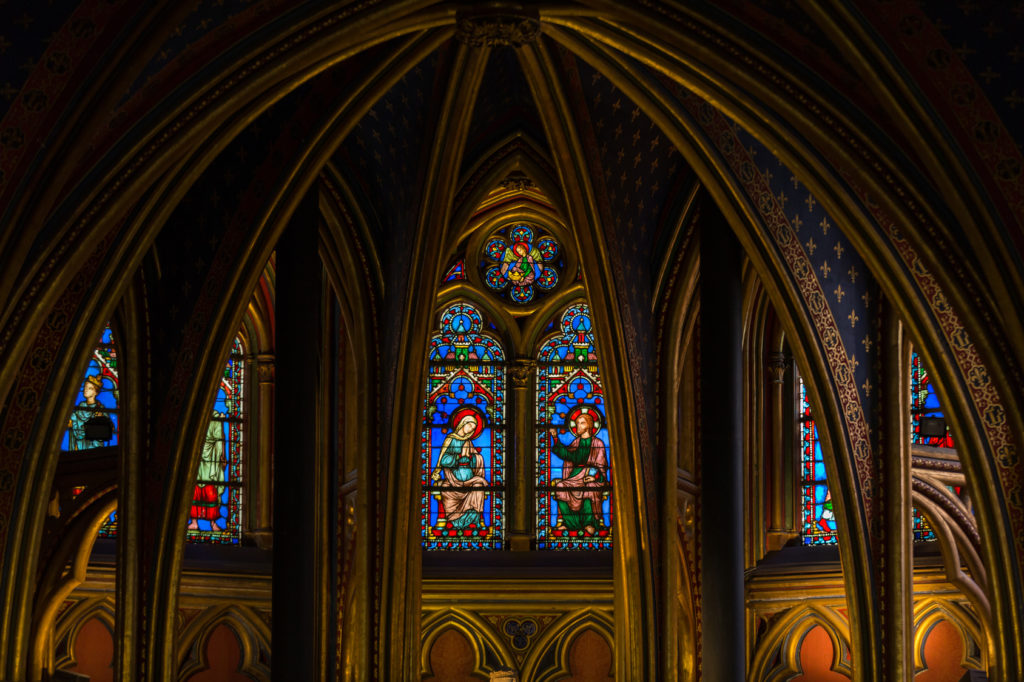 This 13th century Gothic chapel on the Île de la Cité was once the royal chapel of devout King Louis IX, who founded the place and used it as a home for his precious relics, such as the crown of thorns from the emporer at Constantinople. He purchased the relics himself and many were worth more than chapel itself. Only the chapel stands on this site today.

When the King had the chapel built, he had aspirations to become the central monarch of the Christian world. On his death, he was canonised by the Pope and is now a saint. The French Revolution saw the destruction of many of the precious relics, but those that remain are housed in the treasury of Notre-Dame Cathedral. Visit today and you witness the 19th century restoration of the chapel that has sensitively accounted for the Gothic features and fragile aesthetics of the interior. The stain glass windows are particularly stunning. 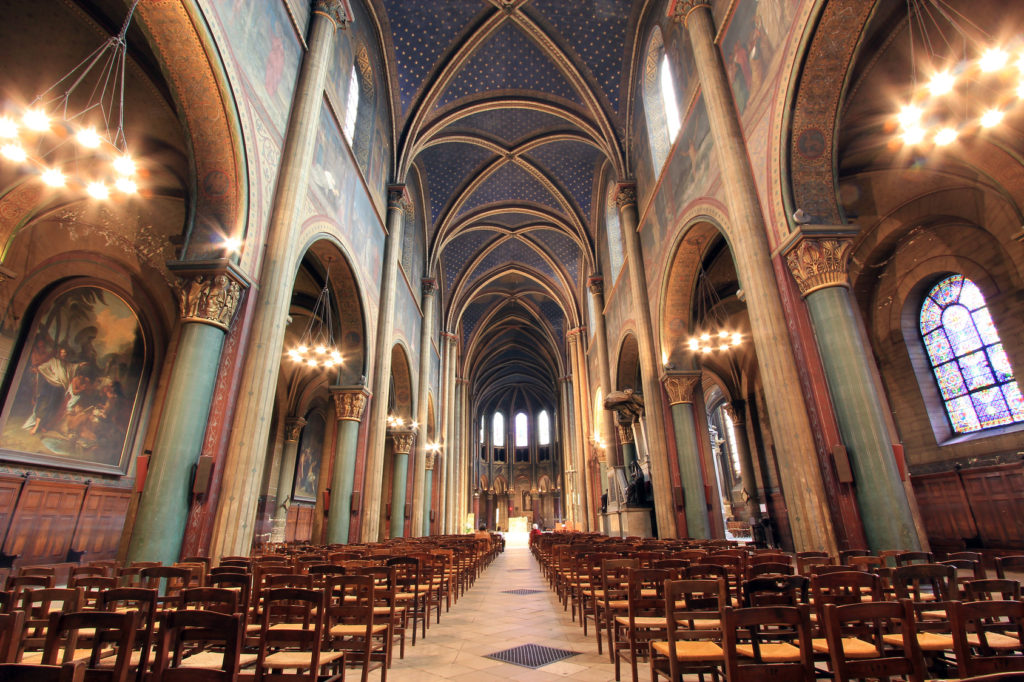 The oldest church in Paris, St-Germain-des-Prés dates back to the 6th century. At this time a Benedictine abbey was established on the site by Childebert, the son of Clovis, to house a relic of the True Cross, which was brought to France in AD 542. Historically, the church held much power and was almost a town in its own right until the Normans destroyed it. Today, the marble columns in the triforium are original, but the carved capitals are copies, as the originals are housed in the Musée National du Moyen-Age.

Thankfully the church escaped damage during the French Revolution, and today there is much to see. 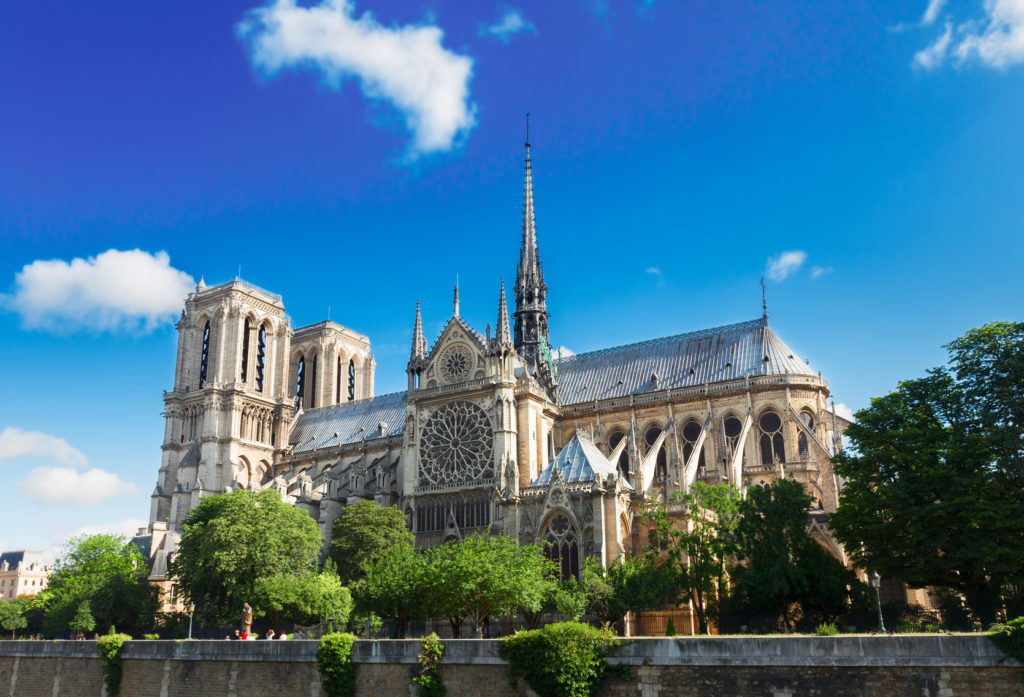 You can’t visit Paris and not take a trip to the beautiful Notre Dame cathedral. Famous for its stained glass, sculptures, and architectural features, the cathedral is a fine example of French Gothic style.

For good reason, this cathedral is the most popular monument in the country, but it is also a place of pilgrimage and active worship, as well as an important site for Catholic events in France. The cathedral you see today was founded in 1163 and construction was completed in phases under the instruction of several architects. Another victim of the Revolution, the cathedral lost many of its treasures in the 18th century, but was later restored.

For more information on the French Revolution, follow this link. 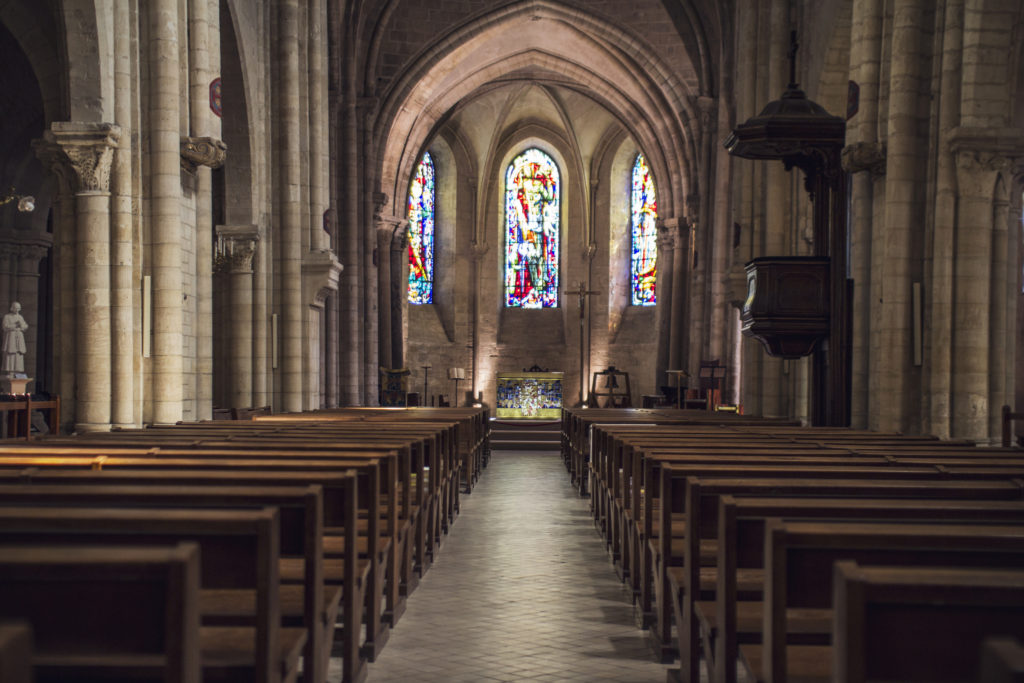 Eglise St Pierre de Montmartre by Jackie.lck is licensed under CC BY 2.0

Another ancient church in the city, this one was built in 1147, on the site of a Roman temple dedicated to Mars. Originally built in the 7th century by the Merovingians, the church was once part of a Benedictine nunnery founded by the mother of King Louis VII. The nunnery was moved and then destroyed during the French revolution.

The St Pierre-de-Montmartre you see today has been subjected to alterations but still remains an important religious site in the city and is a personal favourite of mine. 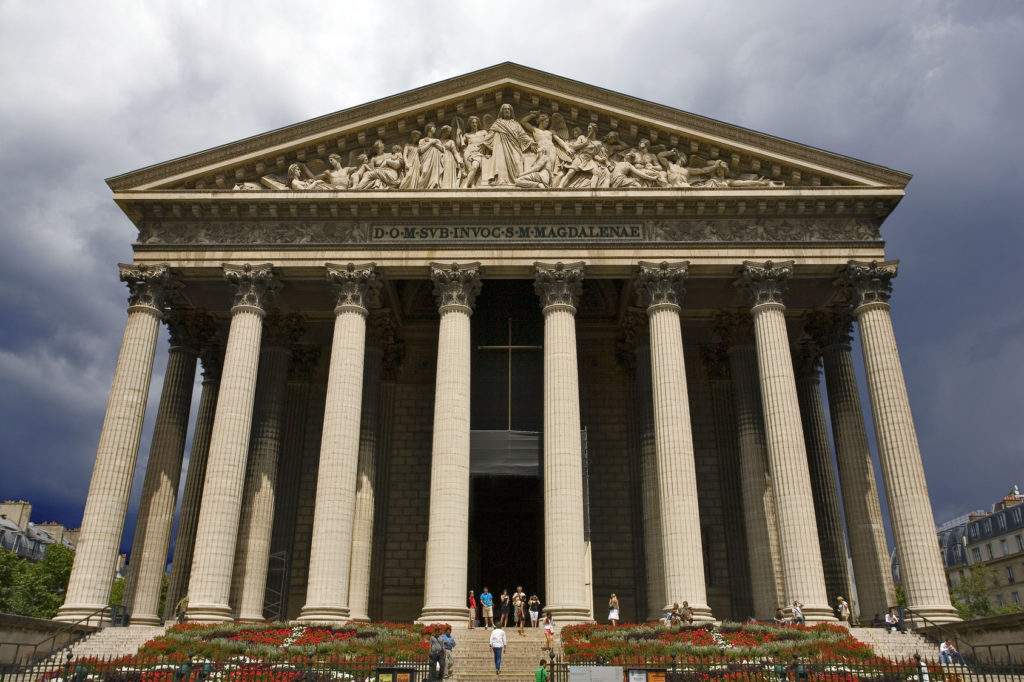 Dedicated to St Mary Magdalene, this church was built as a temple to commemorate the glory of Napoleon’s army. After a rocky start to construction, with the death of the first architect and the slowing of progress during the French Revolution, the church was under constant scrutiny. Debate over its fate in Revolutionary France raged, until Napoleon decided it was to be begun again and built as the Temple de la Gloire de la Grande Armée. After the reign of Napoleon, King Louis XVII decided it was to be a church and his ambition was realised in 1842.

The neo-classical style with which the church was built was inspired by the Maison Carrée at Nimes, reputedly one of the most well preserved Roman temples in the world.

Hosting daily masses, concerts, and even weddings, the church is today one of Paris’s most popular ones. 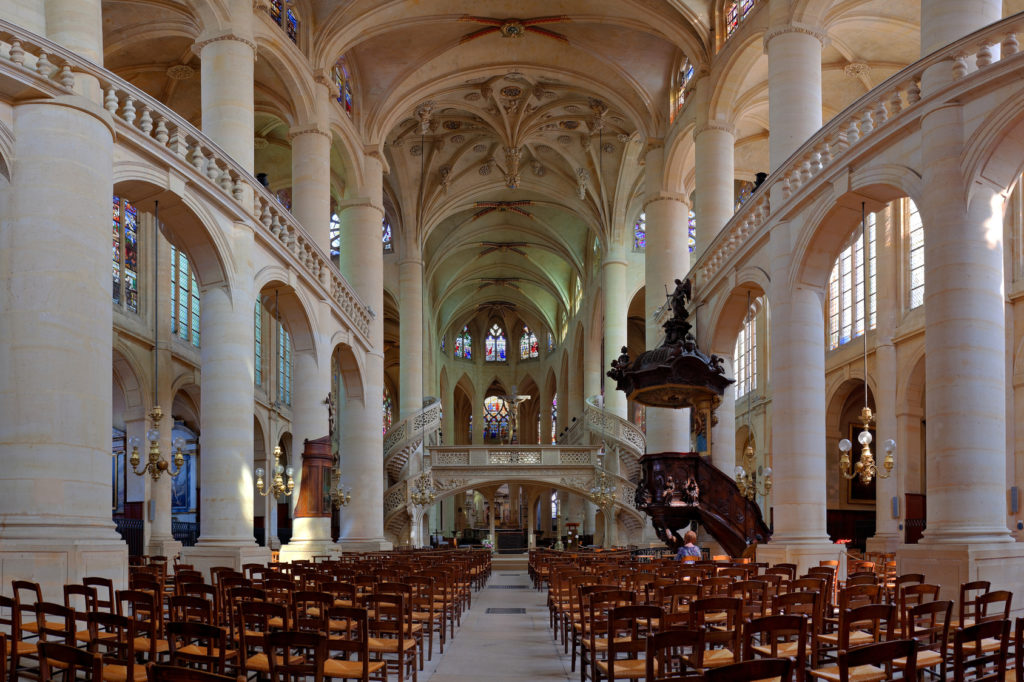 I love this beautiful Gothic church with its unique aesthetics and interesting history. Built between 1492 and 1626, the church was once part of the abbey dedicated to the much loved patroness of Paris, St Geneviève.

The Tower of Clovis is the only visible remnant of the abbey, but the church is still very evident. With its Gothic style (which is unusual for the time it was built), the church houses the tombs of many influential characters, and is also noted for its unique 16th century rood screen, which crosses the nave and has spiral staircases on each side. 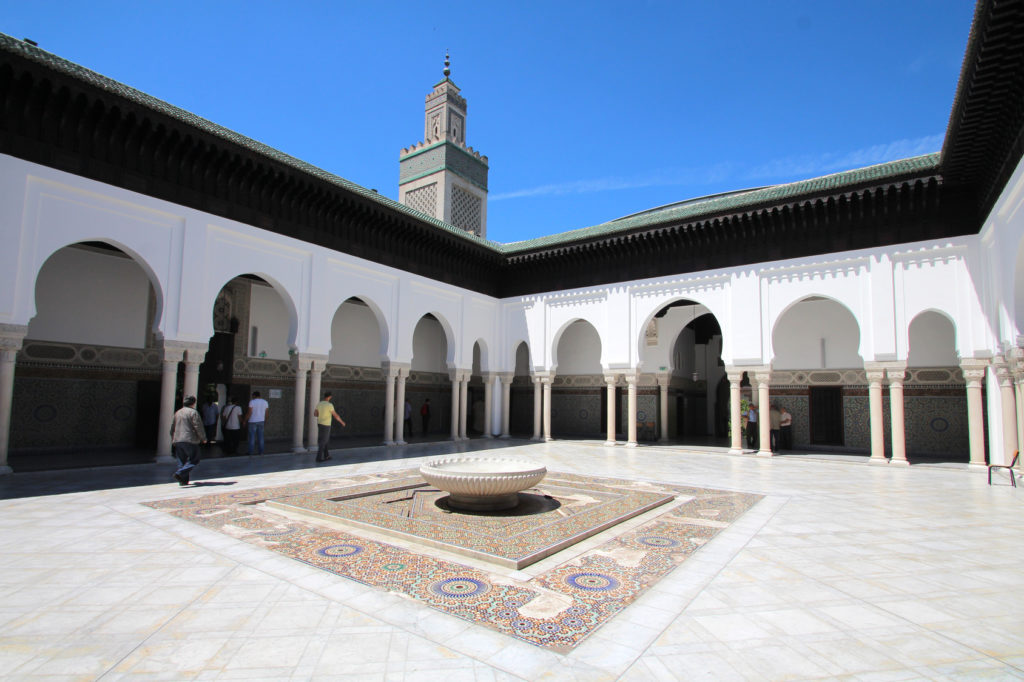 In complete contrast to all I have described above, this modern building, representative of the religiously embracing nature of Paris, is a stunning example of Muslim architecture. Built in 1922 as a homage to the countries in North Africa that contributed to the war effort on the part of France during the First World War, the mosque was renovated in 1992.

Beautiful mosaics and wood carvings evoke images of Moroccan architecture and, if you visit this building on a Friday, you will see the numerous peoples with North African roots who still worship here today. You can take a tour accompanied by a guide or just visit and wander at will. 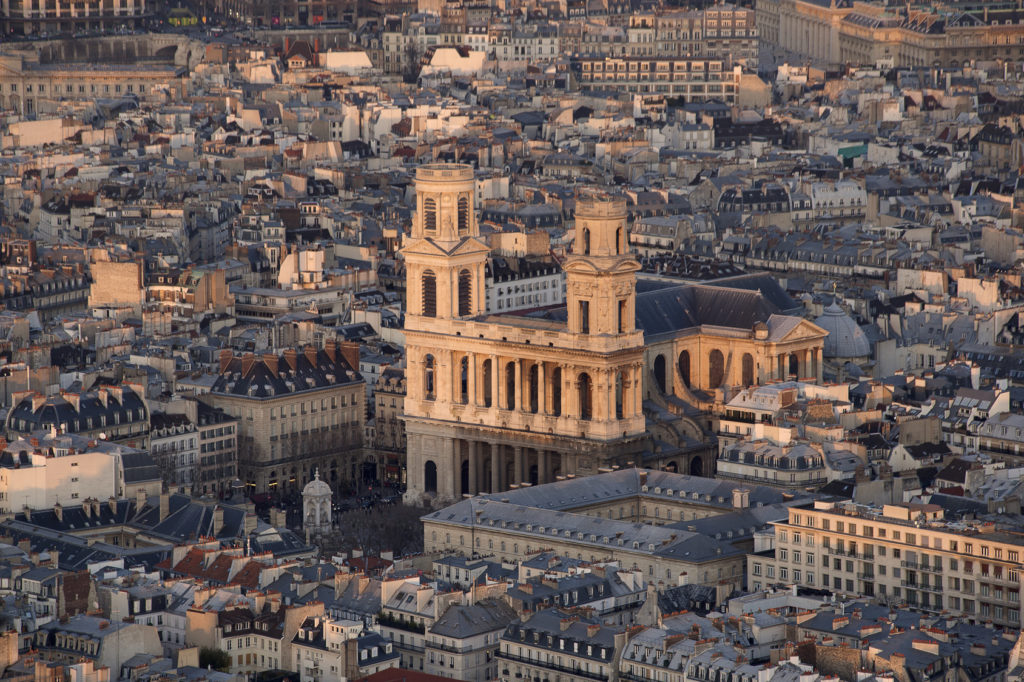 Grand, elegant and rather fitting for its location in the trendy area of Saint-Sulpice, this Baroque church is most well known for featuring in The Da Vinci Code. Founded by the Society of St-Sulpice, this large building took over 100 hundred years to build (beginning in 1646) and was influenced by several architects.

Very much frequented by the rich and influential, St-Sulpice hosted the christenings of Marquis de Sade and Charles Baudelaire, as well as the wedding of Victor Hugo. Partly destroyed during the Revolution, the church was then morphed into a Temple of Victory and renovated in the 19th century by Eugene Delacroix, whose frescos are one of the main highlights.

How To Get to Paris

There are two main airports in Paris, Paris Charles de Gaulle and Paris Orly. Both are busy hubs that offer connecting flights to and from the UK. British Airways fly into the two Paris airports and offer some great deals on the 1 hour 15 minute flight. You can buy a return ticket from London Heathrow to Paris Charles de Gaulle for around £90. Other airlines include easyJet, Air France and Vueling Airlines, but I like British Airways as when you elect to include hold baggage you get a 23kg allowance, which is much bigger than some of the other airline allowances.

Getting from either airport into the city couldn’t be easier with Shuttle Direct, and if you enjoy seamless comfort when you travel (as I do), you couldn’t be in better hands. They provide an excellent service that begins with a personal meeting on arrival and continues with a comfortable journey to your accommodation. A private vehicle for the 45 minute transfer from Charles de Gaulle into the city will cost you approximately £25 per person, based on two sharing, and can be conveniently booked in advance so you have nothing to worry about on arrival, other than where you are going to head to for your first croissant!

Wherever your final destination, let Shuttle Direct help you get there. We take great pride in specialising in fast, efficient, and comfortable pre-booked transportation between airports, train stations, cruise ports, hotels, and more. Why not get your holiday off to a great start and leave your transport logistics in the capable hands of Shuttle Direct.