The origins of Helsinki, the capital of Finland, can be traced as far back as 155o when it was founded by King Gustav I of Sweden as a trading port on the Baltic Sea. It stands on the tip of a peninsula surrounded by hundreds of small islands. Throughout history its location on the Baltic with shipping routes to Russia, Sweden and Estonia has been a key factor in its economic development. Today Helsinki is a busy port not only for ferry passengers travelling around the Baltic region but also for the 300 or so cruise ships that stop here annually.

The vast majority of cruise passengers who arrive in the city will dock at the South Harbour or the West Harbour. The South Harbour is most convenient as it is located in the city centre within walking distance of Helsinki’s main attractions. The West Harbour is more suitable for larger vessels and is located some 15 minutes from the city by road. Most cruise lines provide transport into the city, otherwise you can jump into a taxi or use the local tram system. 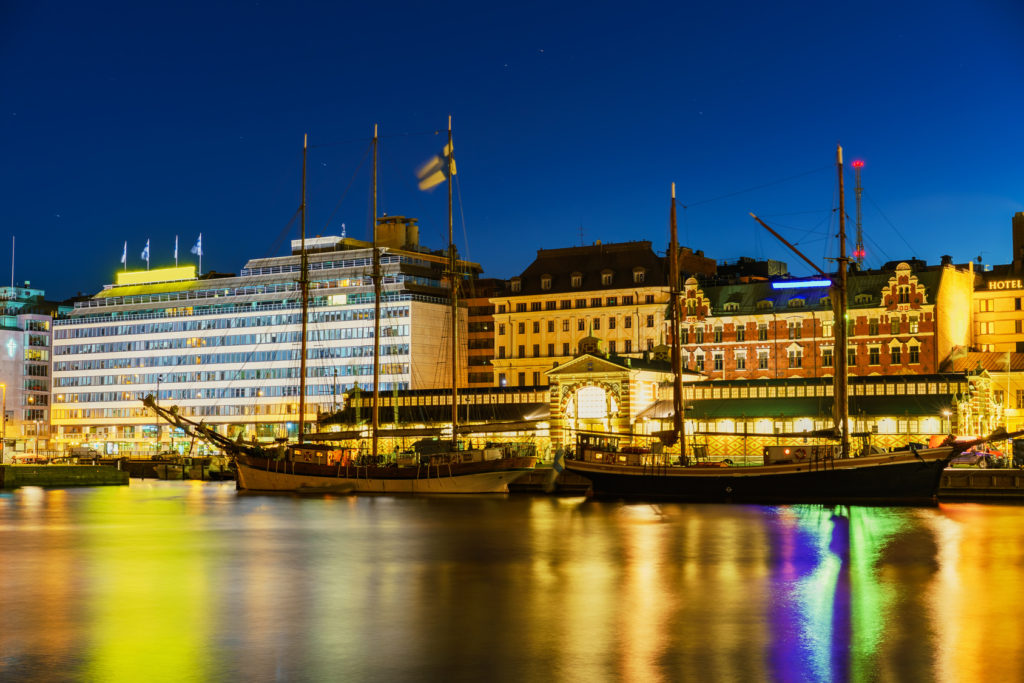 If you’re joining or leaving a cruise ship in Helsinki you’ll be travelling through the city’s international airport which lies 17km (11 miles) north of the city in Vantaa. With over 16 million annual passengers the airport is one of the busiest in Scandinavia serving as a hub for the national airline, Finnair. Transport to or from the airport is available with specialist transfer operator Shuttledirect. There’s also a Finnair City Bus service and a train connection between the city centre and the airport.

Insider Tip: It may be worth packing sleep masks as you can expect 19 hours of daylight when visiting Helsinki during the summer months.

At first sight you might find something vaguely familiar about Helsinki, especially if you’re fond of classic Cold War movies such as Gorky Park. Film crews were rarely able to visit Moscow during this period so Helsinki and Stockholm often served as alternatives thanks to similarities in their architecture. As a matter of fact Finland only gained independence from Russia in 1917 after the Bolshevik Revolution.

Senate Square: Several of Helsinki’s main attractions lie on the centrally located Senate Square which was designed in neo-classical style by the German architect Carl Ludvig Engel in the early 19th century. These include the Cathedral, the Government Palace, the National Library and the University.

Insider Tip: The Euro is the currency of Finland. You’ll find plenty ATMs located outside banks all over the city

Helsinki Cathedral (Unioninkatu 29): Helsinki’s Lutheran Cathedral on the Senate Square was completed in 1852 and is the city’s most iconic building. Another religious building worth visiting is the Uspenski Orthodox Cathedral (Kanavakatul 1) which is Europe’s largest Orthodox Church and a clear symbol of the influence of Russia on Finnish history. The Rock Church (Lutherinkatu 3) is also a popular religious building which has been carved out of bedrock. 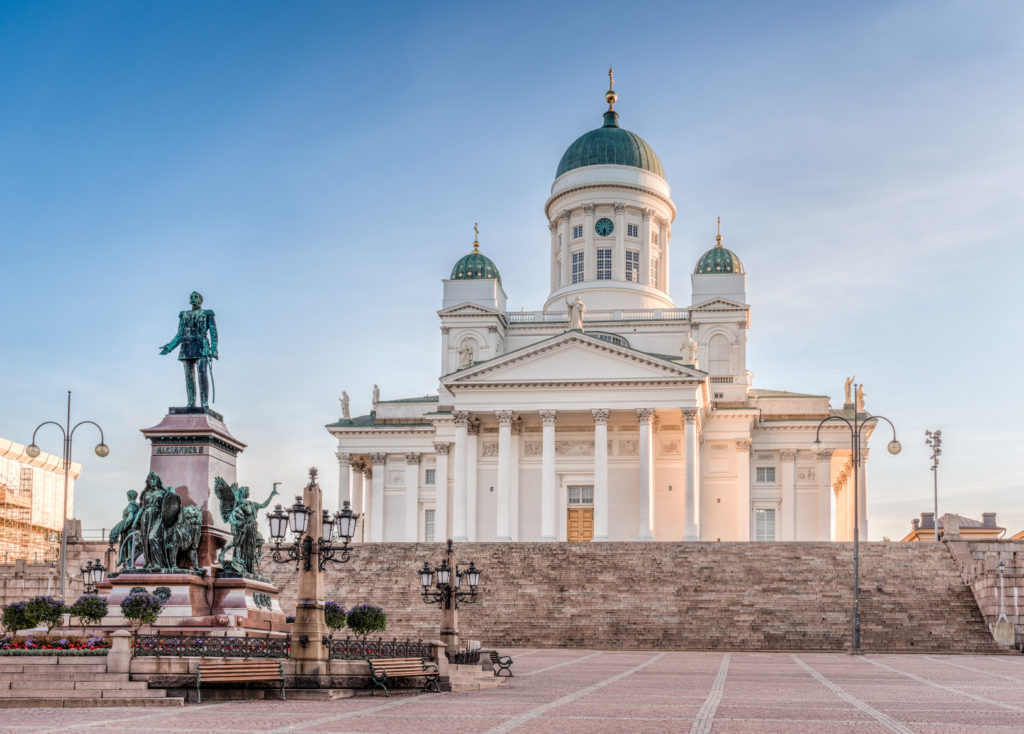 Esplanade Park: An oasis of tranquility in the city centre where you can take a break and watch the world go by in the company of fellow-minded locals. Once refreshed, head for the Market Square (Eteläsatama) which is home to the city’s most famous market where you can browse the stalls in search of traditional souvenirs.

Insider Tip: The indoor hall at Market Square is a good choice for a simple lunch on the go or for a well-earned coffee break.

Ateneum Art Museum (Kaivokatu 2): Dating back to 1887, this is Finland’s largest art museum with over 20,000 exhibits. It is a must-see attraction for art enthusiasts visiting the city. The Museum of Contemporary Art Kiasma (Mannerheiminaukio 2) is Helsinki’s other main art gallery.

Olympic Stadium ( Paavo Nurmen tie 1): Sports fans may be interested in visiting the Olympic Stadium which hosted the 1952 Summer Olympic Games. It has since hosted World Athletics Championships and is home to the national football team. The stadium lies just outside the city centre but is undergoing renovations until 2019 so the official stadium tours have been suspended.

Insider Tip: If you’re interested in doing some shopping whilst in Helsinki head for the Esplanade in the city centre where you’ll find some of Finland’s finest stores. The top department store in town is Stockmann (Aleksanterinkatu 52) where you can pick up interesting craft items from Lapland, the home of Father Christmas!

Suomenlinna Sea Fortress: Just a short ferry ride from the Helsinki waterfront, this UNESCO World Heritage site spans six islands making it one of the world’s largest sea fortresses. The structure dates back to 1748 and is one of Finland’s top attractions so it’s well worth including it in your planned itinerary. Time your visit correctly and you can enjoy lunch at one of its fine cafés. 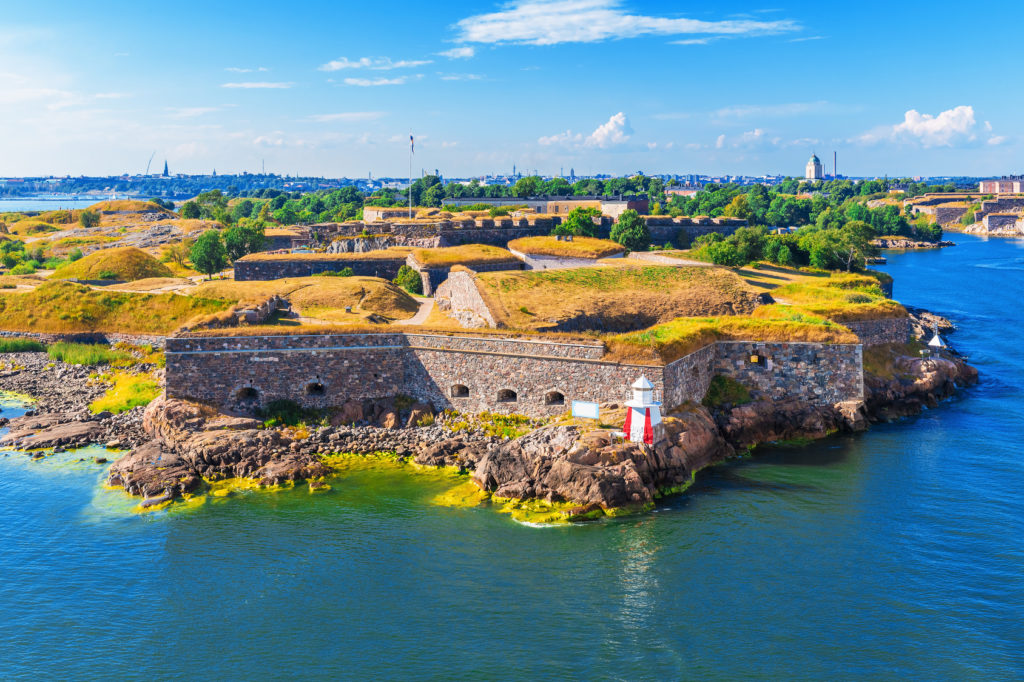 Getting Around in Helsinki

Most of the city’s main attractions are easily accessible on foot although you’ll find taxis readily available should you require one. Most taxi drivers will speak excellent English. The transport of choice amongst locals is the highly efficient tram network, just pick-up a day-pass at the main Tourist Information Office (Pohjoisesplanadi, 19) which covers you for all public transport.

The historic Central Railway Station (Kaivokatu 1) is a tourist attraction in its own right which serves as the main transport hub of Helsinki. Here you can move between the tram, bus and train systems.

Of particular interest to many cruise ship arrivals is the ‘hop-on, hop-off’ bus service which transports passengers around most of the city highlights. Buses depart from the Senate Square every 30 minutes.

One Night in Helsinki

Some cruise lines schedule an overnight in Helsinki which allows you to enjoy some of the city’s cultural delights. The Finnish National Theatre (Läntinen Teatterikuja 1) is the top venue for stage productions along with the City Theatre and Swedish Theatre. Check out their scheduled performances in advance so that you can order tickets before travelling. Music lovers should take a look at what’s on at the Helsinki Music Centre concert hall which is home to both the Helsinki Philharmonic Orchestra and the Finnish Radio Symphony Orchestra.

If you’d prefer to simply go to dinner on your night in Helsinki then you’ll find a fine selection of high quality eateries including Michelin-star restaurants Chef & Sommelier (Huvilakatu 28), Restaurant Demo (Uudenmaankatu 9-11) and Restaurant Ask (Vironkatu 8). All three of these top-class establishments offer exquisite dining in beautiful surroundings and are highly recommended if you’re looking for a special evening in the Finnish capital.