As you disembark at various ports of call on your Greek island cruise you will often be mesmerised by the sheer beauty of what you encounter. Unfortunately, Heraklion is not such a place! This busy commercial centre of more than 140,000 people is the 4th largest city in Greece and the capital of Crete. Located on the island’s north coast it is best known for its airport which attracts millions of holidaymakers every year and for its proximity to the ancient Minoan city of Knossos. In spite of its modernity there’s plenty here to allow cruise ship passengers to enjoy during their day in port.

The Port of Heraklion is ideally located for cruise passengers, lying just 750 metres from the central tourist district. The main city attractions are accessible on foot though you’ll need transport to get to the Knossos Palace archaeological site. There is the usual hop-on, hop-off bus option but it’s hardly worthwhile in such a small place where the centre is pedestrianised anyway! 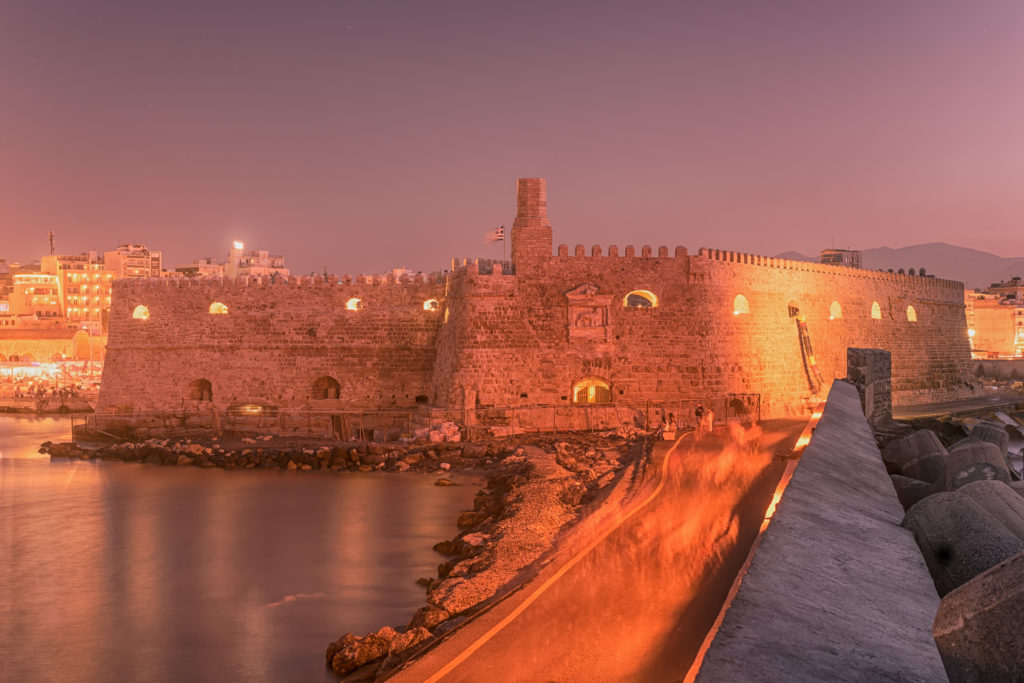 If you’re joining or leaving a cruise in Heraklion you’ll most likely be passing through Heraklion International Airport which lies just 4km south-east of the city’s port. The journey should take no more than 10 minutes by car. During the low-season the airport only deals with a limited number of domestic flights but attracts so many seasonal charters during the summer months that it is the country’s second busiest airport. Most visitors from North America will connect in Athens for flights to and from Crete.

Insider Tip: The airport is named after Nikos Kazantzakis who is best known for writing ‘Zorba the Greek’. He was excommunicated by the Greek Orthodox Church which prevented him being buried in a cemetery. As such his final resting place is a much-visited tomb outside the south-western corner of the city walls.

There are frequent bus services to and from the airport as well as ample taxis outside the arrivals terminal. However, the most convenient option is to pre-book a private transfer to and from Heraklion Port with Shuttledirect. They will arrange to have a vehicle and driver awaiting your arrival and provide transfers to hotels in Heraklion or directly to the cruise port. Other destinations around the island can be booked on request. 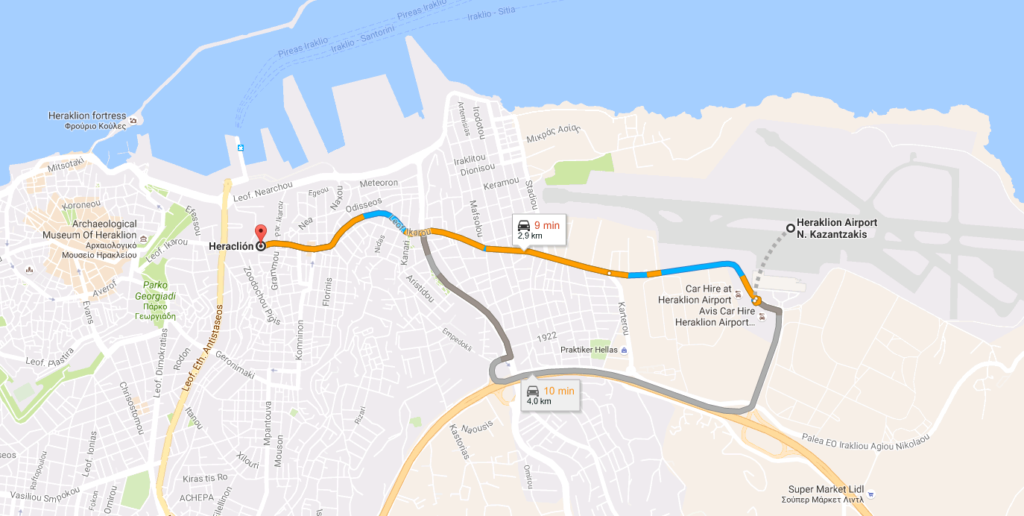 Unlike some port destinations, Heraklion is not awash with ‘must-see’ attractions. There are a number of interesting sights such as the Historical Museum of Crete and the Koules Venetian Fortress which overlooks the harbour. However, it is the palace of Knossos on the outskirts of the city which is the stand-out attraction for cruise passengers visiting the Cretan capital.

Knossos Palace: Crete was home to Europe’s oldest civilization who were known as the Minoans (named after King Minos) and occupied the island from approximately 3000 BC to 1100 BC. Knossos was the largest Minoan site which was first excavated by the British archaeologist Arthur Evans in 1900. At its peak this ancient city is believed to have been home to a population of around 100,000. Towards the end of the Bronze Age it seems that Knossos was abandoned although the reasons for doing so remain uncertain.

The site lies just 6km south of the port area and can be reached by road in around 20 minutes. Many cruise lines offer shore excursions directly from the ship otherwise you can take a taxi from outside the port. There are also frequent bus services departing from Heraklion’s main bus station which is only a few minutes’ walk from the port.

There are private guides available for hire at the entrance to the site if you’re interested in learning all about its fascinating history. For visitors planning on also visiting the Heraklion Archaeological Museum there is a combined entrance ticket available. 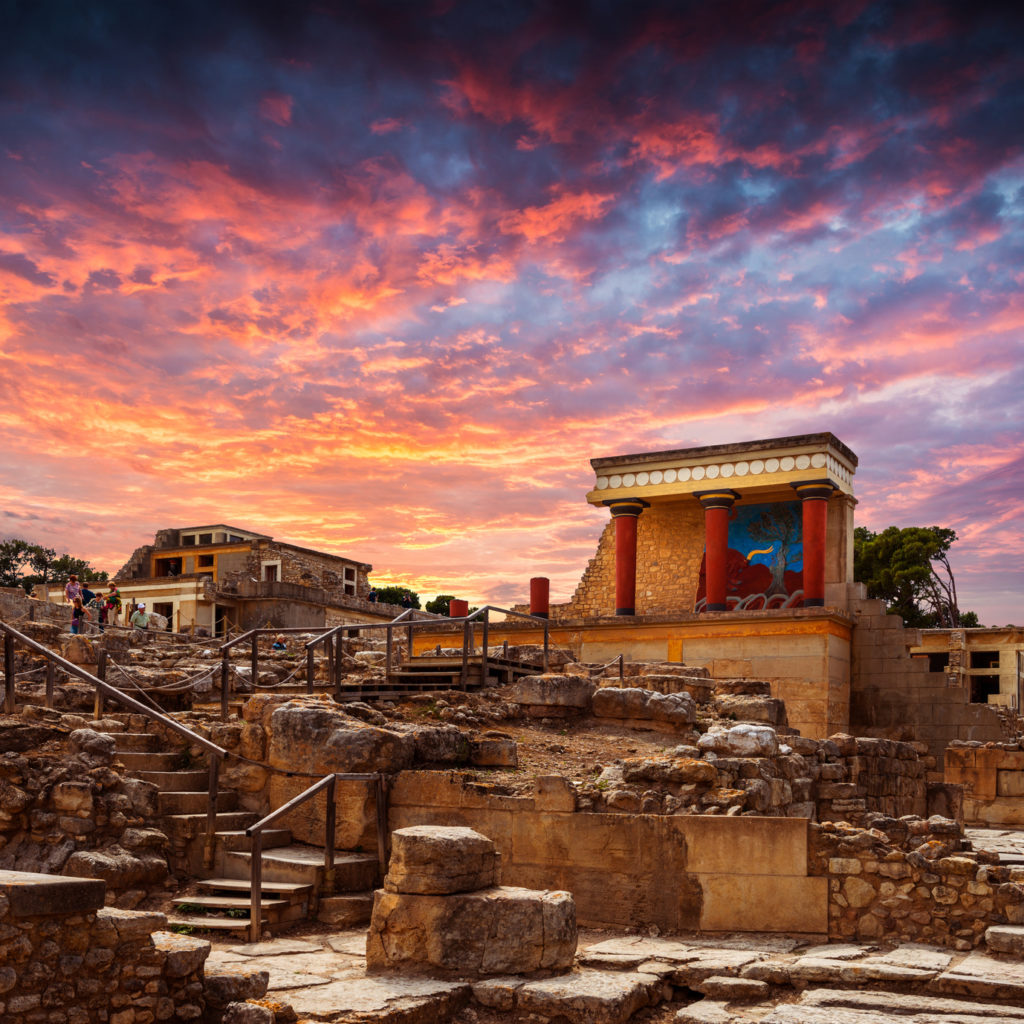 Archeological Museum: As far as museums are concerned the National Archaeological Museum in Athens will most likely be the top attraction for history buffs on your cruise. However, the Heraklion Archaeological Museum shouldn’t be too far behind. It is dedicated to the vast number of ancient artefacts discovered at sites all over Crete with special attention given to treasures from the local Minoan civilization. The most famous exhibit is the Phaestos Disc which contains a clockwise series of signs whose meaning has never been agreed upon.

Insider Tip: A nice souvenir to pick up in Heraklion is a piece of jewellery showing the Phaestos Disc. You’ll find stalls on Market Street selling silver earrings and the like otherwise you can take a look in an official jewellery shop.

Lion Square: Located right in the centre of town this square which is dominated by the impressive Morosini Fountain is central to the commercial and social life of Heraklion. It’s a popular spot with tourists who can take a seat at the terrace of one of the cafés here and absorb the atmosphere of the vibrant downtown area. Popular choices for a light lunch in these parts include ‘gyros’ which are pita breads stuffed with pork and a tzatziki sauce or flaky pastries containing ham and cheese.

One Night in Heraklion

If your visit allows for an overnight in Heraklion then a great way to spend it is to take a long walk along the seafront in the early evening then head for a restaurant with majestic views over the Aegean Sea. One such place is the Paralia Seaside Restaurant (Sofokli Venizelou 5) at the Venetian harbour which serves a good selection of traditional Greek cuisine including some excellent seafood dishes. If you’re more interested in the experience of a traditional taverna than the sea views you should head for Erganos (Georgiou Georgiadou 5) which mainly attracts locals rather than tourists. It is widely considered to be one of the best restaurants in Heraklion for Cretan cuisine.