Anyone staying in or around the wonderful city of Antalya should definitely include a visit to the ancient city of Termessos, a place steeped in legends and one that is regarded as unique by many international organisations. Located high up in the Taurus Mountains at an altitude of 1000m, it is a spot that is quite tricky to reach. Once you have made the journey, however, you are rewarded with some of the most amazing views – especially when you take a seat in the archaic theatre that overlooks an incredible vista.

As part of the National Park, Termessos’s remains lay undisturbed among dense pine forests. They are home to a number of rare species of flora and remain untouched by mass tourism.

The road to the ancient city is rather narrow. Its winding curves take you along the original route that was once the main road that entered the city and dates back to the second century AD. As you approach the city from Antalya, after 8.5km you’ll see a car park adjacent to the remains of the Temple of Artemis and Hadrian. From there you follow a steep path that leads uphill and passes two significant lines of city walls, which form the boundaries to the remains of aqueducts and water cisterns. 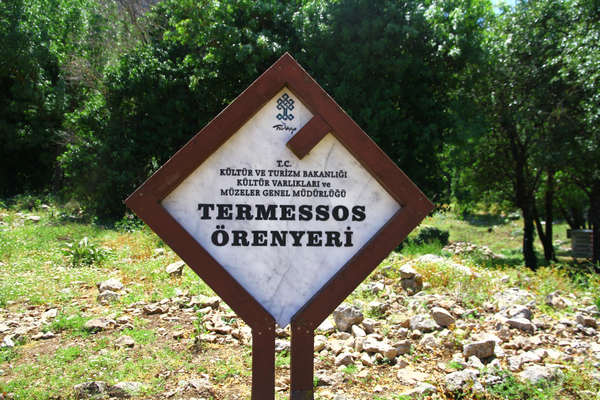 The most important feature in Termessos is definitely the ancient theatre that stands proudly amidst the Taurus Mountain peaks. Built in the Hellenistic period, the theatre was constructed in accordance to Greek style and features an auditorium that would have seated 4,200 people. Open passages weave between the stage and the auditorium and, despite undergoing alterations during Roman times, the theatre has retained much of its original Greek architecture.

The expansive square that was once flagged on three sides by colonnades is a must when you visit Termessos. The stoa on the northwest portion of the agora dates back to the second century BC, while the north-eastern one was erected during Roman times, probably in the first century AD. 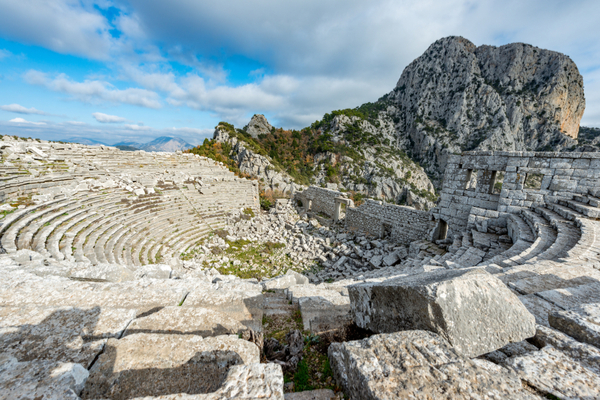 The gymnasium and baths were such important buildings in the time of the Greeks and you can visit them if you make your way to the top gate of the city. Some parts are out of sight underground but you can still a good idea of what the place looked like over two thousand years ago.

One of the best-preserved buildings in this ancient complex is the Bouleuterion, which was once a place of meeting for the city council. It then existed as an odeon, a small theatre built for performances of music and poetry.

There are several excellent temples on the site in differing states of preservation, and a necropolis as well. In short, this ancient site has enough to keep you exploring for several hours.

It is worth noting that the ruins cover a large area, so if you want to make the most of your visit you must be prepared to do a reasonable amount of walking. I would advise you bring lots of water and snacks too.

Come get acquainted with the site and discover that it is an endless treasure chest of marvellous finds! 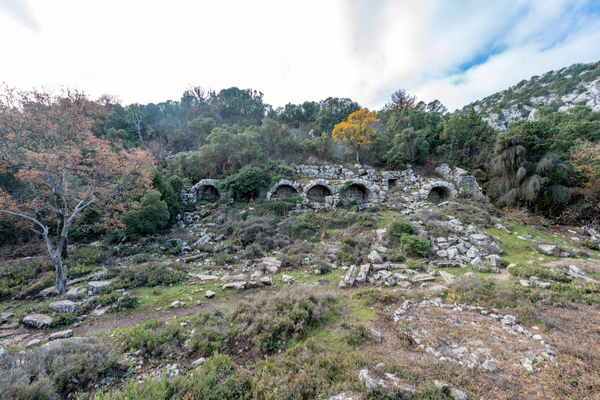 White Garden Hotel – A personal favourite, the White Garden Hotel, with its Kaleiçi-style features, authentic courtyard and fabulous views of the Taurus Mountains, is a real gem. Not only are the rooms beautifully furnished, with high ceilings and cool tiled floors, but they are also all air conditioned and provide water that is heated by solar power. Breakfasts are hearty and healthy and are a great way to fuel up before heading out to explore the old town and city walks. Close to Mermerli Beach and the Old Harbour, this spot is a fabulous find.

Sea Side Hotel – Beautifully appointed and perfectly situated, the Sea Side Hotel is only a minute’s walk from the golden sands of Konyaalti Beach. For me, the air conditioning is a huge bonus, especially for those late afternoon siestas when you need to recharge your batteries before heading out for the evening. Rooms are large, airy and have a private balcony furnished with chairs and a table, perfect for enjoying a sundowner or two. There is free WiFi, which is a must for independent travellers, and the breakfast buffet served here is excellent, especially when taken in the shade of the garden.

How to Get to Antalya

With many flights a week heading from London to Antalya Airport, the closest airport to the town, there are plenty of choices when it comes to making the four hour journey. There are multiple airlines that provide direct flights from London to Antalya, including Jet2 and easyJet, and prices for a return ticket can be low if you do your homework.

Getting from the airport into town could not be easier if you book a transfer with Shuttle Direct. Offering professional and reliable services and both private and shared vehicles, they will have a driver meet you in arrivals and take you straight to your final destination in a timely and efficient manner. The 20-minute journey from Antalya Airport could not be easier, especially if you book in advance with Shuttle Direct. 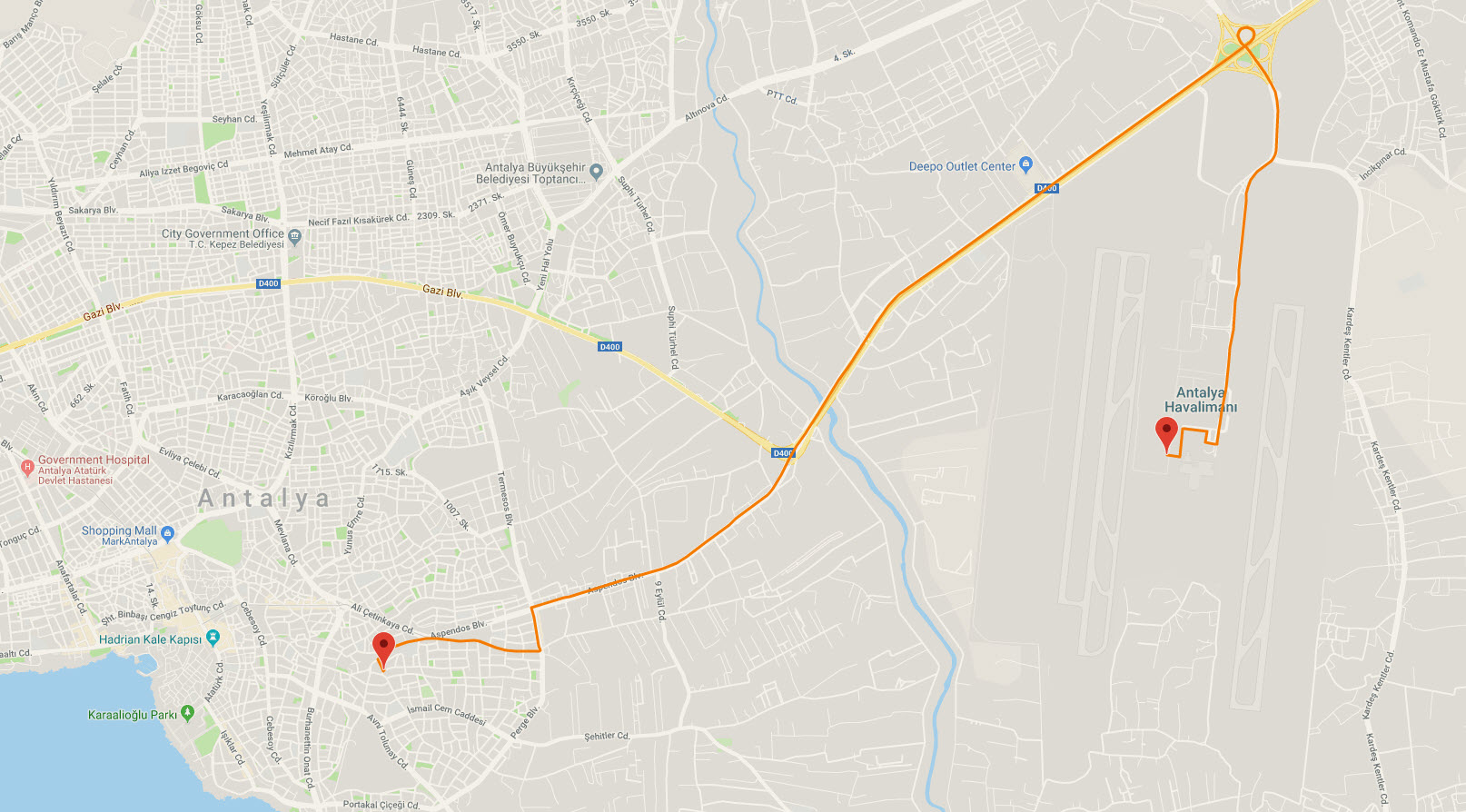 Shuttle Direct is one of the go-to companies for processional and reliable transfers in Europe and North Africa. We provide an excellent service that aims to take the stress out of travel. Book in advance and let us do the rest. You can choose a shared or private transfer and expect exemplary service no matter where you are travelling.