The Greek island of Kos is best known as the birthplace of Hippocrates, the father of western medicine. It was here that the ancient physician learned his trade and wrote the Hippocratic Oath which is still sworn by newly qualified doctors to this day. The main excursion for cruise ship passengers arriving in Kos Town is to the nearby Asklepion Temple where Hippocrates studied and taught as well as founding its renowned Medical School.

The island of Kos is 40km in length and lies just 4km off the Anatolian coast of Turkey in the Aegean Sea. Its main town is Kos Town which is also the location of the island’s main ferry terminal which is where cruise ships arrive. As you approach the dock you’ll see the Neratzia Castle which is one of the area’s main attractions. Having disembarked from your ship it’s no more than a 200m stroll into the town centre.

Kos is an important destination for package holidaymakers with over 2 million passengers passing through its international airport every year. The airport is located near to Andimachia village some 24km south-west of Kos Town. The journey by road takes about 30 minutes. If you’re meeting your cruise ship in Kos (or your cruise ends here) you can arrange a transfer from Kos Airport to the cruise terminal with Shuttledirect. They also have vehicles and drivers available for transport to destinations all over the island. Taxis are widely available for airport transfers but bus services can be fairly inconvenient and unreliable. 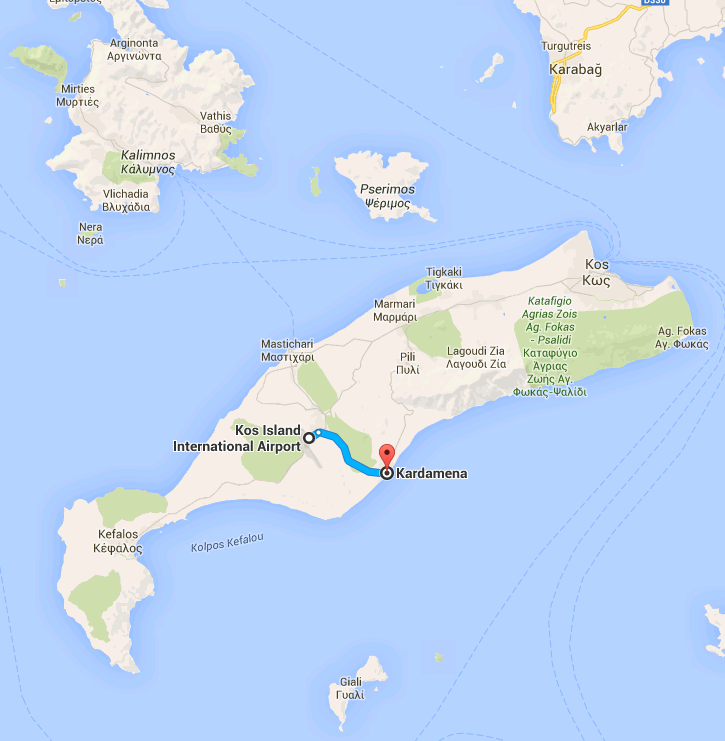 Getting Around in Kos

Whilst you can easily wander around the town centre on foot, there’s a small green road train which departs from Akti Miaouli in the harbour. This takes visitors on a short tour of the town’s main attractions in about 20 minutes. If you want to visit the Asclepeion Temple which is about 4km away you’ll need to look out for the blue road train which transports visitors to what is the local area’s main archaeological site. Taxis are available for trips to any destinations including local beaches.

Insider Tip: Cruise ship passengers wandering into the centre of Kos Town inevitably congregate in Eleftherias Square which is home to a wide selection of caféss and restaurants together with a number of souvenir shops and a fascinating indoor market. A great spot from which to watch the world go by is Café Aegli which is right on the main square. This is a friendly place run as a women’s cooperative where they serve excellent lunches made from fresh local ingredients.

Neratzia Castle: As you approach the harbour on your cruise ship you’ll see the island’s 14th century castle which is the dominant feature of Kos Town. This former Crusader fort was originally separated from the mainland but now joins the main promenade by means of a bridge. You get a great view of the harbour from the top of the towers but there are a lot of steps and little shade so plan accordingly. As you enter the castle look out for the famous Plane Tree where Hippocrates is believed to have taught his students. 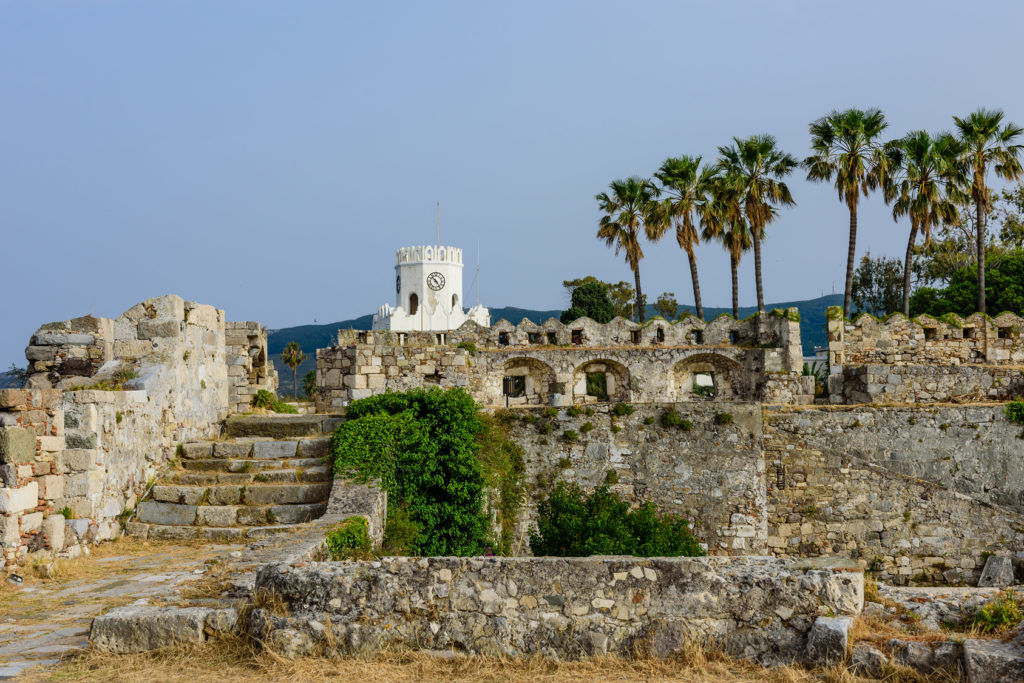 Ancient Agora: A short stroll from the port area is the ancient Agora which dates back to 366BC and is believed to have been one of the largest market places in Ancient Greece. Most buildings from the original site have been destroyed over the centuries by earthquakes with subsequent settlers using existing materials for their construction. This archaeological site is home to ruins dating from 4BC to 6AD with evidence of both Greek and Roman structures. 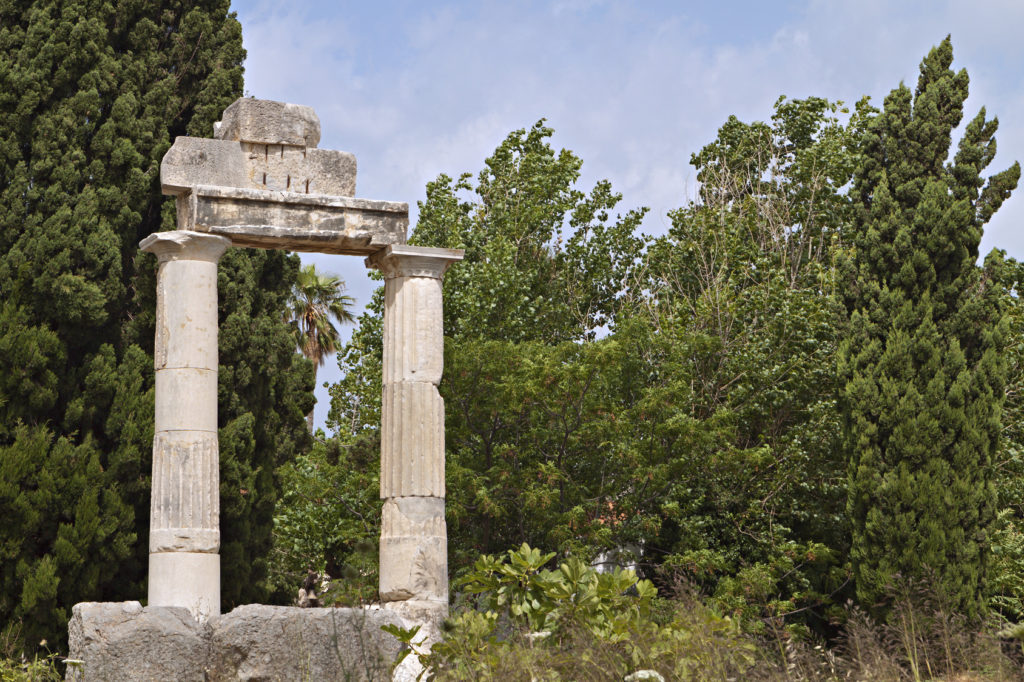 Asclepeion Temple: This is the most important archaeological site on the island of Kos and lies just 4km inland from the port. The purpose of this site in ancient Greece and Rome was to serve as a healing temple where people would go to be cured from whatever ailed them. The temple which dates back to 3BC is dedicated to Asclepius who is the Greek god of medicine. It is built on three levels with terrific views back towards Kos Town. Information is provided in English throughout the site but a visit in the company of a local guide will prove most rewarding. If your cruise line doesn’t provide transport you can easily get there on the mini train from Kos harbour. In his youth it is believed that Hippocrates trained at the medical school here and wrote the famous Hippocratic Oath.

Insider Tip: Be aware that there are a lot of steps at the Asclepeion Temple so it isn’t recommended if you have limited mobility. In addition there’s little shade so the site can get extremely hot during the summer months. Make sure that you wear good walking shoes when visiting and carry plenty water. 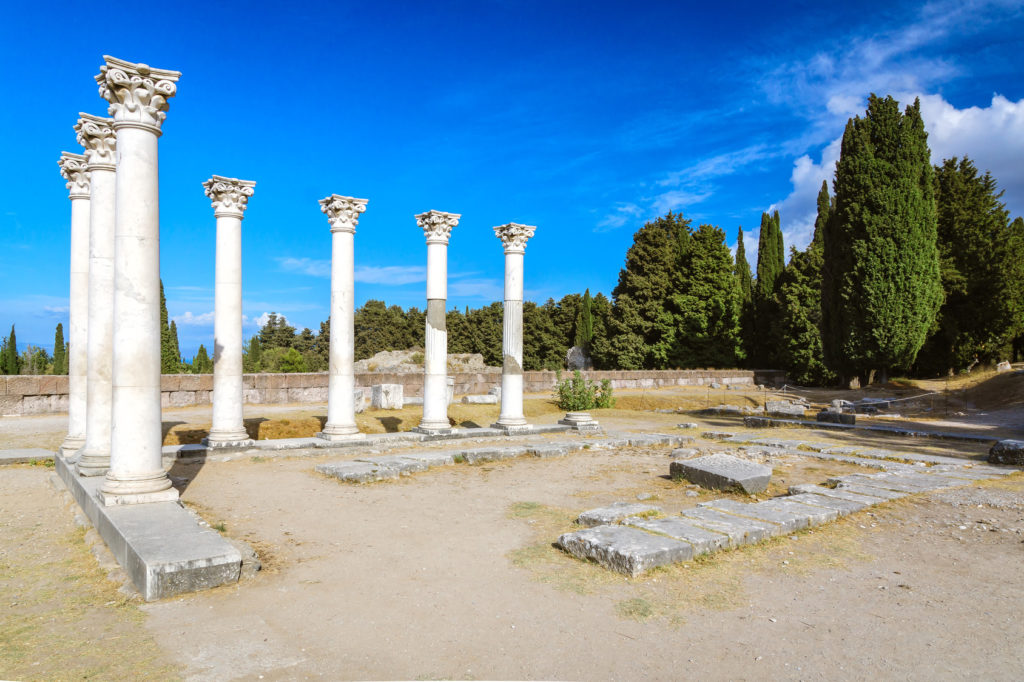 Archaeological Museum: You’re likely to come across a number of interesting archaeological museums on any cruise itinerary around the Greek Islands. This particular one is housed in a beautiful neoclassical building in Eleftherias square right in the heart of Kos Town. Exhibits include many artefacts discovered at archaeological sites in Kos and Rhodes dating back to prehistoric times and including impressive items from Ancient Greece and the Roman era.

Beaches: Whilst Kos Town and its environs have plenty of historic interest it’s always nice to head off to a beach during a short time in port. Whilst the main town beach lies right next to the castle walls a far better one is about 3km north of the harbour at Lambi. If you’d like to spend a good part of the day at the beach then it’s probably worth heading for Tigaki Beach which lies on the north coast some 12km from the port area. Local taxis are available to take you to these well equipped beaches which offer good lunchtime options at their seaside taverns.

One Night in Kos

If your cruise allows for an overnight stay in Kos between July and September you’ll be there at the time of the island’s main annual festival which is called the ‘Hippocratia’. It includes a whole range of events such as concerts, theatrical productions and sports competitions. You can check the full itinerary of events at the main tourist information office on Vasileos Georgiou which is near where cruise ships dock.

For a lovely evening meal in Kos Town you should head for Agkyra Fish Restaurant (14 G. Averof) which is renowned for its friendly service and fish dishes. Its location is perfect for a romantic evening with outside tables overlooking the sea. Another highly regarded place for seafood is Alberto (22 Averof Georgiou) which is on the beach with a terrace looking across towards the Turkish coastline.