The city of Marseille dates back to 600 BC when it was founded by the Ancient Greeks. Over many centuries it has served as one of the Mediterranean’s most important trading posts and is well established as France’s largest port and second largest city. The port’s seedy reputation was largely extinguished in the lead up to 2013 when Marseille served as European Capital of Culture. Major investment led to a rejuvenation of Le Vieux Port and the Old Town providing a much needed boost to the local tourism industry.

The Port of Marseille has plenty to offer visitors and hopes to attract 1.75 million cruise ship passengers this year making it one of the Mediterranean’s most popular ports of call. As well as numerous historical and cultural attractions in close proximity to the cruise port, there are also opportunities to take shore excursions to a number of popular attractions within the beautiful region of Provence.

Most cruise ships visiting Marseille dock at the Môle Léon Gourret which lies 7km north of the Old Port in the city centre. This port area is well equipped to cater for as many as seven large vessels and serves as a home port for Costa Cruises and MSC Cruises. A few smaller ships are allowed to dock at La Joliette near the Old Port.

From the main cruise terminal there’s often a free shuttle bus into the city provided by the Port Authority although this isn’t well publicised. Just follow the green line to reach the bus stop. Alternatively, there are paid shuttles made available by cruise lines together with local taxis. A local bus service (number 35) travels from near the port into the city but it’s a 15-minute walk to the bus stop and buses are often full. 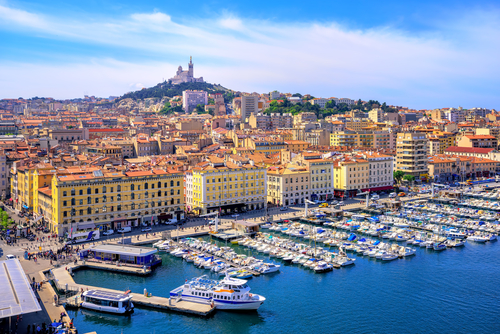 Passengers who are beginning or ending their cruise in Marseille will most likely be arriving or departing through Marseille Provence Airport which lies 20km north-west of the Léon Gourret pier at the main cruise terminal. There is no public transport between the airport and the cruise terminals so passengers would need to travel to Gare de Saint-Charles in the city centre then take a taxi to their ship.

Far more convenient is to either take a taxi or pre-book a private transfer from Marseille Airport to the cruise terminals. Shuttledirect provide such services to all cruise ship piers as well as to hotels in and around the Old Port. 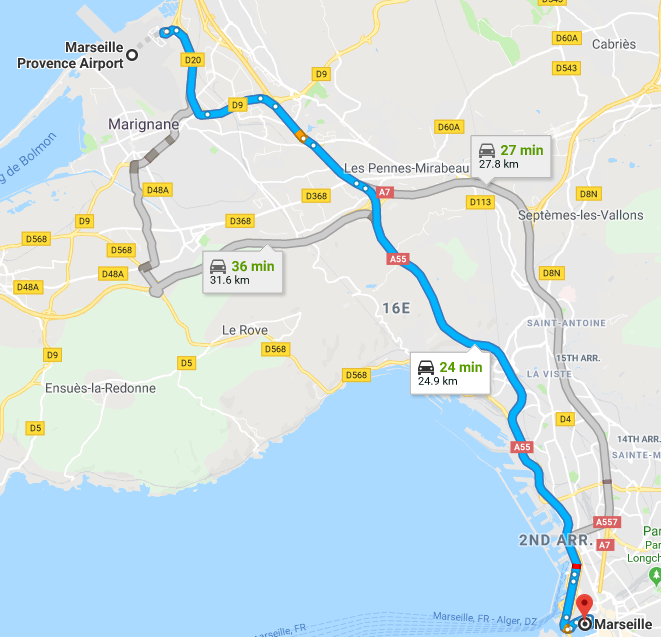 Getting Around in Marseille

Distance-wise most of the main tourist attractions of central Marseille are accessible on foot. However, it’s quite a climb up to the Old Town from the port so many cruise ship passengers like to jump on Le Petit Train from Quai du Port which offers an itinerary covering most of the key sights. In addition there’s a hop-on, hop-off tourist bus which provides a 90-minute city tour departing from the northern side of the Old Port. The city also has an extensive metro and tram network but these services aren’t particularly useful to tourists.

The Vieux-Port de Marseille is the first port of call for the majority of newly arrived cruise ship passengers. Whilst its fish market on the Quai des Belges is a reminder of the port’s traditional role, it is the eclectic mix of lively bars and restaurants which catch the eye of today’s visitor. As well as serving as the social centre for tourists and locals alike the Old Port stands in close proximity to a number of historic and cultural attractions.

Just south of the Vieux Port is the fortified abbey of Abbaye Saint-Victor (Place Saint-Victor) which dates back to the 5th century. Further south is the magnificent Basilique Notre-Dame de la Garde (Rue Fort du Sanctuaire) which is the city’s most recognisable attraction. The walk up to it is fairly steep so many visitors from cruise ships choose to get there by some means of tourist transport. 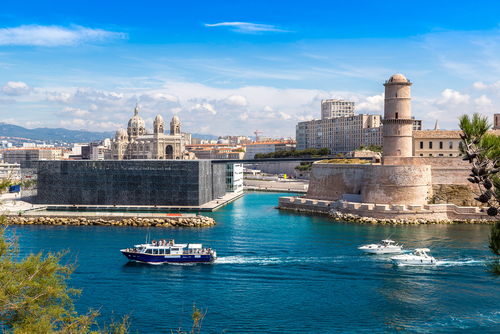 To the north of the port, next to the 17th-century Fort Saint-Jean, is the impressive Musée des Civilisations de l’Europe et de la Méditerranée which opened in 2013 as part of Marseille’s year as European Capital of Culture. Its excellent exhibitions are largely dedicated to the city’s role as a melting pot of European cultures.

Located up a steep hill to the north of the Old Port is Le Panier which is the atmospheric Old Town of Marseille. The area is accessible on foot but is also part of the Petit Train de Marseille itinerary. After wandering through a warren of tiny streets frequented by street artists and musicians tourists can enjoy a welcome break at any number of stylish cafés. Particular attractions of this part of town include the historic La Vieille Charité (2 Rue de la Charité) which now serves as a cultural centre together with the Cathédrale La Major (Place de la Major).

A popular excursion off the coast of Marseille is to the Ile de Chateau d’If which featured in Alexandre Dumas’s fictional novel “The Count of Monte Cristo”. It is home to a 16th century fortress which famously served as a prison until the end of the 19th century. Tour boats take 20-minutes to get there from the Old Port. Another highly recommended boat trip is along the mountainous coastline of the Parc National des Calanques to the south of the city. Two and three hour cruises also depart from Le Vieux Port.

Lying just 30km north of the Old Port is the beautiful university city of Aix-en-Provence which was the birthplace of the artist Paul Cézanne. This charming and highly cultured destination can be reached by bus or train from Gare de Marseille-Saint-Charles but cruise ship passengers would be advised to save time by getting there on official shore excursions offered by cruise lines. Another of the highlights of Provence is the wine-producing town of Cassis which lies just 23km south-east of the port and is frequently included on shore excursion itineraries.

Some cruise lines also offer excursions to Avignon which lies 100km to the north-west of the port. Whilst a visit to this city and its surrounding lavender fields is well worthwhile, the time spent on buses during a limited time in port makes this a questionable option especially when Marseille itself has so much to offer the first-time visitor.

One Night in Marseille

With a number of cruise lines using Marseille as a home port more and more passengers are finding themselves in the city for a night at the beginning or end of their cruise. Highly recommended for an overnight stay is Hotel La Residence du Vieux Port (18 Quai du Port) which is ideally located overlooking the harbour within easy reach of the city sights by day and the bars and restaurants of Le Vieux Port by night. Although a little expensive, the Miramar Restaurant (Quai des Belges) is one of the best places to try a traditional Provençal fish stew (bouillabaisse) in the Old Port.