From glamorous churches to fascinating museums, a trip to Italy is like entering a magical time warp – presuming, of course, that pizza and pasta were just as delicious several centuries ago! Although every ambitious tourist wanders through the ancient ruins of Rome and the winding streets of Venice, it’s worth venturing off the beaten path to fully immerse yourself in the country’s rich history.

If you’re a true history buff, why not wave goodbye to the masses of tourists and opt for a more authentically Italian experience in its smaller cities? On our route from Venice Marco Polo Airport to Bergamo Airport, our drivers often highlight the destinations of Padua, Verona and Brescia, which lie along the way. If you’re hoping to blend in with the locals and brush up on your Italian history, saying “Buon giorno” to these picturesque places may be right up your alley. Let’s take a look at what stunning sights await in these historic havens!

Although Padua is world-famous for its excellent university, which, after Bologna, is the second oldest in Italy, it’s often overlooked by those who’d rather get caught in tourist traps. While this causes them to miss out on Padua’s exceptional beauty, it’s a plus for you: you’ll be able to explore the city’s breathtaking sights in peace. Here are a few of our favourites. 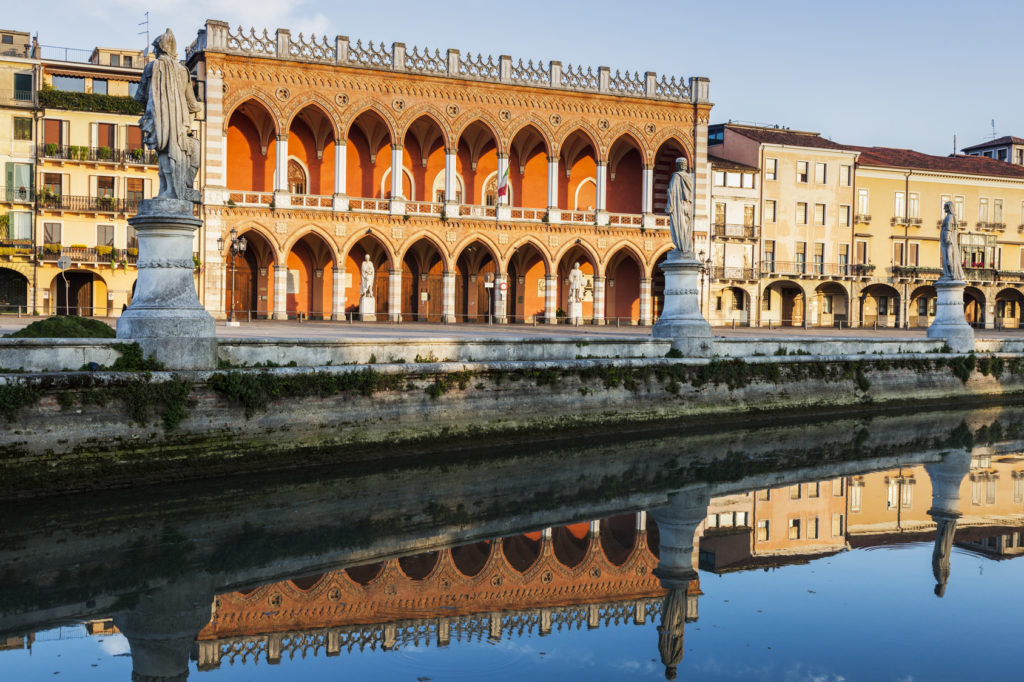 Duomo – While the Duomo is unassuming from the outside, it’s worth taking a peek inside. Here, you’ll find a stunning chancel crucifix by the Italian sculptor Giuliano Vangi, as well as an adjacent baptistery that dates back to the thirteenth century. The latter is particularly famous for its fresco, which makes use of a vibrant colour scheme to depict saints and the Madonna with animated facial features.

Cappella degli Scrovegni – If you’re an art history fanatic, a visit to the Cappella degli Scrovegni is an absolute must. This elegant chapel is world-renowned for its early fourteenth-century frescoes by the celebrated painter Giotto. Thanks to the humanistic frescoes, which portray biblical scenes from Christ’s Annunciation to his Ascension, Padua’s Cappella is often called Padua’s Sistine Chapel – and very much lives up to this daunting comparison!

Basilica di Sant’Antonio – This thirteenth-century church showcases a confusing – albeit beautiful – mix of architectural styles, ranging from Romanesque to Gothic to Baroque. The enormous interior is full of gems from the Renaissance, including the tomb and relics of Padua’s St. Anthony. There’s also an adjoining monastery with five cloisters that lend themselves to a serene stroll. 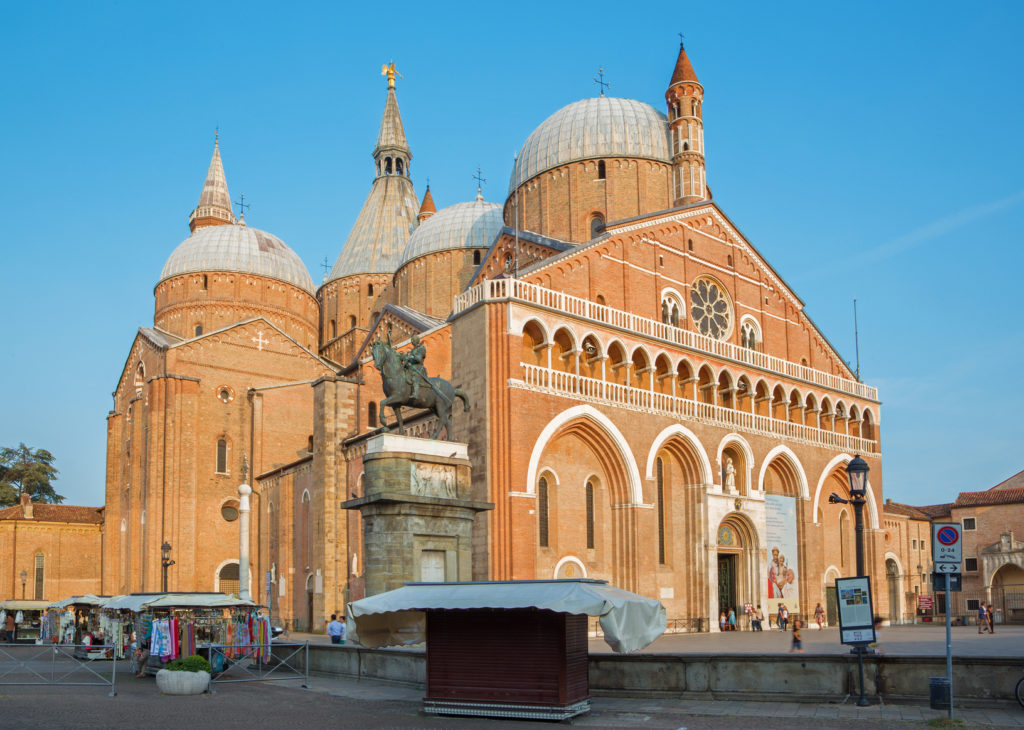 Museo del Risorgimento e dell’Eta Contemporanea – To gain a better understanding of Padua’s (and Italy’s) longstanding history, why not pop into the museum? The neoclassical building itself is filled to the brim with artefacts, telling the story of Venice’s decline in 1797 to the revolutions of 1848. And why not finish off your visit with a famous caffè correto, a coffee with an alcoholic kick, at the museum’s cafe?

Shakespeare aficionados will associate Verona with the tragedy of Romeo and Juliet, and are known to scope out the physical landmarks that inspired this heartbreaking play (such as Juliet’s house). However, even if you’re not a literature buff or are not trying to feel better about your relationship problems, you’ll uncover plenty of historical highlights in this pulsating city. 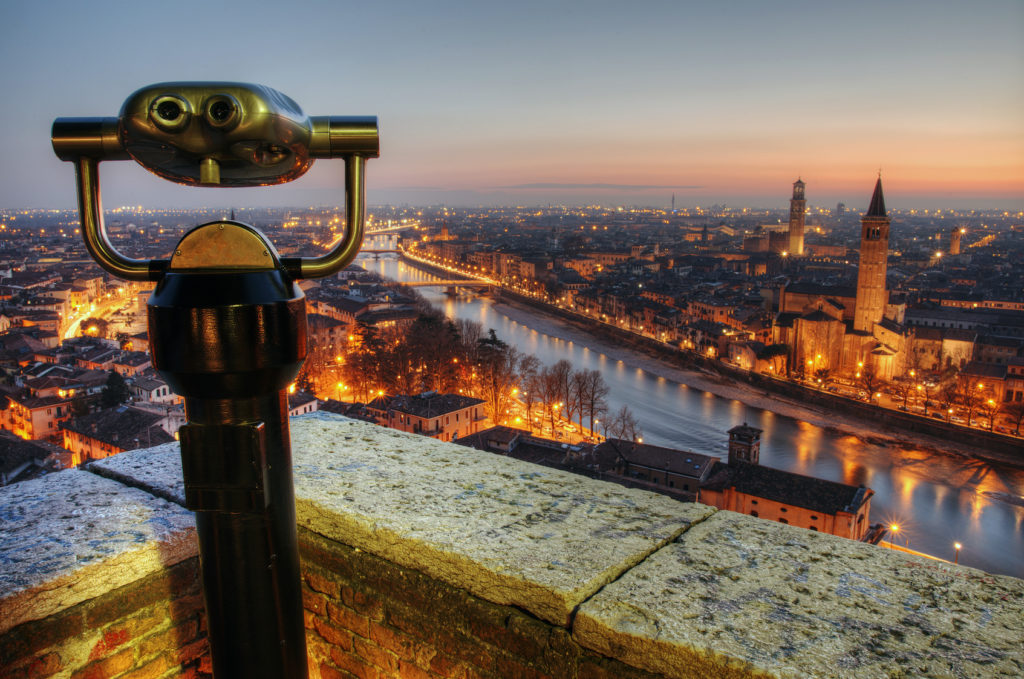 Roman Amphitheatre – This marvellous construction dates back to the Roman Empire, and is the eighth largest amphitheatre of this time period. Miraculously enough, the structure survived a devastating earthquake in the twelfth century and – perhaps even more surprisingly – is still in use today. In the summer months, the amphitheatre serves as an open-air venue for operas, accommodating up to 30,000 spectators. Why not buy a ticket to a performance, or simply wander around this imposing arena during the day?

Ponte Pietra – This bridge is an extraordinary exhibit of Verona’s extensive and turbulent history. The Ponte Pietra was first built in the first century BC and was well protected by locals, who worked tirelessly to keep its ancient arches intact. When the bridge was shattered by German forces in the Second World War, Verona’s devastated citizens actually dove into the river to retrieve all of its pieces and to reconstruct the bridge in its entirety. Seeing this touching tribute to the city’s Roman origins with your own eyes is a truly humbling experience. 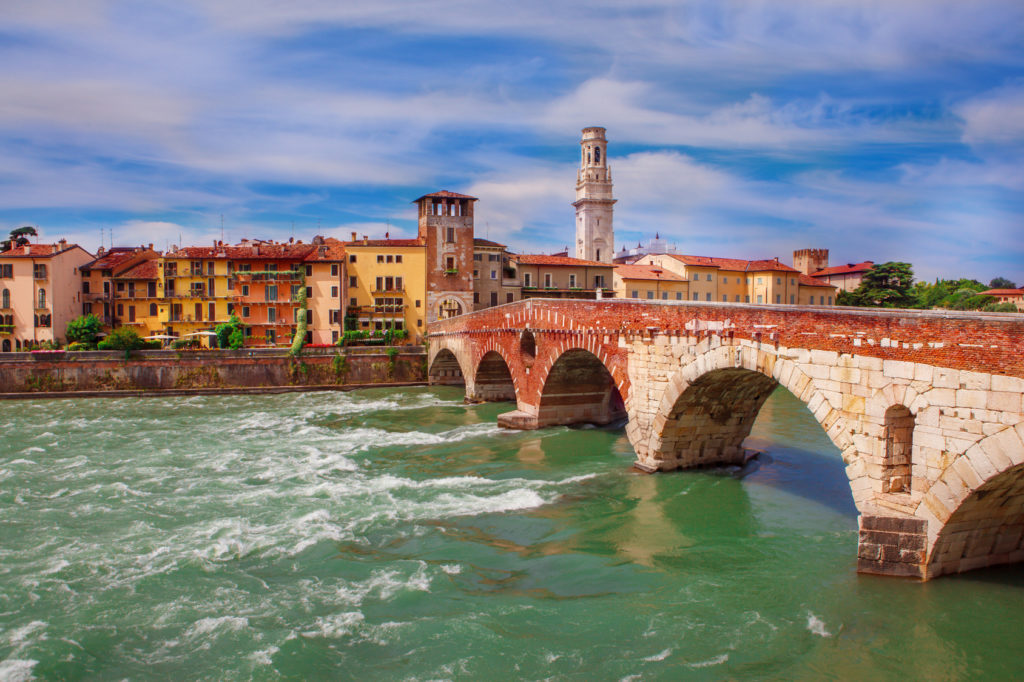 Torre dei Lamberti – If you’d like to rest your mind (and even get a little exercise!), there’s nothing quite as effective as gazing out over Verona and its mountainous surroundings. To get the best view of the area, climb to the top of the Torre dei Lamberti, a watchtower that’s 84 metres high. Although the tower’s construction began in the twelfth century, it was only finished in 1463 (defeating its original purpose of warning citizens of Venetian attacks). If you’d like to see its octagonal bell tower, as well as a picturesque panorama, either climb the stairs or take the lift up most of the way.

Recommended Visit Time: Half-Day Visit for the above attractions. For a more comprehensive overview of Verona, count on a full-day excursion.

On our transfers from Venice Marco Polo Airport to Bergamo Airport, we also pass by Brescia, a city that’s often unfairly overlooked. While Brescia is frequently criticised for its somewhat unsightly surroundings, its Old Town couldn’t be more charming. In fact, several of Lombardy’s most significant Roman remnants are on display in the city centre, which are well worth discovering for yourself. 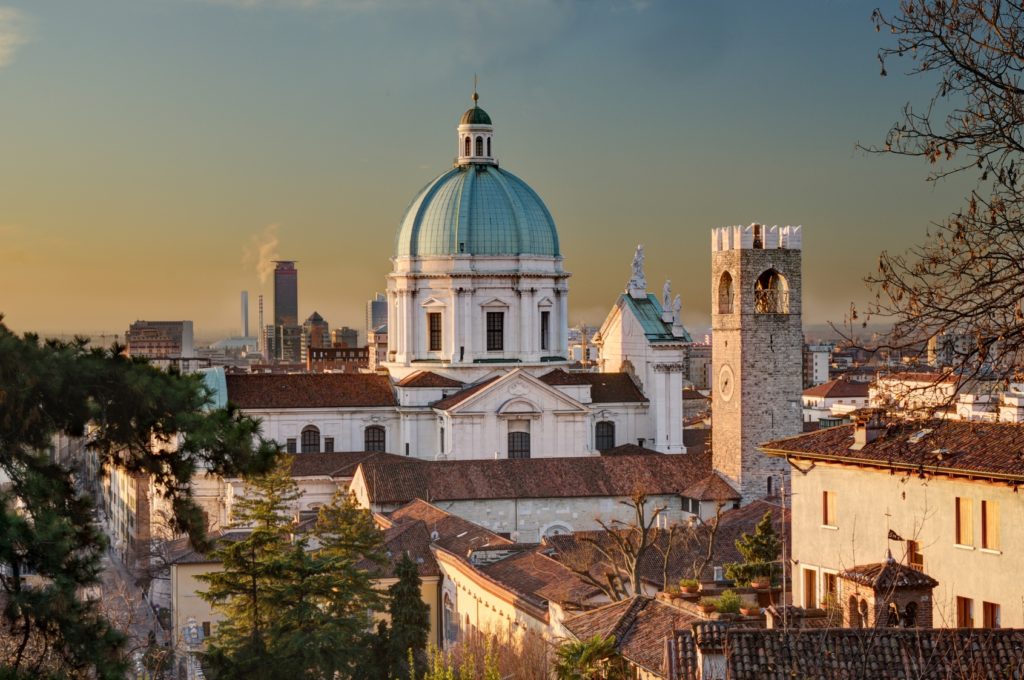 Monastero di Santa Giulia & Basilica di San Salvatore – From fantastic frescoes to marvellous mosaics, you’ll find a range of artistic troves right at your fingertips in this complex, which houses both a monastery and a church. Interestingly, the monastery, which dates back to at least the eighth century, was built around two Roman residences, whose well-preserved ruins still stand in the monastery’s garden today. Along with marvelling at these ancient houses’ frescoes and floor mosaics, the site’s sixteenth-century chamber is a special sight to behold.

Duomo Vecchio – Much like the above attraction, this circular basilica is an eclectic testament to Brescia’s long-lasting history. Although the Romanesque Duomo that we see today was erected in the eleventh century, some believe that it took over some of the features of a sixth-century church which previously stood in the same spot. In addition, it’s said that its floor mosaics may date back as far as the first century BC, and that they were originally part of a bath complex. 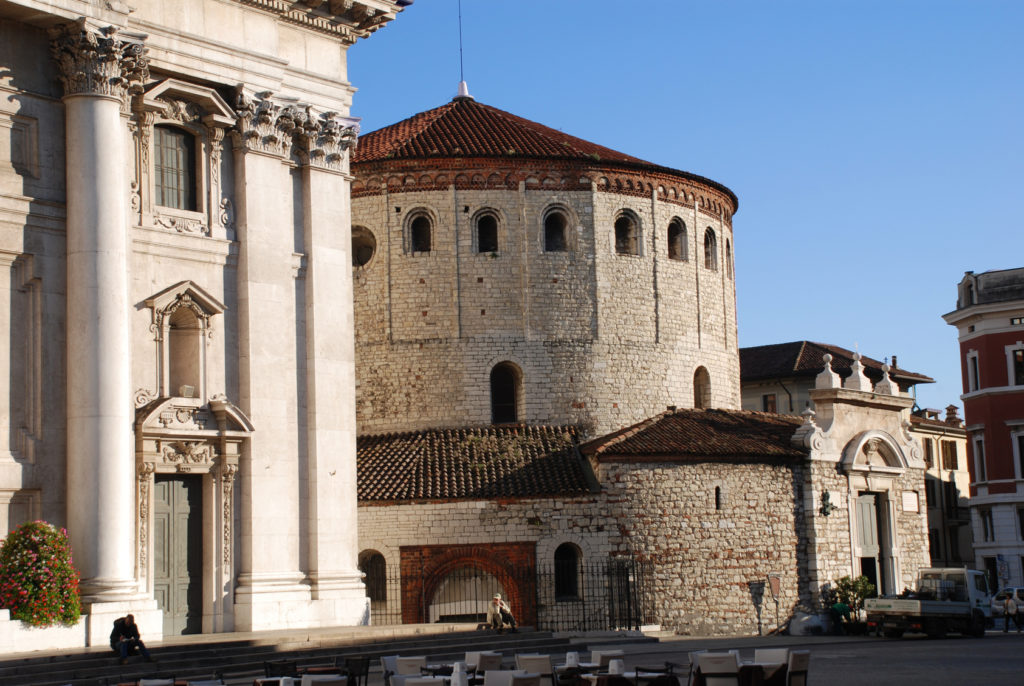 Tempio Capitolino & Teatro Romano – It’d be a real shame not to stop by this Roman temple during your visit. This sanctuary was commissioned by Emperor Vespasian in 73 AD, and is well-known for its Corinthian columns, remarkable frescoes, mosaics and altars. If you buy a ticket to go inside, you’ll also be able to see the ancient Teatro Romano, which could once accommodate 15,000 people.

Recommended Visit Time: Half-Day Visit for the above attractions. If you’d like to explore the Old Town in its entirety, opt for a full-day outing.

Although a transfer from Venice Marco Polo Airport to Bergamo Airport may seem unexciting at first glance, it’s interesting to think that you’re actually passing by three of Italy’s most historic – but least visited – cities. The above attractions only give you a partial insight into these destinations’ highlights; in reality, there are so many that you could easily spend a few days in each city! So why not indulge your inner historian and get exploring on your next Italian holiday?

Need a fast, comfy and dependable ride from the airport to your destination? Look no further than Shuttle Direct, Europe’s and North Africa’s principal airport transfer provider. Whether you’d like a private transfer or an economical group ride, you’ve got it! Don’t delay – start planning your trip today.

NB. This route guide has been compiled as an aid to visiting the region. Your airport transfer service from Venice Marco Polo Airport to Bergamo Airport does not include stops to these destinations.