For many centuries the north-east coast of Sicily has been considered of major strategic importance to the many civilisations who have settled here. Messina is the region’s busy ferry port which serves as a major transport hub for the high volume of traffic and passengers arriving from the mainland. Not the most beautiful of places it was destroyed by an earthquake in 1908 then was again reduced to rubble during the Second World War. Most cruise ships visiting Messina do so to allow passengers to visit the beautiful town of Taormina which lies just down the coast or Mount Etna which is a little further afield. Film buffs will also enjoy combining a shore excursion to one of these destinations with the opportunity to visit traditional Sicilian villages which were used in the filming of the Godfather movies. 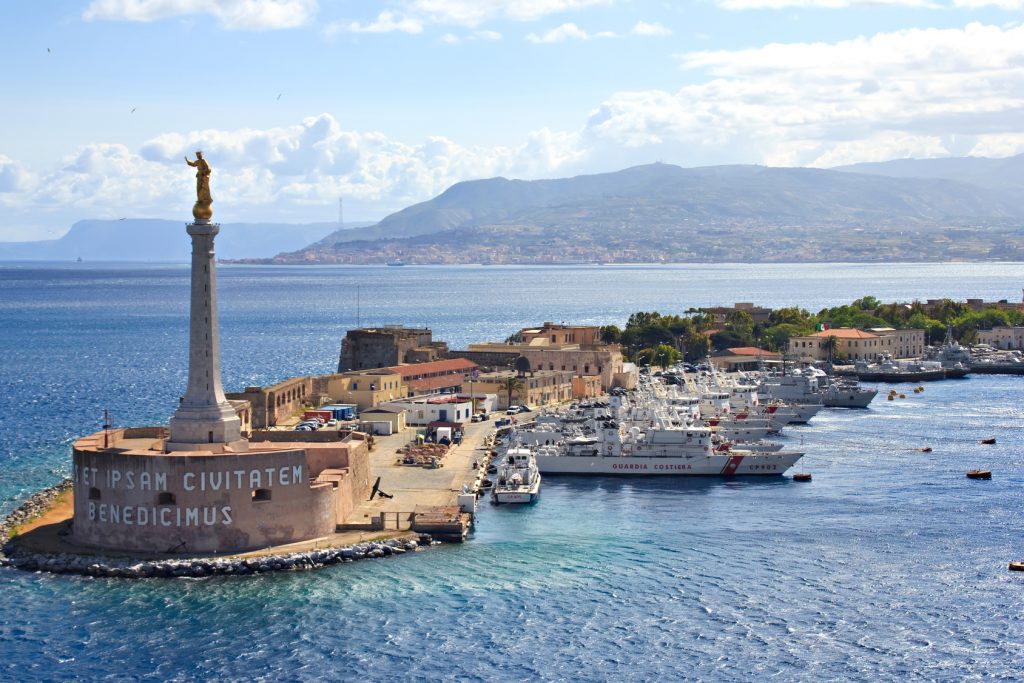 Every day a large volume of ferry traffic makes the 5 km. journey across the Strait of Messina from Calabria in southern Italy to the Sicilian port of Messina. Cruise ships visiting the port arrive near Via Vittoria Emmanuele II which is a lot calmer than the nearby ferry port and is within a 10-minute walk of Piazza del Duomo in the heart of the city centre.

Transport to Messina from Catania Airport

The closest airport to Messina is Reggio Calabria Airport which lies 30 km. away on the mainland. This is a regional airport which only caters for domestic arrivals from Milan and Rome. Cruise ship passengers who are meeting a ship in the Port of Messina or are travelling on a cruise which ends here are best advised to travel through Catania Airport which lies 110 km. to the south. This is one of Italy’s busiest airports with international flights from all over Europe including ones provided by popular budget airlines including easyJet, Ryanair and Vueling. 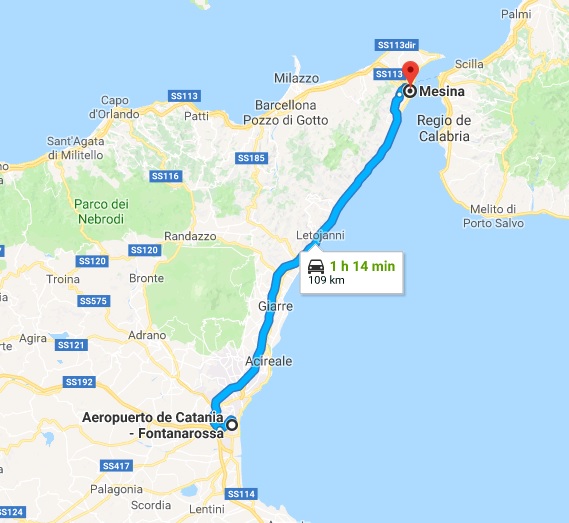 Messina’s Piazza della Republica is home to both the city’s bus and train stations. Passengers arriving at Catania Airport can take one of several daily bus services which travel to Messina or they can take the airport bus into Catania then catch a train to Messina. From Piazza della Republica it’s just a short walk to the port. Taxis are more than willing to provide the transfer from Catania but it’s important to agree a price before departing. The most convenient option is to pre-book a private transfer from Catania Airport to Messina and have a driver waiting for you on arrival. The scenic drive along Sicily’s north-east coast usually takes less than 90 minutes.

Getting Around in Messina

Passengers who decide to stay in Messina during their visit can easily get around the main sights on foot. There is a hop-on, hop-off bus service which operates from outside the port but its short itinerary in a town with a limited number of attractions makes it difficult to recommend. Plenty taxis are available as you depart from the port and can prove to be a good option when shared with fellow passengers for trips to Mount Etna. Just be sure to confirm prices before setting off. Buses and trains heading for Taormina depart from Piazza della Republica which lies just 1km south of where cruise ships dock.

If you decide to stay in Messina rather than head out on an excursion along the coast to Taormina or to Mount Etna be prepared for a busy port city with only a limited number of tourist attractions. Most of Messina’s historic buildings had to be rebuilt following a devastating earthquake in 1908 and then again as a result of Allied bombing campaigns during the Second World War. 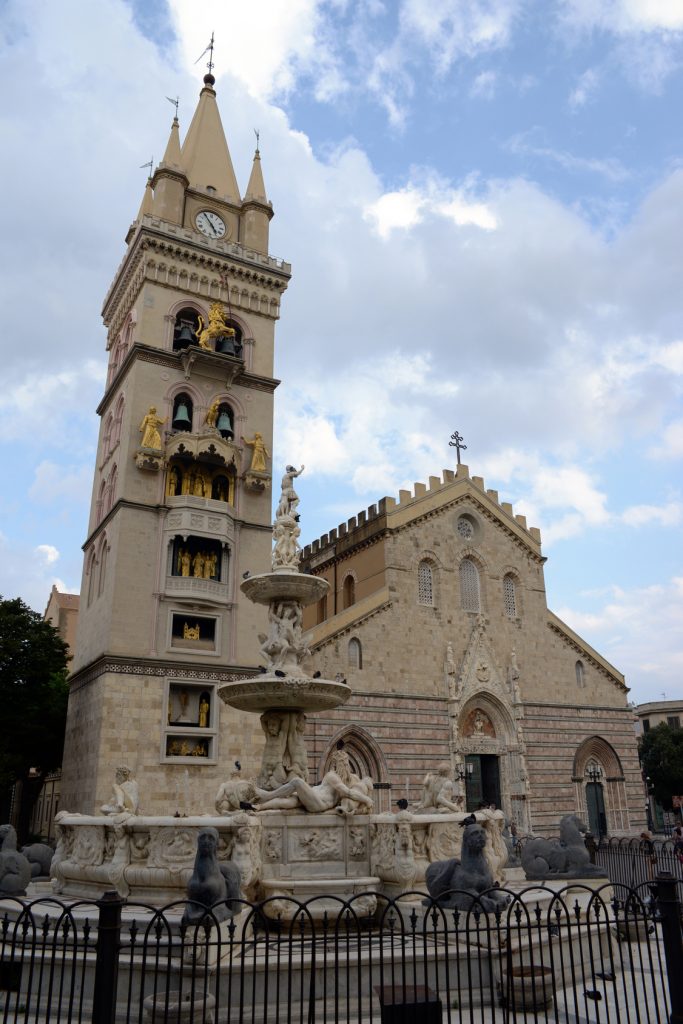 Dating back to the 12th century, the main sight is the beautiful Duomo of Messina which is the city’s cathedral. Visitors should plan to get there just before midday to see the bell tower’s astronomical clock in action. This 15-minute visual display depicting the history of the city begins with three roars from a model lion and is the city’s top tourist attraction. Other churches worth a visit are the 12th century Annunziata dei Catalani and the 13th century Santa Maria degli Alemanni.

A little further afield is the Regional Museum of Messina which lies 3.5 km. north of the port. It is home to a number works by renaissance painters including Caravaggio. A nice way to get there is on the local tramway which runs up the coast from immediately outside the port area.

Located 55 km. along the coast to the south of Messina is the historic resort town of Taormina whose origins can be traced back to the 4th century BC. Located on a clifftop overlooking the Ionian Sea with Mount Etna in the background this is a stunningly beautiful place which is the most popular excursion for cruise ship passengers. Whilst day trippers head there to see its remarkably well-preserved Greek theatre the town has long served as an upmarket holiday destination for international celebrities. Taormina appeared on the world stage in 2017 when it hosted the G7 summit. 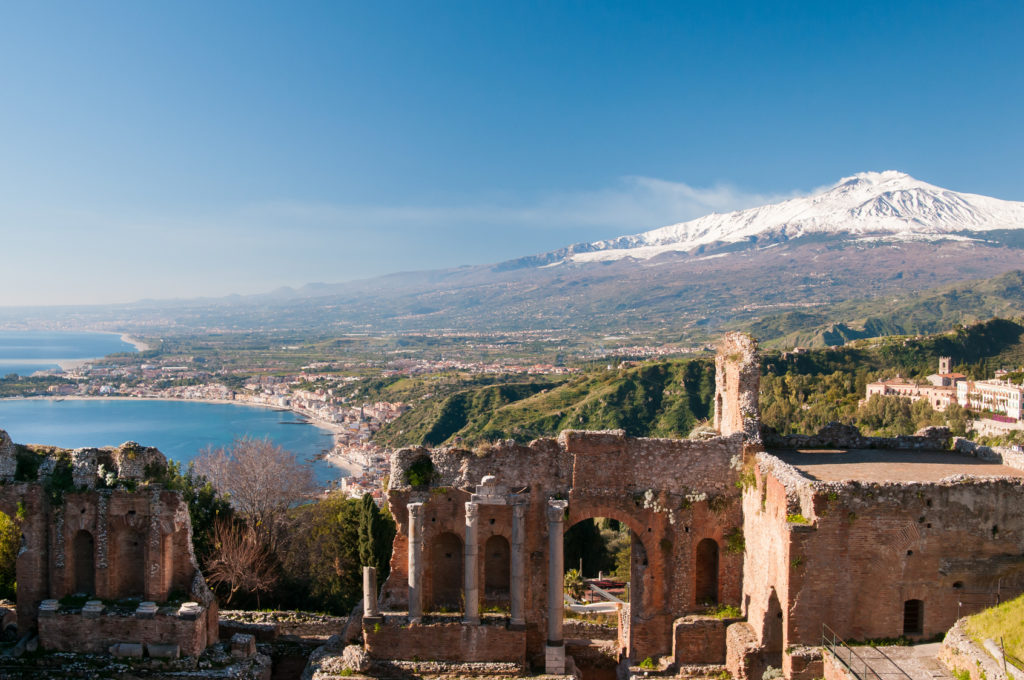 Insider Tip: Be sure to try a ‘granita’ when in Taormina. This is the Sicilian version of mainland Italy’s ‘gelato’. Every cafes in town sells them in a choice of flavours.

Getting There: Some cruise lines offer shore excursions to Taormina and other villages including Savoca where scenes from The Godfather movies were shot. Others transfer visitors to the Cratere Silvestri on the slopes of Mount Etna before visiting Taormina on the way back to Messina. Alternatively, you can get there by public transport. Simply take a train from Messina Centrale on Piazza della Republica to Taormina-Giardini then take a local bus or taxi into the town centre. There are also direct buses (Interbus) from near the train station which run directly into the centre of Taormina. Taxis are available from the port and although a lot more expensive than public transport can still prove to be a convenient option when shared amongst several passengers. 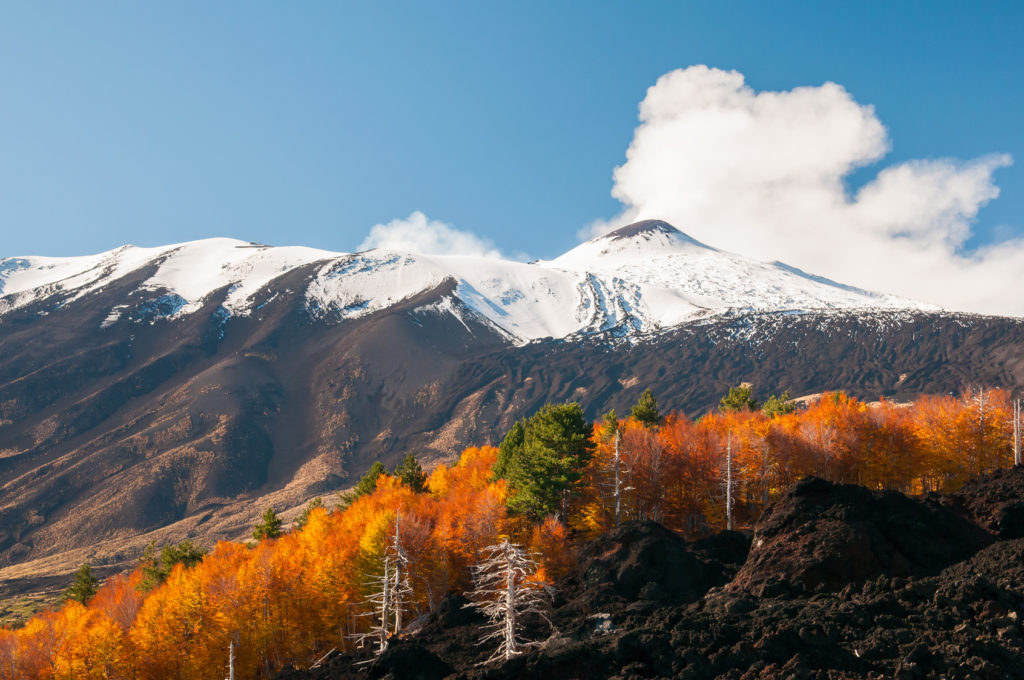 Mount Etna is Europe’s largest and most active volcano which lies 100 km. (and almost a 2-hour drive) from Messina. Official excursions or taxi tours from the port generally head for Rifugio Sapienza on the southern slopes which serves as the main base camp for activities on Mount Etna. From here visitors can take a cable car up the mountain then a jeep up to the crater or arrange to take guided walks on the volcano. Taking public transport to Mount Etna from the port is not an option due to the limited time available so passengers are strongly advised to consider taking excursions offered by the cruise line.