Someone once described Italy as a layer cake: since prehistory, people have been building whole civilisations there, and when they fell, the next inhabitants carried right on over the top of them. Nowhere is this more true than in the mad, chaotic, glorious maelstrom that is Naples.

Today’s snapshot – which is all any blog post about this tangled and ancient labyrinth can be – will focus on the incredible world below the feet of Neapolitans. There’s as much going on under the streets as there is on them.

Our first stop is easy enough to find, but no less special for it. The Dante Metro Station is located by the Piazza Dante, which on warm nights is Naples’ games room, restaurant, nightclub, crèche and dating site. It’s dominated by a nineteenth-century statue of Dante Alighieri, Italian equivalent to Shakespeare and author of The Divine Comedy.

The pavement outside the station is volcanic stone from Mount Etna – a reminder that more may be going on beneath your feet than you realise.

Take the escalator down into the station and above you is a quotation from Dante, formed into an epic installation by contemporary artist Joseph Kosuth. Venture further in and you’ll find large works by Carlo Alfano and Jannis Kounellis, alongside dozens of other pieces that change frequently. There’s something for every taste.

Top Tip: A ten-minute walk from here will take you to the Museo Cappella Sansevero – an ideal destination if you’re an art lover. The marble in this museum make it one of the finest in all of Italy. 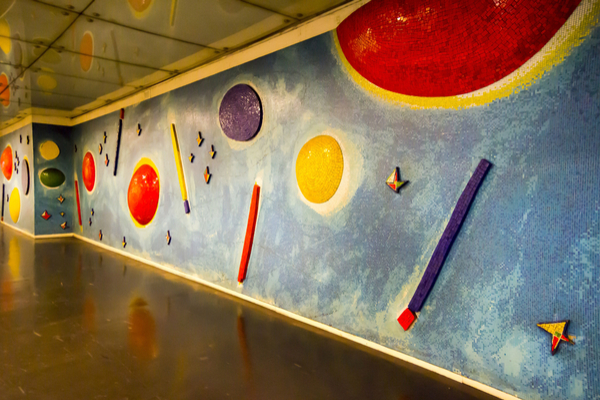 Now that we’ve got our senses attuned to the dark, let’s move on. The next underground treasure is trickier to detect – but more than rewards the search.  Nowhere are the various stages of Naples’ history laid bare quite as they are here.

Greek, Roman and Medieval Come Together

You’ll need a guide for this one, as from ground level, it’s impossible to pick out. The ancient Greek city of Neapolis was taken over by the Romans, who either continued using their sites or built right over the top of them. The tradition continued into medieval times – the twelfth-century church of San Lorenzo Maggiore was built amid the ruins of the Greek agora, or marketplace.

Here you can see the remains of bakeries, laundries and stalls, all clearly discernible in the bricks and stones. An intimate hush fills the place, quite a difference from the bustle and rubble of Pompeii.

Top Tip: The tours are self-guided, so take your time and explore at your own pace. Currently included in the price is a visit to the church museum, which houses many objects recovered from the marketplace. And plenty of plaques. Everyone loves a plaque. 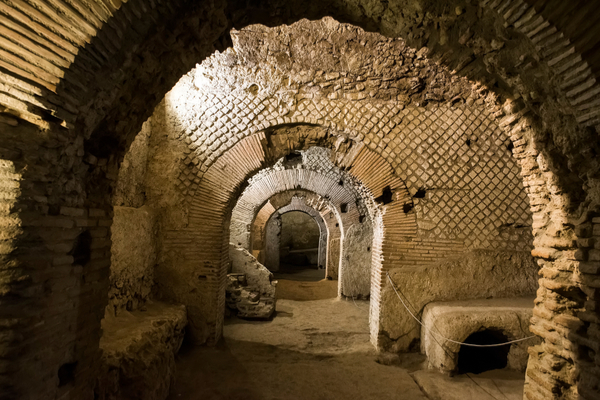 Heard of him? Me neither. But this fifth-century North African saint started something of a trend among subsequent Neapolitan nobles: he and several other African exiles were buried in the caves under what is the Sanità District today.

The structures were reopened in the sixteenth century by the Dominican Order whose basilica was across the street. Underground, they practised a (frankly creepy) form of body preservation – draining the body, and plastering all but the head into the cave wall. Incredibly, it became de rigueur among the city’s greats around 150 years ago.

Today, all that remains is a handful of some of the most bizarre funerary memorials you’ll find anywhere in the world. Some striking early examples of Christian art are also visible here – the loaves, fishes, grapes and depictions of the Apostles are impossible to miss.

Top Tip: You’ll also want to visit the monks’ basilica of Santa Maria della Sanità if you can, where some more fascinating materials from the catacombs are now housed. 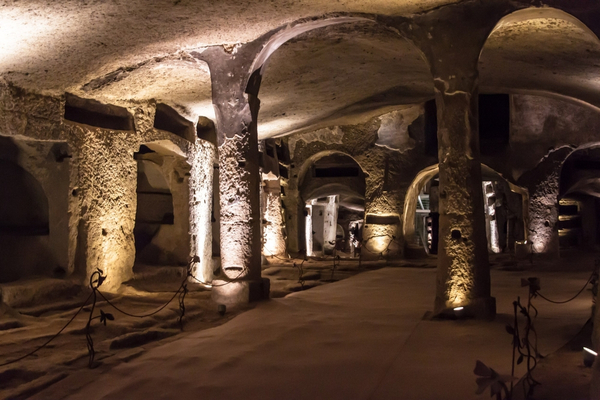 These catacombs are another impressive and cavernous space under the city, and are full of early Christian art, frescos and paintings. Three tiers of varying opulence can be seen in the tombs’ design, ranging from the ornately painted cubiculum to the austere forme.

Further ahead, in the basilica minore, are the tombs of the catacombs’ namesake Saint Gennaro and the remains of a fresco of Naples’ first bishop, Sant’Aspreno.

Top Tip: There’s a great museum atop the Capodimonte Observatory round the corner.

Hostel of the Sun – This simple, quirky and dynamic hostel is in the heart of the action – and they’re known for their great pizza recommendations!

Serendipity B&B – Brilliant bang for your buck here, and beautiful to boot. The B&B itself is Insta-fodder aplenty, and having the Old Town on your doorstep means this can be your own little bolthole from all the hustle and bustle outside. 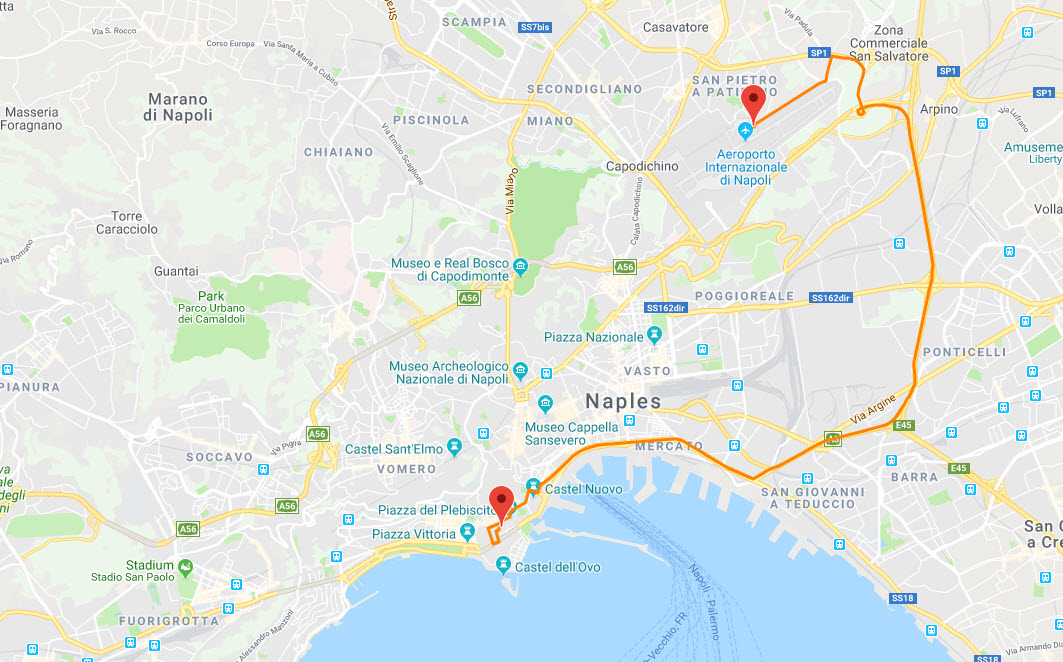 Naples Airport (NAP) is a well-served hub around two and a half hours from London, with seven airlines running over seventy flights a week.

You’ll have no trouble getting here – but negotiating Naples’ traffic is another matter. The seven-kilometre trek is much better taken care of by a professional. And I found Shuttle Direct the best mix of service, convenience and keen price.

With over 40 years of experience, (often) local drivers across Europe and North Africa and the best in professional, friendly service, we make sure Shuttle Direct is the only choice to get your holiday moving.