Fact: the capital of Spain is often overlooked by tourists. While Spain is one of the most visited countries in the world (only surpassed by France and the U.S.), the truth is that most of you will rather be heading to the beaches of Benidorm, Mallorca, Marbella or Tenerife… in pursuit of a holiday in the sun. For those who are looking for a city break, perhaps seeking a more cultural experience, Barcelona almost always wins. It is undeniably the most popular city to visit in Spain, evidenced by the staggering numbers of flip-flop clad tourists armed with selfie-sticks all over the place.

Now don’t get me wrong. I love Barcelona for so many reasons, like its modernist architecture, designer restaurants, beach bars… and even more for its laid-back, uber cool style. If you have never been there, you are missing out big time. However, Barcelona is and is not Spain. It has its own unique identity (and language), and is fiercely proud of being different. Saving the obvious differences, Catalonia is to Spain what Hong Kong is to China, Quebec is to Canada or Scotland is to the UK.

For a taste of the real Spain, you must go to Madrid. Why Madrid you ask? Well because this city encapsulates Spain more than any other. Just think of the first classic stereotypes that come to mind. Flamenco. Check. Bullfighting. Check. Tapas. Check. Sangria. Check. Very late nights. Check. Madrid has them all.

We are in 2017 though, and it would be unfair to think solely in those terms. Madrid is also where you will find the best example of the country’s impressive change and development of the last thirty years. Not only is it the seat of government, but it is also the pulsating heart of the economy. The country’s biggest corporations such as Iberia, Repsol, Santander or Telefónica are all based there. The Cuatro Torres business area has skyscrapers that would not look out of place in Dubai or New York. The city has attracted talent from all over Spain and beyond for many years. It is often said that if you live in Madrid, you are from Madrid, denoting the city’s ability to embrace anyone no matter who they are or where they came from. Indeed, the city hosts Europe’s largest LGBT pride event each year. Also, migrant communities from countries such as Argentina, Colombia, Romania, Morocco or Philippines have added a new dimension to the Spanish capital with colourful new shops, restaurants and much more.

How to get to Madrid

Most low cost flights operate in and out of Terminal 1 (T1) at Barajas Airport (MAD), which is about 5 minutes closer to the centre than the more recently built T4, used by flag carrier Iberia and the majority of long haul airlines. 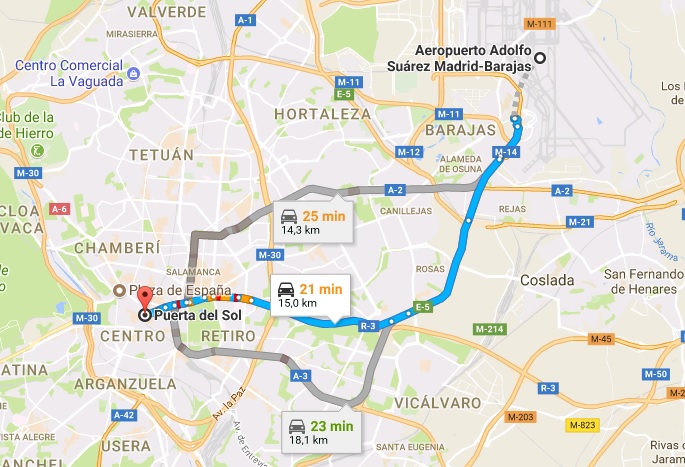 The airport is just 13km (8mi) from Puerta del Sol. While there is a metro line and a 24h bus available, by far the best way to travel to the centre is with one of Shuttle Direct’s transfer services. A driver will meet and greet you at the airport, and then drive comfortably to your final destination as quickly as possible.

There is no shortage of hotels in Madrid, but early booking is advisable, particularly if you are planning on going there in the spring-summer months.

My favourite place to stay is Hotel Orfila. Centrally located close to Alonso Martinez square, this elegant hotel oozes charm from a bygone era. You will fall in love with their beautiful terraced garden, where you can enjoy an afternoon tea or indulge in a luxurious meal if you prefer. It is just a perfect oasis of tranquillity to wind down at the end of the day after a busy day exploring the city. The staff is probably their best asset though. Friendly and willing to go out of their way to help you with every detail.

Start at Puerta del Sol. This is the epicentre of Madrid, and indeed Spain. It marks the Km 0 from which all roads are measured. It is where the regional government has its headquarters and where the country celebrates the passing of each year on the 31st of December. Also watch out for the Oso y Madroño statue (bear and arbutus tree), the symbol of the city.

In the nearby Gran Via area, crowds gather to go shopping, eating, drinking… it also acts as a sort of Broadway, as there are several venues with musical shows, stand-up comedy etc. 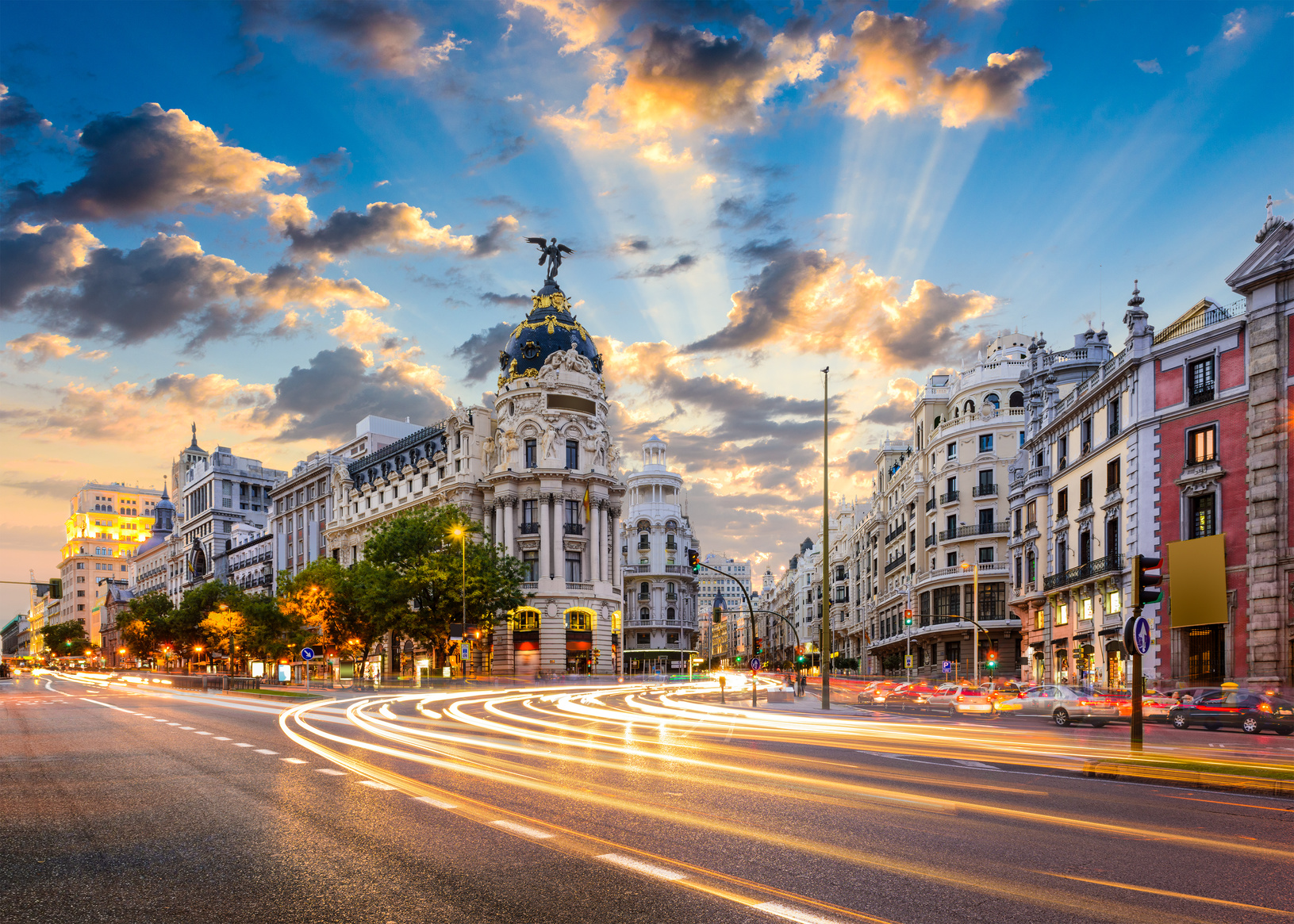 After all that bustle, why not head for a relaxing walk in the Parque del Buen Retiro, Madrid’s biggest park? Or better still, have a picnic there followed by an afternoon siesta.

A stone’s throw away from the park, is the golden triangle of museums, comprising the Prado, the Reina Sofia and the Thyssen-Bornemisza. Visit all three if you can. The Prado is the most popular of the three, and boasts some of the best art from the XVII and XVIII centuries, including masterpieces from Goya and Velázquez. Reina Sofia is geared towards contemporary art, and includes arguably Picasso’s most famous painting: Guernica. While Thyssen-Bornemisza is an extraordinary private collection of European art ranging from the XIII to XX centuries, and including names such as Dali, Monet, Rembrandt, Sorolla or Modigliani.

No visit to Madrid would be complete without a stroll in the Rastro, Madrid’s famous flea market that takes place every Sunday morning. Popular with both locals and tourists, it is located between Embajadores street and Ronda de Toledo. You will find all sorts of antiquities and more. Turn up early if you can as it does get very busy. 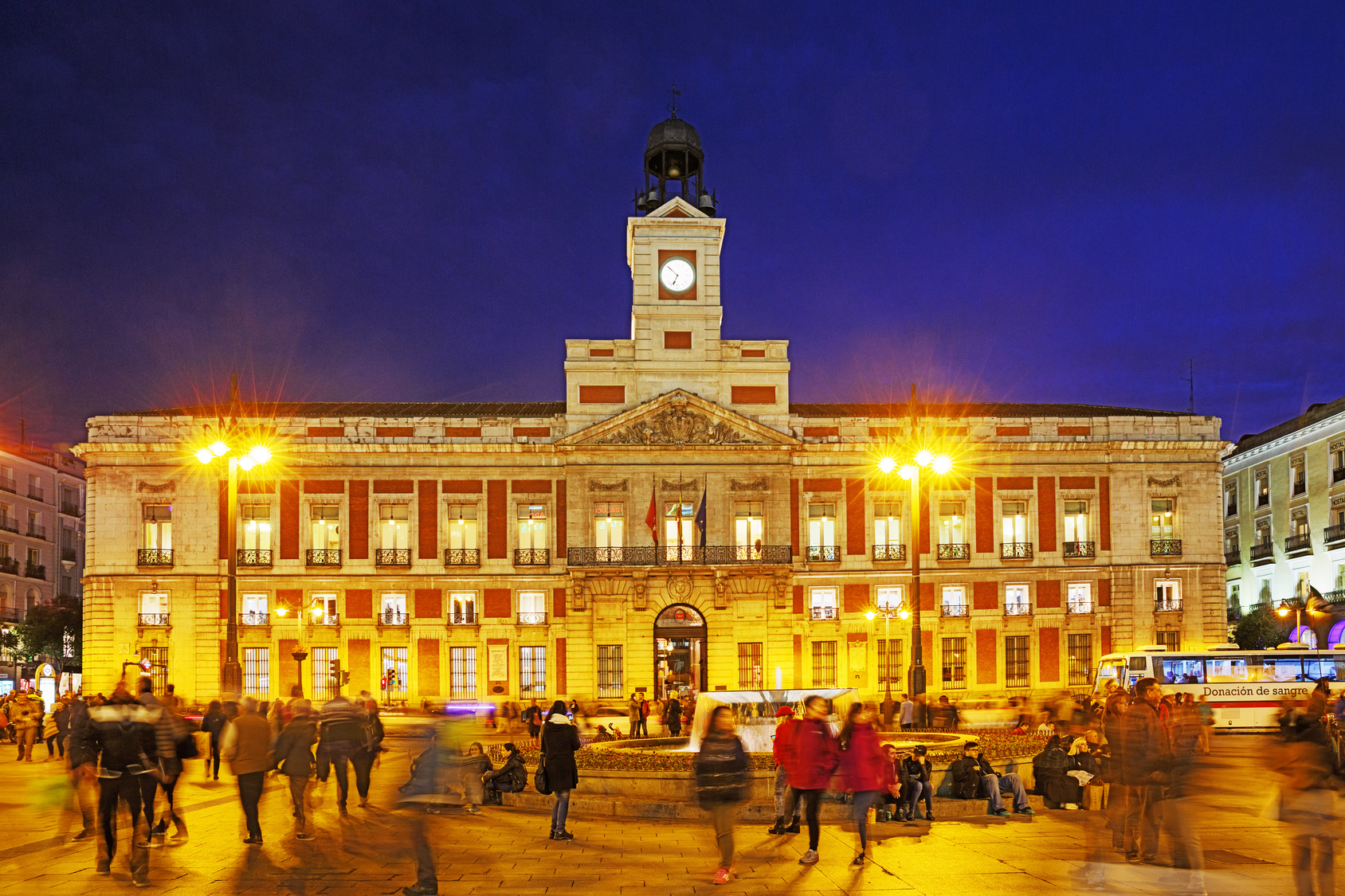 And if you want to get away from it all, why not consider a day trip to Toledo, Spain’s ancient capital. A UNESCO world heritage site, it is nicknamed the city of three cultures for its historical co-existence between Muslims, Jews and Christians.

It is worth noting that Madrid is the perfect starting place for anyone intending to tour Spain. Cities like Barcelona, Seville, Valencia or Valladolid are within easy reach thanks the high-speed rail network, commonly known as AVE. And places like Bilbao, Ibiza or Lisbon are just a 1h flight away.

One of the best things about Madrid is the massive tapas culture. Walk into any bar, and order a caña (small beer). It will always come with a snack, and the more upmarket the place, the more sophisticated the taps get. Indeed, you could even end up having a whole meal by just ordering a few beers.

Two markets stand out above the rest in terms of popularity. They are the Mercado San Miguel and the Mercado San Antón. You will be able to sample all sorts of Spanish delicacies such as Ibérico ham, croquetas or stuffed olives. If you want to visit a less crowded market, try the equally good but smaller Mercado de La Paz in the chic Salamanca neighbourhood. 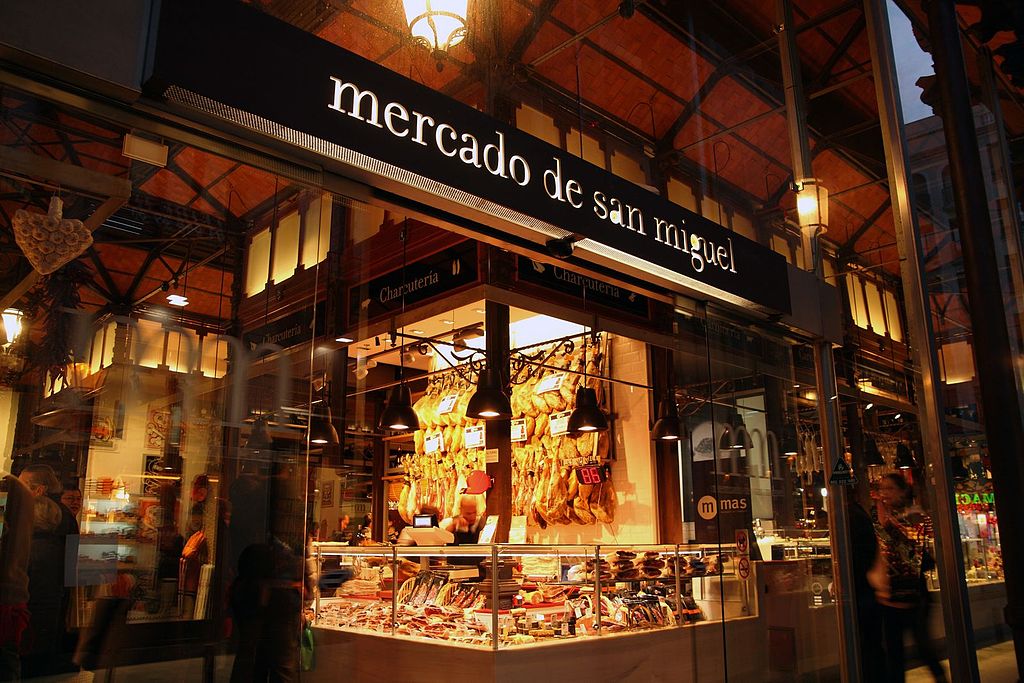 It is difficult to point out a single restaurant in a city with so much culinary talent. Instead I would recommend heading to the area east of the Retiro park, nearest metro is Ibiza. There are at 40 different restaurants where you will find some of the best tapas in the city, as well as specialities from regions such as Asturias or the Basque country. Just walk into one, have a drink, and check out the food. You can go tapas hopping from one to the next.

If you would like to sample some of the foreign cuisines represented in the city, you can head to Yatai Market, an indoor Asian street food market. It is tiny though and gets crowded very easily. Visit the working class areas of Usera or Tetuán, where you can sample authentic Bolivian, Chinese, Peruvian restaurants and much more.

It is no secret that Madrid has the liveliest nightlife in Europe, and possibly the world. There is something for everyone here. From sweaty Flamenco joints to swanky nightclub venues, salsa dancing and clandestine bars. Most of the action takes place around Sol, La Latina or Chueca. 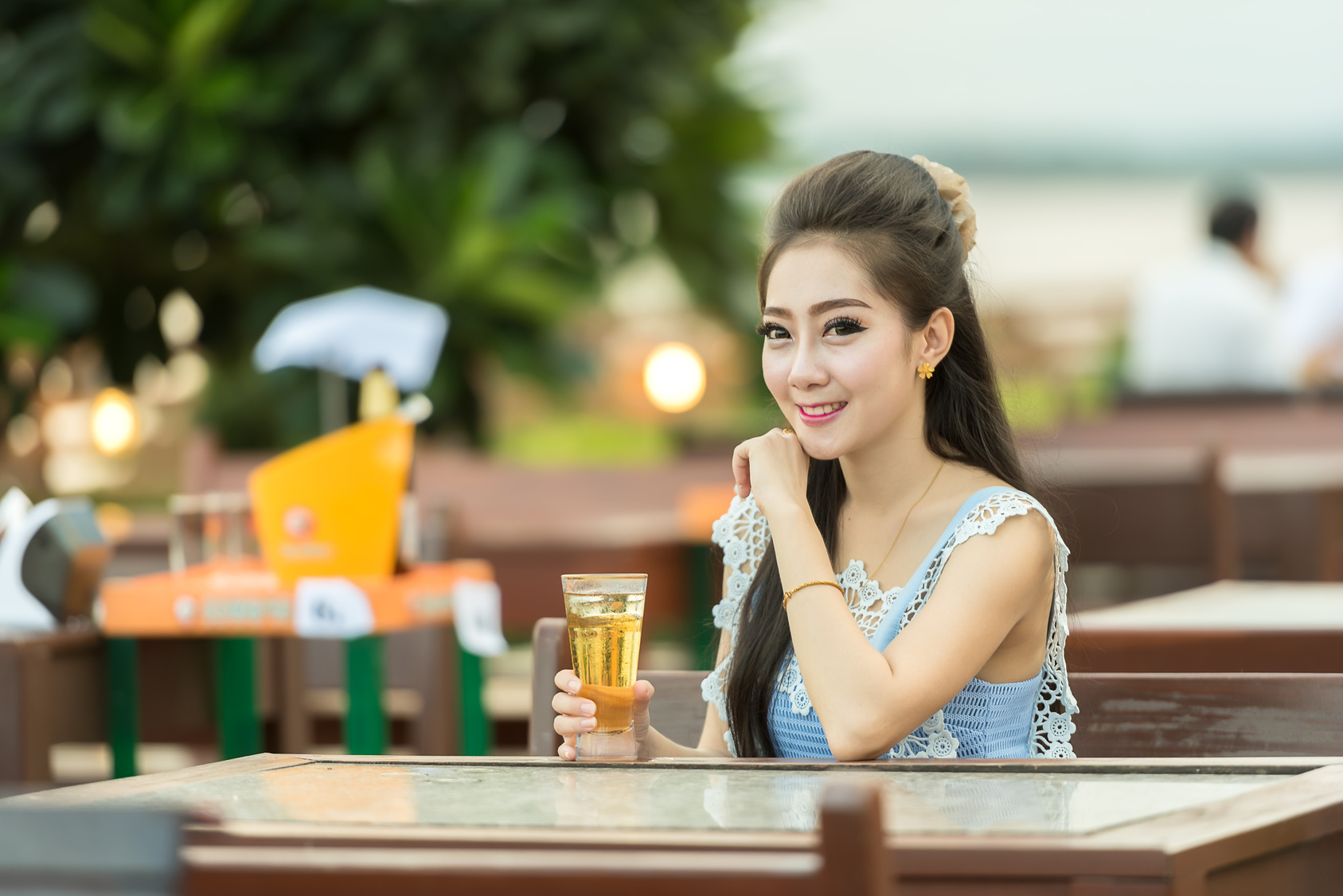 In summer, the best way to start the night is by going to a terrazas or roof top terraces. They are extremely popular though so they can get very busy. The ones that stand out to me are the bohemian El Viajero and The Hat in La Latina area, The Principal Hotel on Gran Via for the best view of the city hands down, and Hotel Urban for the widest selection of cocktails.