One of the first things a veteran Paris visitor will tell a rookie holidaymaker is this: when you arrive, avoid taking a taxi that you haven’t pre-booked from a Paris airport into the city at all costs. Although there are many honest cabbies simply making a living, look in any online forum or traveller’s blog and you’ll discover there are more than a handful of bad apples.

From ripping tourists off by circling around random roads needlessly, to only accepting cash despite totals that often reach €100 and being downright rude, airport taxi drivers hailed off the street in Paris don’t have the best reputation. Although there are some alternative options, such as taking the bus between Orly and the capital or booking a dependable Charles de Gaulle airport shuttle in advance, the French government has recently intervened, in order to ensure that taxi services should be a lot fairer from 2016 onwards.

Dreaded by both locals travelling abroad and tourists on their way back to the airport to fly home, Parisian taxis’ call-out fees are widely regarded as not just an inconvenience, but also a way to make an already pricey journey even more prohibitively expensive. From early 2016, however, call-out fees will be fixed, with the amount differing only between immediate or advance bookings.

Moreover, from 1 March 2016, fixed fares will be introduced for non pre-booked taxis, making the journey between Paris and its airports and vice versa. Four different fares have been set out: Charles de Gaulle airport to anywhere on the Left Bank will be €55 and anywhere on the Right Bank €50; Orly airport to the Left Bank and Right Bank will be €30 and €35 respectively.

How Have Taxi Drivers Reacted to the News?

As predicted, not very well! Many Parisian taxi drivers are protesting that competitors such as Uber or pre-booked Orly or Charles de Gaulle airport shuttles will easily undercut them on price. Additionally, they argue that the fixed rates could actually put the customer at a disadvantage in certain cases where the fare may be higher than the meter would have been.

Furthermore, some taxi drivers claim that the government’s guidelines are too vague and don’t account for the obvious discrepancy in the length of journeys between the airports and various parts of Paris (the left and right banks of the Seine), or the duration of the journey at different times of day, since fixed fares apply to public holidays, weekends and rush hour as well.

Protests have been held outside the offices of the General Directorate of Competition, Consumption and Repression of Frauds (DGCCRF), and flyers are being distributed to help people understand their opposition to the new regulations.

So What Does This Mean for Travellers?

The above regulations, together with the opening of lanes reserved for public transport and taxis on both the A1 and the A6 motorways (which will inevitably cut down travel time between Paris and its airports), will definitely make it harder for unscrupulous taxi operators to take advantage of naïve visitors.

However, it’s still clear there are plenty of benefits to be gained from using alternative services. Whether you’re landing at Orly or Charles de Gaulle, airport shuttle services that are pre-booked are a great way of avoiding last-minute nuisances, such as queuing for a taxi or worrying about whether you have enough euros on you to pay for it. There’s also the obvious advantage of getting a personalised service.

Alternatively, while public transport may take a fair bit longer and leave you a few minutes’ walk from your hotel, some budget travellers do find its low-cost attractive. Ultimately, it comes down to each individual to weigh up the pros and cons of each service and choose the best option for them. 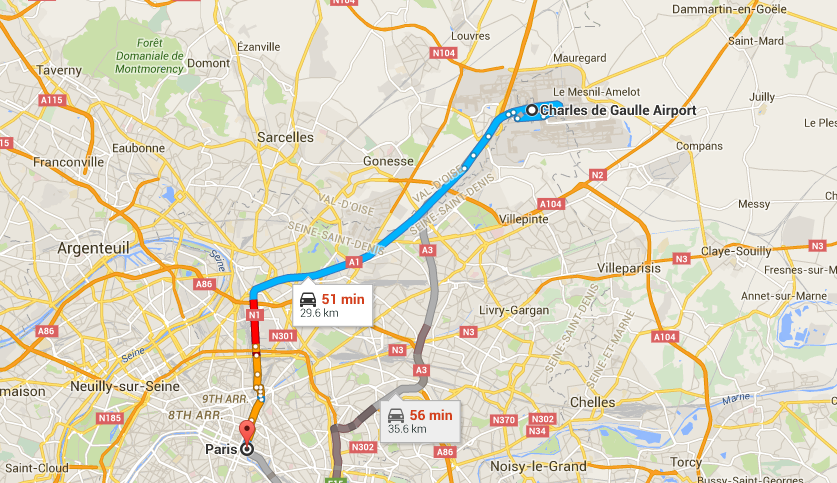 Lukas Johannes is a driver for Shuttle Direct. If you’re looking for a Charles de Gaulle airport shuttle, Shuttle Direct provide pre-booked shuttles to major destinations all over Europe. Wherever you travel, Shuttle Direct can make sure that you don’t miss your car on your holiday abroad.