The Portes du Soleil offers an absolutely huge ski area with 12 linked resorts covering two countries. On the Swiss side there are the resorts of Champéry, Les Crosets & Champoussin, Morgins, Torgon . Whilst on the French side there is Abondance, Avoriaz, Châtel, La Chapelle d’Abondance, Les Gets, Montriond, Morzine-Avoriaz, St Jean d’Aulps.

Even though the area has a huge coverage with so many linked resorts the mountains have kept some of the most beautiful and unspoilt terrain in Europe. From spruce covered forests to extensive snow covered meadows the area has kept its natural beauty and is simply stunning.

The linked resorts offer unlimited skiing potential with a full circuit of the area possible in one day, but with not much time to stop if you want to make the last ski lift back.

This year the Portes du Soleil is celebrating 50 years of skiing. Its more humble beginnings date back to the 1950’s when French and Swiss farming villages developed into the early ski resorts around the Abondance, Aulps & Illiez valleys. The Portes du Soleil as a linked resort was first unveiled at the 1964 Lausanne Ski Exposition. This caused a huge amount of interest in the media at the time, being the first internationally linked ski area.

To celebrate this anniversary there are a number of events and challenges taking place throughout the season. The main event is on 17th January, with a massive party at the Col des Portes du Soleil (1950m). The challenges involve skiing or snowboarding to find markers dotted all over the ski area. The first prize is a ski holiday for the 2015-16 season!

The Portes du Soleil in numbers:

Getting to the Portes du Soleil

The Portes du Soleil covers the borders of both France and Switzerland, with Lake Geneva to the west and Mont Blanc to the east. This puts all the resorts within easy reach of Geneva International Airport (GVA) in Switzerland. Geneva Airport services almost 400 flights per day and is the hub for winter holiday makers entering the French and Southern Swiss Alps. For this reason most major European cities will fly a service into Geneva with smaller operators opening winter specific routes into Geneva starting around mid-December. All destinations in the Portes du Soleil can be reached in just over an hour using Shuttle Direct’s private or shuttle transfers from Geneva Airport.

By train the resort can be accessed by TGV to the French stations of Cluses and Thonon-les-bains with French railway SNCF. In Switzerland travellers can access the resorts by train to Lausanne & Montreux and Aigle with the Swiss railway CFF. From the train stations Shuttle Direct can provide private transfers to the resorts.

The scope of The Portes du Soleil is so large that we will look at resorts individually over several weeks. To begin we will take a look at the unique and custom built resort of Avoriaz, in France. 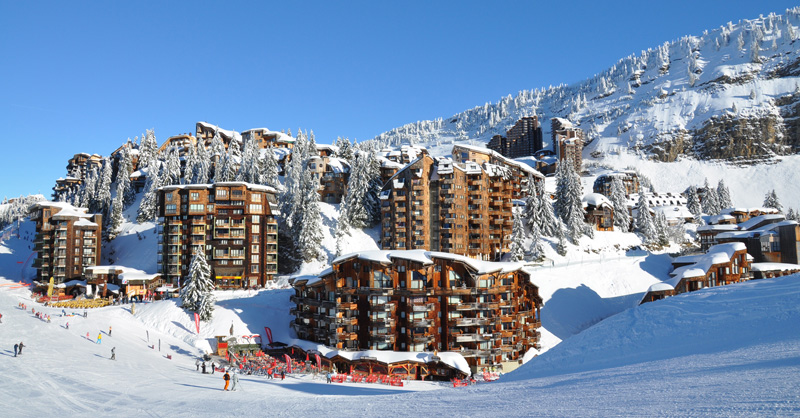 Before construction in the early 1960’s, Avoriaz was essentially high meadow land with a few chalets and barns scattered around. The meadows were used by the farming families of Morzine, who would herd their cattle up on to the mountain for grazing during the summer. They would then retreat back to the lower valleys in the late autumn before the onslaught of snow.

In 1960 Vuarnet became a French hero when he won the men’s downhill skiing at the winter Olympics in Squaw Valley in California. After returning from his victory, he became the director tasked with transforming Avoriaz into a ski resort. Together with his business partners, Gerard Bremont and Jacques Labro, Vuarnet began creating an infrastructure and generating interest in the resort.

The Nyon cable car and the Avoriaz cable car were completed by 1961; the Prodains cable car was swift to follow in 1963. By Christmas 1966 the resort was welcoming its first winter guests.

Avoriaz drew much criticism at the time of construction for its status as a unique car-free resort. Ecological issues were not high on the agenda in the early 1960’s. Guests driving to the resort leave their cars in the main parking area and then proceed to the accommodation by horse drawn sleighs. This leaves the resort completely free of traffic and allows holiday makers to leave and return to their accommodation by ski or snowboard and children to sledge and play in safety. 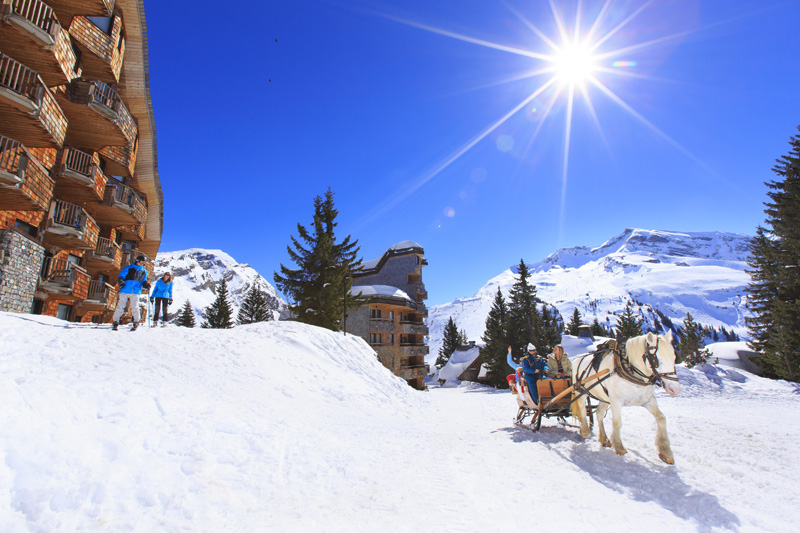 In 2003 Avoriaz was awarded a prize by the Minister of Culture for being one of the great heritage achievements of the 20th century.

Avoriaz was voted Best Family Resort 2013 at the World Snow Awards in London.

There are a variety of accommodation options in Avoriaz from all inclusive holidays and luxury hotels to private apartment rentals from owners. This provides a great deal of choice for all budget types and group sizes. By design, wherever you stay in Avoriaz means you only have to step outside your accommodation and you will be straight onto the snow. You can find a full list on the Avoriaz web site.

A 4-star hotel, the Hotel des Dromonts- Avoriaz is a legendary address. This iconic hotel was the first to be built in Avoriaz in 1964 and hosted the Festival International du Film Fantastique d’Avoriaz. The hotel has recently been acquired by Maisons & Hotels Sibuet. The exterior is clad with tavaillon wood tiles characteristic of the resort. Featuring refreshing colours and slabs of slate, the Hôtel des Dromonts combines contemporary comfort with an emphatic nod to the warm, rounded and bright-and-breezy atmosphere of the Sixties. 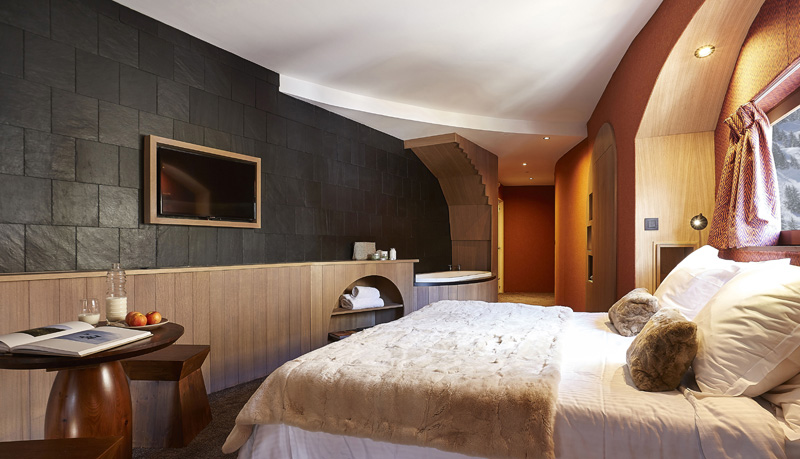 Avoriaz has a huge amount to offer for all levels of skier and snowboarder and for all age groups. This high altitude resort has open pistes, forest routes and wide open valleys. Avoriaz averages 8 metres of snow every winter which gives almost guaranteed snow coverage from December to April.

This convenient location gives easy access to the whole Portes du Soleil, including Morzine, and the Plaine Dranse area leading to Chatel in France. Across the Chavanette or Mossette you cross the border into Switzerland with the resorts of Les Crosets and Champery.

If you are a first time skier or snowboarder, there are nursery slopes suitable for beginners and a variety of well-established ski schools providing lessons.

For intermediate skiers and boarders, the area offers more than enough variety to fill your whole week with different pistes or off-piste areas each day.

For the more experienced, one of the most famous runs around Avoriaz is over at the Chavanette sector where you will find the ‘Swiss Wall’. This mogul run has a tricky and steep top section, which then descends into a mogul field. After the top section, the mogul field is fairly straight forward, although it can become rather hazardous when icy. There are also some excellent black runs and moguls in the Hauts Forts area, including the Coupe de Monde black run which has been used in World Cup Downhill racing.

Outside of the main snow sports, there are a great deal of other things to do in Avoriaz. A recent investment in a huge indoor water park, Aquariaz, means that you can relax in what is described as an “aquatic paradise in the mountains featuring lush vegetation and rocks”. This unique water park in the mountains offers a river with a variable gentle current, a slidewinder (a kind of aquatic halfpipe), a water playhouse, a paddling pool, a large pool with climbing walls, massage benches and an open air spa heated to 34 degrees.

In addition to this there is also dog sledding, horse-drawn sleigh rides, Nordic walking, snowshoe walking, night sledding, ski Joering, speed riding, paragliding and even scuba Diving under the ice!

As a purpose built ski resort, Avoriaz offers a superb ski-in ski-out location with a unique look which blends in with the surrounding mountains. Coming up the next few weeks, discover the other town and village resorts that form the vast and beautiful Portes du Soleil ski domain.