The south coast of Portugal stretches for more than 150 km from Cape St. Vincent in the west towards the border with Spain in the east. It is home to a spectacular coastline of golden beaches and many remarkable rock formations. Its mild year-round climate and excellent tourism infrastructure attracts over seven million tourists to its shores every year with most of them arriving through the airport of Faro on the east coast. The region is particularly popular with golfers thanks to more than 25 top-class courses which make the Algarve one of Europe’s top destinations for golfing holidays.

Cruise ships visiting the Algarve dock at the Port of Portimão which lies close to the popular resort of Praia da Rocha, just an overnight sail from Lisbon. The town has a long history of shipbuilding and fishing dating back to Phoenician times. Today it continues its role as an important fishing port whilst welcoming tourists to its lively waterfront which is home to an attractive row of terrace bars and seafood restaurants. Whilst relatively unknown on cruise itineraries, a day in Portimão and its environs will prove most enjoyable for passengers. 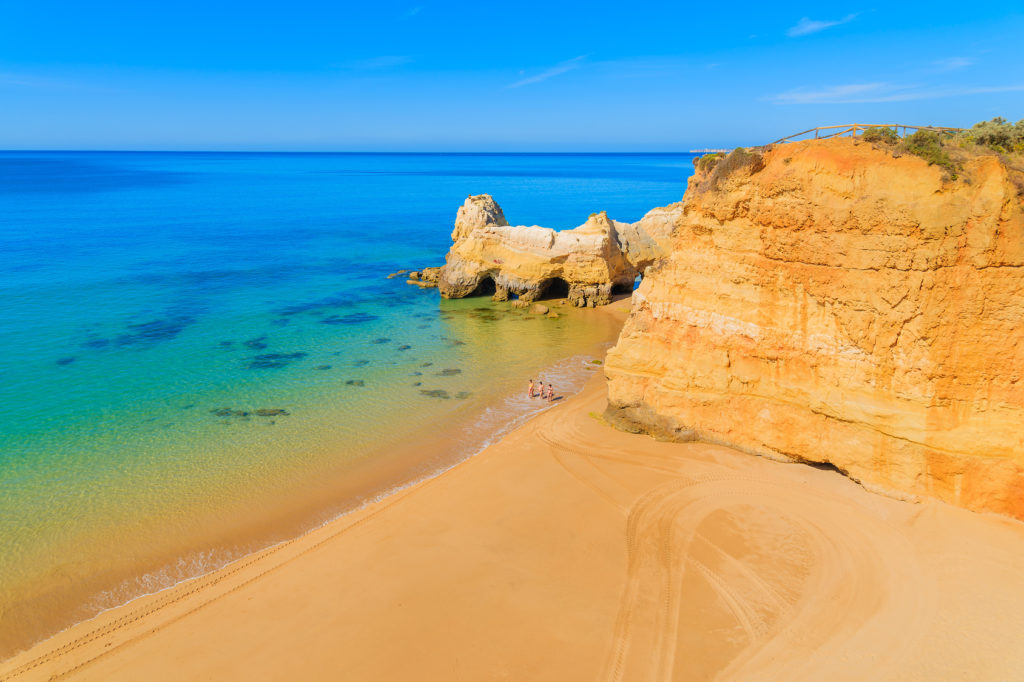 Cruise ships visiting the Port of Portimão sail a short distance up the Arade River beyond the spectacular cliffs of Praia da Rocha then dock at the cruise terminal. Some larger vessels anchor just offshore and passengers are transported to the dock by tender. From the modern cruise terminal at the port it’s a pleasant 1.5 km walk into the centre of Portimão. Shuttle buses and taxis are also available.

Transport from Faro Airport to Portimão

If your cruise begins or ends in Portimão you’ll most likely be travelling through Faro Airport which lies 4km west of the town of Faro on the eastern Algarve. The summer months see a huge volume of traffic at the airport with services to and from cities all over Europe. Budget airlines including Ryanair and easyJet account for much of this traffic.

Portimão lies 70 km west of the airport and is accessible by airport bus and train. Neither of these options is particularly convenient for cruise ship passengers as both require transport via the city of Faro. A far better option is to travel by taxi or book a private transfer from Faro Airport to (or from) the Port of Portimão with Shuttle Direct. This airport transfer specialist can provide transport from the airport to all destinations along the Algarve.

In Portimão: If you’ve just arrived on an overnight voyage from Lisbon after a hectic day’s sightseeing in the Portuguese capital you’ll be delighted to spend a few relaxing hours in the delightful port of Portimão. Located on the River Arade in the centre of the Algarve this former fishing village is the region’s second biggest town which is home to a charming old centre. The main attractions to look out for include the Portimão Museum (Rua D. Carlos I) which you’ll come across if you walk into town from the cruise terminal. Built in what used to be a sardine canning factory this interesting museum is dedicated to the history of the region. On a hill overlooking the old town you should look out for the Church of Our Lady of Conception which is the town’s main religious sight.

Insider Tip: Portimão is well known for its excellent seafood, most notably the fresh sardines which are barbecued on a skewer. Grab a seat at one of the open-air restaurants on the harbour and savour this local delicacy. 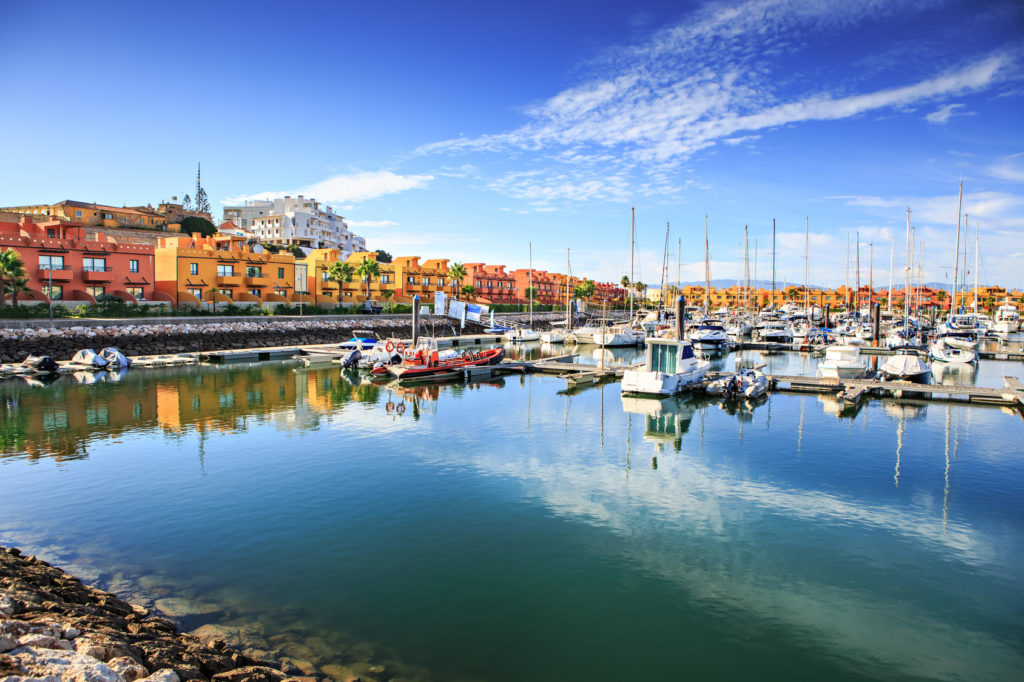 Near Portimão: Just across the river is a small fishing village called Ferragudo which can be visited by water taxi from the waterfront in Portimão. Whilst its main attraction is the Fort of St John of Arade, which was formerly a defence against pirate attacks, many visitors simply head across for a seafood lunch overlooking the estuary. Another destination accessible by water taxi is Praia da Rocha which is only 3km south of the cruise port. This resort is home to some of the Algarve’s finest beaches which lie below its sandstone cliffs. Passengers can also walk there or hop on a local bus from outside the petrol station on Avenida Guanaré next to the river. Another popular pastime (weather permitting) is to take a boat trip on the Santa Bernarda Pirate Ship from the Cais Vasco da Gama pier.

Insider Tip: If you want to buy some gifts whilst visiting Portimão you should head for the craft shops in the old town around Rua Vasco da Gama. These shops sell an interesting selection of locally produced handicrafts including leather items and finely painted ceramics which are particular to this area. 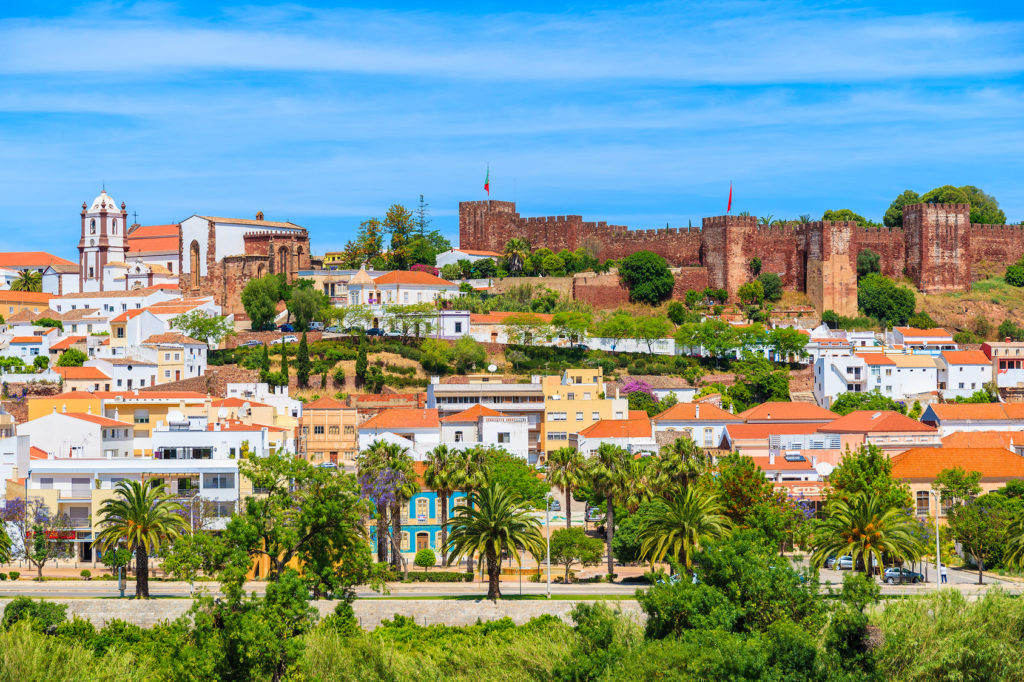 Shore Excursions: A little further afield is the charming town of Silves which lies upriver from Portimão and is best-known for its Moorish castle. Cruise ship passengers can get there by taxi from the cruise terminal or on a public bus. There are also some river cruises from the port which sail up the Arade River but their departure times vary according to tidal conditions. Your cruise line will most likely offer a selection of additional shore excursions to more distant destinations such as Cape St. Vincentjust beyond Sagres. This is the most westerly point in mainland Europe and was believed to be the ‘end of the world’ until the 14th century. Views out to sea from this windswept outpost are quite spectacular.

One Night in Portimão

If your ship is spending an overnight in Portimão you should head for one of the riverside restaurants in the town centre or take a water taxi across the estuary to Ferragudo where you can watch the sunset from one of the restaurants overlooking the river. Borda Do Cais (Rua Infante Santo 75) is highly recommended for both seafood and meat dishes. If you don’t mind taking a taxi you could head down to Praia da Rocha where you’ll find a much greater choice of places to eat. For fine dining in an old world environment take a look at the Titanic Restaurant (Rua Engenheiro Francisco Bivar) under the Columbia Hotel which is a long established favourite in this resort.