On many Baltic cruises you will visit some of the capital cities of Scandinavia and fall in love with the charming, historic capitals of Estonia and Latvia. But nothing will prepare you for the delights that await you as you arrive in St. Petersburg in Russia. This port city was founded by Peter the Great in 1703 and served as the nation’s capital until it was replaced by Moscow in 1918. Its role as the country’s cultural capital has never been in doubt and its historic centre is recognised as a UNESCO World Heritage Site.

The vast majority of cruise ships arrive at St. Petersburg’s Sea Facade which lies some three miles north-west of the city centre. This impressive cruise terminal has been constructed on reclaimed land at the mouth of the city’s Neva River and can accommodate several large cruise ships at the same time.

You will have to clear Russian customs on arrival which requires that you either hold a valid tourist visa or can provide evidence that you are taking a shore excursion with your cruise line or another authorized tourist organisation. Otherwise you’ll be confined to the Sea Facade Terminal which has little to offer the visitor.

Some smaller cruise ships dock at English Embankment or Lieutenant Schmidt Embankment which are further up the river and nearer the city centre.

If you happen to be joining (or leaving) your cruise ship in St. Petersburg please check with your cruise operator to confirm that you have complied with visa regulations. Pulkovo Airport lies 23 km (14 miles) south of the city centre and for your convenience it is highly recommended that you pre-arrange a private transfer to or from the cruise terminal. 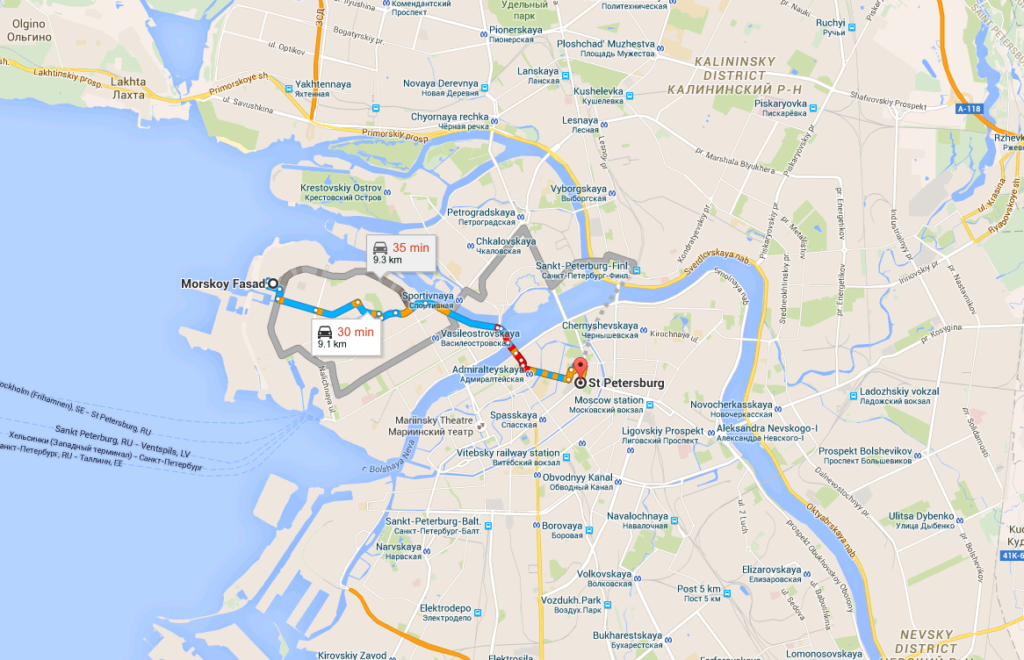 How to get from St Petersburg cruise port to city center

If your visit to St. Petersburg is for less than 72 hours you do not require a Russian visa. However, you must have documentation from your cruise company or other authorised tourist body confirming that you will be going on their shore excursions.

You will not be allowed to enter the country and visit the city alone as you can in the other Baltic cruise ports. Organising a visa in advance of your visit is an option but is hardly worthwhile considering the expense and bureaucracy involved. You cannot obtain a visa on arrival.

For this reason nearly all cruise passengers arriving here take the official tours offered by their cruise line or pre-book city tours and day excursions with an authorized local company who will provide you with the necessary documentation before travelling.

Getting Around in St. Petersburg

If you do have a Russian visa then you can get from Marine Facade into the city centre by taxi or by taking bus number 158 to Primorskaya metro station for connections into St. Peterburg. In reality, however, this option will not apply to many people arriving on cruise ships due visa regulations described earlier. Most arrivals will join their fellow passengers on official tours of the city’s main attractions, many of which are within close proximity of one another. Some cruise lines are more flexible than others by allowing you some free time during their tours rather than forcing you to remain strictly within your group at all times.

There are so many glorious buildings to see in this magnificent city that you’ll never be able to see them all during your time in port. Tours offered by different cruise companies and local tour operators will vary slightly but here are a selection of the main sights you’re likely to visit:

Hermitage Museum: This is the city’s main tourist attraction which was founded by Catherine the Great in 1764. Even if you’re not an art enthusiast you cannot fail to be impressed by museum’s setting amongst a series of historic buildings which include the majestic Winter Palace where former Russian emperors once lived. The Heritage is home to one of the world’s greatest art collections made up of literally millions of items and is the 2nd largest art museum in the world after the Louvre in Paris.

St Isaac’s Cathedral: This stunning Cathedral is one of the world’s largest which is particularly recognisable thanks to its enormous gold-plated dome which reaches over 100 metres and is a feature of the skyline of St. Petersburg. The interior is equally impressive with beautiful mosaic murals and marble floors. Time (and fitness) permitting your tour group may be allowed to climb the 300 steps which lead to the top of the dome for stunning views over the city.

Insider Tip: For a typical lunchtime snack try a ‘Blini’ (pancakes with cheese or other fillings) or a ‘Piroshki’ (baked buns stuffed with meat). These are available in many of the caféss scattered around the city centre. Russian chain restaurants such as Teremok or Stolle are also good places to pick-up cheap, traditional food whilst you’re wandering around the city. 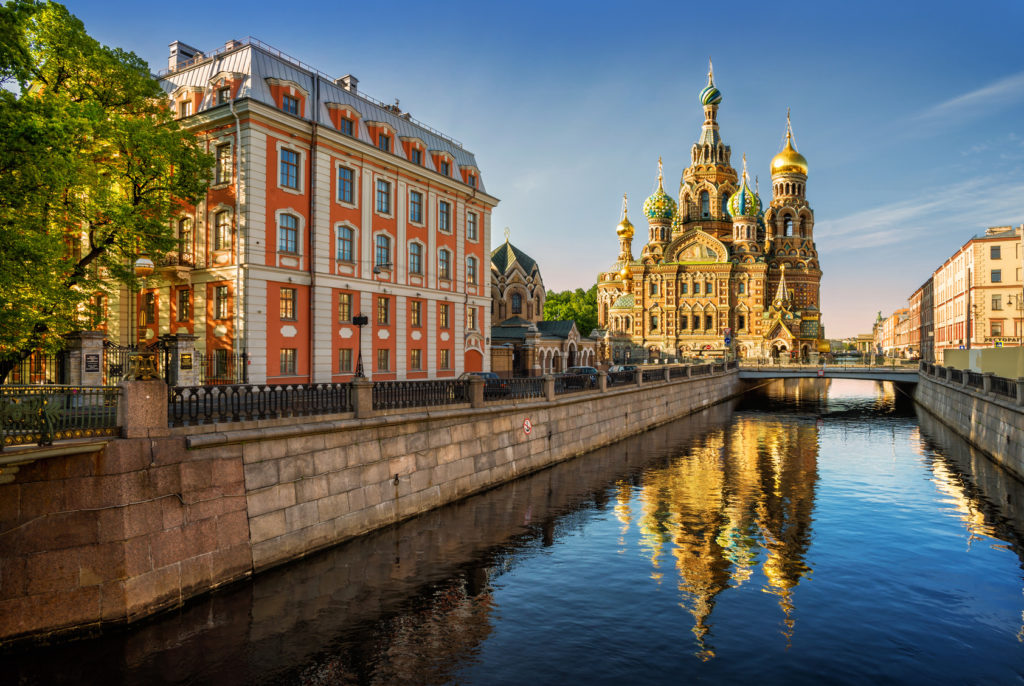 The Cathedral of Our Savior on Spilled Blood with reflection.

Peter and Paul Fortress: This site marks the origins of the city where Peter the Great began construction of a defensive fortress in 1703. It is also home to the city’s oldest Cathedral where most Russian Tsars were buried. This structure stands out because of its enormous spire which reaches more than 120 metres making it one of the city’s tallest buildings.

Yusupov Palace: This beautiful palace dating back to 1776 is best known as the site where Grigori Rasputin was murdered in 1916. The property was owned by the enormously wealthy Yusupov family until it was seized by the Bolsheviks in 1917. Today it is quite unique as few such aristocratic homes survived the October Revolution in their original state.

Savior on the Spilled Blood: This stunning church was built on the spot where Emperor Alexander II was assassinated in 1881. Much of its beauty was destroyed when the Bolsheviks went on the rampage against religious buildings but after 30 years of restoration it was returned to its former glory covered with beautiful mosaics both inside and out.

Insider Tip: Be very careful when crossing roads in Saint Petersburg as the traffic is crazy and you won’t experience the courtesy you’re probably accustomed to as a pedestrian back home.

Russian Museum: Housed in the Mikhailovsky Palace which dates back to 1819, this is one of the largest museums in Russia and home to one of St. Petersburg’s finest art collections. Its original exhibits when it opened its doors in 1895 came from the Heritage Museum amongst others but later acquired important private collections after the Russian Revolution. Its lovely gardens are an ideal place to take a break from the city sights.

Kazan Cathedral: Based on the design of St. Peter’s Basilica in Rome this enormous Cathedral is dedicated to Our Lady of Kazan, one of Russia’s most revered icons. 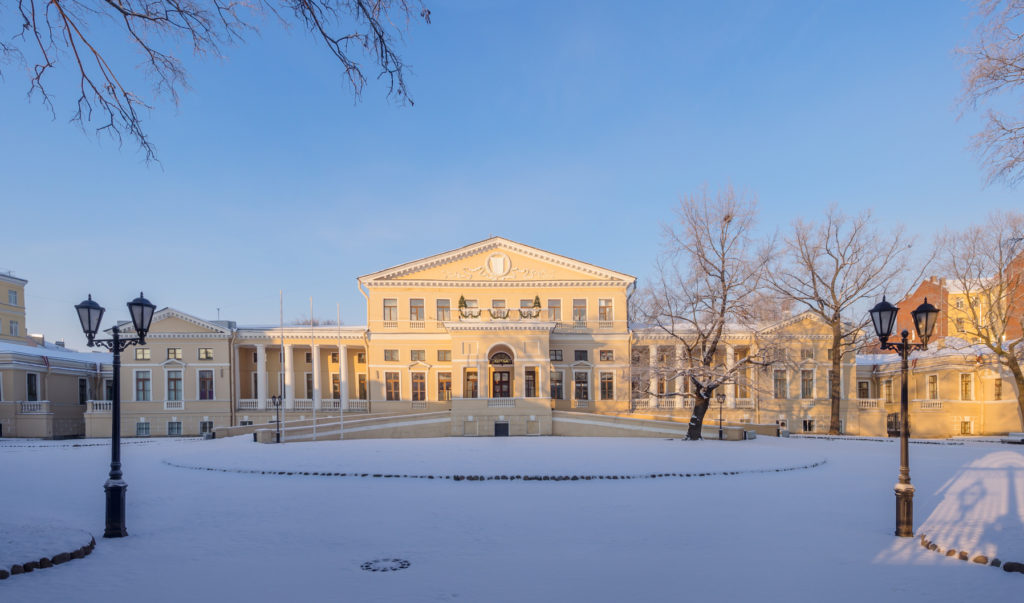 St. Petersburg in the winter. The Yusupov Palace on the Fontanka in frosty sunny day, panorama

One Night in Saint Petersburg

Most cruise ships arriving in St. Petersburg have at least one night which allows you to either spend your second day seeing more of the city sights or alternatively you might prefer to take an excursion beyond the city to discover some of the magnificent palaces which lie within easy reach of the cruise port. In a full-day excursion it’s just about possible to visit what are probably the most beautiful of these Romanov Palaces:

Catherine Palace: Located in the town of Pushkin some 25km south of St. Petersburg this palace formerly served as a summer residence for the Russian royalty. The original palace was commissioned by Catherine I in 1717 but much of the grandeur which is evident today came later. Its world-famous Amber Room was presented to Tsar Peter the Great by the Prussian King Frederick William I in 1716. This gold decorated chamber was stolen by the Nazis during World War II and has never been recovered. A reconstructed version of what has been described as an “Eighth Wonder of the World” is now on display in the Catherine Palace thanks to more than 20 years of meticulous work by Russian craftsmen. 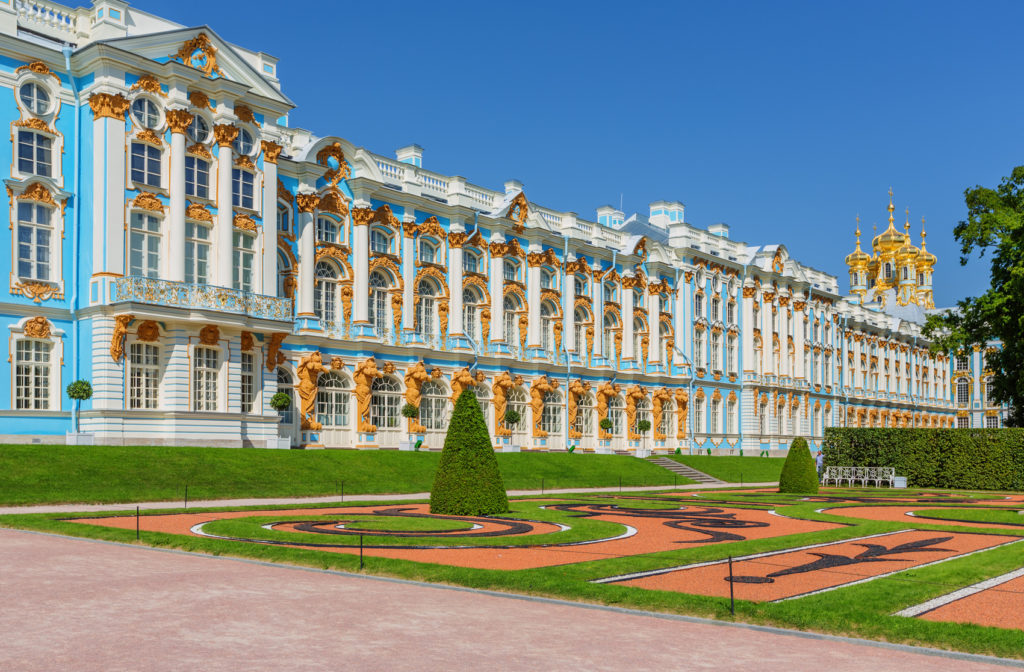 Peterhof Palace: Located 35km west of St. Petersburg by road on the Baltic Sea, this beautiful palace and gardens is a a UNESCO World Heritage Site which is often referred to as the ‘Russian Versailles’. Peter the Great was responsible for its construction which began in 1714 based on his own plans to locate a Royal palace in the city suburbs. His daughter would later develop the estate further and was responsible for installing the spectacular fountains which we see today.

On the evening of your night in port try to attend a show at one of Saint Petersburg’s many cultural centres. Amongst the city’s most famous venues is the Mariinsky Theatre which has been one of Russia’s most celebrated music theatres since opening its doors in 1860 and continues to host frequent opera, ballet and classical music performances of the highest order. Between May and July all kinds of cultural activities take place during the White Nights Festival with the Mariinsky as the main venue.