Lying in the eastern Aegean Sea just 1.6km off the Turkish mainland is the mountainous Greek Island of Samos. It has long been known for producing a sweet dessert wine from the Muscat grape which is cultivated in the vineyards located on the slopes of Mount Ampelos. Production dates back as far as 1200BC. The island’s other main claim to fame is that it is the birthplace of Pythagoras whose theorem about the angles of triangles continues to baffle young Mathematics students to this day.

Cruise ship passengers visiting Samos can enjoy a few hours wandering around the island’s main town which is known as Samos Town by visitors and Vathy by locals. Time permitting you might take a short excursion to a nearby UNESCO World Heritage Sites or head along the coast for lunch at a traditional fishing village.

Cruise ships arrive at the main port on the island’s north-east coast. Lying just a few minutes’ walk from the main town of Vathy, the dock is in an ideal location for exploring the island’s capital which is home to a fine selection of shops, restaurants and typical taverns. Taxis are on hand to take visitors to other destinations around the island. 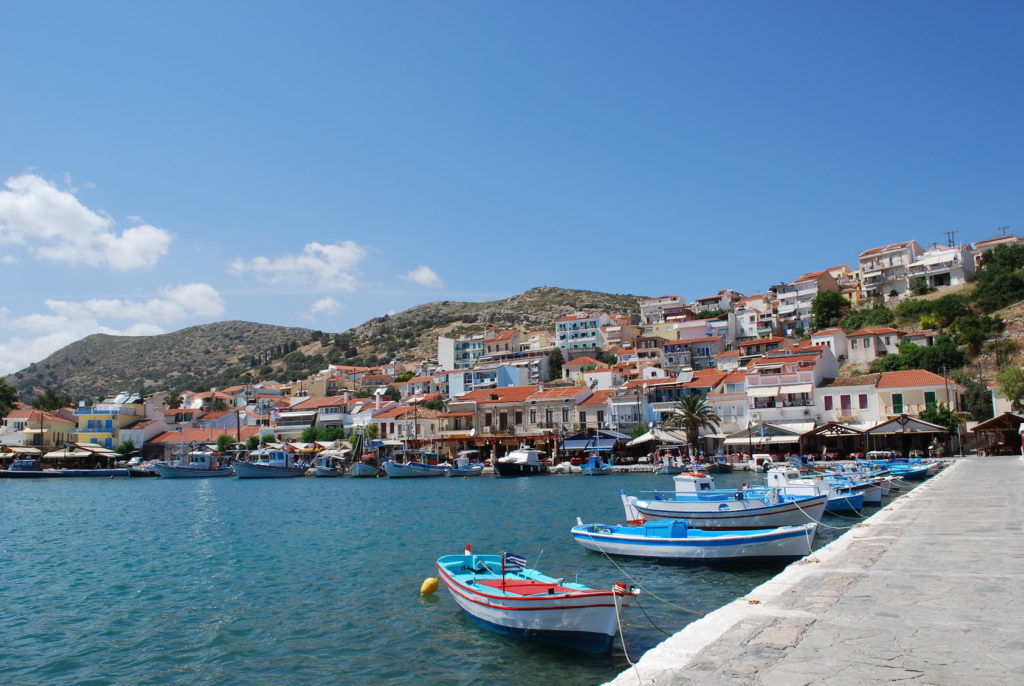 Samos International Airport is named after the astronomer and mathematician, Aristarchos, who was born on the island. It lies 17km south-west of the cruise port near the town of Pythagorion. It caters mainly for seasonal charter flights from destinations all over Europe though some year round services do operate from Athens with Olympic Air and the Greek regional carrier Astra Airlines. The most reliable form of transport from the airport is to pre-book a transfer from Samos Airport with Shuttledirect who cater for all group sizes and to destinations around the island.

Archaeological Museum: Whilst you’re likely to come across a number of archaeological museums during your cruise around the Greek Islands, this one is well worth a visit. It houses an impressive selection of artefacts unearthed around the island from Prehistoric to Roman Times. Located in the main town, the museum is only a short walk from where your cruise ship docks.

Samos Wine Museum: Located around the bay to the south of the port this little wine museum is worth a brief visit. It’s not the polished winery experience on offer in major wine producing regions but does provide a glimpse of how the local industry has developed. The short tour is self-guided and you can taste some wines for a very cheap price at the end of your visit.

Insider Tip: Less than 2km north of the port is Gaghou beach which is a lovely spot for a swim and a great place for lunch. Highly regarded is Vergina Restaurant (Themou Stefanidi) which serves excellent grilled octopus and chicken souvlaki as well as other local specialities such as tzatziki and Greek salad. 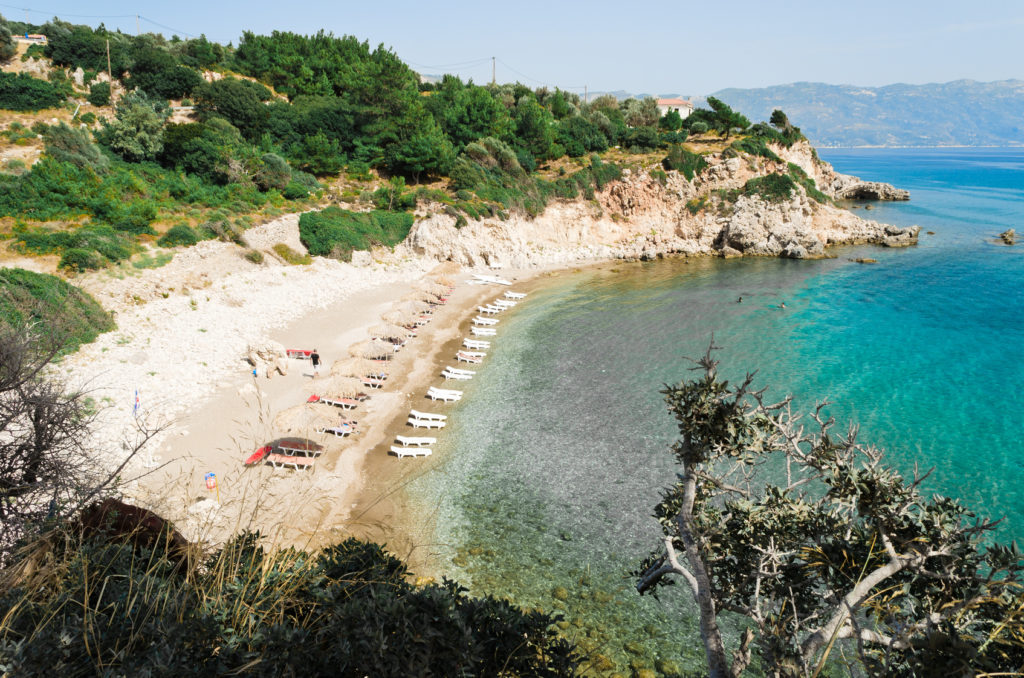 Pythagoreion: Just 14km south-west of the cruise port this historic village was the birthplace of the famous mathematician, Pythagoras. It is also home to an important archaeological site which includes the Tunnel of Eupalinos, an impressive feat of engineering which served as an aqueduct as far back as 6BC. The nearby Pythagorion Archaeological Museum is regarded as one of the country’s finest and is well worth a visit. Another local attraction is the Monastery of Panagia Spiliani which is a small church built inside a cave which is famous for its marble icon of the Virgin Mary. Just west of Pythagoreion (near the airport) is Potokaki Beach which is one of the most popular on the island.

Heraion of Samos: Just 8km along the coast to the south-west of Pythagoreion lies the Temple of Hera which was once a vast site dedicated to Zeus’ sister. Originally built in the 8th century BC it was destroyed by earthquakes leaving a single column for modern-day visitors to see. Together with Pythagoreion, these two attractions are listed as World Heritage Sites by UNESCO. Heraion Beach which lies very close to the temple is another popular venue for sunlovers. 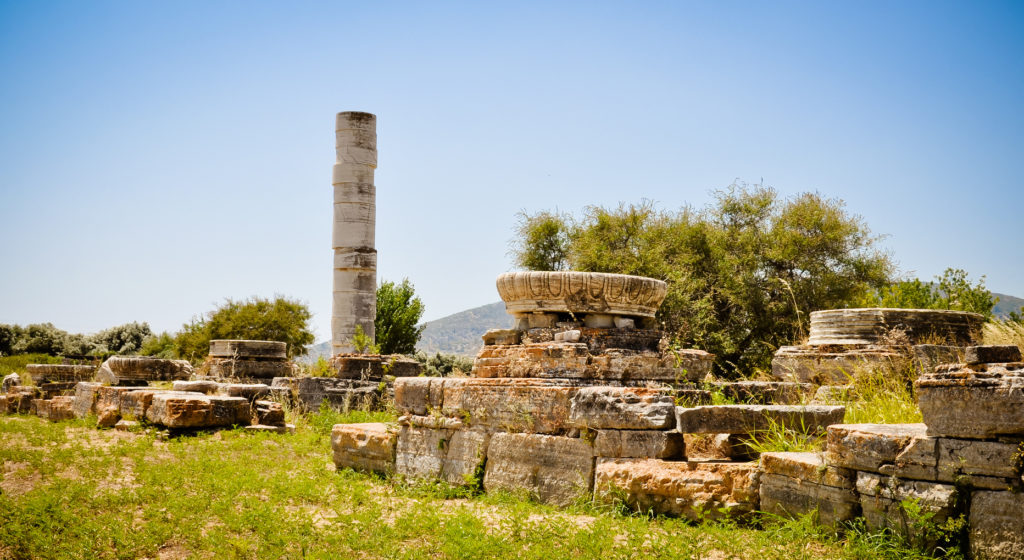 Kokkari: Located on the island’s north coast, the pretty fishing village of Kokkari lies just 10km north-west of the cruise dock. Local taxis are more than happy to take you there if your cruise line doesn’t include this picturesque location on their excursion itinerary. If you time your visit correctly you can enjoy an excellent seafood lunch on the terrace of the popular Meltemi Restaurant followed by a dip at one of the nearby beaches.

One Night in Samos

If your cruise itinerary allows for an overnight stay in Samos Town you’ll find some lovely venues where you can enjoy an evening meal. A popular choice amongst passengers is Tasos Tavern (Eparchiaki Odos Vathiou) which is just over 1km north of where your ship will be docked. This friendly restaurant serves excellent Greek cuisine in a most romantic setting with beautiful views of the sunset. In the town itself you’ll find little in the way of gourmet cuisine but there are some traditional Greek taverns where you can sample typical local dishes. Highly recommended is Yianni’s Ouzeri (49 Likourgou) which frequently hosts Greek music evenings during the summer months.