One day is never enough to spend in a city as creative and culturally rich as Barcelona, but when you’re trying to squeeze in as much as possible on a Spanish sojourn, one day might be all the time you have.

Barcelona is surprisingly easy to get around, so with an early start you really can get under the skin of this wonderfully quirky city quite quickly. But be warned, it won’t be long before it gets under yours as well – you WILL be back!

If Barcelona has a heart and soul you’ll find it along the famous Las Ramblas, and this mile-long microcosm of Spanish life is a logical place to begin. Your starting point is one of the most vibrant and exciting parts of the city – the Plaça de Catalunya, defined by its distinctive fountains and sculptures.

Plaça de Catalunya is located at the top end of Las Ramblas and the station of the same name is serviced by both the metro and suburban train network. If you want to start at the port end of Las Ramblas you’ll need the Drassanes metro stop. 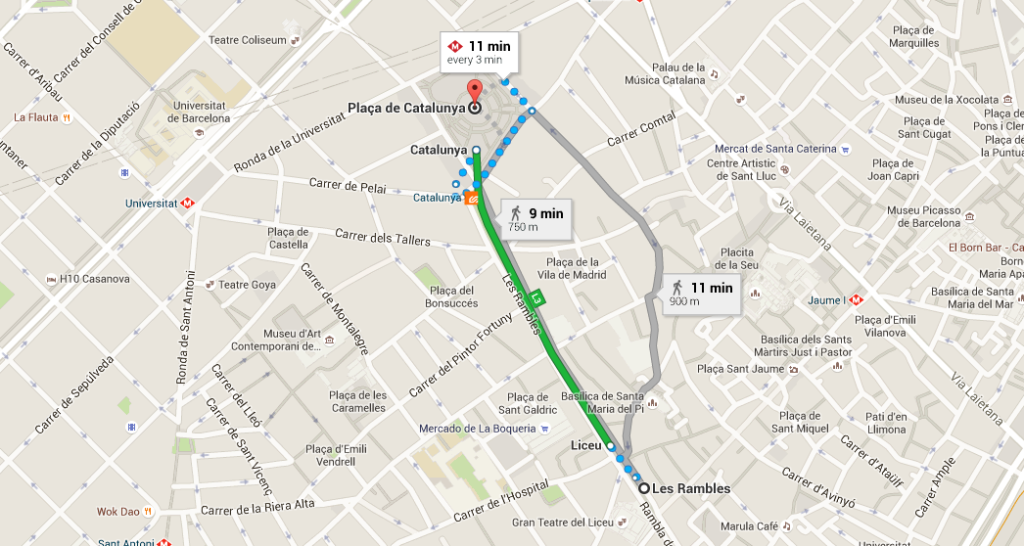 From Plaça de Catalunya to the Port

If you get to Plaça de Catalunya early you can enjoy a quiet coffee in one of the many open-air cafes and watch as the plaça comes to live with locals, tourists, street performers and an endless parade of pigeons. Marking the intersection of the medieval Old City and the modernist Eixample area, Plaça de Catalunya is a great place to get a feel for the unique Catalonian architecture for which the city is so famous.

The beauty of Las Ramblas is in its colour, diversity and plethora of densely packed cafes, restaurants and shops. Completely pedestrianised and lined by a canopy of trees, you could take an hour or two to wander leisurely down this lively avenue and not get bored.

As you make your way along Las Ramblas keep an eye out for:

Stroll Through History in the Barri Gòtic

After lunch, it’s time to step off Las Ramblas (to your right if you’re facing the port and to your left if you’re facing back up towards Plaça de Catalunya) and step back into medieval times, in the Barri Gòtic. The city’s fascinating Gothic quarter, home in its day to artists Pablo Picasso and Joan Miró, is a jumble of narrow cobbled streets and cloistering medieval architecture. You could spend the whole day getting lost and found in this history-laden quarter, but if you can only spare a few hours concentrate on the highlights.

Must see attractions in the Barri Gòtic:

Rise Above the City at Montjuïc

You can never really know a city unless you get some elevation, so your next stop is Montjuïc Hill, which not only offers spectacular 360-degree views over the city, but is also home to the famous Montjuïc Castle (now a military museum) and a number of other worthwhile museums.

You won’t have time to do them all, but choose any of these for a quick dose of culture and you won’t be disappointed. 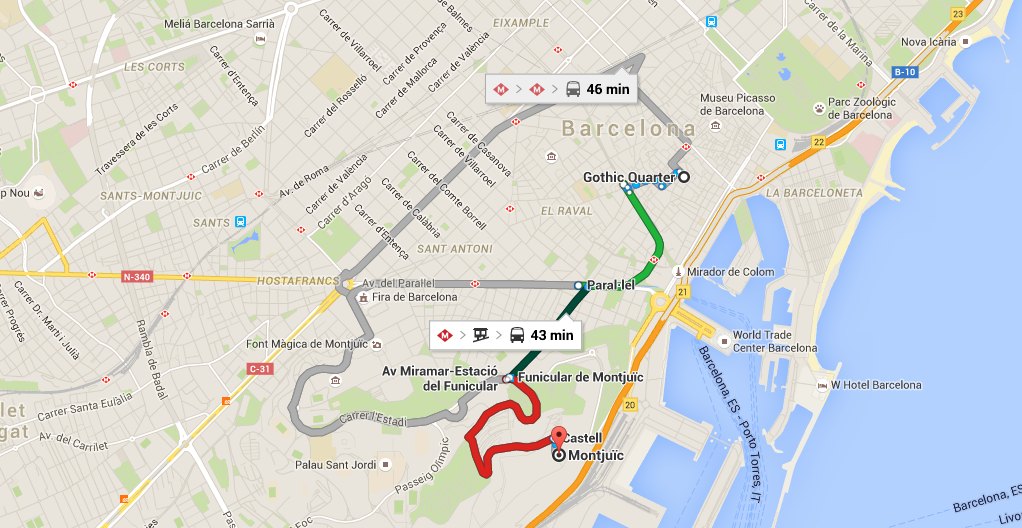 Take the funicular from Poble Sec metro station to the top of Montjuïc – included in your metro ticket – then the cable car up to the castle, admission €5. 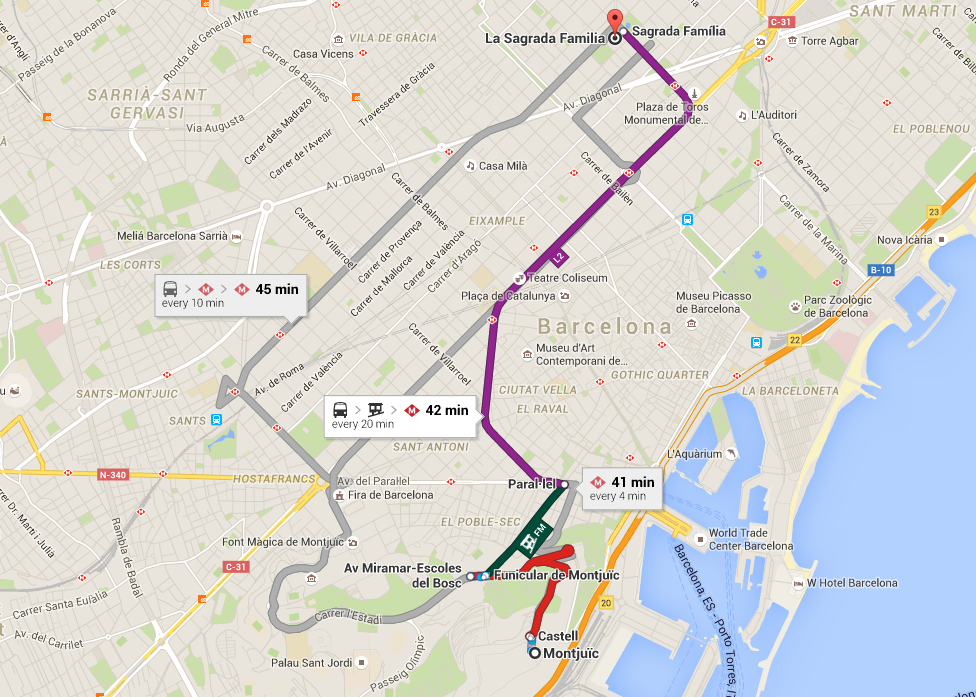 After the heady heights of Montjuïc it’s time to blow your mind with a very different kind of view – Gaudi’s spectacular Sagrada Família. The subject of much dissention within the architectural world, the mammoth cathedral is still unfinished after many decades and numerous attempts. Whether you love it or hate it, you’ve just got to see it to believe it!

To wrap up a wonderful whirlwind tour of Barcelona, the last stop is Gaudi’s second most famous legacy, the magical Parc Güell. Filled with quirky statues and mosaics, there’s no better way to spend your last few hours than enjoying a spectacular Spanish sunset overlooking the city.

Metro Line 5 will get you straight to the doorstep of the Sagrada Família, then hop back on and take Line 3 to Lesseps to get you to the bottom of Parc Güell. Admission to Sagrada Família is €15 or €29 to climb the towers, open daily 9-6pm, later in summer. Entrance to Parc Güell is €8, open daily 8am-8.30pm. 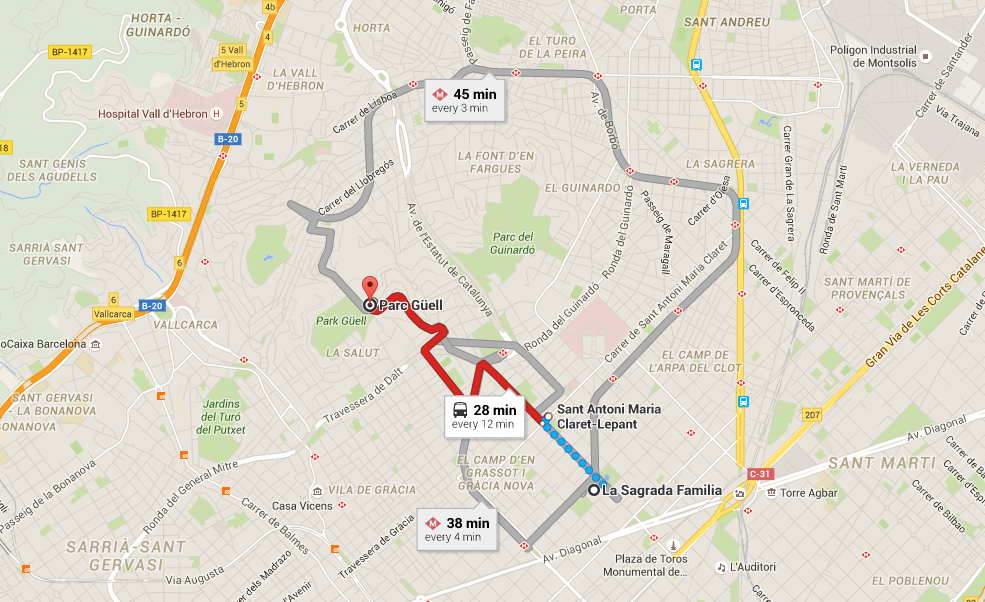 How to Get to Barcelona

It only takes around two hours by air to get to Barcelona from the UK and there are plenty of regular direct flights available with budget carriers. If you want to take public transport from the airport into the centre of the city you can take the R2N train or the A2 bus, which will both get you in to the central hub at Plaça de Catalunya station.

For the fastest and most convenient way of getting to the city, you can book one of Shuttle Direct’s Barcelona Airport transfers to drop you right at the door of your accommodation – or anywhere central if you’re just on a day stopover. You can choose from a private or budget-friendly shared transfer and you’ll be met at the airport and driven the short, 30-minute journey into the city without delay. 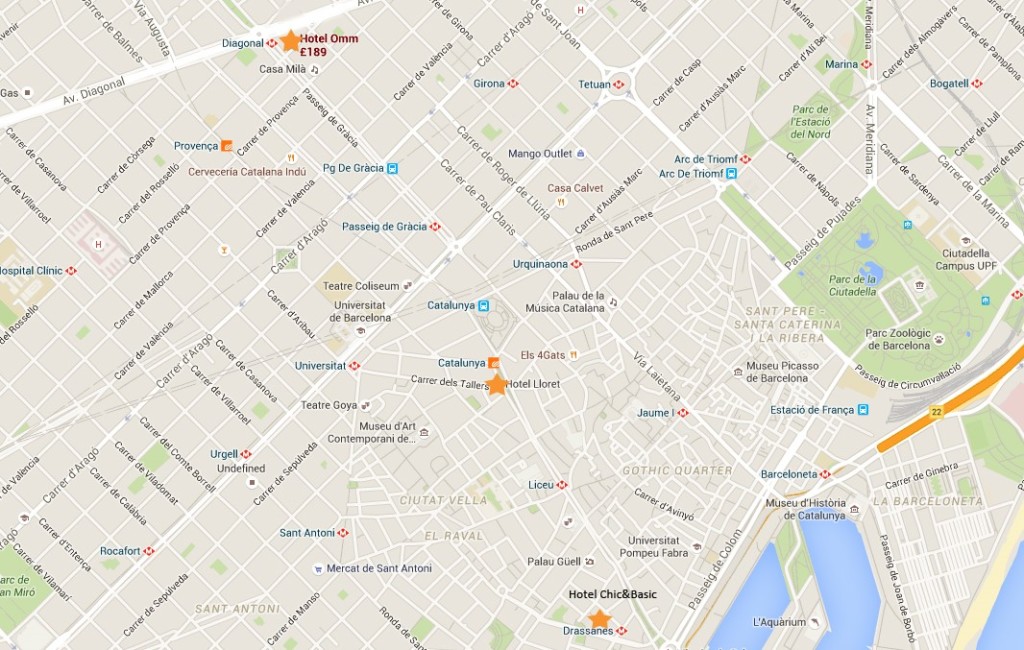 Hotel Lloret Ramblas – With the same quirky spirit as Las Ramblas itself, the Hotel Lloret Ramblas offers charming, character-filled accommodation in the heart of the action. On the doorstep of the buzzing Plaza Catalunya and just a short stroll from all the iconic highlights, you’ll be able to soak in the ambience of the most famous street in Barcelona from this cosy and colourful little hotel without breaking the budget.

Hotel Chic & Basic – With a fun 1960s ambience and décor, the Hotel Chic & Basic lives up to its name in true Catalan style. With rooms individually decorated in an array of colours and a vintage vibe throughout the common areas, staying in this unique hotel is an experience in and of itself. Book in to the hippest place in town, just a two minutes’ walk from the famous Las Ramblas.

Hotel Omm – The uber-cool, contemporary Hotel Omm offers a luxurious stay in every way – right down to late checkout. With a sleek, stylish décor emanating a feeling of Zen throughout, you’ll enjoy pampering from head to toe in the spa and treatment centre, and on the inside as well in the Omm’s own Michelin-starred restaurant, the Roca Moo.