Standing on the Thau Lagoon in Southern France, the historic fishing port of Sète is best known for being the terminus of the Canal du Midi. This incredible fete of 17th century engineering is a 240km canal which connects the Mediterranean with the Atlantic near Bordeaux. It is just one of five UNESCO World Heritage Sites which can be visited by cruise ship passengers from the Port of Sète.

Visitors who prefer not to head out on shore excursions will find a down to earth working port with friendly locals. Whilst there is little in the way of major tourist attractions there are plenty cafés and restaurants overlooking a canal network which has seen Sète heralded as the ‘Venice of the Languedoc’. The best view of the canals is available by hiking to the top of Mont Saint-Clair which overlooks Sète from the west. A more relaxing pastime is to simply head out of town and enjoy the 12km of beaches which lie between the sea and the lagoon.

The Port of Sète dates back to the 17th century when Louis XIV ordered its construction with the purpose of exporting the produce of the Languedoc region. To this day it serves as a major commercial port with a sizeable fishing fleet. Most smaller cruise ships dock at Quai d’Alger which is just a short walk from the city centre via the Pont de la Savonnerie bridge. Some larger vessels berth further east at the Epi Dellon facility which entails a short tender ride to the cruise terminal at Quai d’Alger.

The Port of Sète lies equidistant between the airports of Montpellier and Béziers which are 35km to the north-east and 35km to the south-west respectively. Ryanair is the only airline providing flights to Béziers Cap d’Agde Airport whilst Montpellier–Méditerranée Airport is served by a number of operators from across the continent.

There is bus transport from both airports to their city centre railway stations from where train services run to the Gare de Sète. Cruise ship passengers can pre-book private transfers from Montpellier Airport to the Port of Sète which proves far more convenient than relying on public transport when carrying large amounts of luggage.

Getting Around in Sète

From the cruise terminal at Quai d’Alger all the city’s main sights are accessible on foot although some passengers may prefer to take a bus or taxi if they are planning on visiting the peak of Mont Saint-Clair. A nice way to get your bearings is to hop on Le Petit Train de Sète (Quai Général Durand) which offers a 40-minute itinerary around the main streets. Another novel way to get around is on a boat trip which offers short tours of the canals departing from Quai Général Durand as well as longer trips which include the Étang de Thau (lagoon).

With a limited time in port the shore excursions offered by cruise lines are highly recommended from the Port of Sète. Time permitting, independent travellers might prefer to head from the port to the railway station of Gare de Sète (78 Place André Cambon) and take the train to the likes of Nimes, Montpellier, Beziers or Carcassonne.

Whilst a stroll through the old port town with a refreshment break overlooking the Canal Royal is the main pastime for visitors to Sète, there are a few particular attractions worth looking out for. The main church in town is L’église Saint Louis (Rue des 3 Journées) which was built in 1702. The Virgin Mary standing on top of its bell tower is clearly visible from the port.

On the opposite side of the main canal is the Centre Régional d’Art Contemporain (26 Quai Aspirant Herber) which displays exhibits of contemporary French art in what used to be a fish storage warehouse. A more solemn sight is the war memorial in the Jardin du Château d’Eau (Avenue Max Dormoy) which is dedicated to those citizens of Sète who lost their lives fighting for France going back to the First World War. 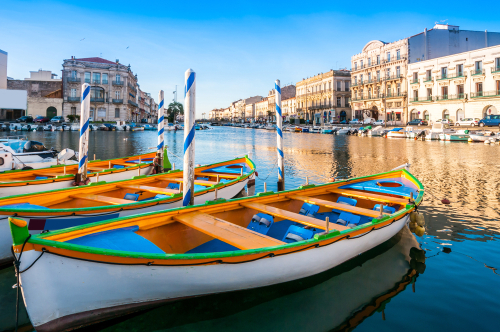 Just west of town is the lovely chapel of Notre-Dame la Salette which stands on top of Mont Saint-Clair. The wives of local fishermen embark on an annual pilgrimage to this site every September. Visitors can get there on foot although the steep walk is fairly challenging. An easier option is to take a taxi or number 5 bus from the port to the summit then walk back down to the town. Panoramic views from the top over the canals of Sète and beyond are quite extraordinary.

Cruise ship passengers who prefer to enjoy a relaxing day in port rather than engage in any sightseeing can simply take a stroll to the west out of town following a lovely boardwalk. This leads to a long stretch of quiet, sandy beaches some of which are overlooked by excellent seafood restaurants serving the day’s catch from the Port of Sète.

The Port of Sète serves as a gateway to a number of destinations including five UNESCO World Heritage Sites. Train services from the Gare de Sète are available to Nimes, Montpellier, Beziers and Carcassonne although official shore excursions are recommended as they usually include various stops and guarantee that passengers will get back to Sète in time for their ship’s departure.

The first place of interest heading north-east from the port is the city of Montpellier (37km). This historic city was the site of Europe’s first medical school during the 12th century and serves as the capital of the Languedoc-Roussillon region. Further around the coast is the fortified city of Aigues Mortes (54km) which has a history dating back to the 13th century when it served as a departure port for the Crusades. 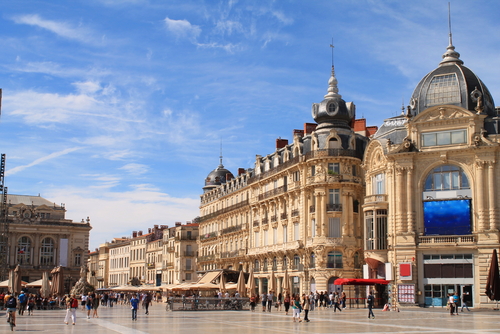 Inland is the Roman city of Nimes (85km) which is home to an impressive amphitheatre which hosts bullfights during the Feria de Nîmes every May. Further afield is the beautiful city of Arles (100km) which is best known for its well preserved Roman and Romanesque architecture.

In the opposite direction from the Port of Sète lies the city of Béziers which lies 62km to the south-west. This is one of France’s oldest cities dating back to Neolithic times. It attracts many visitors who come to take a short cruise along the Canal du Midi which is particularly interesting around Béziers. Shore excursions may stop here en route to the city of Carcassonne (136km) whose fortress is one of France’s greatest tourist attractions.

Independent travellers who decide to take the train to Carcassonne should note that the journey takes around 1 hour 20 minutes on a direct service and a little longer on trains which require a change in Narbonne.