Situated on a mountainside on the east coast of Sicily, Taormina is just about the most romantic location you can think of. With a dramatic backdrop featuring the deep blue waves of the Ionian Sea, the distant but imposing snowy summit of Mount Etna, and ancient ruins dating back to Grecian times, that grand romantic gesture you’ve been planning could be one for the history books.

So pack a weekend bag, grab your partner’s hand, and get ready for some Sicilian sizzle! 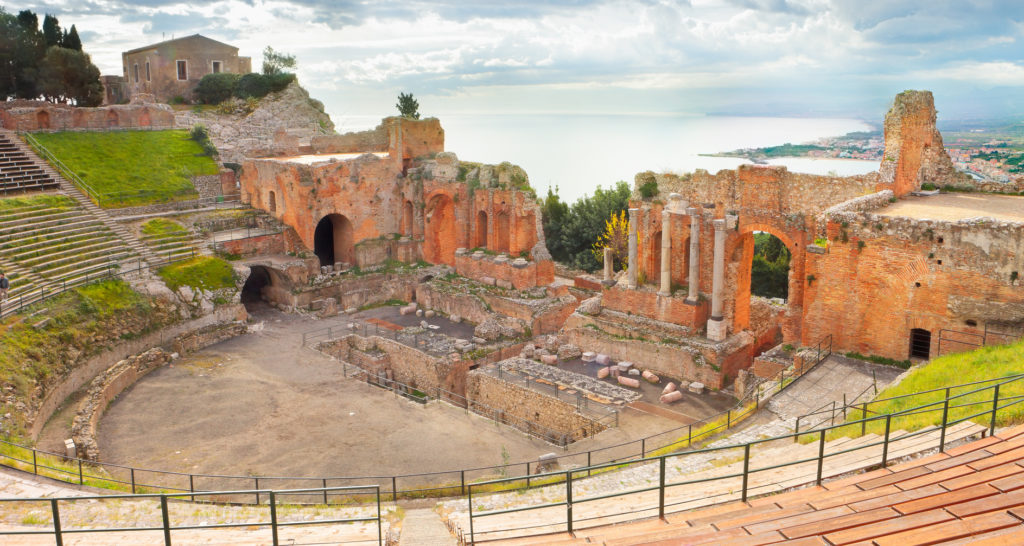 Taormina’s most-visited site, this horseshoe-shaped theatre sits high on a cliff overlooking Mount Etna and Naxos Bay. (Don’t forget the camera, the photo ops are almost too good to be true!) Built in the 3rd century BCE, the theatre is the second-largest in Sicily after Syracuse. In summer, you can catch art exhibitions and film festivals here, so be sure to check the schedule!

In the centre of Taormina, this lovely pedestrian thoroughfare is always an inviting place for a stroll. Begin at the Palazzo Corvaia (a 10th-century palace that now serves as the tourist office) and work your way west along the long medieval street, passing shops, boutiques, cafes, bars, and churches on your way. You could probably while away the entire day here browsing souvenirs, spooning gelato into your sweetheart’s mouth, or simply taking in the views from the hilltop. 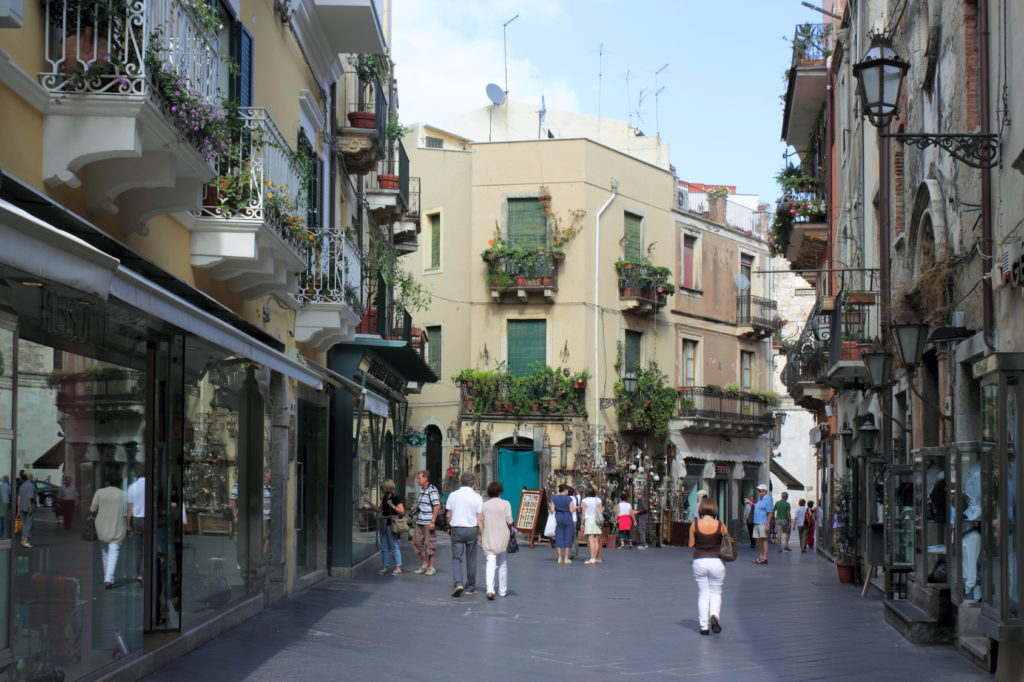 If you and your partner are up for a little exercise, take the short but steep climb up Monte Tauro. Beginning from Via Circonvallazione, follow the signposted path uphill past the tiny 17th century church, Santuario Madonna della Rocca. Further up the mountain are the remains of a Saracen castle, though a gate blocks the path to the structure. No matter though – the real attraction is the heavenly view of the deep blue waters of the Ionian Sea and Taormina spread out before you. 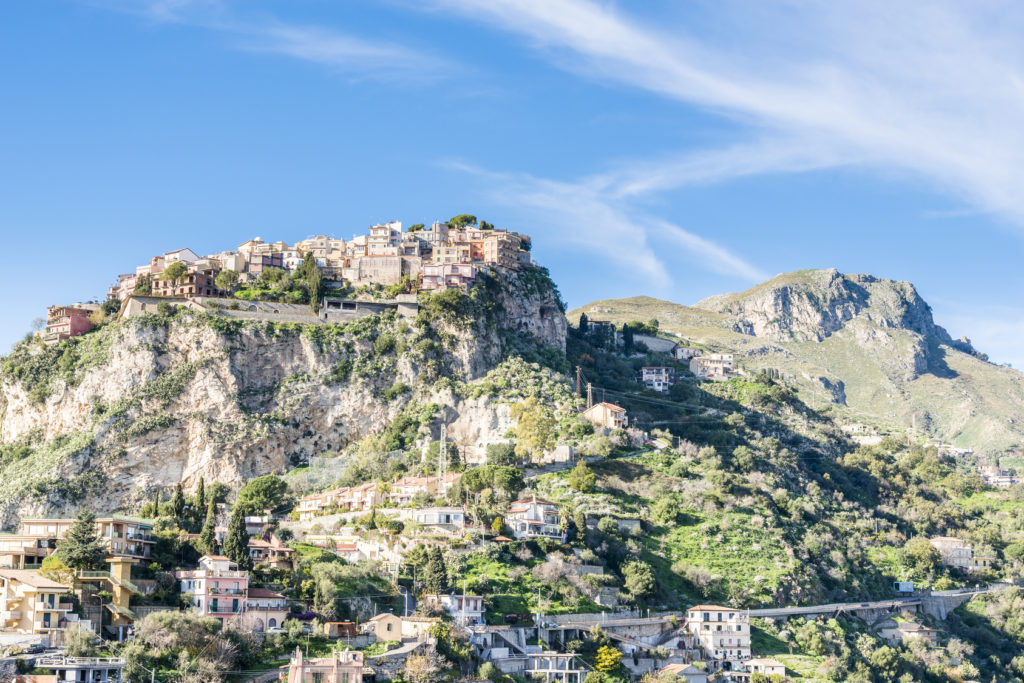 Taormina’s nearest beach is located directly beneath the town, accessible by cable railway. The beach is pebbly, but plenty of sunbeds are available for hire so you don’t have to worry about finding a comfortable place to settle. The beach is one of the most popular in the area, so it’s best to arrive early to claim your place. With plenty of amenities, bars, and restaurants nearby, you’ll be perfectly happy staying here all day. 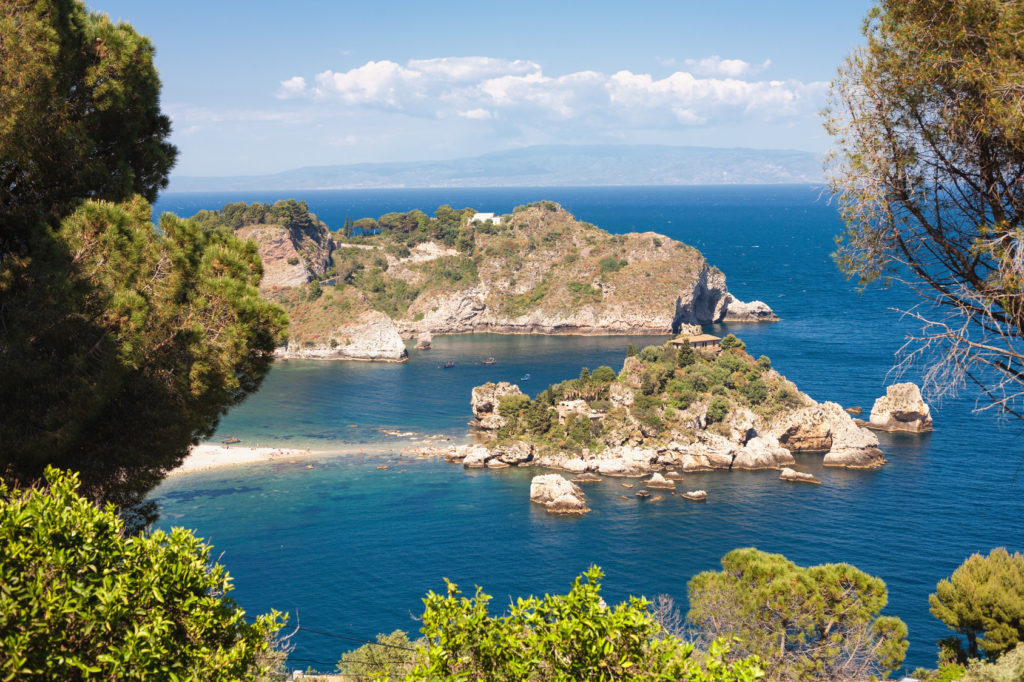 Just southwest off the coast of Lido Mazzaro is the tiny, rocky islet of Isola Bella, also known as the Pearl of the Ionian Sea. Covered with lush vegetation, the islet is actually a nature reserve and home to several types of birds and lizards. At low tide you can reach the island on foot via a narrow sandbar – but it’s best to take your shoes off first. 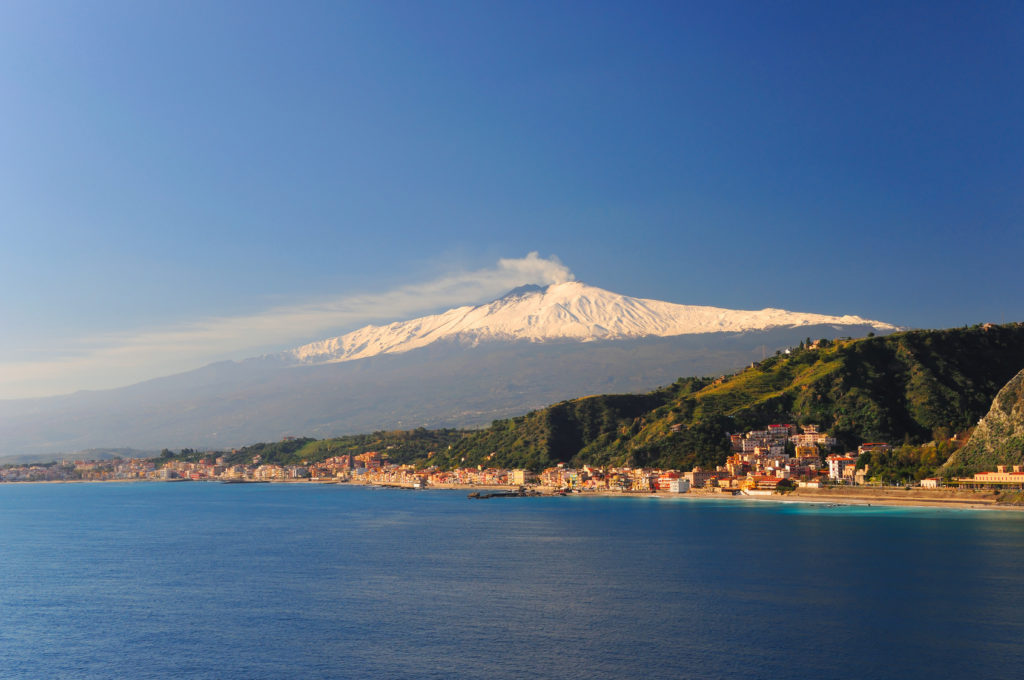 If you want to go a little further afield, Europe’s largest active volcano, Mount Etna, is only a 45-minute drive away. Etna is in an almost-constant state of activity, so the volcano’s landscape is always changing. Mount Etna and its slopes have been part of a national park since 1987, which encompasses varied landscapes from snowcapped mountaintop to lush woods, lava fields to vineyards. Because of the volcano’s frequent eruptions, the park is sometimes closed to visitors. But if you and your partner do manage to make it, the excitement of standing atop an active volcano is almost as intense as being in love!

How to Get to Taormina 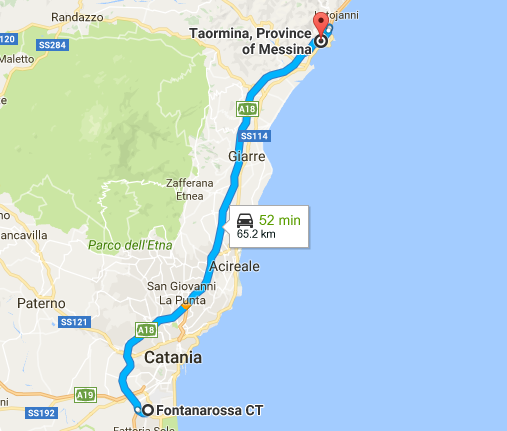 Taormina is served by Catania Fontanarosa airport on Sicily’s east coast. While flights to the island are not as abundant as those to the major European capitals, easyJet does run one nonstop flight from London to Catania (about three hours in duration), and many other airlines run flights with one or more stops.

Once you’ve landed, get your romantic weekend off to a running start by jumping right into a pre-booked airport taxi to Taormina. With just a few simple clicks online, you can arrange your transport from Catania airport to your accommodation and back. The drive is just under an hour, with stunning views of the Ionian Sea off to the east.

Villa Angela – Just ten minutes’ walk from the beach, this 27-room boutique hotel combines convenience with the quiet intimacy you want from your romantic weekend away. All the rooms come with a private terrace offering panoramic views. We recommend springing for the deluxe superior rooms, which come with a whirlpool tub in the bathroom.

Belmond Grand Hotel Timeo – For an unbeatable luxury experience, look no further than this five-star hotel. From the sea-view terrace you can take in the Sicilian coast, the Greek theatre, and the mountains wreathed in clouds. Stroll the gardens which are bursting with magnolias and palm trees, or treat yourself to a massage at the spa…

Whatever romantic escape you’re planning next, Shuttle Direct can help make it happen. As the largest provider of airport transfer services across Europe and North Africa, we’ve got loads of experience making our customers’ travel plans just a little bit easier. Book your next transfer with us and discover the Shuttle Direct difference.