On the “bucket list” of many of the hedonists of the world is the opportunity to ski in the morning and swim in the sea in the afternoon. Whilst few places in Europe offer this wonderful opportunity, you may be surprised to learn that the south coast of Spain is one of them. Just 120km from the popular holiday resort of Nerja on the eastern Costa del Sol is the ski resort of  Sierra Nevada. You can leave Nerja at 7 o’ clock in the morning and be collecting your ski pass by 8.30am. After a morning on the slopes under the glorious blue skies of southern Spain you can head back to the coast and take a dip at Playa Burriana or one of the other lovely beaches in Nerja. Now that really is living the dream!

If you’d prefer to add a little more of a Spanish flavour to your holiday and would like to be even closer to the slopes then you could stay in Almuñécar or Salobreña on the Costa Tropical. The sub-tropical climate of this little known part of Spain allows for the cultivation of mango, avocado and chirimoya (custard apples) which is quite a rarity in mainland Europe and provides visitors with an entirely different holiday experience than what the Costa del Sol has to offer.

In the year 711 Moorish armies crossed the Straits of Gibraltar into what we know as modern day Spain and occupied large parts of the peninsula for more than 700 years. The area most influenced by the Arabic occupancy was today’s Andalucia which remains a living legacy of the Moorish era. Nowhere is this influence clearer than in the city of Granada which is home to the magnificent Alhambra Palace. The Alhambra was the jewel of the Moorish Empire in Spain and remained under the control of the Nasrid dynasty until 1492 when ‘Los Reyes Católicos’, Isabel y Fernando, completed the conquest of Granada which was the final stage of the ‘Reconquista’ effectively returning all the country’s territory into Christian hands.

The Sierra Nevada ski resort is less than 30km from the lovely city of Granada providing skiers with the opportunity to visit this UNESCO World Heritage Site which, together with the Mezquita in Córdoba and the Alcázar in Seville, is higly recommended for anyone with a cultural interest in Spain. Some visitors to the region choose to stay in Granada then take day trips up the mountain to go skiing. 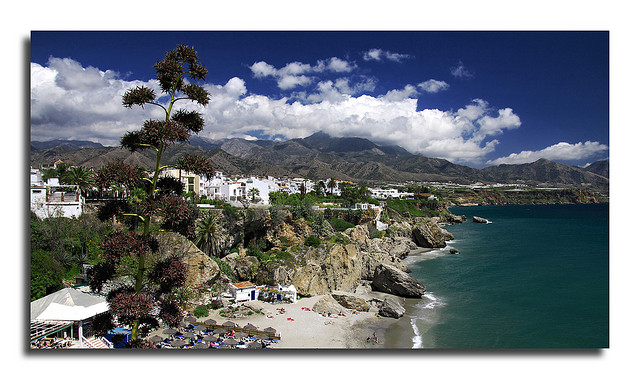 Getting to the Sierra Nevada

Staying in Nerja, the Costa Tropical or Granada city provide you with the opportunity to head up to the slopes for a day. Early morning buses from the coast aren’t a convenient option to get you to the slopes early enough whilst buses from Granada are often packed. Taking your own hire vehicle is a better option but early morning traffic on glorious winter days can be tiresome and after heavy snow you’ll need to stop at a garage as you begin to climb the mountain to purchase (expensive) snow chains for your car. Traffic on public holidays and at weekends is unbearable.

For the dedicated skier looking for a proper ski holiday you really want to be planning a week in the Sierra Nevada which is best accessed from Málaga airport since Ryanair withdrew its services to Granada airport. The scenic inland route from Málaga airport to Granada via the A92 is 130km and takes about 1½ hours. There are buses from the airport into the city of Málaga from where there are departures to Granada every hour. This service only gets you to Granada so you’ll then need to get transport up to the resort. A far better option is to pre-book a ski transfer from Malaga airport which will meet you on arrival and transport you directly to your hotel in the Sierra Nevada resort. Of course you could rent a car at Malaga airport and drive there but be prepared to buy chains on the way up the mountain if there’s been a heavy snowfall and on arrival you’ll find that secure parking in the resort for the duration of your stay will put quite a dent in your holiday budget.

The main claims to fame of the Sierra Nevada is that it is Europe’s most southerly ski resort and, with Mulhacén at 3478m, it is the highest point in mainland Spain (Mount Teide on the island of Tenerife is 3718m). On a clear day from the slopes of Pico del Veleta, which stands at almost 3400m, you may be lucky enough to enjoy the majestic views of the Atlas Mountains in Morocco far in the distance.

The resort is centred on the ski village of Pradollano at 2100m where most of the accommodation is found and around which the après-ski revolves. Such elevation can encourage an extended season which has been known to last from November through until May but with the likelihood of relatively high winter temperatures in this southerly latitude it’s impossible to guarantee such a season. The unpredictability of the amount and quality of snow on the slopes has encouraged the purchase of over 300 snow cannons which come into their own in ensuring that skiers aren’t disappointed during warm, sunny days. Such is their efficiency that the main slopes are more likely to close due to high winds than a lack of snow. The village itself is very well equipped with ski hire shops, multilingual ski schools and an impressive array of bars and restaurants.

From Pradollano there are two gondolas that run up to the main ski station at Borreguiles (2675m). Ski lifts are then available to take more advanced skiers to the resort’s more challenging slopes. Non-skiers can use the gondola and hang out at the popular cafés where the resorts “beautiful people” like to ensure their new ski attire is being admired! Even if you’re not skiing be sure to wear plenty sun screen as the winter sun can be deceptively hot.

Lift Pass Warning … Do not buy cheap passes from individuals trying to sell them to you at reduced prices. They are not valid and you won’t get on to the slopes with them. Buy your passes at one of the many ticket machines around the resort.

Your accommodation options in Sierra Nevada are pretty much ‘up the hill’ or in the village. Where you’ll choose will often be decided by budgetary factors with many of the better hotels located above the village and the majority of budget and mid-range options in and around Pradollano. Of particular note amongst the upmarket options are the Vincci Seleccion Rumaykiyya which offers stunning views of the surrounding mountains and the intimate El Lodge which is a traditional ski lodge operated by the prestigious Marbella Club Group. Both hotels can be reached by chairlift from the village and allow you to ski directly out on to the slopes. After hours they offer shuttle bus services back from the village. Even if you’re not staying at El Lodge it’s highly recommended that you take a break on their ample terrace and enjoy the splendid views it has to offer.

Down in the village the 4-star Melia Sierra Nevada is a well established favourite which is well located and popular largely thanks to its swimming pool. Other popular options are the 3-star Hotel Ziryab and the 2-star Hotel Telecabina Montana. Both offer a great location near the ski lifts, hearty breakfasts and seriously hot showers providing some of the best value accommodation in town. 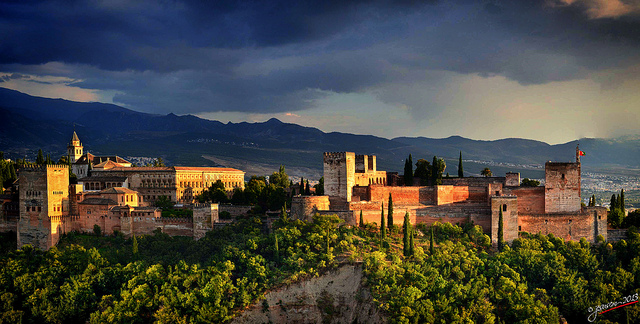 Probably the biggest negative with regard to Sierra Nevada is the limited amount of non-ski activities on offer when conditions force the closure of some of the slopes. Some of the better hotels have pools, spas and jacuzzis but there’s little in the way of publicly available facilities. The main non-skiing attraction is actually a day trip down to Granada with a visit to the Alhambra Palace, one of Spain’s greatest tourist attractions. It’s a good idea to pre-book entrance tickets before travelling (as they often sell out) then collect them on arrival in Granada.

Clearly the Sierra Nevada is not Les 3 Vallées in the French Alps but neither does it try to be. It’s a fun resort catering largely to inexperienced skiers but with enough to keep the more experienced ones entertained. It offers great value when compared with its counterparts in the Alps and an affordable après-ski scene which will appeal to most age groups and nationalities. If you fancy a budget ski break Spanish style then get your flights booked to Malaga and enjoy the slopes of Sierra Nevada with that lovely, warm sun included in your package!