Located on the south-east coast of Sicily, Siracusa (Syracuse in English) is a historic city founded by the Ancient Greeks. In its heyday it exerted significant power in the Mediterranean region becoming the major city-state of Magna Graecia. Subsequent civilisations who settled in the region left their mark on the city although many of their finest buildings were destroyed by an earthquake in 1693. The city has been largely rebuilt and together with the Necropolis of Pantalica is listed as a site of ‘Outstanding Universal Value’ by UNESCO.

Cruise ship passengers can easily enjoy a a few hours in Siracusa by simply wandering around the historic sights which are mainly located close to the port on the island of Ortygia. A little further afield but within the city limits is the impressive Neapolis Archaeological Park which is home to a Greek Theatre and a Roman Amphitheatre. Some cruise lines offer shore excursions beyond the city to the charming Baroque towns of Noto and Ragusaor and to the ancient port city of Catania.

The Port of Siracusa was traditionally a destination for small cruise ships although some larger vessels were able to dock offshore and tender their passengers to Ortygia. However, the opening of a 300m dock and a new maritime station next to Largo Molo Stazione Porto allows it to now welcome a number of larger cruise ships.

From the cruise dock passengers can easily walk into the historic centre on the island of Ortygia via Ponte Santa Lucia. Once on the island all its tourist attractions are accessible on foot. The Neapolis Archaeological Park lies on the mainland some 2km from the port. On foot it takes about 25 minutes to get there otherwise local taxis are easily available.

Passengers who are beginning or ending their cruise in Siracusa will most likely be arriving or departing through Catania Airport which lies 60km to the north. There’s a direct bus service from the airport to Siracusa as well as frequent bus and train services from the centre of Catania. The transport hubs in Siracusa are in fairly inconvenient locations for visitors heading for the port although there is a free shuttle bus from both the bus and train stations to Ortygia.

A far more convenient option for cruise ship passengers is to pre-book a private transfer from Catania Airport to the Port of Siracusa with Shuttledirect. 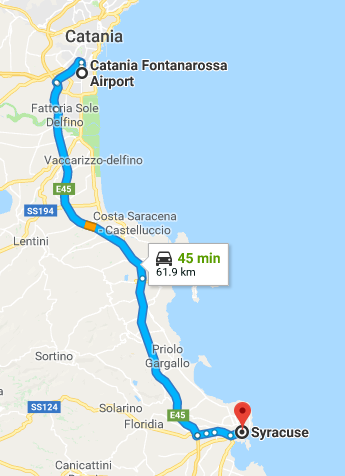 Cruise ships now dock at the new maritime station located on the mainland so passengers have a short walk to the historic Island of Ortygia which was founded by the Corinthians in the 7th century BC. Much of what can be seen today is the result of an extensive rebuilding project which followed the devastating earthquake which destroyed much of the region in the 17th century.

Some of the main sights include the beautiful Cathedral of Syracuse (Piazza Duomo) and the Montalto Palace (Via Dei Mergulensi, 4) together with what remains of the Temple of Apollo (Largo XXV Luglio). A number of other Baroque palaces are dotted around the streets of the historic centre. On the southern tip of the island is Castello Maniace which is a fortress dating back to 1240 which was formerly the home of numerous Sicilian rulers.

Insider Tip: Visitors should make a point of going to the Mercato Di Siracusa which is filled with stalls selling fresh fish, fruit and vegetables. A popular lunch stop is Caseificio Borderi (Via Emmanuele de Benedictis, 6) inside the market which sells take-away sandwiches filled with cheese and cured meats to locals in the know.

Aside from the island of Ortygia, the other main tourist attraction within close proximity of the port is the Neapolis Archaeological Park which lies 2km north-west of the maritime station. This important site is home to a Greek Theatre, a Roman Amphitheatre and a museum dedicated to the Greek mathematician, Archimedes, who was born in Siracusa in 287 BC. 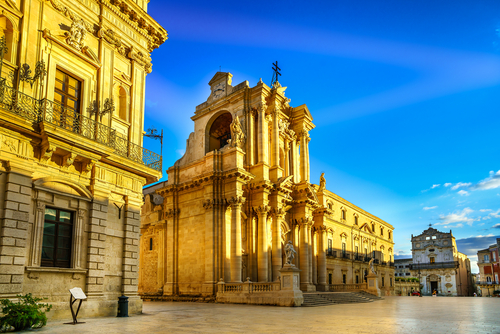 Whilst a visit to Ortygia and the Neapolis Archaeological Park is time well spent and is enough for most visitors, some cruise ship passengers may wish to discover a little more of this region of Sicily. Shore excursions offered by cruise lines usually include some of the following:

Necropolis of Pantalica: Lying 40km north-west of the port, this archaeological site is included alongside Ancient Siracusa on the UNESCO World Heritage List. It is home to more than 5000 tombs dating from the 13th to the 17th centuries BC. Whilst Pantalica can be accessed on public buses via Solarino the official shore excursions or private tours are far more convenient options.

Noto: A picturesque 38km drive along the coast from Siracusa delivers visitors to the Baroque town of Noto which was completely rebuilt following the earthquake of 1693. It too is a World Heritage Site which is home to a selection of stunning churches and palaces. If official shore excursions aren’t available there are public buses to Noto which depart from Riva della Posta on Ortygia.

Modica: Inland from Noto, some 70km from the Port of Siracusa, is yet another UNESCO site which appears as one of the ‘Baroque Towns of the Val di Noto’. Less affected by the earthquake, it boasts a more varied architectural diversity than most of its neighbours including the beautiful Duomo of San Giorgio. Infrequent trains services or long bus journeys to Modica from Siracusa make official excursions or private tours the preferred means of transport.

Catania: Approximately 100km north of Siracusa along the coast is Sicily’s 2nd largest city which stands in the shadow of Mount Etna. This ancient port city is home to a large number of historic buildings constructed by various civilizations going back to the Ancient Greeks who first colonised it. In spite of the distance, Catania is easily reached by train from Siracusa if shore excursions aren’t available from your cruise line. 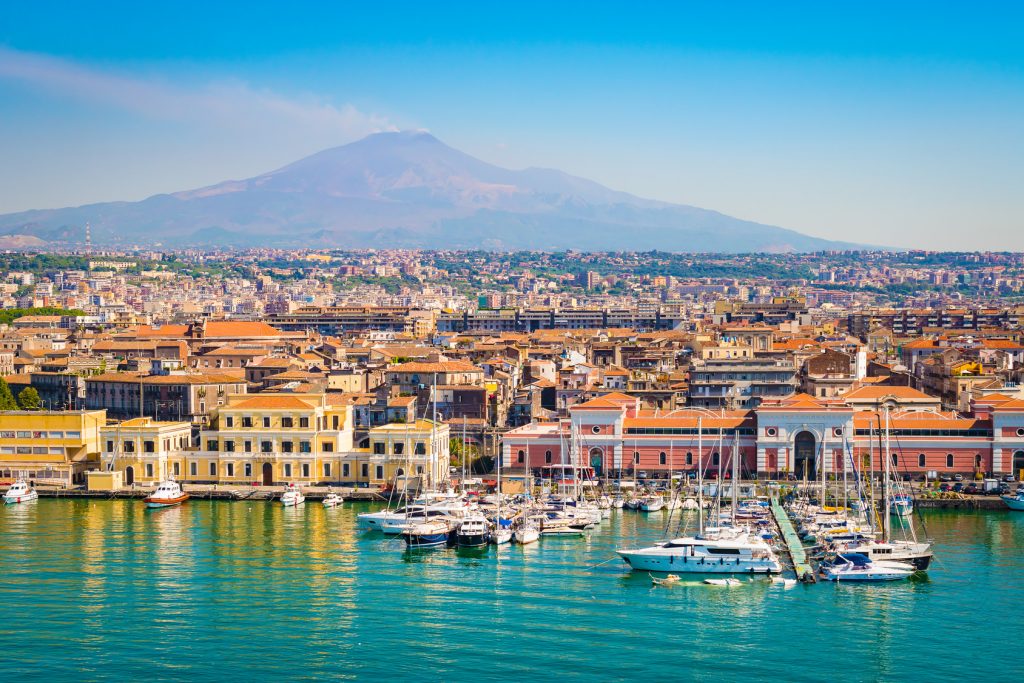