For many Europeans over a certain age it was the Austrian skier Franz Klammer who not only put Austria on the map but also presented skiing as an activity we really ought to try. He won the downhill gold medal at the 1976 Winter Olympics in Innsbruck and was a fixture in our living room in the winter months of the late 1970s as we cheered him on during the weekly BBC TV programme ‘Ski Sunday’. This experience was a key influence in nagging my parents to take us to Austria for our first holiday abroad a few years later to a small, relatively unknown village called Mayrhofen. Today that same village is one of the most popular tourist destinations in the country’s thriving winter sports industry.

The Austrian Tyrol is home to some of Europe’s finest ski resorts where professional skiers take on daunting black runs in official races and non-skiers take their first tentative steps on the piste. The region is highly regarded for its beautiful ski villages, excellent facilities, high quality accommodation and lively après ski which caters to all age groups. Its location in central Europe is well served by a number of international airports including Munich, Innsbruck, Salzburg and Friedrichshafen providing ready access to pristine Alpine skiing for visitors from all over Europe. Two of the most charming resorts amongst the many in the region are Kitzbühel and Mayrhofen whilst Ischgl is a mecca for young people attracted as much by its reputation for wild nightlife as its impressive selection of ski slopes.

Kitzbühel is a beautiful medieval town in the Austrian Tyrol. It lies 90km east of Innsbruck and 130km south-east of Munich with transfer times by road approximately 1hr 15mins and 1hr 45mins respectively. As a ski resort it is well known on the international stage thanks to its annual hosting of World Cup ski events, most notably the terrifying descent of the notorious Streif run on the famous Hahnenkamm mountain. Leisure visitors needn’t worry about such demanding ski runs as there are more than 170km of slopes available in the area which will suit skiers of all abilities. A particular beauty of the region is the way different ski areas have been linked together by an advanced network of ski lifts such that skiers can return to Kitzbühel from as far away as the Thurn Pass on snow rather than having to revert to road transport. 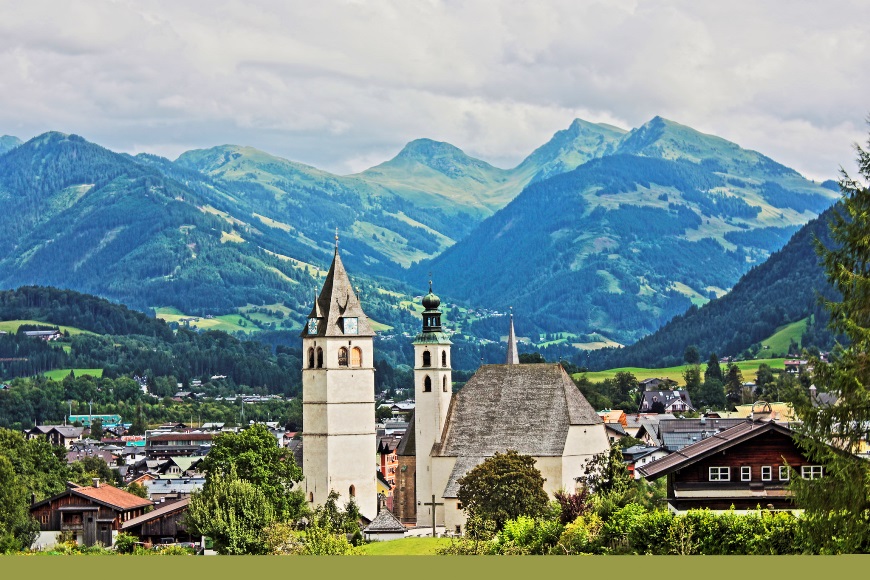 “Kitzbuhel, Tirol, Austria” by geordietyke is licenced under CC BY-NC-SA

For such a celebrated ski destination it’s rather surprising to learn that the resort stands at only 760 metres. In the past this led to the forced cancellation of the famous Hahnenkamm race on three occasions. However, significant investment in snow cannons now guarantees the future of this race. Leisure skiers shouldn’t be put off booking their ski holiday to this delightful resort as it still enjoys adequate snow on its pristine slopes which can be added to whenever the need arises.

In total the Kitzbühel Alps can provide accommodation for more than 10,000 people in a wide range of properties ranging from 5-star hotels to traditional ski lodges. Multilingual ski schools are well represented including the famous Red Devils ski school who employ more than 200 experienced instructors. The resort’s après-ski is highly regarded with a fine selection of bars and restaurants in town together with a handful of nightclubs for those who aren’t planning to be on the slopes too early the next morning.

The Tyrolean town of Mayrhofen stands at just 630 metres, tucked away in the Ziller Valley less than an hour’s drive from Innsbruck (70km) and almost two hours from Munich (160km). Thanks to its proximity to the Hintertux glacier at 3250m there is year round skiing. In winter skiing focuses on the Penken mountain which provides around 150km of slopes covering pretty much every level of difficulty. At one extreme is the famous Harakiri run which is deemed Austria’s steepest run with a gradient of 78% whilst on the other there are gentle nursery slopes up the same mountain. The neighbouring Ahorn mountain is probably preferable for beginners whilst still offering some pretty scary descents for advanced skiers (its black run was removed from the World Cup Downhill for being too dangerous!). 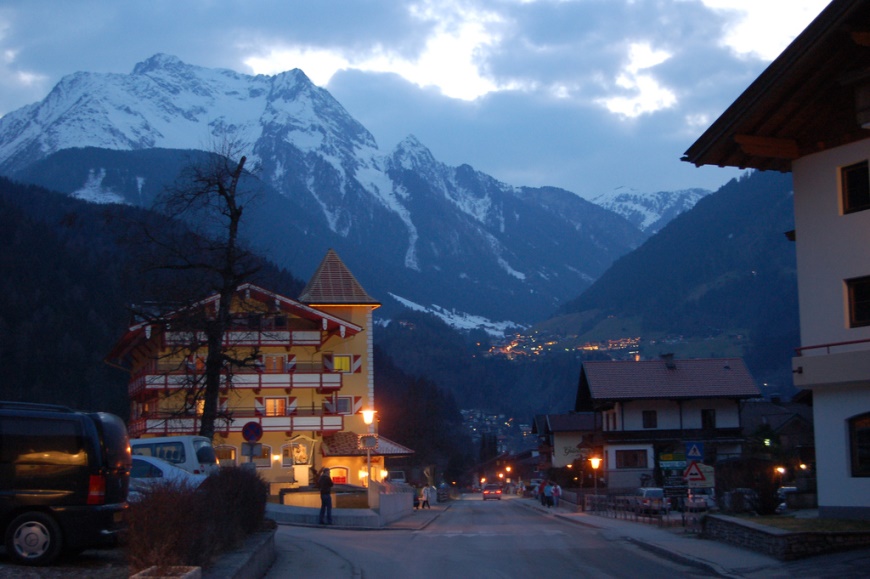 Access to both mountains is straightforward thanks to the gondola in the centre of Mayrhofen which goes up the Penken mountain and the Ahorn Cable car to the south of town which, with space for 160 skiers, is the country’s largest. On bad weather days the latter is transformed into a giant cafe! A common complaint from visitors to Mayrhofen is that the gondola is packed in the morning so you can end up waiting ages to ascend the mountain. To avoid this inconvenience make sure you’re ready to go at 8am and you’ll have no problem, leaving it any later may well leave you with a frustratingly slow start to the day. If you get up late an alternative to waiting in the queue is to head over to the Ahorn cable car which is usually very quiet. Do a few runs there then return to the Penken gondola once the queues have died down. Ski buses are also available to take you to alternative gondolas in the area which will get you up to the same ski areas.

Most slopes lie above 1650m so snow is more or less guaranteed throughout an extended season. On occasions when there is a shortage the vast number of snow cannons come into operation to ensure excellent conditions. Snowboarders are particularly well catered for in Mayrhofen thanks largely to the Vans Penken Park which is the best of all the Tyrolean fun parks which has an exceptional range of jumps on offer. It is suitable for boarders of every level and is a guarantee of major fun.

There’s a fine selection of high quality hotels available and many lovely ski lodges typical of this region. Most notable is the 5-star Hotel Elisabeth which has been tastefully constructed to blend in perfectly with the character of the timber lodges of the town. Plenty more economical options exist such as the Siegelerhof Hotel which offers very reasonable rates on bed and breakfast packages. There’s a more than adequate selection of bars and restaurants spread around the town centre. And for non-skiers or those taking a day off you’ll find plenty to keep you entertained including ice skating and snow shoeing together with toboggan runs (not for the faint-hearted!).

If you value your après-ski right up there with great skiing then Ischgl is probably the resort for you. Located on the Swiss border some 105km west of Innsbruck the road trip takes around one and a half hours. The journey from Munich takes the best part of three hours (Friedrichshafen airport is actually closer). Whilst most of the Tyrolean resorts are attractive destinations for skiers of all ages in terms of day and nighttime activities, it is Ischgl which attracts more than its fair share of young, single people who still have the energy to party late and ski early. Its notoriety as a place to go for wild nightlife coincided with the growing popularity of the ‘Top of the Mountain Concert’ which takes place at 2300 metres and attracts major artists from around the world every year. Robbie Williams was the headline act in 2014. 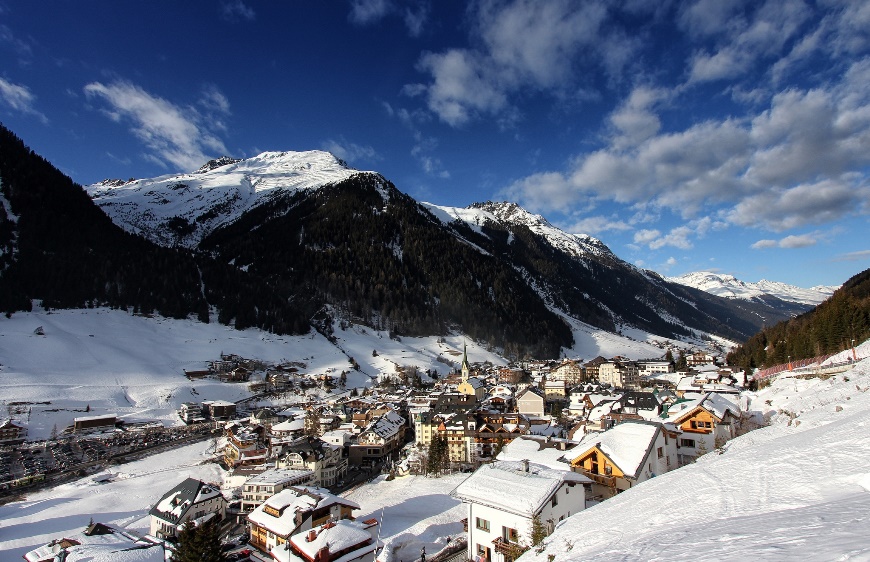 In skiing terms the resort provides access to more than 200km of slopes which attracts skiers of all ability levels and a vast numbers of young snowboarders from all over the continent. You can actually ski across to the isolated Swiss resort of Samnaun though returning with your duty-free shopping may prove a little tricky! Whilst the 5-star Trofana Royal is the resort’s stand out hotel (with prices to match) there are plenty mid and budget options to suit every pocket. If you can avoid engaging in the lively nightlife from too early you should give the popular toboggan run a go as it’s floodlit for evening use.

Getting to Austria’s Ski Resorts

Whilst road and rail links to the Austrian Tyrol are excellent, the availability of numerous airports within proximity of the slopes makes flying the chosen means of transport for many of the region’s visitors. Geographically speaking the Austrian airports of Innsbruck and Salzburg are closest to the Tyrolean slopes but they attract far fewer flights than Munich which is Germany’s 2nd busiest airport and serves as the most convenient gateway to the Austrian Alps for many visitors. You can arrange for specialist ski transfers from Munich to your destination who also provide transport from Innsbruck, Salzburg and Friedrichshafen to all ski destinations.