It’s time! Time to relocate your ski boots to the back of your wardrobe, dust off your summer kit and head to somewhere warm for a week of fun in the sun. And if you’re all fired up from a season of thrills on your snowboard or skis, what better way to keep the adrenaline pumping than by swapping the snow for the surf?

Portugal is well known as a mecca for surfers, and nowhere more so than Peniche. This small fishing village is home to a massive serving of big wave action, with a wide swell window – including Supertubos, which is considered one of the best barrels in Europe.

Want to know what’s on offer in this board rider’s paradise? Get your toes on the nose, because here it goes!

“Almagreira-2” by MarkYourWaves Surf is licensed under CC BY SA 2.0

Located north of the town, in between Lagide and Belgas, Almagreira is a classic beach break with some fantastic left and right peaks. With a steady swell coming from both the north and west you can expect regular impressive swells, with up to two metre tubes and long waves. It’s quite a rocky beach, however, so you’ll need to be on your guard if you plan on surfing around low tide – also when you’re accessing the beach, as there are sometimes rock falls.

Difficulty rating: on the standard surfing scale Almageira rates about a 2-3/5. Great for all skill levels. 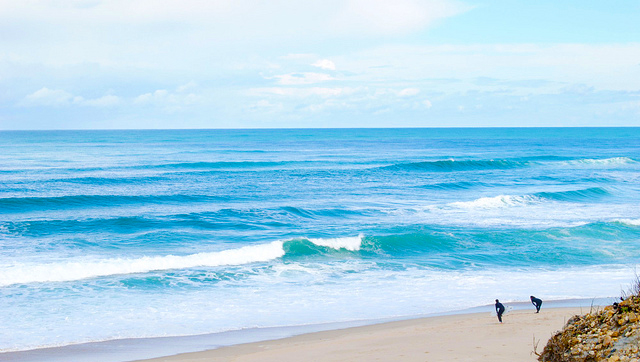 “Peniche-belgas-waves-1” by MarkYourWaves Surf is licensed under CC BY SA 2.0

If you like the feeling of just you against the ocean, Belgas is a great place to come for some alone time. Because of its size, you can really get your own space without danger of anyone dropping in on you, and with plenty of strong and long waves (right and left hand peaks), you can get in some proper quality time on the waves. Situated north of Almagreira, Belgas is the most northerly of Peniche’s surf spots, so there’s a strong northerly swell, with winds coming from the south and the east to create excellent conditions and waves up to two metres.

Rating: 3/5 – a little heady for absolute beginners, but if you’ve got some experience it’s excellent. 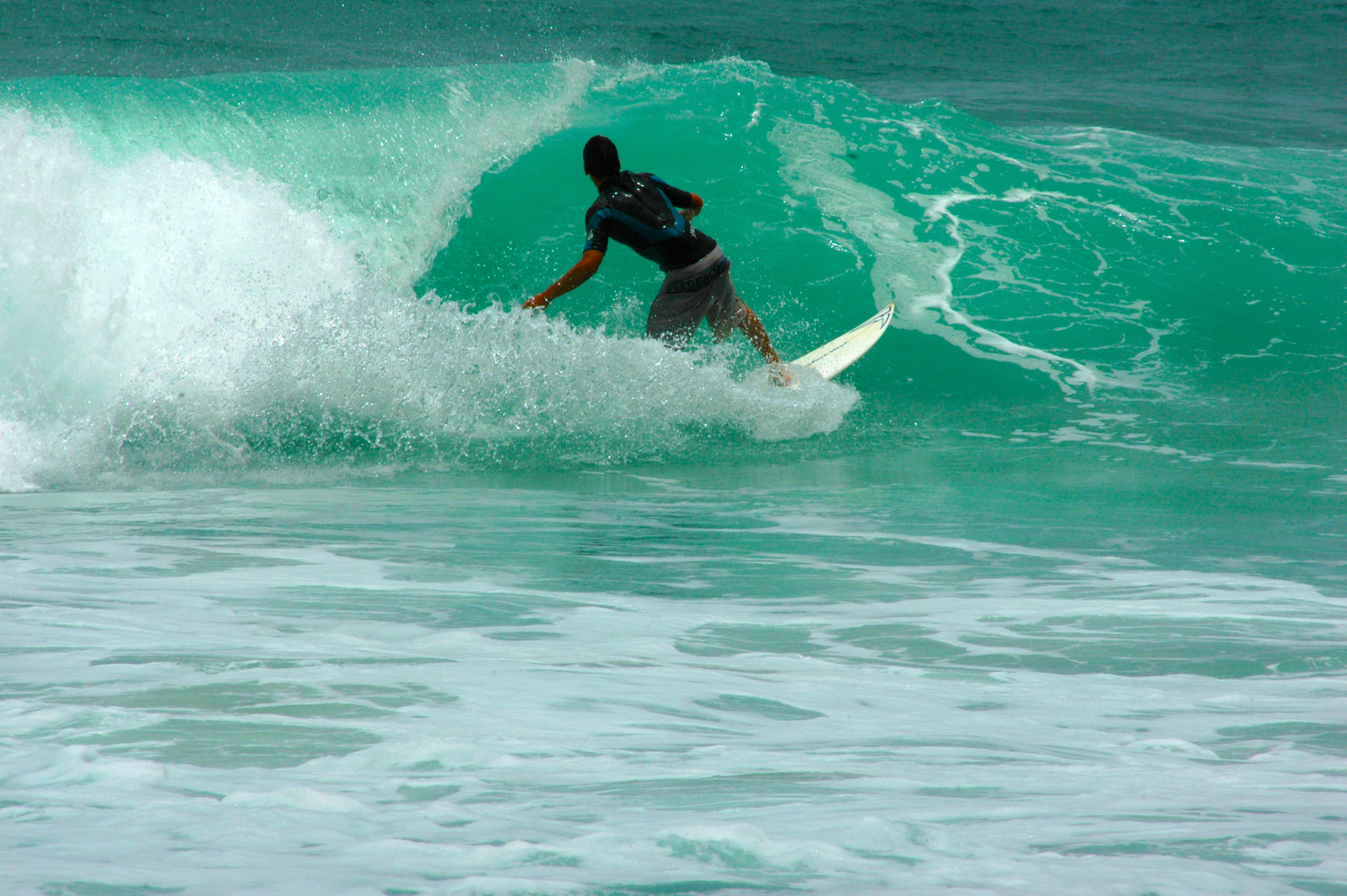 Consolação is the perfect place to pit yourself against some long, fat waves and big swells.

If you’re up for some serious surfing (you know you are!), Consolação is the perfect place to pit yourself against some long, fat waves and big swells. Located just south of the famous Supertubos, with strong west and southeast swell conditions, you can expect to face off to regular three-metre waves at this awesome long-break beach. It’s quite rocky and you’ll need to take care while accessing the beach itself, but what worth doing doesn’t take a little effort? And it’s definitely worth the effort to take on Consolação if you’ve got good skills and a strong constitution!

Rating: 4/5 – an awesome break, but tackle it with your wits about you! 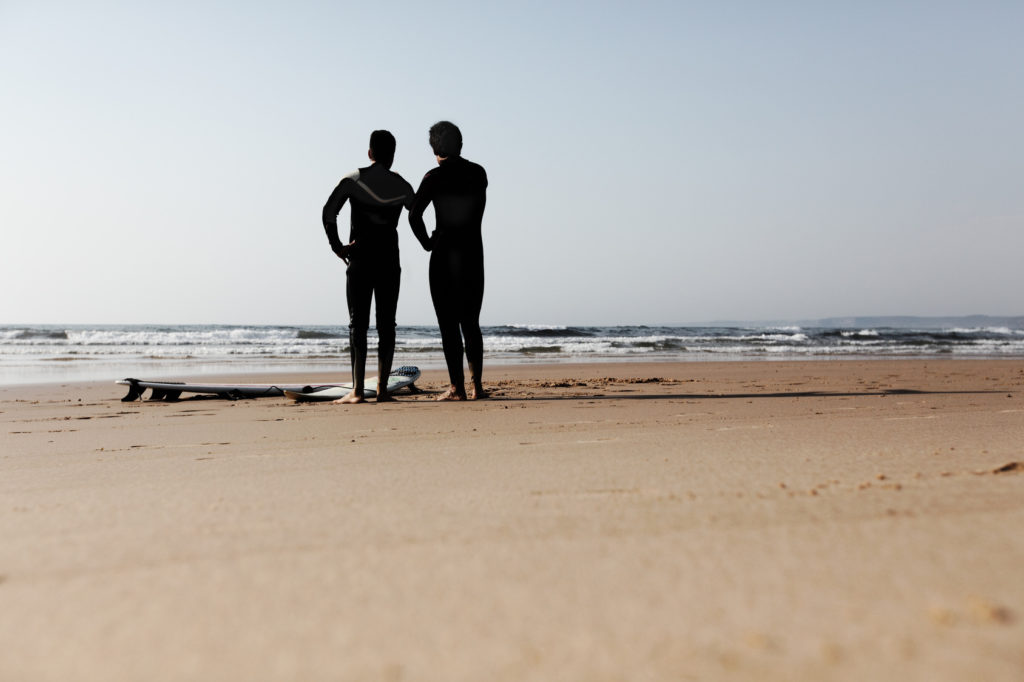 Slightly north of Peniche, Lagide is an unusual, fun, and scrappy break to surf.

Located just north of Peniche, Lagide is an unusual, scrappy break to surf (and lots of fun), but if you’re not entirely confident it might be a good idea to start off at nearby Prainha until you get a feel for the conditions. This is a reef break, with lots of fat left peaks created by the north/north-westerly swells, which are much better at half-tide. The waves here can get pretty intimidating – up to four metres at times – but if you’ve got the skills, you’ll get the thrills!

Rating: 3/5 but conditions can get tricky, so handle with care. 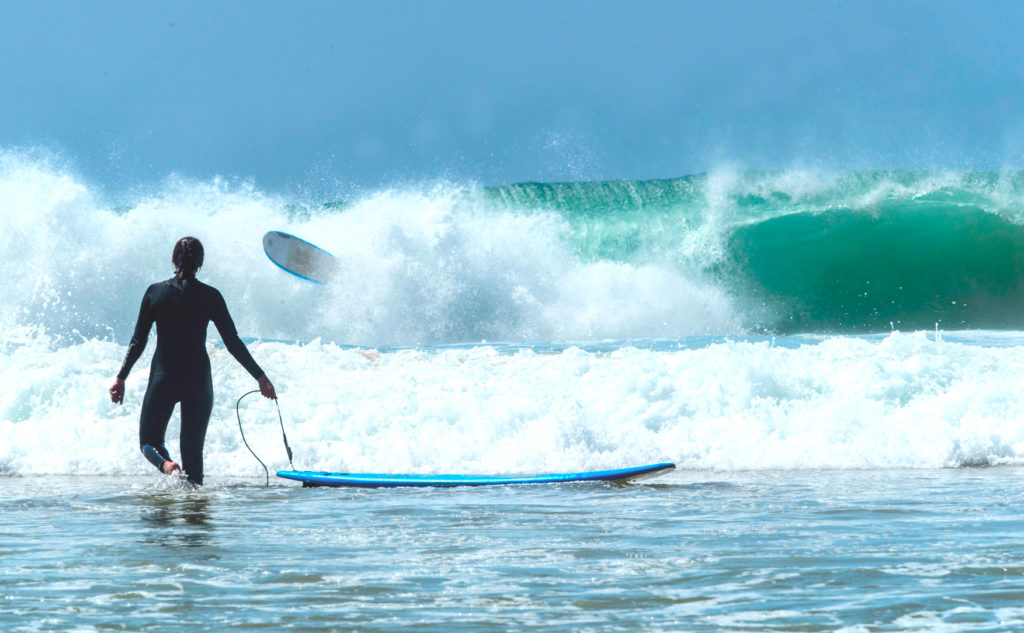 Mohle Lest offers fantastic conditions for both surfers and body boarders.

You really need decent swell conditions to make the most of Mohle Lest but, just like the little girl in the nursery rhyme, when its good, it’s very, very good. The closest of Peniche’s southerly surf breaks, it offers fantastic conditions for both surfers and body boarders, so it’s pretty popular. There are some great tubular sections, and with western and southern swells Mohle Lest often provides waves of up to three big, beautiful metres. It’s also very close to Supertubos, so it’s not far to go if you want to head down the coast to mix it up a little.

Every dedicated surfer knows that the quality of a surfing safari depends entirely on the standard of the conditions in the destination you choose – but if you choose Peniche, rest assured you’re in for a fat old time!

Tip: If you get addicted to the fantastic surf in Portugal (and you will), you might be interested to learn more about Porto, another excellent surfing destination. Next time…

How to Get to Peniche from Lisbon Airport 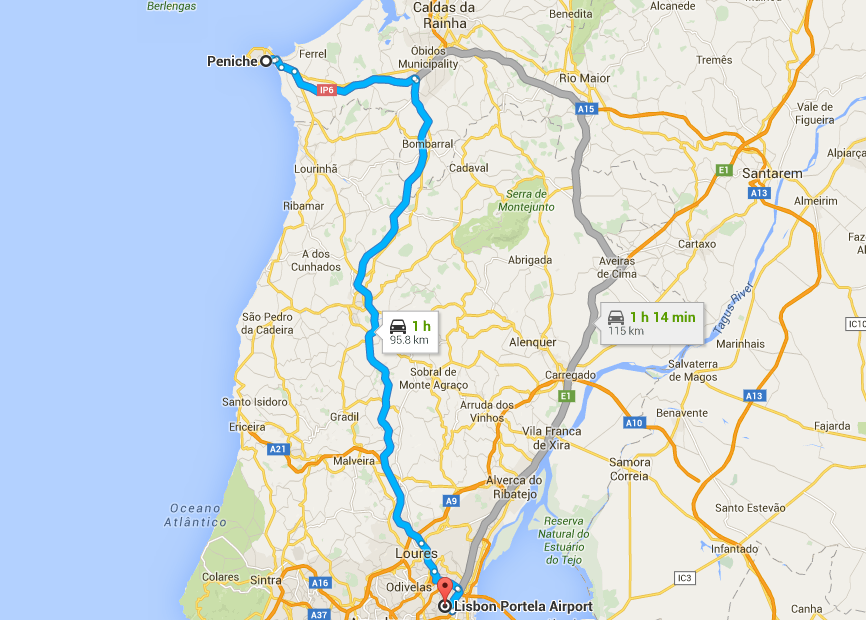 Shuttle Direct’s airport transfers can get you from Lisbon Airport to Peniche in only an hour’s time.

Getting to your surfing safari in Portugal is as easy as making a spur of the minute decision, packing your board and wax, and jumping on a flight to Lisbon. From the UK, flight time is 2.5 hours – so you can fly after breakfast and be surfing before lunch!

Once you land, the best way of getting from Lisbon Airport to Peniche is on a convenient airport transfer. Shuttle Direct offers both shared and private transfers from the airport to your accommodation in Peniche, and your friendly local driver will have you there in around an hour and 20 minutes. If you’re bringing your own board it’s no problem – simply advise us when you make your online booking.

Hotel Pinhalmar – The quintessential surfer’s accommodation, the Hotel Pinhalmar offers a sun-drenched location overlooking the ocean, just a short walk from the bars and cafes of town. When you’re not out carving up the surf, you can be practising your technique in your head with a drink on the terrace, lazing around the outdoor pool topping up your tan, or taking advantage of the Wi-Fi for that other kind of surfing.

Hotel Soleil Peniche – If you’re looking for a stylin’ surfing safari, look no further than the Hotel Soleil Peniche. You’ll have your workspace in sight, with views of two fantastic beaches, and when you’re not out there cruising the barrels you can relax in the contemporary luxury of your laidback surrounds. If you’re back for more, the surf’s always up, and if you’re dipping your toes in the sport for the first time the hotel can organise initiation lessons. Show up and sign up!

MH Villas Do Lago – Lap up the exotic surrounds of the MH Villas Do Lago and make this summer’s surf break one to remember! Situated within arm’s reach of the literal kind of surf break, there’s room to spread out both inside and outside these charming villas. Relax in your choice of two pools, cook up your own feast in the fully equipped kitchenette, and iron out the kinks with a sauna, massage or onsite Reiki treatment. All you’ll need to worry about is which of Peniche’s fabulous surf beaches you’ll choose each day…

Shuttle Direct is the premier provider of airport transfers in Europe and North Africa. Our reputation for fast, friendly and convenient transfers to and from airports, cruise ports, and train stations has put us at the forefront of the industry. With a user-friendly online booking system and the option of both shared and private transfers, we can provide a service to suit no matter what your needs and budget.