As you look towards the Mediterranean Sea from the AP-7 motorway heading north-east from Alicante on Spain’s Costa Blanca you’ll suddenly see the emergence of what looks like a North American city in the distance. Around 30 buildings with 30 floors or more dominate the skyline including the 52-floor Edificio Intempo which is Spain’s highest residential structure and the 50-floor Gran Hotel Bali, Europe’s tallest hotel.

This is Benidorm, the original package holiday resort which attracts around 5 million annual visitors. It is estimated that at any one time there are more than 100,000 tourists in Benidorm with numbers peaking during the summer months when that figure is tripled. In terms of hotel capacity in Europe, only London and Paris have more beds on offer than Benidorm. Quite a far cry from its origins as a sleepy fishing village in the 1960s.

From a tourist’s point of view the resort is split into three parts consisting of Playa de Levante to the east and Playa de Poniente to the west. The Old Town lies just inland from a rocky outcrop which separates the two beaches. Most hotels and the liveliest nightlife are on the Levante side whilst Poniente allows for a more laid-back visit. The quaint, cobbled streets and historic buildings of the Old Town provide quite a contrast to the beach areas.

Back in the 1980s Benidorm was best known for its lager louts and raucous nightlife that attracted the attention of ‘Benidorm Uncovered’ style journalism. The resort became something of a standing joke which failed to attract families due to its poor reputation. Local tourism authorities have gone to great efforts to shake off this negative reputation and have succeeded in making the resort more of a ‘family friendly’ destination. They’ve also managed to encourage many older visitors to book extended stays during the summer months as an escape from the severe winters of Northern Europe.

Benidorm is a holiday resort which will always split opinions, some people love it whilst others hate it. Personally I expected the worst on my first visit but was pleasantly surprised at just how much I enjoyed my stay. One thing’s for sure, you need to give it a try before you can make a judgement. You never know, you might end up like the Garvey family from the hit TV series ‘Benidorm’ and find yourself returning year after year. 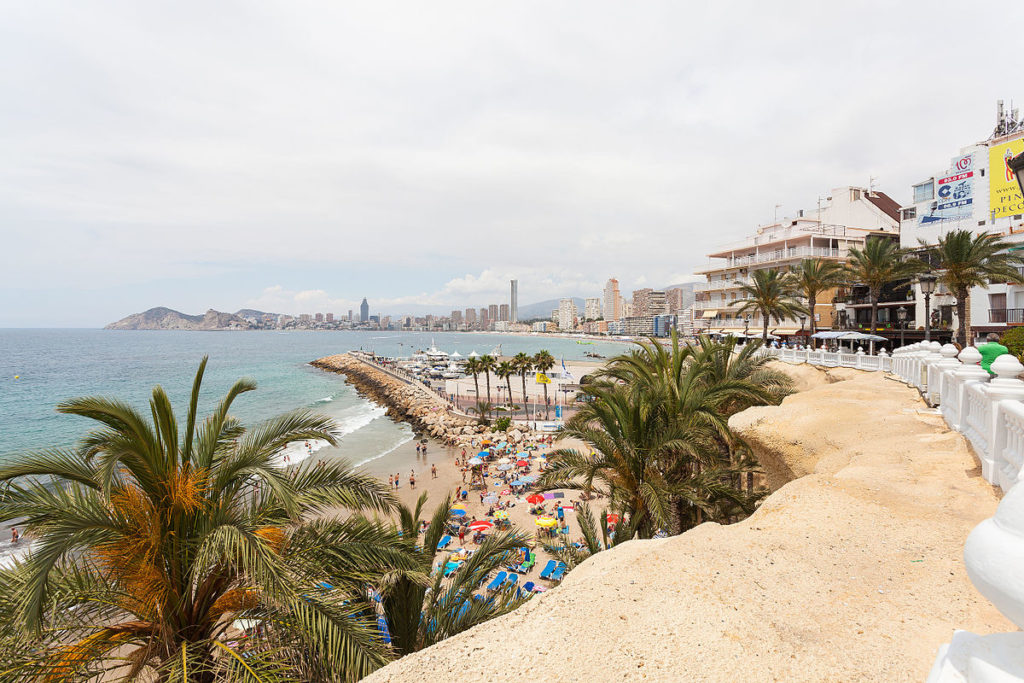 Beaches: The golden, blue flag beaches of Benidorm are glorious with fine, golden sand which is cleaned every night by a small army of workers. Playa de Levante and Playa de Poniente are the main two whilst Playa de Mal Pas is a small, sandy cove below the Old Town.
Theme Parks: Once children have visited Benidorm you’ll have a problem convincing them to go anywhere else thanks to the exceptional theme parks on the edge of town:

Benidorm Palace: This is Benidorm’s premier evening entertainment venue for adults. It’s a great place to enjoy dinner whilst enjoying top performances by a large cast of professional dancers and entertainers.
Excursions: Once you’re ready for a break from the beach and theme parks you’ll find a number of agencies offering a selection of day excursions. A half-day trip to the lovely village of Guadalest in the mountains is highly recommended whilst a full-day excursion to Valencia, Spain’s 3rd largest city, is also popular. If you’d prefer to just do some exploring by local transport then the lovely towns of Altea and Villajoyosa are well worth a visit. 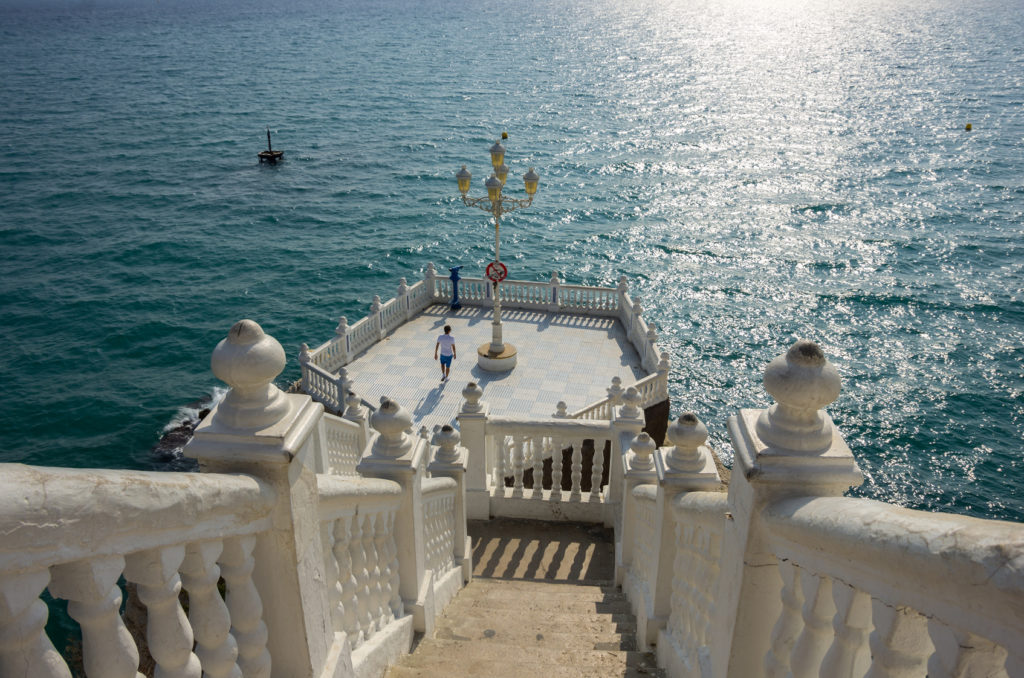 By Road: Benidorm lies just 60km north-east of Alicante Airport, by toll road the journey takes just 40 minutes. There’s no end of taxis awaiting new arrivals and countless car hire desks inside the terminal. Pre-booking a shuttle or private transfer with local operator Shuttledirect tends offer great value for all group sizes.
By Bus: There is a ‘Benidorm Bus’ operated by ALSA which travels from the airport to Benidorm’s main bus station at at Paseo Els Tolls. It departs from the 2nd floor of the airport building.
By Train: There are no trains operating directly from the airport, however, you can travel into the centre of Alicante then hop on the L-1 TRAM service which travels along the coast as far as DÃ©nia. The journey to Benidorm takes about 70 minutes. 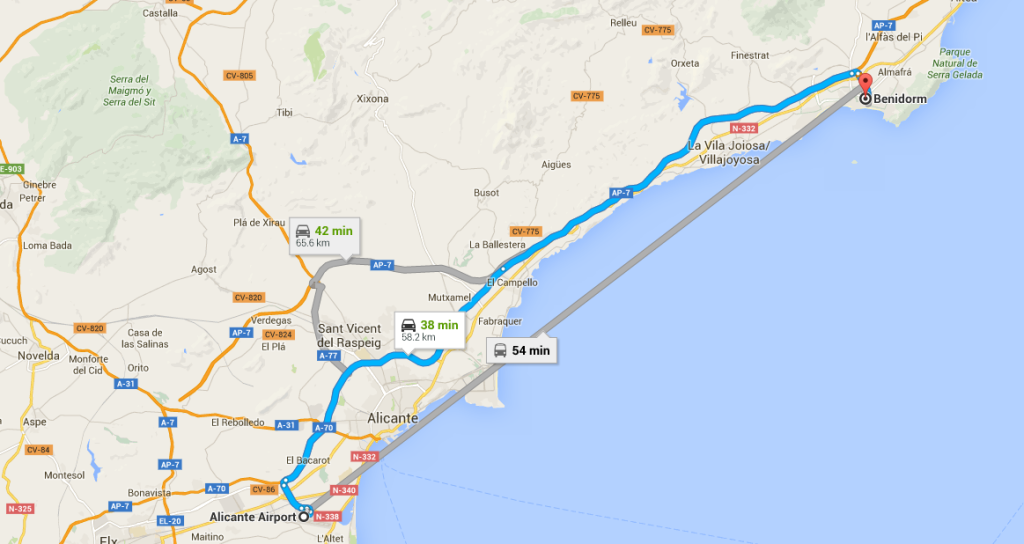 Where to Stay in Benidorm

There are somewhere in the region of 500 hotels and apartment blocks to choose from when visiting Benidorm so it’s quite possible that you’ll discover some great deals by shopping around. Here are a few recommendations according to category :

5-Star – Villa Venecia Boutique Hotel (Plaza San Jaume, 1): This is a luxurious gem of a place located near the Old Town with fabulous views across the bay.
4-Star – Riviera Beach Hotel (Avenida del Derramador, 8): Just a short stroll from Playa de Levante this friendly hotel is a cut above many of the others in this category.
3-Star – Hotel Rocamar (Cuatro Esquinas, 18): A little away from the beaches, this small hotel lies in the heart of the Old Town within a short-walk of the famous ‘tapas alley’.

And finally, if you’re a fan of the ‘Benidorm’ TV series you’ll be disappointed to learn that the Solana Resort doesn’t actually exist. Much of the filming takes place at the Sol Pelicanos Ocas hotel complex. The infamous Neptunes Bar is also fictitious with filming taking place at Morgans Tavern which is just along the road from the Pelicanos Ocas.