Located almost 300km north-east of Ho Chi Minh City at an altitude of 1500 metres, Dalat has been a popular mountain retreat since French colonial times. The ambience of its downtown area provides a reminder of that period thanks in part to the miniature Eiffel Tower which stands there. Visitors come to Dalat to enjoy a few days relaxing in the town’s cool climate whilst taking short excursions to some beautiful natural attractions in the region. Alternatively, the town can serve as a gateway to the Central Highlands of Vietnam which run as far as the border with Laos in the north.

Dalat is a beautiful hill town with a cool climate where visitors can escape the heat of the cities and enjoy a few days of R & R. Centred around Xuan Huong Lake, it is home to French colonial architecture, attractive flower gardens and a popular night market. There are plenty attractions within a short journey of the city but little in the way of earth shattering local sights. The main central landmarks which can be reached on foot include the following: 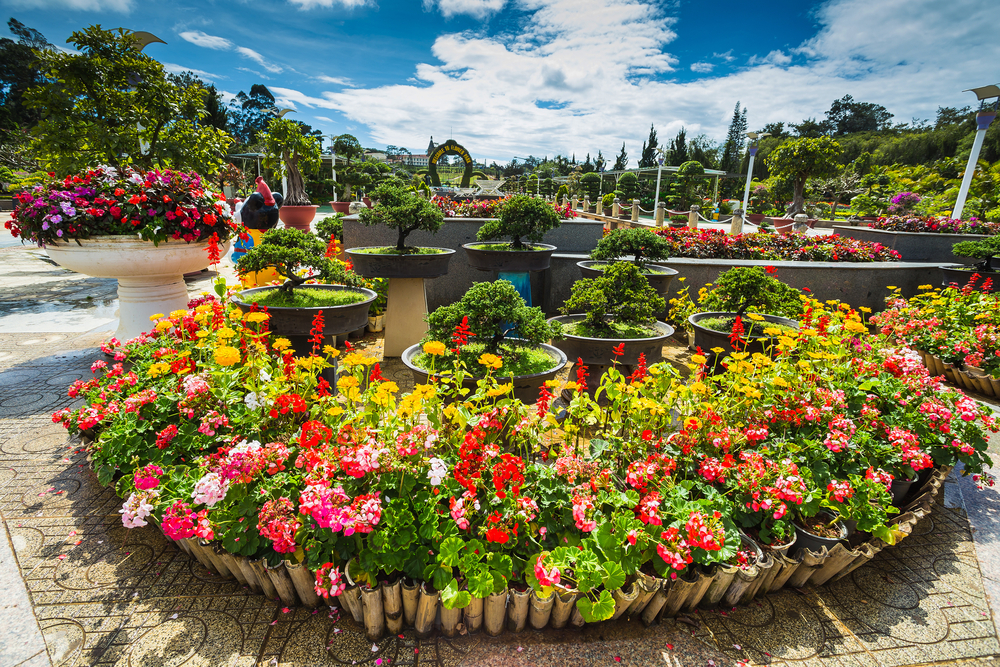 Dalat Flower Park: This whole region of Vietnam is known for its flower gardens with the best example being located just north of Xuan Huong Lake. Seeing everything in bloom during the spring season is the best time to visit but the gardens can be enjoyed all year round.

Bao Dai Summer Palace: Visitors to this summer palace, which lies some 3km west of downtown Dalat, can take a tour of its royal suites. Dating back to 1938, it was built in French colonial style and served as a home for the last emperor of the Nguyen Dynasty. It can be reached on foot or by means of taxi or mototaxi.

French Quarter: Lined with colonial villas dating back to the French colonial period of the late 19th and early 20th century this part of town is a little piece of Europe in Vietnam. 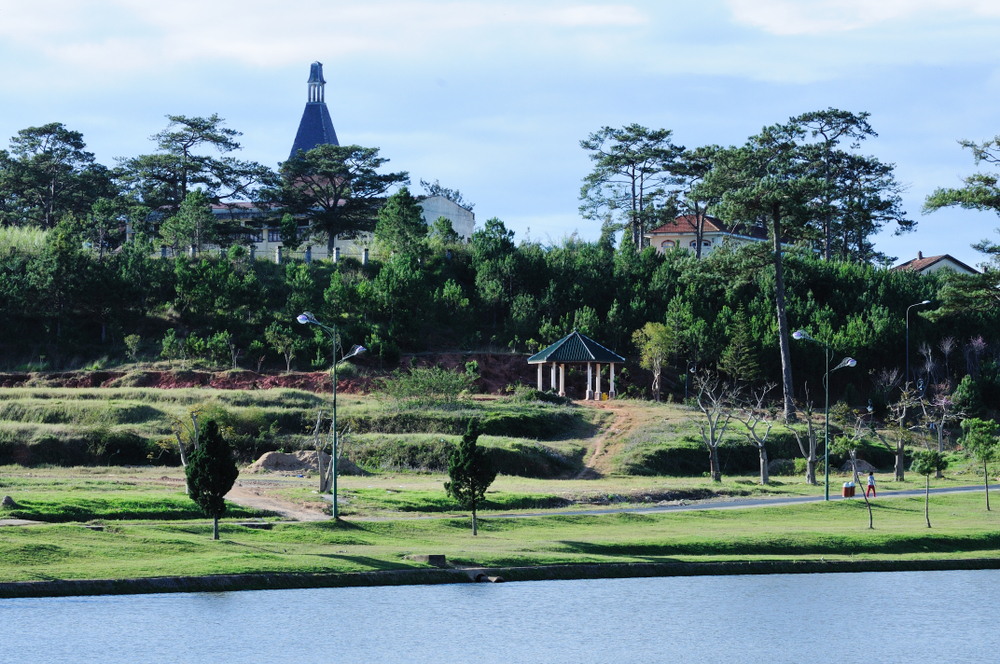 Dalat Railway Station: Built by the French in the late 1930s, this station connected Dalat with Thap Cham on the main north-south rail network. The line was abandoned during the Vietnam War and only in the 1990s was work completed on a 7km stretch which allows tourists to take a short excursion through the beautiful countryside to the village of Trai Mat from where they can visit the Linh Phuoc Pagoda.

Crazy House: Tourists can book a room at the Hang Nga Guesthouse and Art Gallery (as is it’s official name) or simply pay a small fee to visit what is undoubtedly Dalat’s strangest attraction.

Night Market: Taking place every evening from 5pm until 10pm this night market in the city centre is home to numerous stalls selling fresh produce, clothes and handicrafts. However, its biggest attraction for many is the availability of traditional Vietnamese street food on almost every corner.

Most of the area’s main attractions are a short distance outside the city centre and are best reached as part of a day excursion by minibus or on the back of a motorbike. Typical excursions include stops at local villages as well as a silk farm or coffee plantation. The top destination for many such tours is the Elephant Waterfalls which lie some 30km south-west of Dalat. A further 23km leads to the stunning Pongour Falls which are one of the largest in the country. 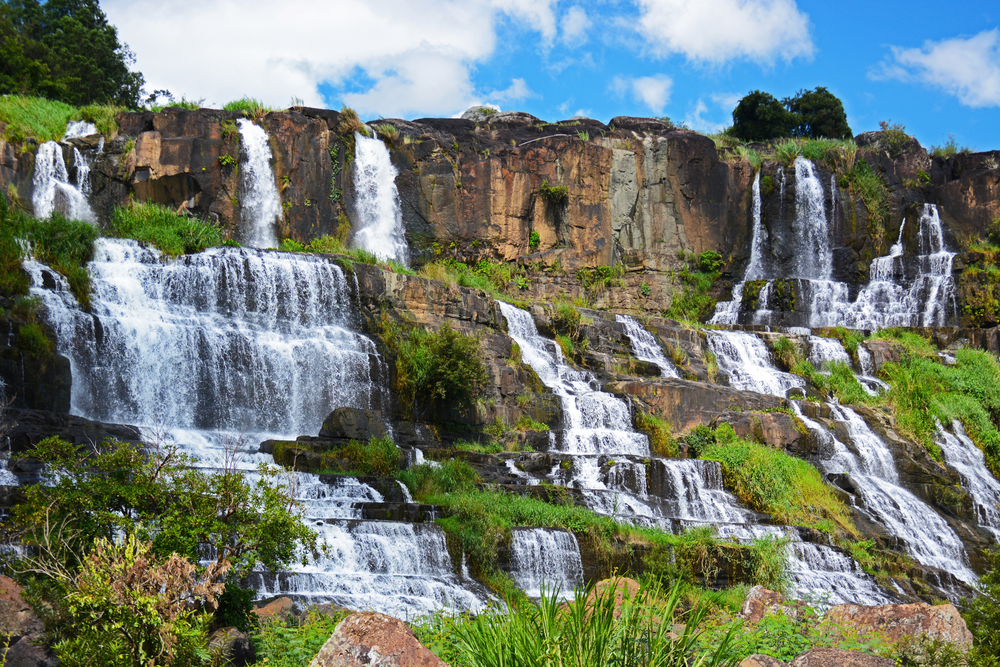 There are more waterfalls which are closer to the city such as the Datanla Waterfall which lie 8km to the south and the Prenn Waterfall which are a further 4km along the same road. Other natural attractions include the scenic pine forests of the Valley of Love which is just 5km north of the city and the Golden Valley which is a further 12km away. Visible from the centre of Dalat is the peak of Lang Biang Mountain which lies 12km to the north and is popular spot for short hikes in the local countryside.

Tuyen Lam Lake lies 10km to the south of Dalat and is a popular recreational area for locals and visitors alike. Near the lake stands the Truc Lam Zen Monastery which is one of the region’s most beautiful Buddhist temples which is best reached on a 2.5km cable car journey from Robin Hill. 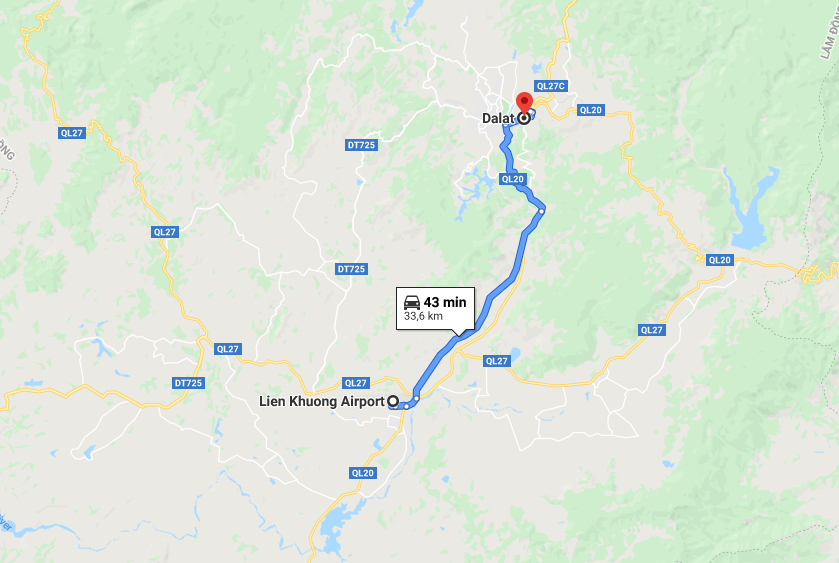 Getting There: Travellers arriving from Ho Chi Minh City and the coast typically travel to Dalat by means of one of the many bus services which are available. The central bus station (13 Nguyen Trai) is within walking distance of many of the city’s most popular accommodation options. Alternatively, it’s possible to fly to Lien Khuong Airport which lies 30km to the south of Dalat. This is the main airport serving the Central Highlands of Vietnam which has daily connections with both Ho Chi Minh City and Hanoi as well as a number of other domestic airports. There are also international arrivals from around the Asian Pacific region including Bangkok, Kuala Lumpur and Seoul.

Airport Transfers: Small shuttle buses operate from the airport into the centre of Dalat but these tend to fill up quickly after a flight arrives. Whilst taxis are usually available it’s a good idea to pre-book a private transfer from Lien Khuong Airport to Dalat and have a professional driver waiting for you on arrival. Transfers are available to all hotels in the city as well as to other destinations in the Central Highlands.

Getting Around: Most of the attractions of the city centre can be visited on foot although taxis and mototaxis ply their trade all over town. A nice way to get around is to rent a bike for a few hours which allows you to get out to some of the sights which lie a short distance from the downtown area. Just about every travel agency and guest house in town is selling day trips to outlying attractions travelling by minibus or on the back of a motorbike. These Easy Rider tours were established long ago in Dalat offering customised day tours or multi-day tours throughout the Central Highlands.

Where to Stay in Dalat: Dalat is packed with affordable accommodation options which range from budget guest houses in the city centre to refurbished colonial villas in the French Quarter which have been converted into luxury hotels.