The city of Trieste lies on the north-eastern coast of Italy near its border with Slovenia. Cruise ship passengers who have visited the great cities of Italy are in for a pleasant surprise when arriving in the Port of Trieste. Standing at a crossroads of Central European cultures the city was part of the Habsburg Monarchy for six centuries before it became part of modern Italy in 1954. As such it is perhaps Italy’s least Italian city being more reminiscent of Prague, Budapest or Vienna than it is of Rome, Florence or Naples.

Cruise ships visiting Trieste arrive at the Maritime Station in the heart of the city centre. This dock can only currently accommodate two vessels at any one time although plans are in place to extend the cruise facilities to allow for the arrival of more and larger ships. Having disembarked, passengers can walk just a few steps to the beautiful Piazza Unita d’Italia which is the city’s main square. 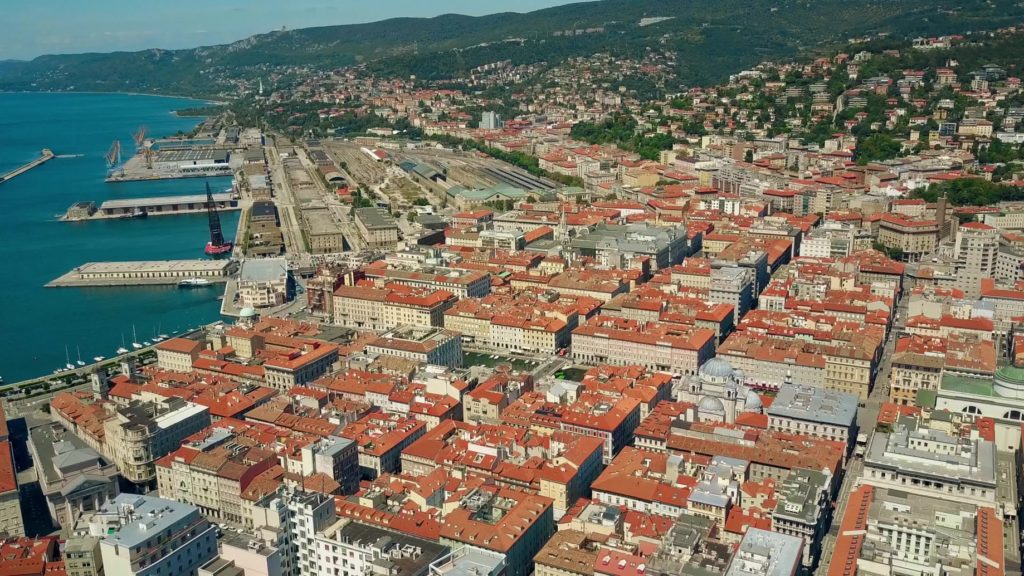 Getting Around: Trieste is a fairly compact city which visitors can easily walk around. The bus network run by ‘Bus Trieste’ is not necessary for getting to any of the main attractions but can prove useful if you want to get to some of the sights located outside the immediate centre. Harbour cruises are available and the tram journey to Villa Opicina on the Carso Plateau from Piazza Oberdan is a pleasant excursion.

Since Trieste became a home port for Costa Cruises and its Costa Luminosa cruise ship more and more passengers have been beginning or ending their cruise in the Port of Trieste. The closest airport for getting to the port is Trieste Airport which is 40km to the north-west. There are only a limited number of incoming flights to Trieste so some passengers choose to fly to Venice Marco Polo Airport which lies 150km away. 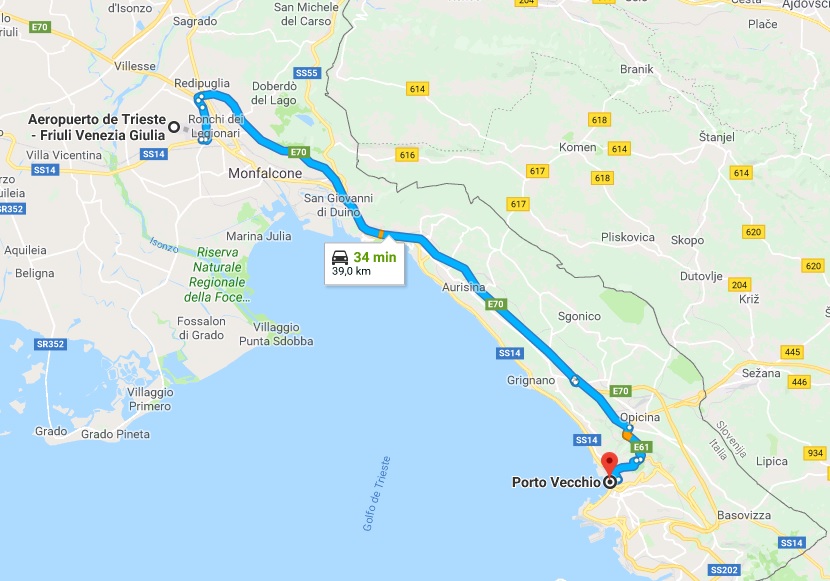 Passengers can travel by bus from Trieste Airport (number 51) to the city’s central bus station which is a short walk or taxi ride from the cruise port. Far more convenient is to pre-book a private transfer from Trieste airport to the port with Shuttledirect. This specialist airport transfer company can also provide transport from Venice Airport if such a service isn’t offered by your cruise line.

Immediately after disembarking from their cruise ships, passengers will wander into the grand Piazza Unita d’Italia which is an instant reminder of Trieste’s long history as a prominent city in the Austro-Hungarian Empire. Surrounded by beautiful buildings and inviting cafés, this is a great place from which to begin a self-guided walking tour of Trieste.

Just east of this main square at the bottom of San Giusto Hill lie the remains of a well preserved Roman Theatre which dates back to the 1st century AD. This hill was the site of the original Roman town which is now home to San Giusto Cathedral and Castle from where views over the city and out to sea are quite spectacular. The climb to the top through the winding streets may prove a little challenging to some but is well worth the effort.

For a nice place to enjoy lunch head for the Grand Canal which is a 10 minute walk along the seafront to the north from the main square. Surrounded by bars and restaurants this was a popular haunt of James Joyce who lived in the city for 15 years. The footbridge crossing the canal is named in his honour. 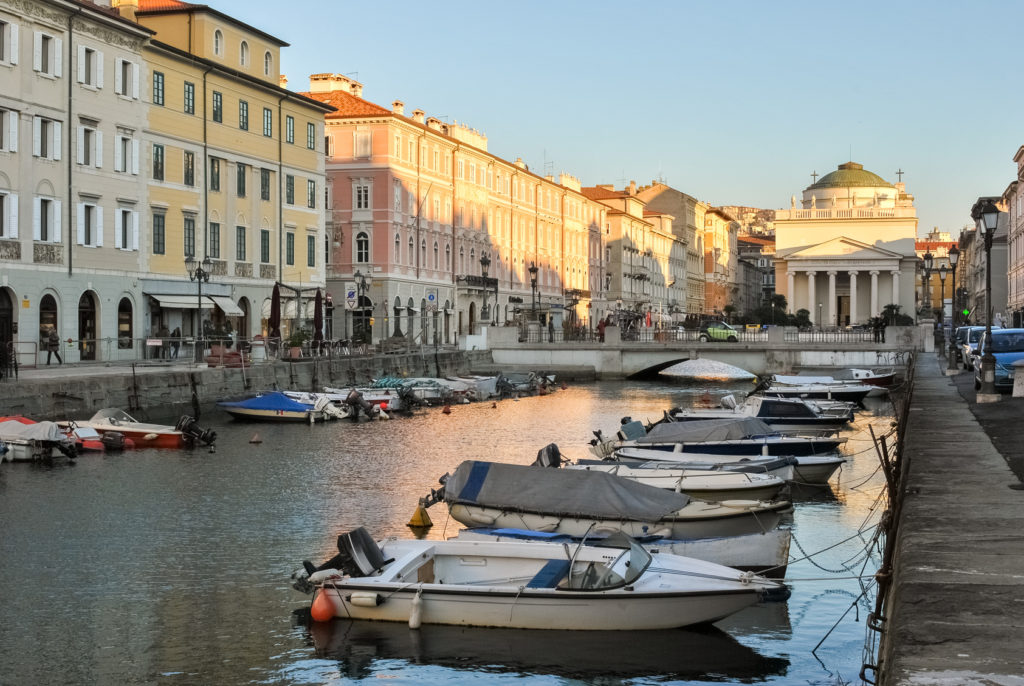 Insider Tip: An essential stop during your day in port is at one of the city’s grand old cafés. These establishments once served as the chosen meeting places of local politicians, writers and academics. Indeed James Joyce himself is known to have been a regular customer of Café¨ San Marco (Via Cesare Battisti, 18).

Next to the cathedral, the Museum of History and Art (Piazza della Cattedrale, 1) is well worth a visit to see an impressive collection of artefacts discovered locally from across the ages. Art enthusiasts should also visit the Revoltella Museum (Via Armando Diaz, 27) near the port which houses works by 19th century Italian artists within the walls of the founder’s former home.

Trieste has a long history of Jewish settlement dating back to 1236 and is home to the Synagoga de Trieste (Via San Francesco d’Assisi 19) which is the largest in Europe. Some 5km south of the port area is the Risiera di San Sabba Museum (Via Giovanni Palatucci, 5) where the horrors of a Nazi concentration camp have been left for all to see.

Whilst there’s no need to leave the lovely city of Trieste during a day in port there are a number of nearby attractions which are well worth a visit. Located 8 km along the coast to the north-west of the port is Miramare Castle which was built as a home for Austrian Archduke Ferdinand and his wife. Completed in 1860 it is a classic example of an aristocratic residence in the time of the Austrian Empire. 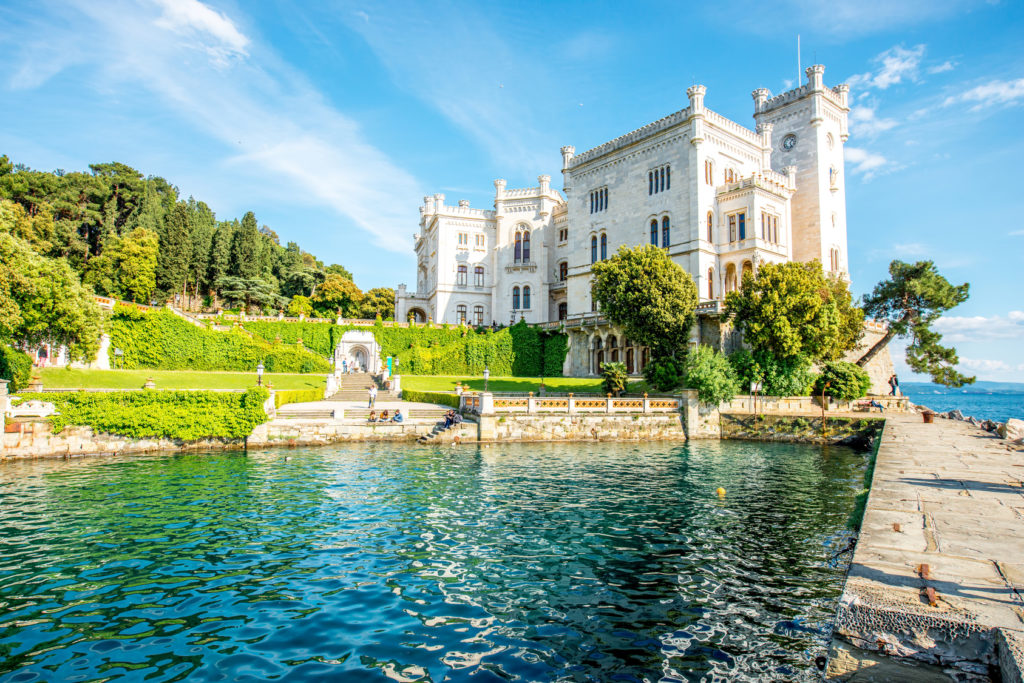 Just 15 km inland from this castle is the Grotta Gigante which is recognised as the world’s largest public cave. It is connected to the Skocjan Caves in neighbouring Slovenia which have been designated as a UNESCO World Heritage Site.

Further along the coast is the older Duino Castle which lies 20 km from Piazza Unita d’Italia. This 14th century structure overlooking the Gulf of Trieste was also a residential property owned by wealthy local families.

Still further afield lies the World Heritage Site of Aquileie which is an ancient Roman city located some 53km north-west of the port. In its day this was one of the Roman Empire’s largest and wealthiest cities in the whole Mediterranean region. Visitors can walk around this enormous archaeological site and should find time to see the 11th century Basilica di Santa Maria Assunta in the town centre and the National Archaeological Museum (Via Roma, 1).