Located on Spain’s Atlantic south-west coast, Cádiz is one of Europe’s oldest cities. Founded around 1104 BC by the Phoenicians it has always had a close relationship with the sea serving as a crucial port to the Carthaginians and Romans. Christopher Columbus sailed out of Cádiz on two of his expeditions to the Americas and the city was designated as home for the Spanish treasure fleet. Not only did this attract the attention of Barbary pirates but also of Spain’s enemies, most notably the English, whose naval fleet under Sir Francis Drake (amongst others) attacked the harbour on numerous occasions. In later years the port would play an important role in the Napoleonic Wars, most famously at the Battle of Trafalgar.

Today Cádiz is well known as a fairly typical Andalucían city with a thirst for life. Its friendly residents, known as ‘gaditanos’, welcome more than 400,000 cruise ship passengers who arrive in the city every year at the new cruise ship terminals located right in the heart of the city centre.

Cruise ships arriving in Cádiz dock at the cruise ship terminal which is right in the heart of the city’s historic centre. Just step outside the terminal and you’re on Avenida del Puerto which is within walking distance of all the main tourist attractions including the city’s main square, Plaza de San Juan de Dios, which is just 600 metres to the left. This is a good place to stop for a coffee where you can get your bearings before taking a walk around the main sights. You can get free city maps at the tourist information office in the terminal building. On the odd occasion when ships are forced to dock further away a free shuttle bus is provided to take passengers to the cruise terminal.

There is no airport in Cádiz so if you are beginning or ending your cruise here your best option is travel via Jerez Airport which is about 40 minutes away by road. You can pre-arrange transfers from Jerez to Cádiz with Shuttledirect. Unfortunately, there are only a limited number of international flights arriving in Jerez so you might have to consider Seville Airport (130km), Gibraltar Airport (120km) or even Malaga Airport (225km). 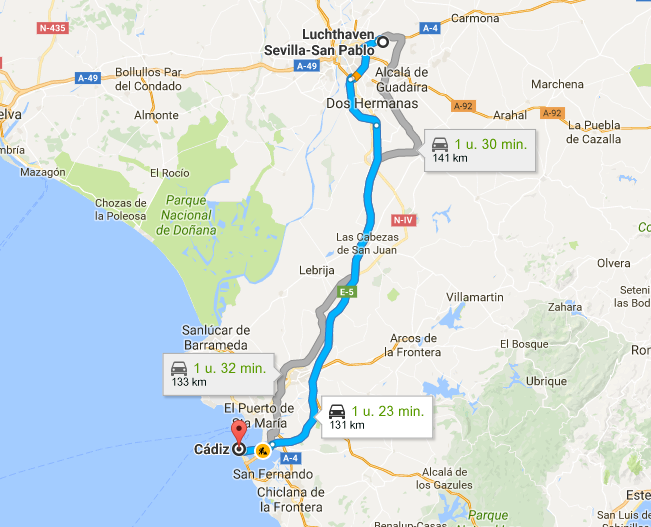 Getting Around in Cádiz

On Foot: If you decide to stay in Cádiz rather than taking one of the full day excursions to destinations such as Seville, Jerez de la Frontera or Gibraltar you should begin at the tourist information office inside the cruise terminal. As well as a city map, try to get a copy of their leaflet listing walks through Cádiz. These colour coded walks are a great way to discover the city with the routes clearly marked as you walk around.

By Bus: Just outside the port area there is a bus station but taking a city bus means you’ll miss most of the main attractions as they lie mainly within pedestrianised areas which aren’t accessible by public transport. Some cruise passengers who don’t wish to walk around the city like to make use of the hop-on, hop-off bus service which departs from right outside the terminal. However, the same limitation applies as this bus cannot access the tiny streets in the centre so its route with 12 stops follows the road around the outside of the city which means you have to get off and walk to most sights.

By Train: Passengers heading on day trips outside Cádiz will no doubt have arranged private transport or will be travelling with the cruise line’s official shore excursions. Alternatively, you can walk to the train station along Avenida del Puerto in less than 10 minutes from where trains depart for Seville. Considering this journey will take approximately 2 hours in each direction this option cannot be recommended when you have limited time in port. 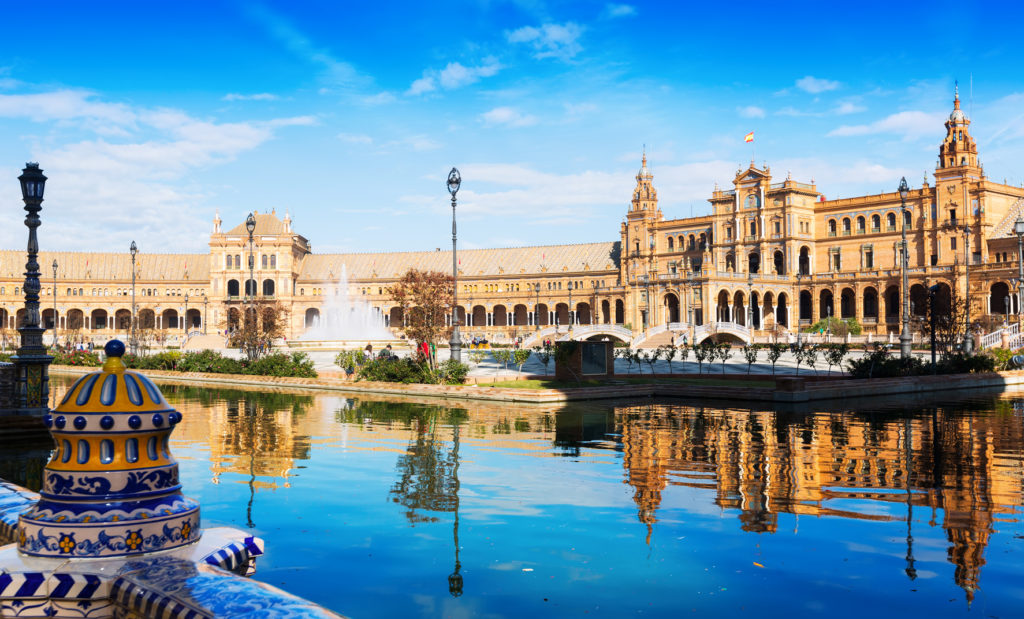 You won’t be disappointed if you decide to stay in Cádiz rather than rushing off on a full-day excursion. The city is very compact with a fine selection of beautiful buildings, historic squares and a sandy beach within its confines. The first attraction you’re likely to see as your ship approaches its dock is the golden dome of Cádiz Cathedral which dominates the skyline. Construction of this baroque-style building began in 1722 and took more than 100 years to be completed. Visitors can climb the Levante Tower for great views over the city. Another great spot for city views through their ‘Camera Obscura’ is the Torre de Tavira (Calle Marqués del Real Tesoro, 10).

Insider Tip: For a great tapas lunch make your way to La Tabernita (Virgen de la Palma, 32) which is in a typical neighbourhood full of local eateries. Alternatively, make your way to the busy Mercado Central (Plaza Libertad) where you can wander around the many fresh food stalls before enjoying a light lunch at one of the cafés-bars. 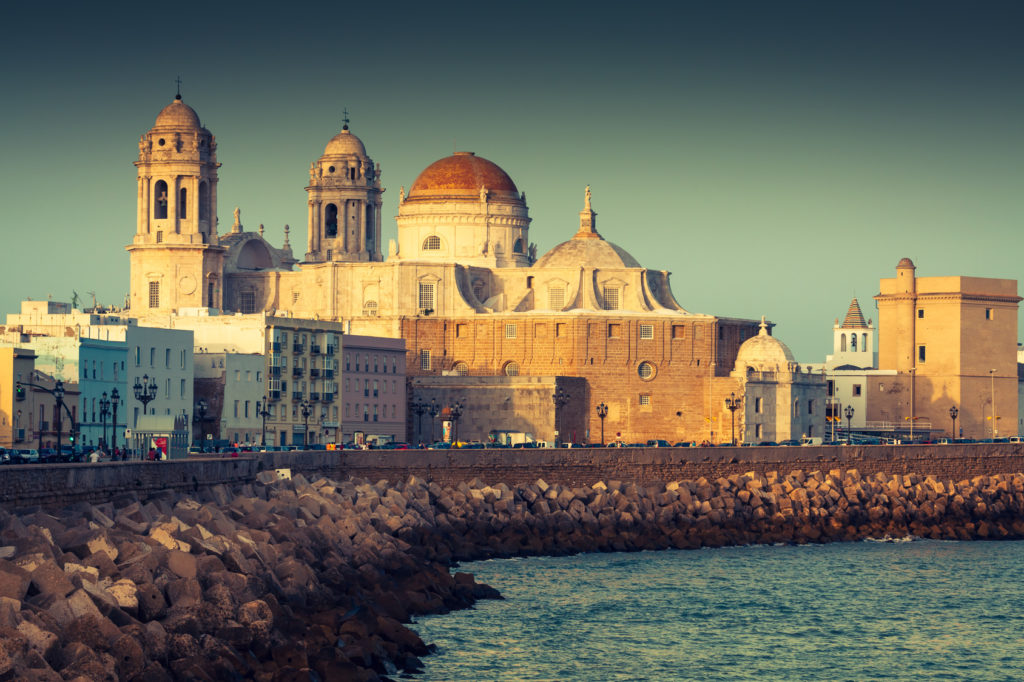 There are abundant ‘plazas’ scattered around the historic centre where you can sit at terrace cafés bars and watch the world go by. One of the most important is the Plaza de España which you’ll come across as you leave the port area. Its main feature is a large monument which commemorates the signing of Spain’s first constitution in the city in 1812. Two others to look out for on your stroll are San Juan de Dios which is home to the 16th century City Hall building and Plaza de San Antonio where you’ll find the 17th century Church of San Antonio.

An historic site that you shouldn’t miss if you get the chance is the city’s remarkable Roman Theatre (Calle Mesón, 11-13) which was only discovered in 1980. Built in the 1st century BC with an estimated capacity of 20,000 it is considered to be the 2nd largest Theatre in the Roman Empire after Pompeii. Ongoing renovation work means that this site is far from the tourist attraction it may well become one day but it is still worth a visit if you can use your imagination.

Located on the very west of the Cádiz peninsula, La Caleta Beach gets packed with locals during the summer months. It’s a lovely place to go for a dip after a few hours’ sightseeing before returning to your ship. An interesting attraction at the north-western edge of the beach is the 16th century Castillo de Santa Catalina from where you can walk along the great defensive walls and get great coastal views. Another fortress of interest is El Castillo de San Sebastián which you’ll find on an island at the end of the beach. 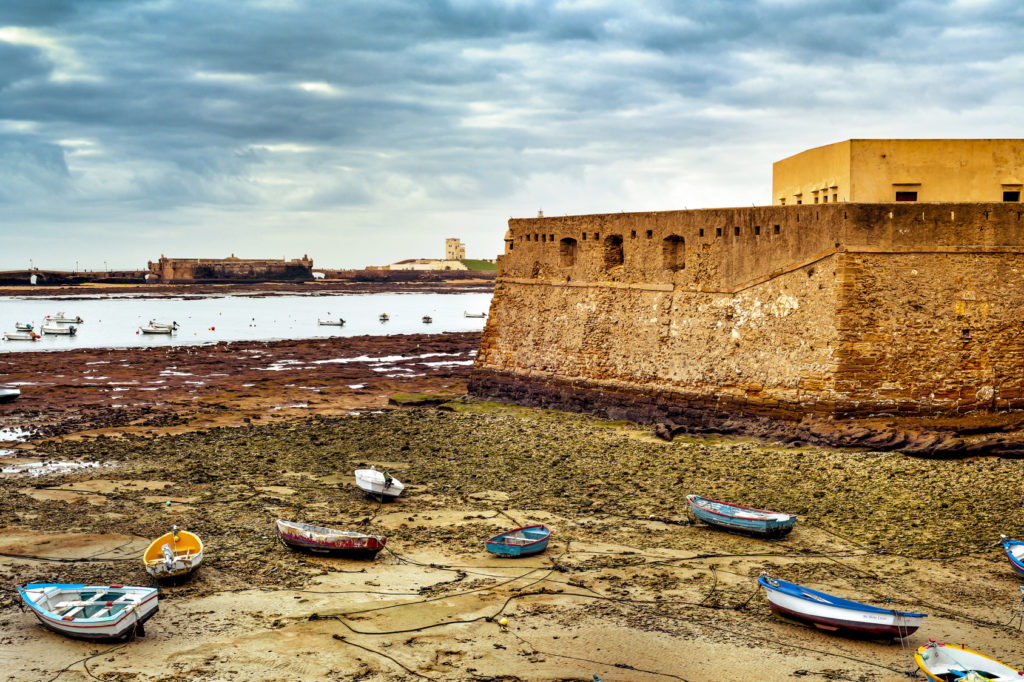 Seville: The number one shore excursion from Cádiz Port is to the city of Seville which lies 120km to the north. No matter how you decide to get there your time will be extremely limited as there simply isn’t enough time to visit all the magnificent sights of what is one of Spain’s most beautiful cities. Arguably the three main sights that you should try to see are the Cathedral, the Alcázar and the Plaza de España, all of which would be included in organised city tours. Just a few hours in the capital of Andalucía will no doubt convince you that you’ll have to return again soon.

Jerez de la Frontera: A less time consuming excursion is to the world’s sherry capital of Jerez which lies just 35km north of Cádiz on the way to Seville. The two main activities for cruise passengers who select this option are a winery tour and a visit to the Royal Andalusian School of Equestrian Art where (with advance planning) you might be able to see a performance by their famous dancing horses. 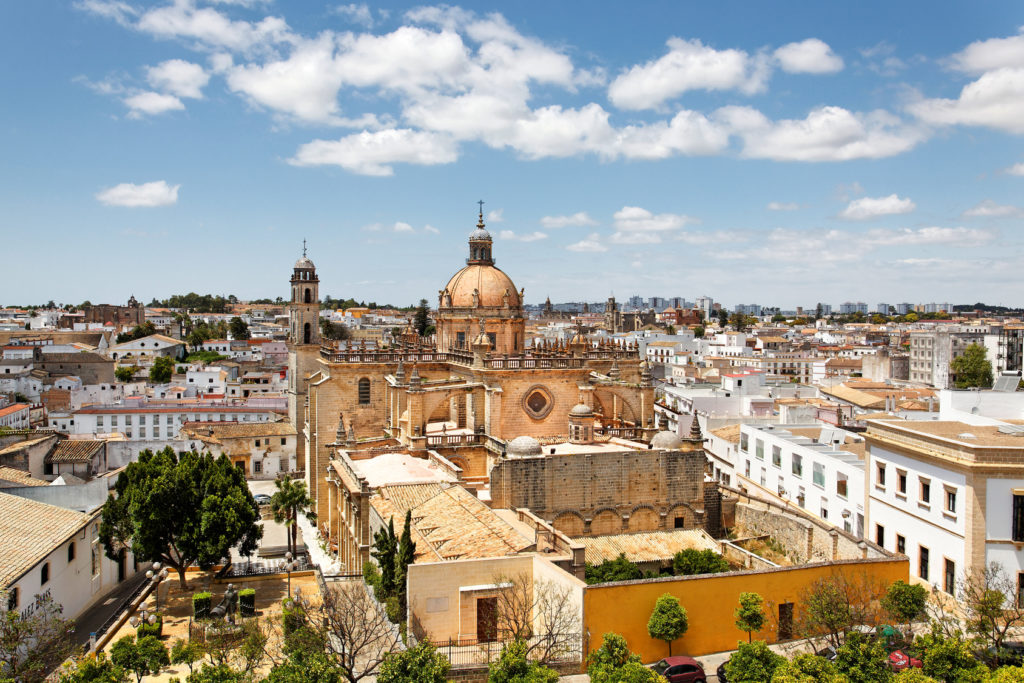 One Night in Cádiz

If you are fortunate enough to be able to spend a full evening in Cádiz be sure to head for La Caleta Beach in the early evening to witness a truly spectacular sunset. Then head for one of the city’s open-air terrace restaurants where you can enjoy some typical local dishes such as ‘tortillas de camarón’ accompanied by a few glasses of Manzanilla wine from nearby Sanlúcar de Barrameda.

A charming recommendation is the lively Taberna El Tío de la Tiza (Plaza Tío de la Tiza) which is a really popular haunt with the locals. It is best known for its excellent seafood dishes. If you’d prefer a more cultural experience you should check out what’s on at the Gran Teatro Falla (Plaza Fragela) which hosts all kinds of performances throughout the year.