First noted as a settlement as early as 49 BC, Bergamo in northern Italy’s Lombardy region is a city steeped in a rich, fascinating history, perfectly preserved through the ages.

Bergamo was a key strategic city first for the Romans then the Lombard duchies, Charlemagne and eventually for the Venetian Republic; each of these great civilisations left their mark on the city. Today it still boasts a plethora of rich historical architecture, making it a unique and enthralling place for visitors to explore. 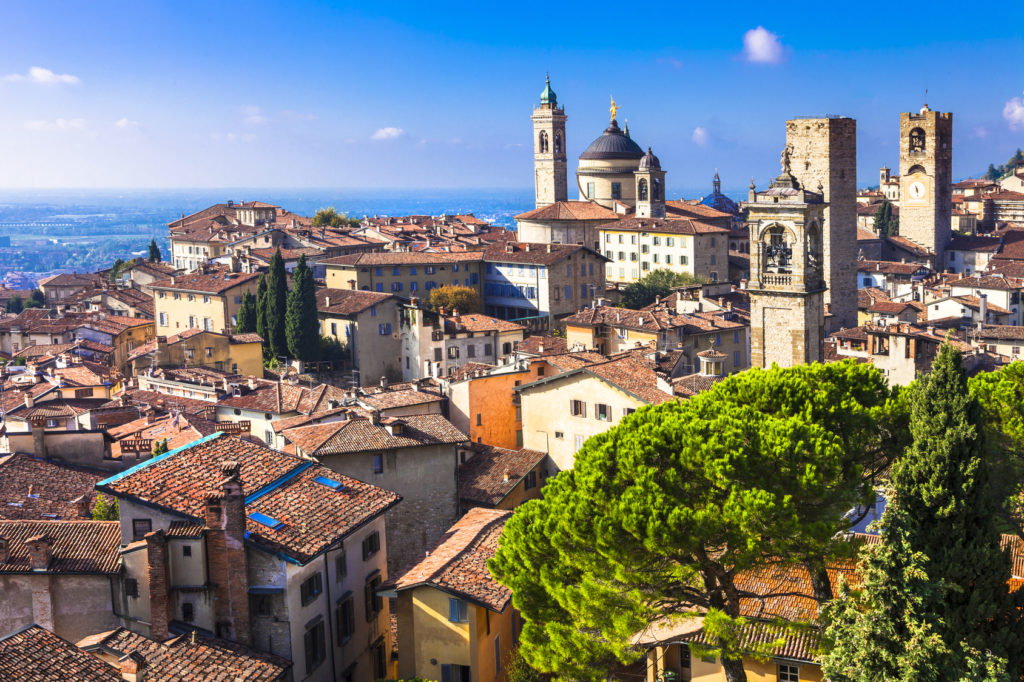 The first thing you’ll notice when you visit Bergamo is that it is actually two cities in one. The new, relatively modern, Città Bassa (Lower Town), lies at the bottom of the city’s hillside, while the beautifully-preserved walled old town, the Città Alta (Upper Town), remains virtually unchanged since medieval times on the plateau above. The two are connected by a funicular which takes you easily up the hillside and into the Upper Town.

Things to See in Città Alta

Once you pass through the medieval city walls which encircle the Città Alta, built by the Venetian Republic to protect it from invasion, you will feel as though you’ve stepped back in time. You’ll love losing yourself in its enchanting winding, narrow medieval streets, historic buildings and pretty squares.

Probably the best place to start your exploration of Bergamo Alta is in the beautiful Renaissance square at the heart of the old town, Piazza Vecchia. Built during the city’s duration as part of the Venetian Republic, the square is surrounded by Renaissance palaces like the Palazzo della Ragione. 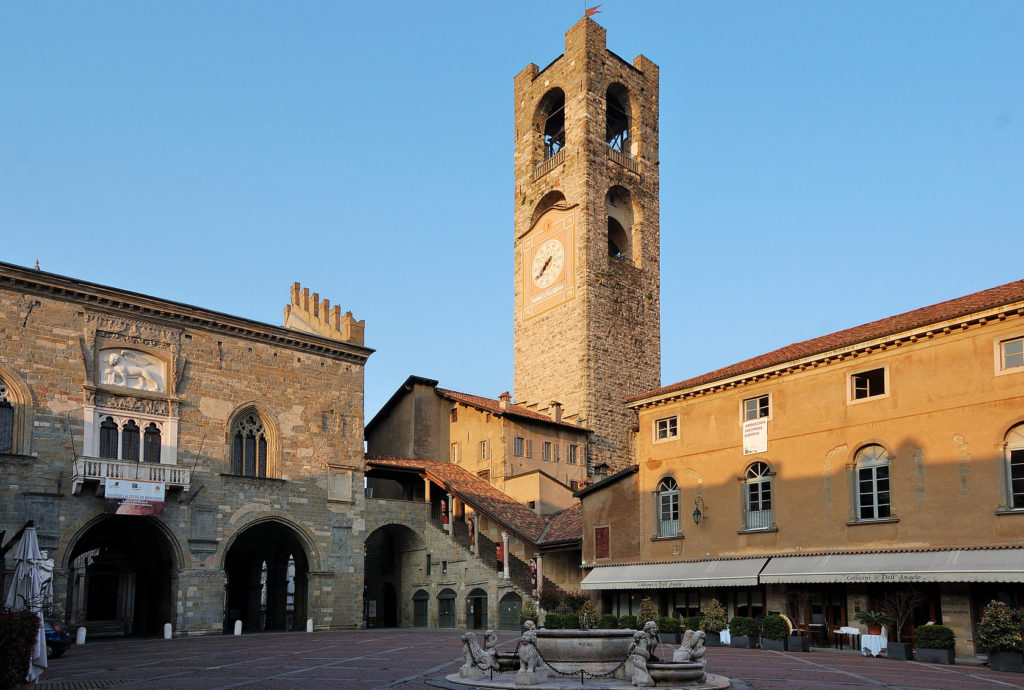 The famous Fontana Contarini, the fountain at the heart of the square, was built by the Venetians as a way to provide residents with a drinking source right at the city’s centre. There is also a medieval sundial used by the locals to track time and even which sign of the zodiac they were in.

Take time to visit the Torre del Campanone, the bell tower which still tolls one hundred times at 10pm as it did in the past to let residents know that the city gates were closing. The lift will take you to the top, 52 metres up, which offers spectacular vistas of the town and the Lombard plains and pre-Alps beyond.

Travelling on from the Piazza Vecchia, you will discover the Piazza Duomo, Bergamo Alta’s religious quarter. Here you will find the charming baroque Duomo; Roman remains were uncovered here during recent renovations to the cathedral, suggesting there has been a sight of worship here since the very earliest times of the Christians in Italy. 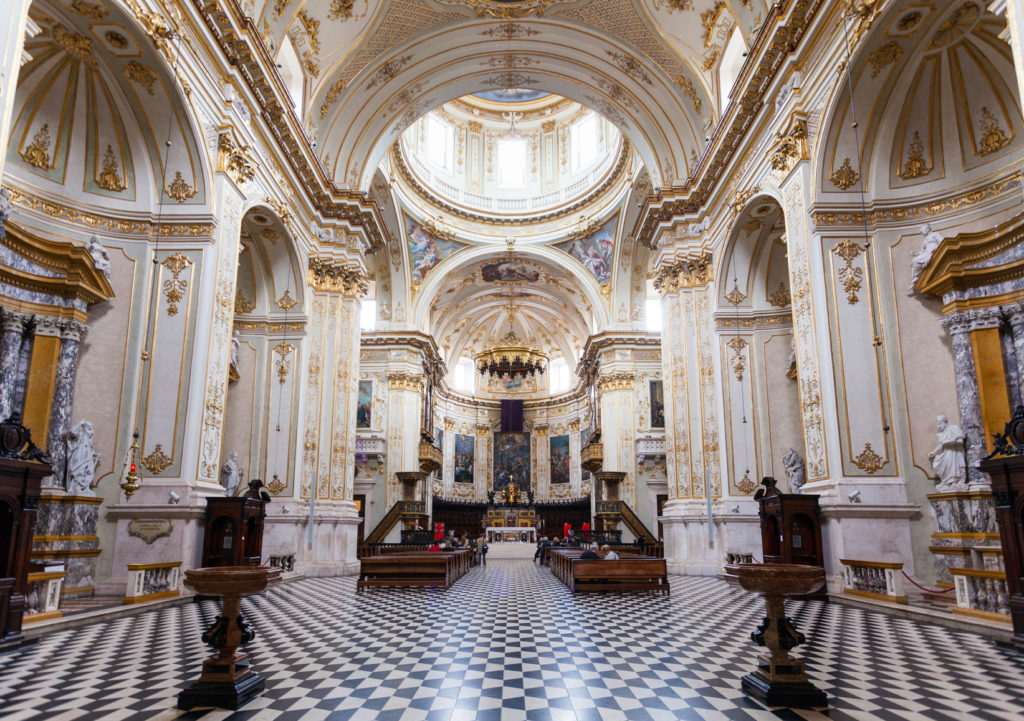 Close to the Cathedral lies the beautiful Basilica of Santa Maria Maggiore. A study of Italian architecture through the ages, the Basilica was originally built in 1137 with Romanesque, Gothic and baroque elements all added at different times throughout its history.

The Cappella Colleoni lies just beyond the Basilica. This stunning mausoleum was built in the 1470s for the Venetian mercenary commander Bartolomeo Colleoni. The chapel inside is stunning with a fresco painted on its dome by the rococo artist, Giambattista Tiepolo.

Other Highlights in Bergamo

There is so much to see in Bergamo that while you might first discover the city on a daytrip or stopover during a tour of the Lombardy region, you’ll find yourself longing to return. Some of the many sights well worth returning for are: 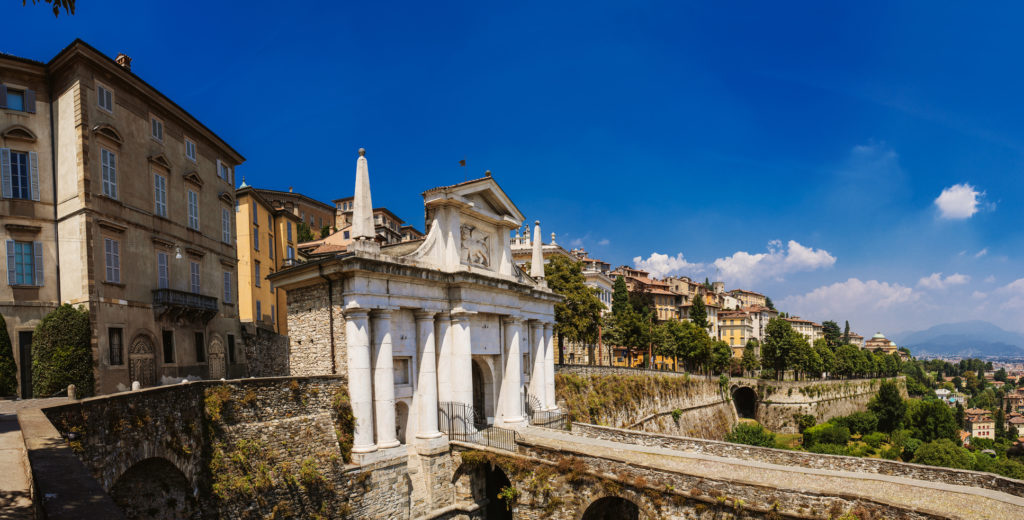 How to Get to Bergamo 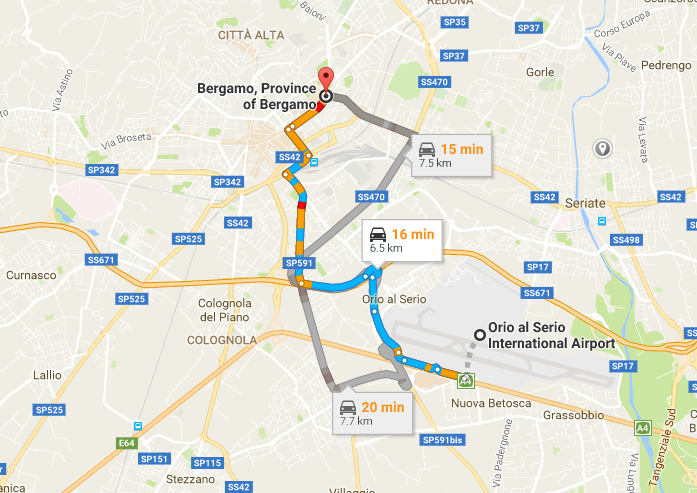 Bergamo Airport is located between Bergamo and Milan, making it the perfect airport for visiting either city. With over 30 flights a week from London on airlines including Ryanair, Alitalia, Lufthansa and Air France, it is a convenient destination whether you want a city break or a more prolonged stay. Book an airport transfer with Shuttle Direct before you arrive and a driver will be waiting to take you directly to your accommodation in Bergamo when you touch down.

Petronilla – This comfortable four-star hotel in Lower Bergamo’s historic San Lazzaro district is quirky and friendly with an emphasis on modern art and contemporary style. Free Wi-Fi, a sauna, hot tub and gym are all welcome features, as are the Petronilla’s extensive, homemade breakfasts.

Hotel Piazza Vecchia – To really immerse yourself in the history of Bergamo, stay at the Hotel Piazza Vecchia at the centre of the city’s old town, Città Alta. Set in a fourteenth-century house close to the old town’s most famous square, Piazza Vecchia, the hotel combines Renaissance features with elegant modern luxury.

Antica Dimora – For the ultimate combination of luxury and history, stay at the Antica Dimora; this sixteenth-century palazzo in the Lower Town is a short distance from the funicular leading to Città Alta. The beautiful period furnishings and frescoes in the communal spaces and some of the bedrooms help to recreate the Renaissance charm of this beautiful city.

A leading provider of airport transfers across Europe and North Africa, Shuttle Direct offers a convenient, hassle-free option for getting from the airport to your city accommodation. Whether you choose a group transfer or private vehicle, you can use the easy online booking service before you leave and your driver will be waiting at the airport to take you where you want to go in the city.