Located across the harbour from Toulon in south-eastern France, the town of La Seyne-sur-Mer has long been associated with the shipbuilding industry. The decline in this traditional industry has seen a transformation in its local economy as resources have been diverted into its tourist infrastructure which has culminated in an impressive new cruise terminal to the east of town. Passengers arriving here can easily spend their day in port locally, head across the bay to Toulon or visit a number of interesting destinations to the west including the vineyards surrounding Bandol or the fjord-like coastline near Cassis.

Before arriving in port, passengers should enquire as to whether they will be docking in La Seyne-sur-Mer or across the bay in the Port of Toulon. Nowadays, most larger vessels dock at the new cruise terminal in La Seyne-sur-Mer which lies 2.5km east of town and 4km north of a lovely beach at Plage des Sablettes. Passengers heading into Toulon are transported by shuttle bus or can take ferries across the harbour.

The main airport for passengers travelling to the ports of La Seyne-sur-Mer or Toulon is Aéroport de Marseille Provence which lies 90km to the north-west. Whilst it’s an option to travel from the airport into the city of Marseille then catch a train from Gare de Saint-Charles it’s far more convenient to arrange a private transfer. Shuttledirect provide such transfers from Marseille Airport to La Seyne-sur-Mer and the Port of Toulon as well as to other destinations all along the French Riviera. 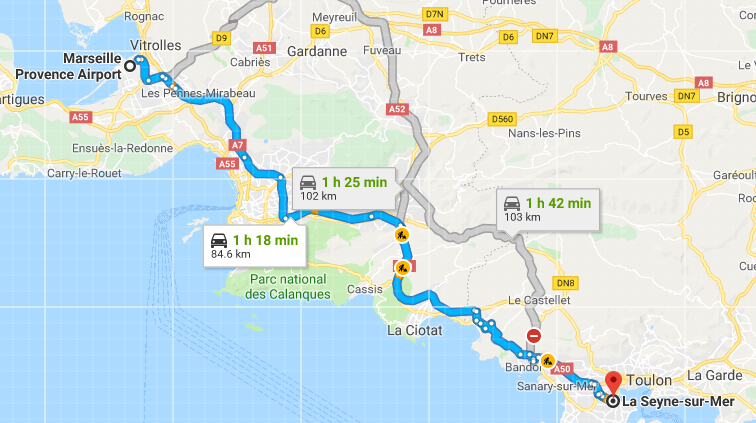 Getting Around in La Seyne-sur-Mer

Most cruise lines will provide shuttle bus transfers for the 7km drive into Toulon otherwise there’s a public bus (number 8 or 18) into the city from the centre of La Seyne-sur-Mer. More convenient is to take a ferry across the harbour from the cruise terminal. If these aren’t provided by the cruise line there are private boat shuttles as well as public water buses departing from different piers.

The walk into La Seyne-sur-Mer from the terminal takes about 30 minutes so many visitors prefer to wait for the number 81 bus into town or hop-on the small tourist train which runs into town and down to the beach at Les Sablettes.

Passengers who are interested in seeing more of the region without taking an official shore excursion can take a 4km taxi ride from the cruise terminal to Gare de La Seyne-Six-Fours. There are trains from this station all the way to Marseille-St-Charles with stops in Bandol and Cassis.

Whilst most passengers from cruise ships arriving in La Seyne-sur-Mer head across the bay into Toulon there are a few who prefer to discover the local attractions. On the edge of town, some 2km west of the cruise terminal, lies the beautiful Parc De La Navale which has been built on the site of former shipyards. Its creation reflects how the local authorities have concentrated on replacing the traditional shipbuilding industry with tourism-related projects. Look out for the shipyard’s Pont Levant to the west of the park. This bascule bridge dates back to 1917 and was built by the same company which built the Eiffel Tower. Visitors can take a lift to the top of the bridge from where there are great views across the harbour. 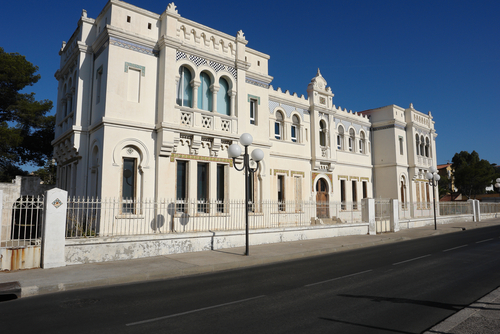 The town’s main sight of historic interest is the 17th century church of Notre-Dame de Bon Voyage (3 Rue Jacques Laurent) whilst a wander around the Marché provençal (Cours Louis Blanc) is popular with visitors from cruise ships. The other main tourist attraction is the 17th century Fort Balaguier which lies 1.5km south of the cruise terminal. Originally built to protect the Port of Toulon it now houses a naval museum.

Continuing further along this coast leads to the Tamaris Beach Resort which is home to some classical villas constructed in the late 19th century and the charming little resort of Les Sablettes. Bus number 83 runs along this stretch of coastline from the port.

The majority of cruise ship passengers who decide to head away from La Seyne-sur-Mer during their time in port simply head across the bay into the city of Toulon. This industrial city with a history of shipbuilding is a major naval base which wouldn’t typically appear on the tourist map of France. However, major investment in the tourism sector has seen a regeneration of its Old Town. Architectural highlights include the historic Cathédrale Notre-Dame-de-la-Seds (55 Place de la Cathédrale) and the Opéra de Toulon (Boulevard de Strasbourg) which is the country’s 2nd largest opera house. The main attraction outside the Old Town is Mont Faron which lies 3km from the Port of Toulon. Vistors can take a cable car to the top of the mountain (584m) from where there are great views over the city and port. 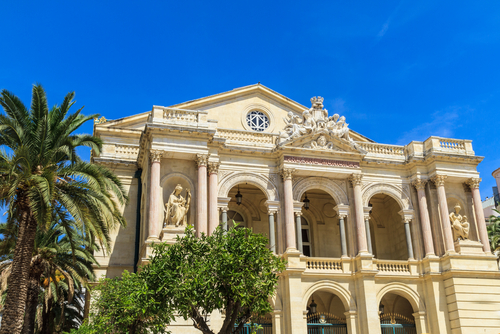 Heading west from La Seyne-sur-Mer there are numerous destinations which are well worth a visit and are accessible by means of local bus, train or on shore excursions offered by your cruise line. Closest of these are the charming fishing villages of Sanary-sur-Mer and Bandol. The latter is well-known for producing some of France’s finest rosé wines so wine tours of the region (especially around Le Castellet) are very popular.

Further west is Cassis from where visitors can take short boat trips along the coast of the Parc National des Calanques as well as take wine tours of another of France’s celebrated wine regions. The city of Marseilles (70km) and university town of Aix en Provence (90km) are other attractions in this region.