Lying on the south-east coast of Cyprus the historic city of Larnaca is a popular holiday destination offering a combination of glorious, sandy beaches and historic attractions. Cruise ships arrive in the city’s busy seaport which took over much of the trade which had previously gone through the port city of Famagusta to the north before the Turkish invasion of 1974.

Located in the centre of town just north of the yacht marina, the Port of Larnaca is the second largest in Cyprus. Whilst Limassol remains the preferred destination of the cruise lines a major project has been announced which aims to make Larnaca one of the main ports of the Eastern Mediterranean.

On arrival cruise ship passengers can leisurely stroll the short distance to the Phinikoudes Promenade and the Old Town in 20 to 30 minutes. Alternatively, you can take the ship’s shuttle transfer from the port into town or hop into one of the many taxis which wait for passengers just outside the port gates. 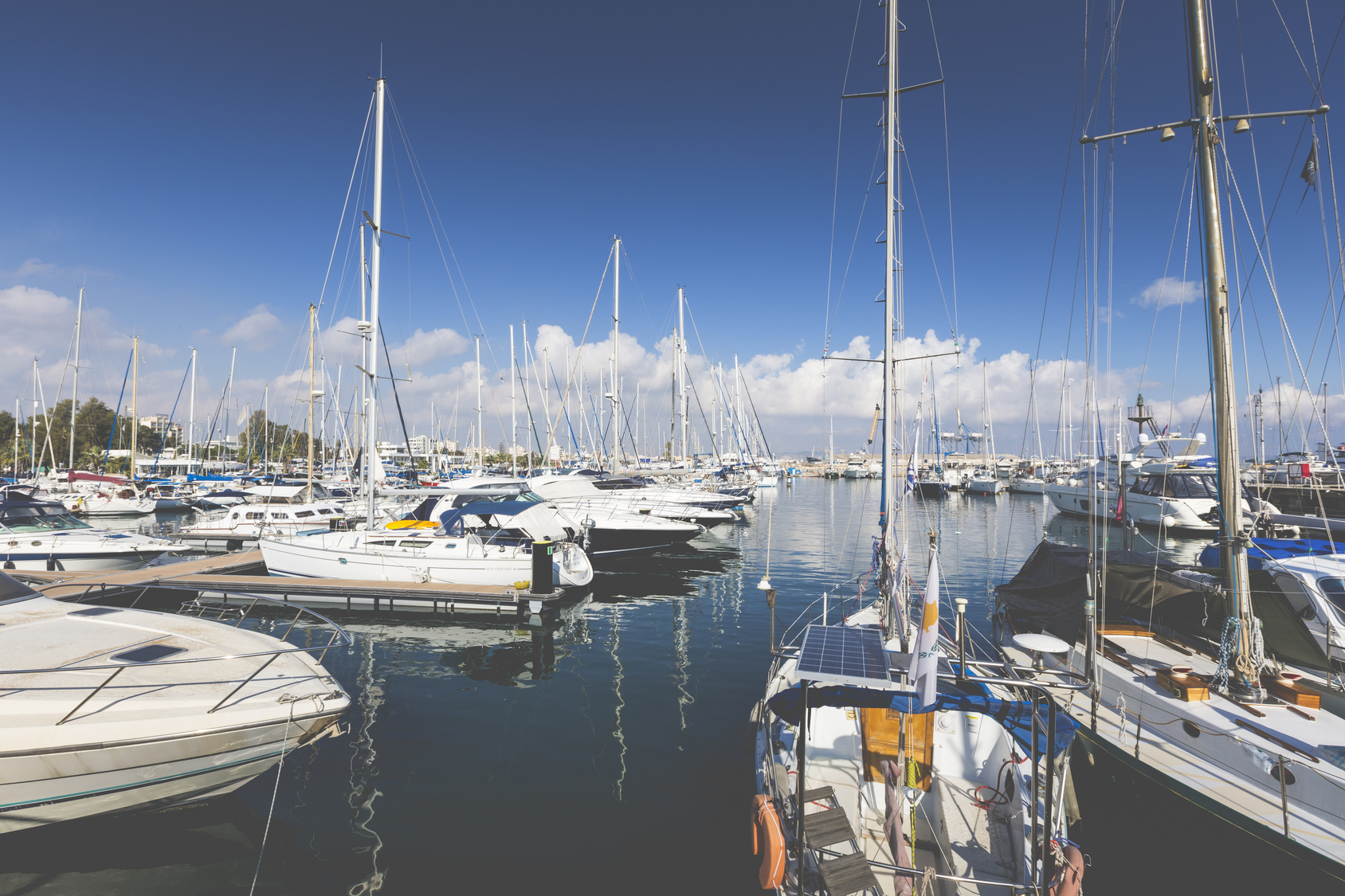 Larnaca International Airport lies less than 10km south of the port area. It underwent major redevelopment after the Turkish invasion of 1974 when the airport in Nicosia was closed. More recently it has seen further, much-needed, upgrades to allow it to cater for the 5 million holidaymakers who pass through its terminals every year. Cruise ship passengers beginning or ending their voyage in Cyprus can easily travel to or from Larnaca (or Limassol) by means of taxis or shuttle buses. Alternatively, journeys can be pre-booked with Shuttledirect who provide private transfers from both Larnaca and Limassol Airports. 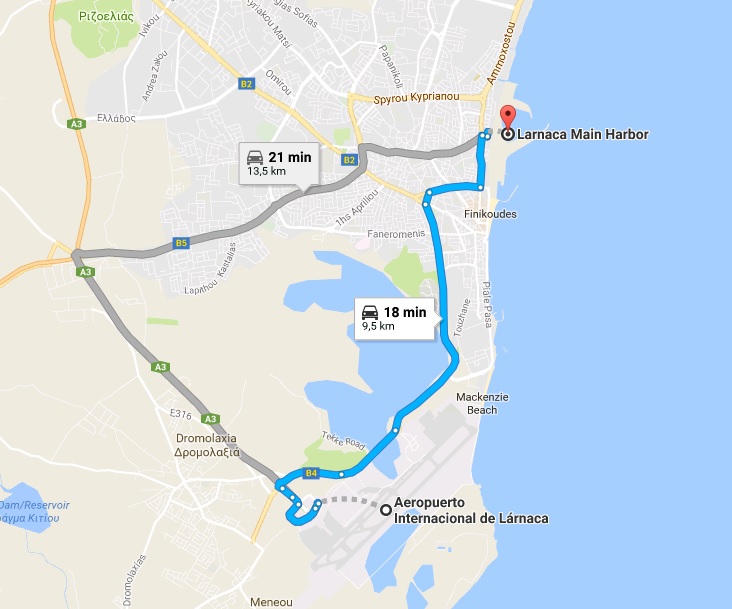 Cruise ships visiting Larnaca dock in the centre of this modern holiday resort, close to the beautiful Phinikoudes Promenade. This long seafront, lined with palm trees, is often filled with families taking their afternoon stroll and local people enjoying a glass of wine at one of its many tavernas.

To the south of the promenade lies Larnaca Castle which is one of the city’s main attractions. This historic building dating back to the 12th century now serves as a museum and occasionally hosts open-air theatre events. Nearby in the old Turkish Cypriot quarter you can wander around a number of historic buildings including Ayios Lazaros Church. About 3km further south is the lovely Mackenzie Beach which is an ideal place to go for a dip on a hot, Cypriot afternoon. 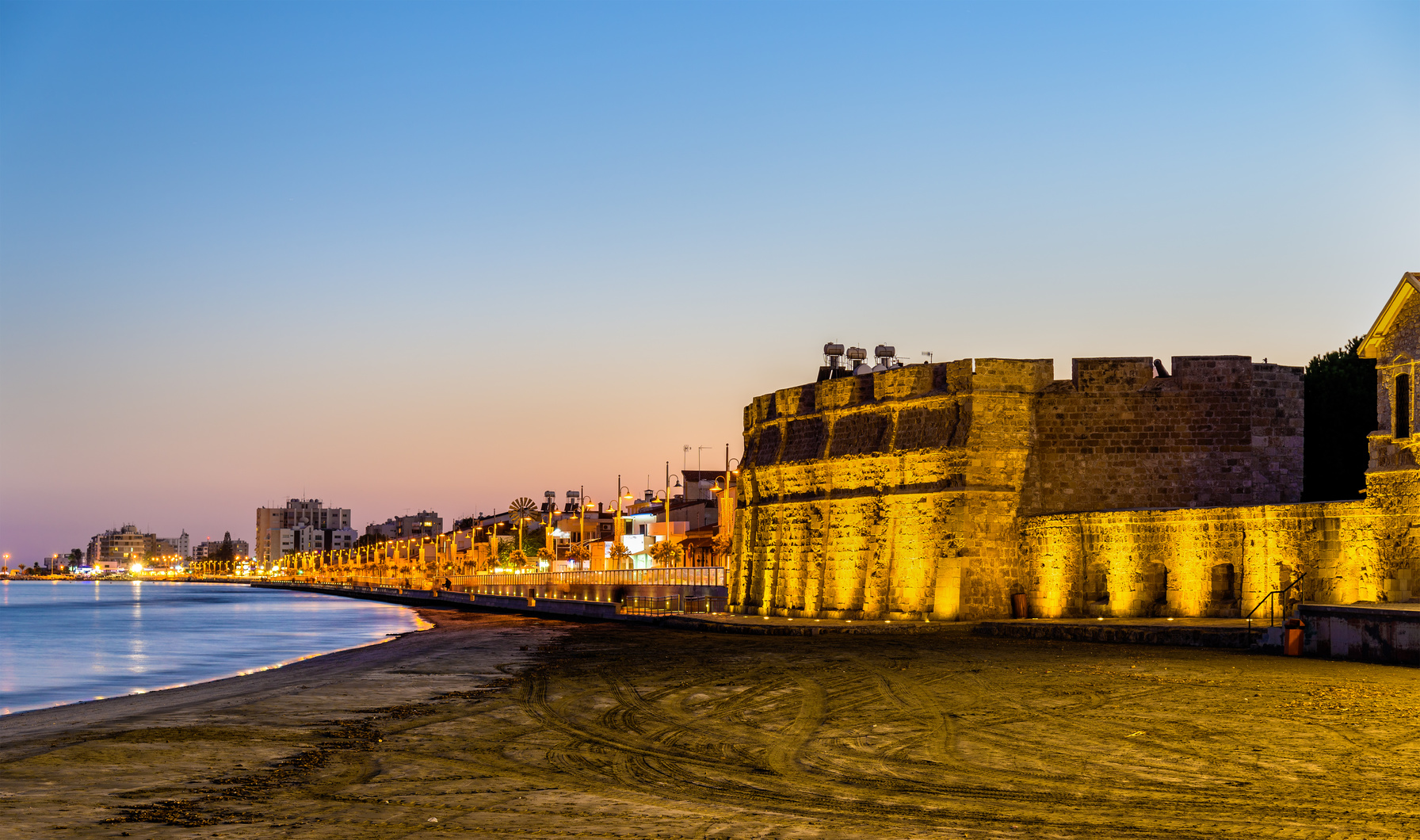 Insider Tip: The delightful Europe Square in Larnaca is surrounded by British colonial buildings from the 19th century. If you can get there for 10am there are free guided walking tours of the city departing from outside the Tourist Information Office which provide a fascinating insight into the island’s history.

Just inland from Mackenzie Beach and next to the airport is the Larnaca Salt Lake which is a well-known spot amongst birdwatchers who flock here during the winter months to see the visiting flamingos. On its southern shore is the Hala Sultan Tekke Mosque which is regarded as one of the holiest sites in Islam.

Famagusta: Approximately 70km to the north of Larnaca lies the port city of Famagusta. Thanks to its deep water harbour this port was once an important stopping off point for merchants trading on the Silk Route between Europe and the Far East. Even as recently as the 1970s the city was a stylish Mediterranean holiday destination attracting wealthy visitors from all over the continent. Then in July 1974 Turkish forces invaded the city following a Greek military coup in the name of protecting Turkish Cypriots. Further Turkish military incursions forced the majority Greek Cypriot population to flee their homes and they have never been able to return to this day. Visitors are allowed to cross the border (with their passports) to see the abandoned remains of historic buildings and formerly glamorous hotels. Many of the tour guides on this excursion were children back in 1974, their tales represent a woeful episode in Cypriot history. 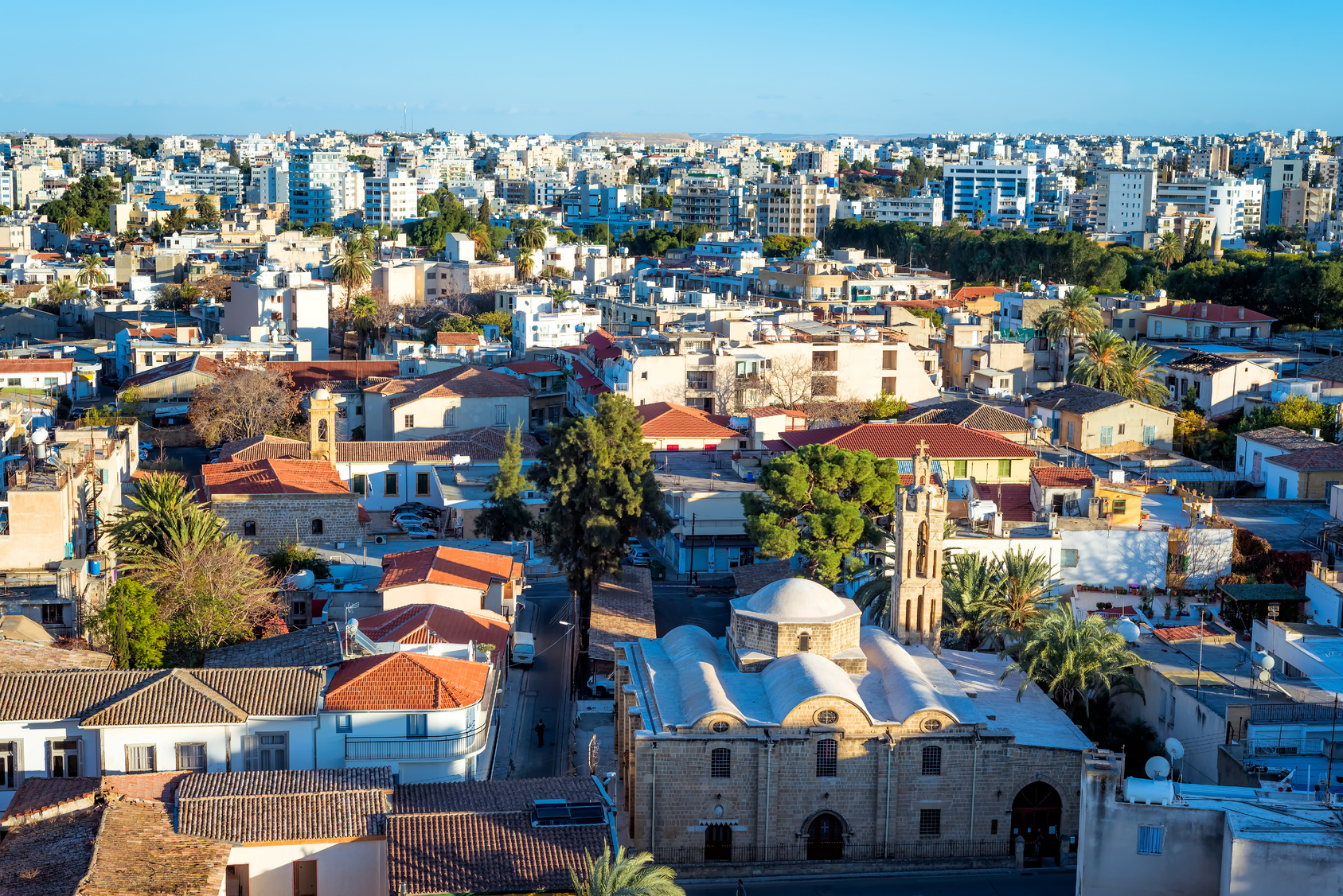 Nicosia: 55km north-west of Larnaca is the city of Nicosia which has been the island’s capital since the 10th century. Following the Turkish invasion in 1974 the city was divided into a Turkish and a Greek part making it the world’s last remaining capital city which is divided between two countries. Visitors from Larnaca can wander around the historic attractions of the Greek sector without any problem but will need a passport to cross the border into the Turkish part of the city.

A number of other attractions around the island include the impressive archaeological site of Kourion and the Knights Templar Castle of Kolossi. The island is also home to UNESCO World Heritage Sites in Paphos and Khirokitia. These sites are more easily accessible from the cruise port of Limassol which lies 75km to the west of Larnaca.

One Night in Larnaca

If your cruise itinerary includes an overnight stay in Larnaca you should head for Phinikoudes where you can enjoy an early evening apÃ©ritif of retsina or ouzo before dinner. Recommended places to eat in this part of town include a modern restaurant called Ocean Basket (Leoforos 8) which is popular for its seafood dishes. If you’re more of a meat lover you should try the nearby Hobo’s Steak House (14 Athinon Avenue). For a more authentic Greek experience take a 15 minute taxi ride to Kazani Traditional Tavern (28th October, No 5, Aradippou) to the north-west of the city. This is a delightful village restaurant serving a fine range of local cuisine. 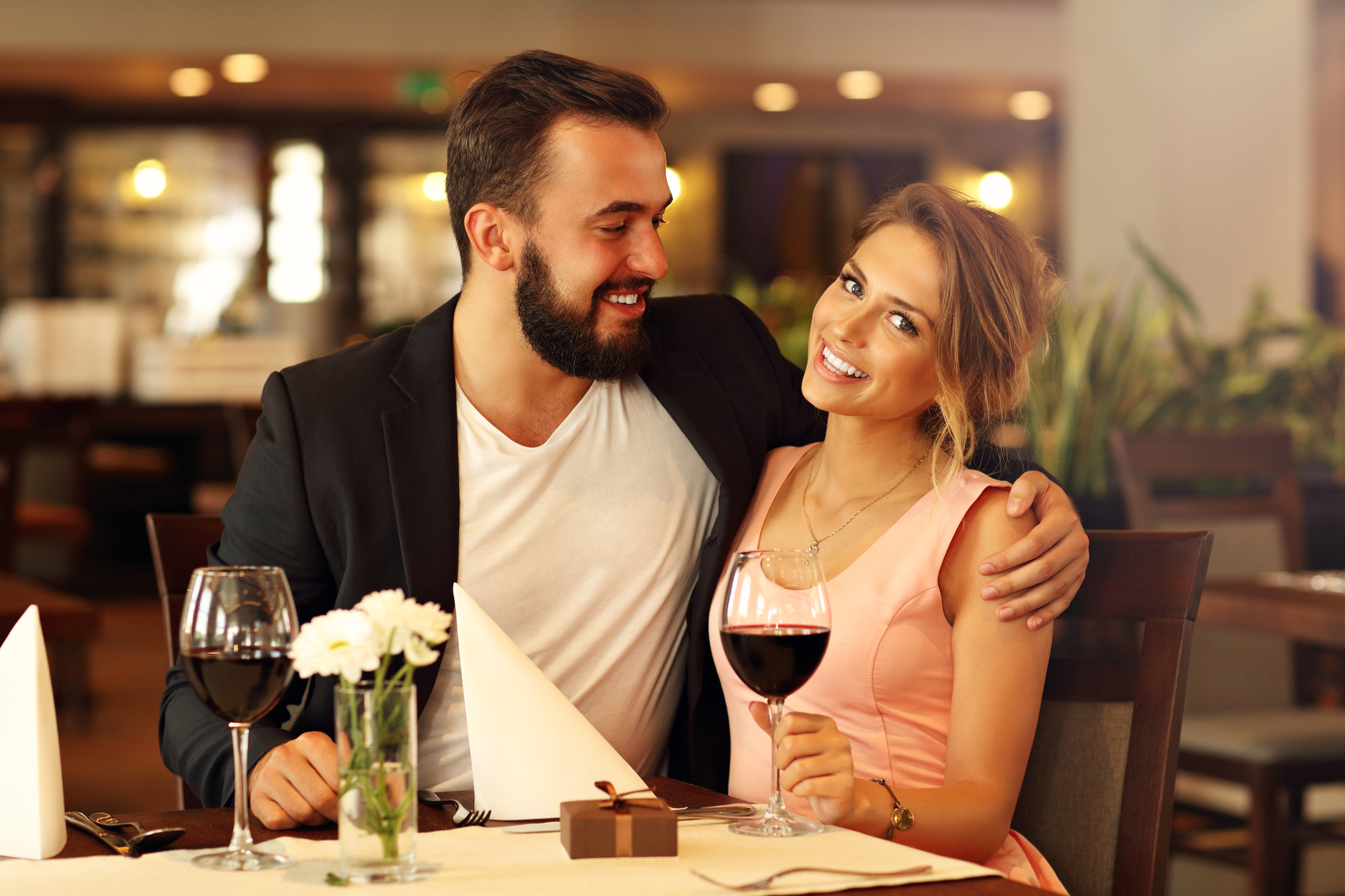