The city of Palermo lies on the north-west coast of Sicily in southern Italy. With a history dating back to the 8th century BC it has been home to numerous civilizations whose legacy can still be seen in the architecture of many of the capital city’s historic buildings. Whilst these beautiful churches and palaces in the historic centre represent Palermo’s main tourist attractions there are also some fairly ugly buildings around town. These structures appeared in the post-war period following the heavy allied bombing campaign which destroyed much of the city. With a metropolitan population of around 1.2 million Palermo can be a fairly chaotic destination which visitors tend to either love or hate.

Cruise ships visiting Palermo dock at the ‘Stazione Marittima’ which lies approximately 2.5km north-east of the city’s historic centre. First impressions of the city can be a little overwhelming as passengers are confronted with a wall of people offering transport and tourism services to new arrivals. It’s well worth having a plan for your day in port before arriving in Palermo so as not to be caught off your guard by any of these operators. 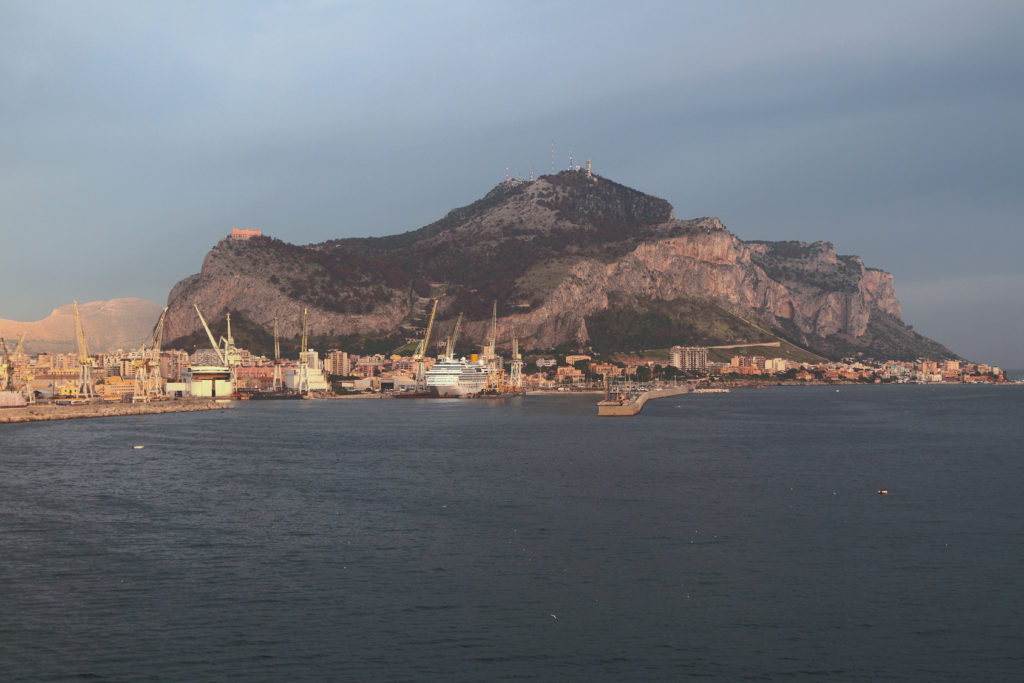 Passengers who are meeting or leaving cruise ships Palermo will most likely be travelling through Palermo Airport which lies 30km west of the port. There are frequent trains from the airport to Palermo Centrale railway station and an airport bus which runs into the city centre. Taxis are notorious for overcharging customers travelling from the airport so you’re better off pre-booking a private transfer from Palermo Airport with a reputable company such as Shuttledirect. They will charge you a fixed price in advance and have a vehicle waiting for you on arrival. 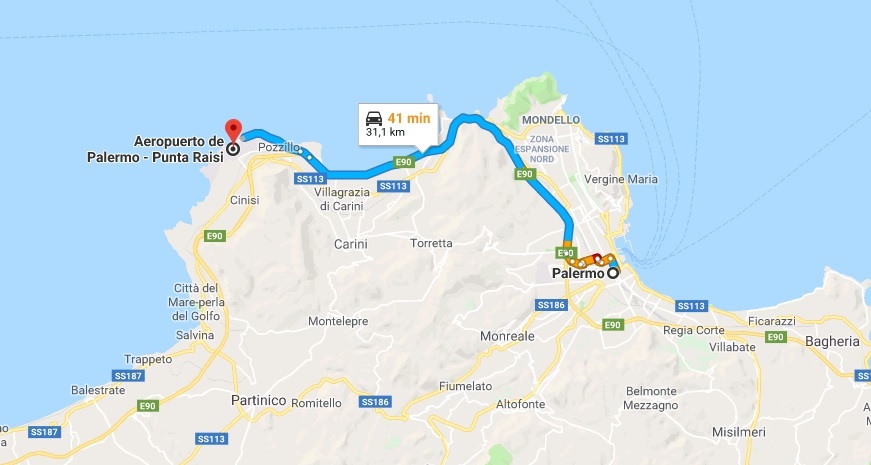 Getting Around in Palermo

Most of the city’s attractions are within walking distance of the port area although you might prefer to take a taxi or shuttle bus offered by the cruise line to quickly get you into the historic centre. Some passengers like to take a horse drawn carriage tour of the city which departs from just outside the cruise terminal. Taxis will also offer city tours by the hour. In both cases be sure to fix a price before agreeing to the excursion. There’s also a ‘hop-on, hop-off’ tourist bus which departs from just outside the terminal although this service generates quite mixed reviews within the cruise ship community.

Be warned that as soon as you step beyond the port area you’ll be met by a loud and fairly chaotic city where you need to be very careful when crossing roads. In addition you should be extra vigilant in looking after your personal belongings. Crime against tourists in Palermo isn’t violent but pickpocketing and bag-snatching is far too common.

The Cattedrale di Palermo is one of a number of important religious buildings in Palermo. It was built under Norman rule in the 12th but has seen many architectural changes over the centuries. Visitors who are fit enough should buy a ticket to climb the steep set of stairs to the rooftop where views across the rooftops of Palermo are spectacular.

Standing on Piazza Bellini, a short 10-minute stroll to the east of the cathedral is the unfinished Chiesa di San Cataldo which is easily recognisable thanks to the red domes on its roof. Standing right next to it is La Martorana (Chiesa di Santa Maria dell´Ammiraglio) which was originally a mosque. UNESCO recently added these churches together with San Giovanni degli Eremiti and the Cathedral to their list of World Heritage Sites in recognition of their Arab-Norman architecture. 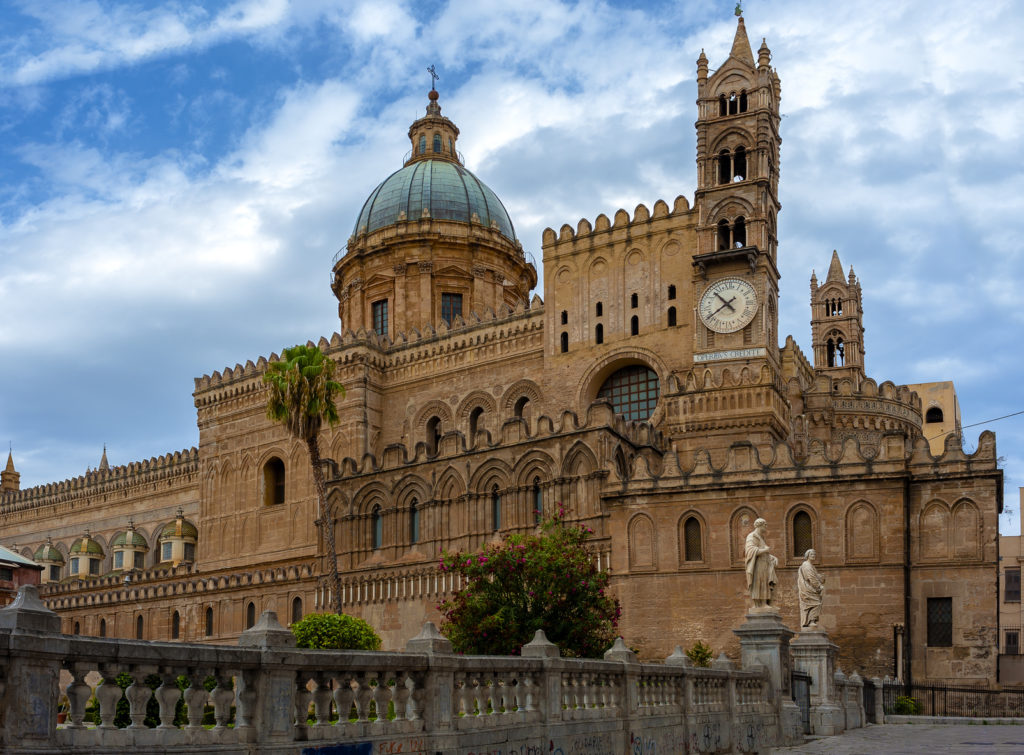 Shopping Tip: If you want to do some shopping during your day in port you should head for Via Liberta which is home to many boutiques representing the top Italian fashion labels. Closer to the port is Tre Erre Ceramiche (Via Emerico Amari, 49) which is known worldwide for its high quality ceramics.

Also on this list of World Heritage Sites are a number of palaces which include the Palazzo dei Normanni which served as the seat of the Kings of Sicily under Norman rule. This Royal Palace stands on the city’s highest point just 1km south-west of the Cathedral and is now home to the Sicilian Parliament. The architectural highlight of this impressive 12th century structure is the Cappella Palatina which originally served as a royal chapel.

As well as being home to this fine selection of beautiful churches and palaces Palermo also boasts the island’s most important archaeological museum. The highlight of a visit to the Museo Archeologico Regionale Antonio Salinas (Via Bara all’Olivella 24) is the display of Punic and Ancient Greek art which is one of the finest in the country. Art lovers will also appreciate a visit to the 15th-century Palazzo Abatellis (Via Alloro, 4) which houses Sicily’s finest regional art museum.

Insider Tip: Whilst you’ll find plenty cafés and local restaurants selling traditional Sicilian dishes all over the city a nice place to go for lunch is around Piazza Marina. Located next to the sea just south of the port these lovely gardens are a great place enjoy some peace and quiet away from the noise of the city.

Other attractions that are worth a visit are the historic Botanical Gardens (Via Lincoln, 2) which serve as a research facility for the University of Palermo and the Catacombe dei Cappuccini (Piazza Cappuccini, 1). This rather disturbing tourist attraction is home to a number of well preserved mummies of deceased monks.

Whilst there are enough sights worth visiting in Palermo itself there are also a couple of towns nearby which are well worth including in your itinerary if your time in port allows:

Monreale Located just 12km inland from the Port of Palermo is the town of Monreale which is famous for its magnificent cathedral. Considered one of the most beautiful in all of Italy, this Norman-Byzantine structure is one of the nine historic sites in and around Palermo which have been recognised by UNESCO. Cruise ship passengers can get there on excursions offered by their cruise line or by taking bus number 389 from Piazza Indipendenza. Local taxis will also transfer visitors from the cruise port to Monreale, just be sure to confirm a price before departing. 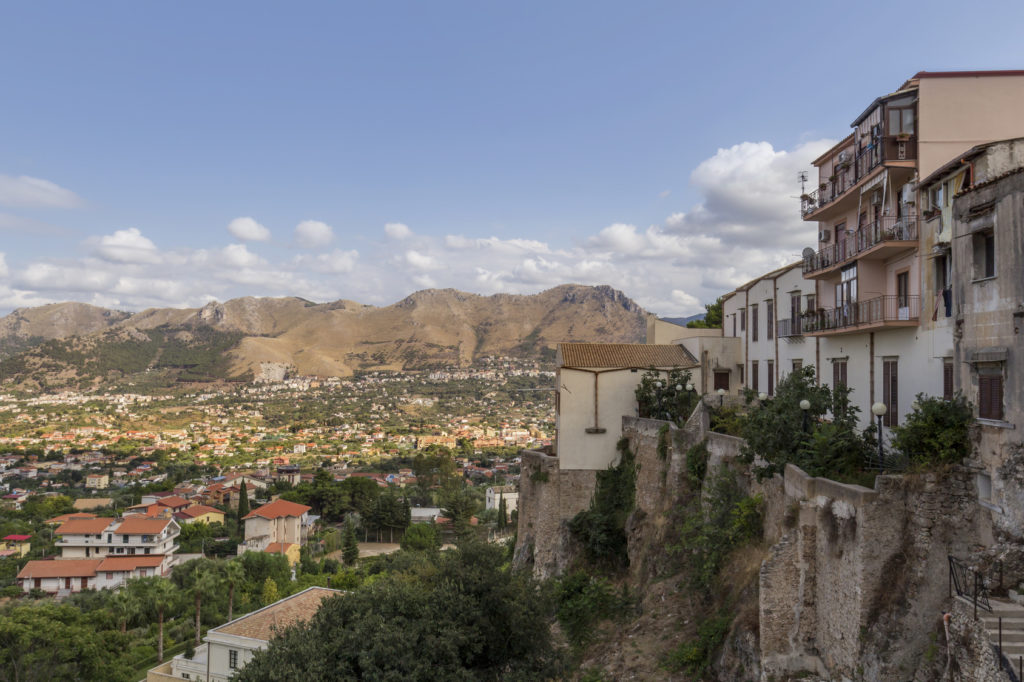 Cefalu: Located 80km east of the port is the beautiful beach town of Cefalu which is one of the region’s main tourist destinations. In spite of its small size this former Norman fishing village attracts holidaymakers from all over the country. Its main attraction apart from the glorious beaches is its 12th century Cathedral which is yet another building which features on the list of local World Heritage Sites. There are trains to Cefalu from Palermo Centrale but most cruise ship passengers visit as part of an organised shore excursion.