Located on the Ligurian coast of Italy between Monaco and Genoa, Savona has served as an important port since it was occupied by the Romans in 180 BC. During the Middle Ages it was regarded as a significant maritime power before being defeated by the Genoese in the early 16th century.

In post-industrial Italy Savona developed a flourishing iron industry which ensured that visitors to the Italian Riviera kept well away as they headed for the coast’s sandy beaches well away from the city’s shipyards. More recently the city has seen something of a renaissance thanks largely to the redevelopment of the port area which encouraged Genoese company, Costa Cruises, to make Savona its home base.

There are enough historic attractions and stylish cafés in Savona to allow cruise ship passengers to enjoy a day in port. Overnight visitors can also arrange short trips along the coast to attractive destinations such as Genoa and Portofino or simply head for one of the region’s beach resorts which attract holidaymakers from all over Italy.

As the home port of the Costa Cruises, Savona is one of Italy’s busiest cruise ports with more than 900,000 annual visitors. Ideally located close to the historic city centre the port can accommodate three ships at the same time and houses the modern Palacrociere cruise terminal which is well equipped with facilities. From the cruise port passengers can take a pedestrian bridge across the marina from where all the main tourist attractions are easily accessible on foot.

There is no airport in Savona so most passengers beginning or ending cruises there normally fly into or out of Milán-Malpensa Airport which lies 190km to the north. Shuttle transfers are available from the airport to Milano Centrale train stations from where there are some direct trains to Savona and others which require a change in Genoa. Far more convenient is to pre-book a private airport transfer from Milan Airport with Shuttledirect. 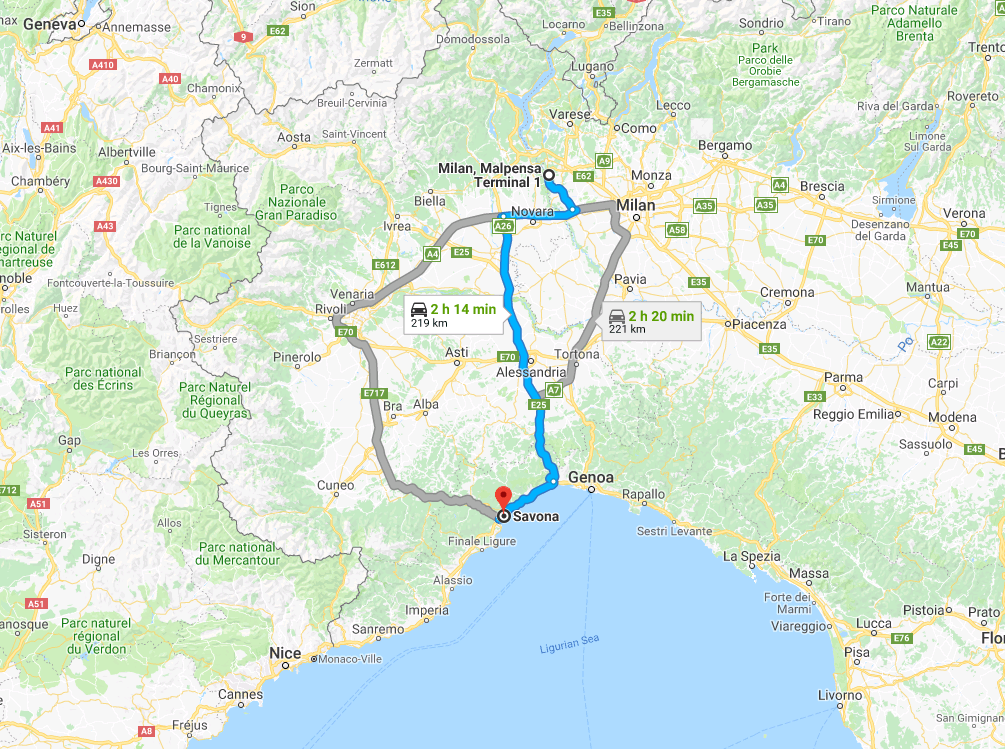 A closer option is Genoa’s Cristoforo Colombo Airport which is only 40km from the Port of Savona but caters for far fewer incoming flights than Milan. Shuttledirect also provide transfers to Savona from Genoa Airport as well as from Nice Côte d’Azur Airport (160km) and Turin (160km) for passengers who can’t find convenient flights to Milan or Genoa.

Overlooking the harbour and cruise terminal from the west is the Torre Leon Pancaldo which stands at the entrance to the city’s Old Port. Built in the 14th century and named after Ferdinand Magellan’s navigator (who was born in Savona) it is considered to be the main symbol of the city. From the tower you can walk along Via Pietro Paleocapa which leads into the Old Town which is home to many historic buildings and attractive cafés such as the historic Caffe del Duomo (Via Alessandro Manzoni). This is a nice place for a coffee break before heading for the cathedral area.

The main tourist attraction in the Old Town is the Cappella Sistina which is next to the Cattedrale dell’Assunta on Piazza del Duomo. This small but beautiful chapel was built Francesco della Rovere who was born locally. He would later become Pope Sixtus IV (1471-1484) and is responsible for having commissioned the better known Sistine Chapel in Rome. His nephew Giuliano della Rovere followed in his footsteps and served as Pope Julius II (1503-1513) making Savona the only world city to have been the birthplace of two popes.

Insider Tip: For a lunchtime treat head for Alalunga Pescatori Savona (Via Calata Pietro Sbarbaro) on the harbour where they fry fish on their boat and serve it to customers in a cone. 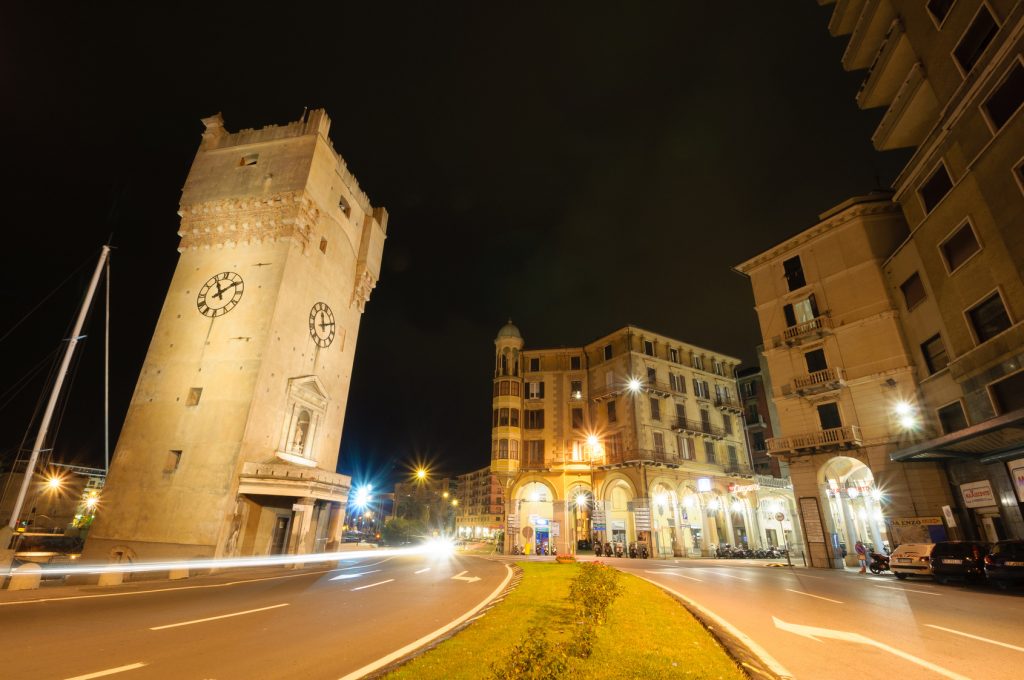 Just south of the cruise port is the Fortezza Priamar which was originally built by the Genoese after they conquered the city in 1528. Today it is home to Savona’s Archaeological Museum. The 12th century Torre del Brandale which overlooks the marina is another landmark worth looking out for.

Passengers wanting to enjoy a refreshing dip after sightseeing in the Centro Storico can do so from the sandy beach or at the public swimming pool which both lie just south of the Priamar fortress. Alternatively, you can hop into a taxi and visit the beautiful Playa de Lunabeach which lies 12km south of the cruise port in Bergeggi Natural Park.

With Savona serving as a home port for Costa Cruises some passengers will find themselves with time to spare for a shore excursion at the beginning or end of their cruise. The most popular destinations are to the UNESCO World Heritage City of Genoa which lies 50km to the east and to the stylish resort of Portofino which is a further 30km along the same coastline.

If official shore excursions aren’t made available by your cruise line there are frequent trains from Savona train station (2km west of the cruise port) to Genoa. Both Genova Piazza Principe and Genova Brignole train stations are convenient for visiting the city’s historic centre. Passengers heading for Portofino need to get off the train at Santa Margherita Ligure-Portofino train station from where a local bus runs into town. 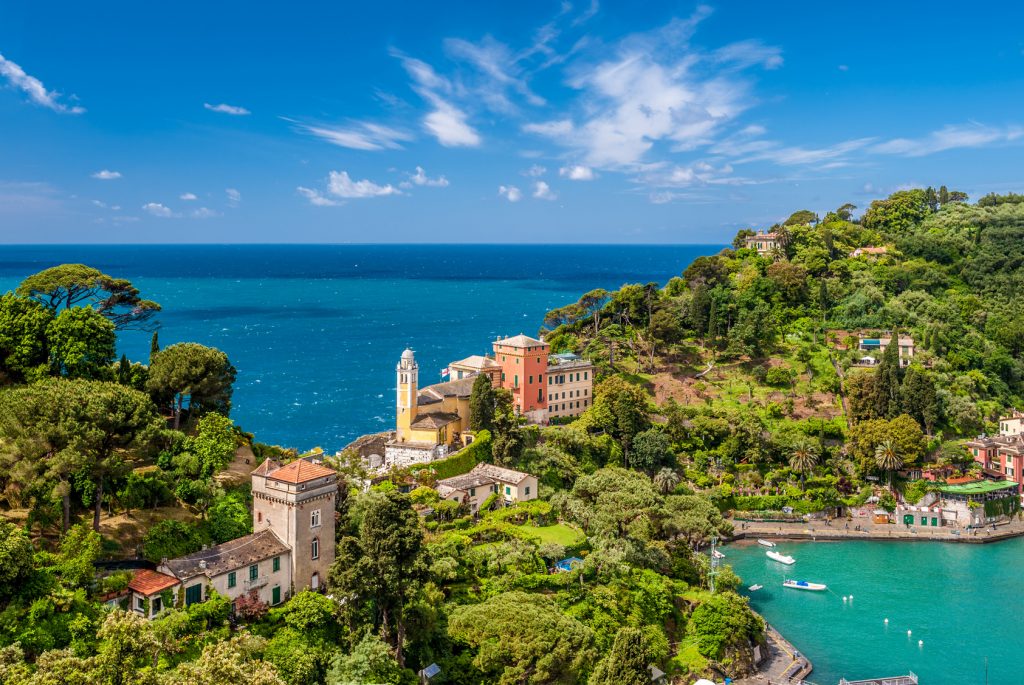 One Night in Savona

Cruise ship passengers who are beginning or ending their cruise in Savona will find a selection of modern hotels in the historic centre or can stay in a beach hotel at the Playa de Luna resort to the south. A little further south but still only 15km from the cruise port is the lovely resort of Spotorno which is highly recommended for a few nights’ stay.

An evening in Savona is best spent dining on Ligurian seafood dishes at a local restaurant such as Ristorante Verso il Maestrale (Calata Pietro Sbarbaro) which overlooks the harbour. Alternatively, you can head for one of the city’s many family-run trattorias such as Pizzeria Vesuvio (Piazza Goffredo Mameli) which serves excellent pizzas and pasta dishes to a mainly local clientele.